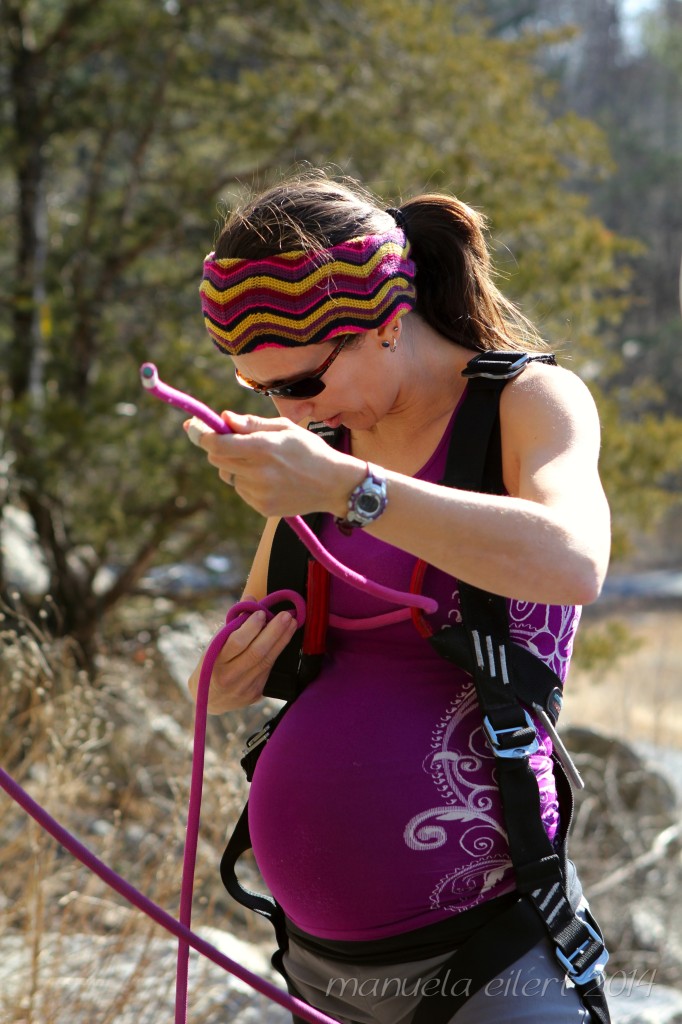 It was Rocky Face, Round 4 for our family this past weekend.  This little quarry crag has become our local hangout of late.  Even though it’s a farther drive than other local crags, the zero approach factor is quite appealing at this point in my pregnancy.  Add that to the fact that it bakes in the sun and even has routes easy enough for my 3 year old to enjoy, and it’s the perfect winter destination for our family right now!

After one trip to get our bearings, and another two trips to tick off the classics on the middle wall, our next order of business was exploring the slabs over on the right side.  This area is home to the tallest routes on the wall, probably around 80 feet or so.  It’s also an area with a lot of new development going on – in fact, local developers Ryan Beasley and Chad Hilliard established a new route while we were there, and were kind enough to let us take a couple of burns on it at the end of the day.

The climbing on this side is shockingly different than the edgy face climbing just around the corner.  Most of these routes start out by pulling over a large overlap type feature down low, and all feature a large section of slab climbing with face holds few and far between.  Some routes finish at a ledge about 50 feet off the deck, while a few keep on truckin’ up a vertical, edgy face. 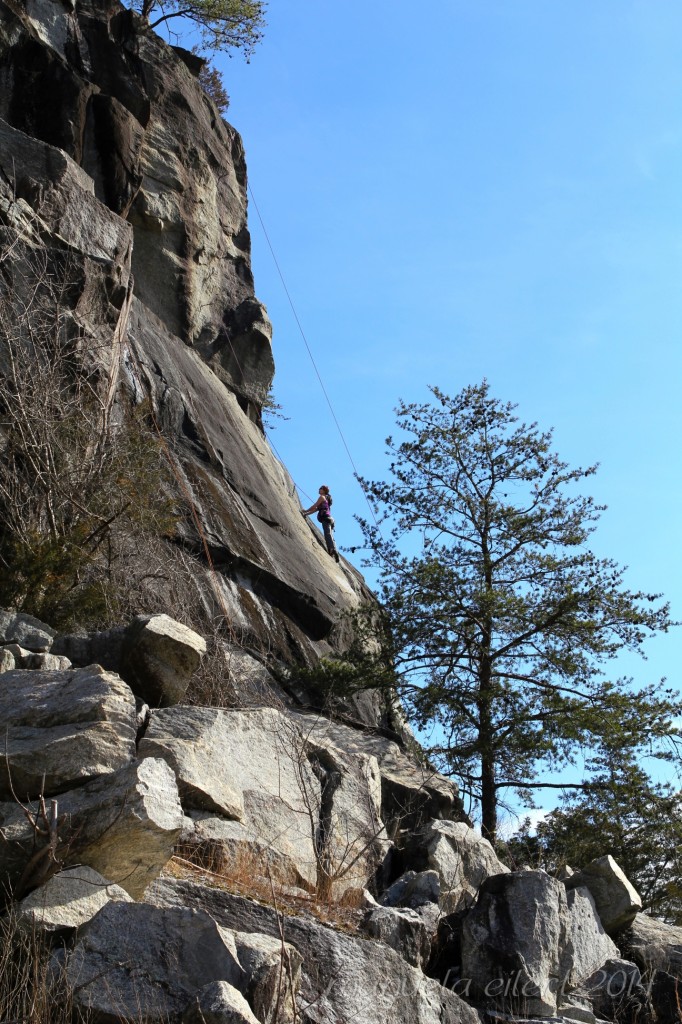 Me and Baby Z warming up on the opening slab of Hidden-mite (5.11) 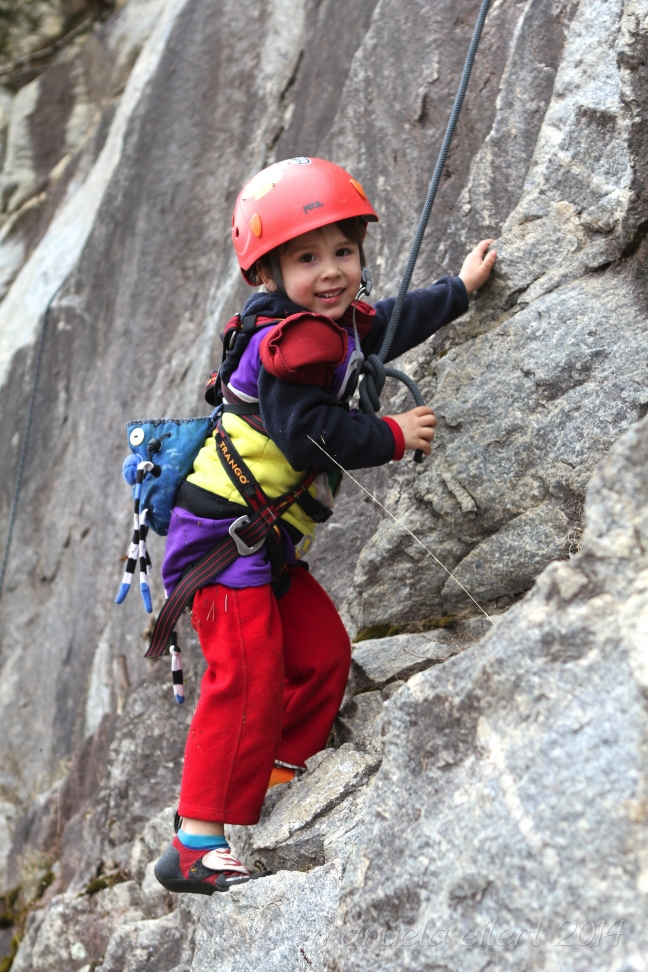 While our last visit to Rocky Face had me feeling confident and strong, this trip left me feeling like I was in the latter stages of pregnancy…which technically I am at this point, so I suppose that’s okay!  Coming off a couple of really good sessions in the gym earlier this week, I was a little disappointed at how difficult everything felt.  It’s been a while since I’ve done any sort of sustained slab climbing, and I didn’t realize how difficult all that high-steppin’ and smearing would be on my gigantic belly.  It wasn’t that it hurt – none of those achy, sloshy feelings that pushed me away from steep stuff earlier on.  It was more like things felt mechanically difficult – just getting my foot up really high was hard (sometimes I even had to use my own hand to place my foot in the right spot), and then rocking onto said foot took a lot more effort than it ordinarily would have.  Several of the routes had a really long reach or two, and that belly shortened my wingspan even more.

Here’s our order of operations…
Hidden-mite 5.11:  Don’t let the grade scare you off, it was actually a perfect warm-up.  The climbing was no harder than 5.9+/5.10a up until the very last bolt…where a long reach to a hidden hold had everyone in our crew pitching off!  (And if you want to keep the grade moderate, you can step left at the ledge to use some neighboring anchors as intermediates to lower from.)
Somebody Get Me a Beer 5.11:  Very well-defined crux down low pulling over a bulge led to the most sustained slab on the wall.  It took me several tries to figure out beta that would allow me to reach through the crux, but after getting it, I made quick work on the slab. 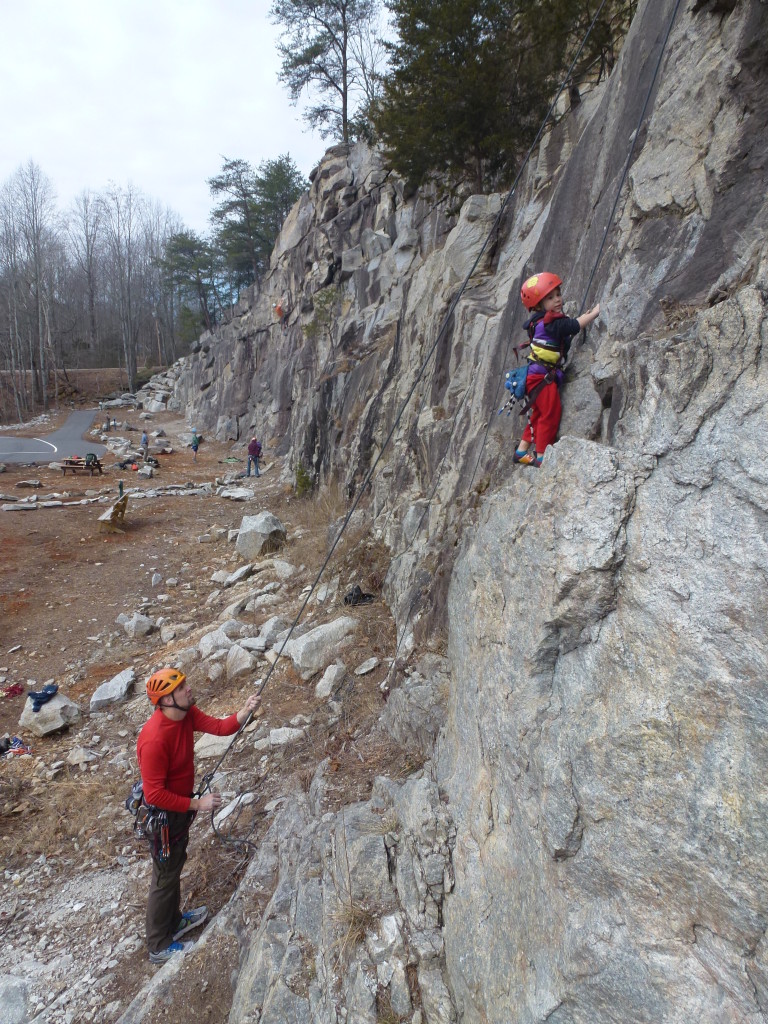 General Lee 5.11a/b:  This one was the most enjoyable for me of the day, as it had more intermediate holds than the others.  I was clean literally until I was reaching for the anchors…definite bummer, but definitely worth coming back to on the sharp end postpartum.
Snakecharmer 5.10:  Maybe all that slab paddling was catching up with me by the end of the day, but I thought this brand new line was pretty darn hard.  I came off pulling the bulge…and then immediately found an undercling that made the move significantly easier.  Oh well, next time! 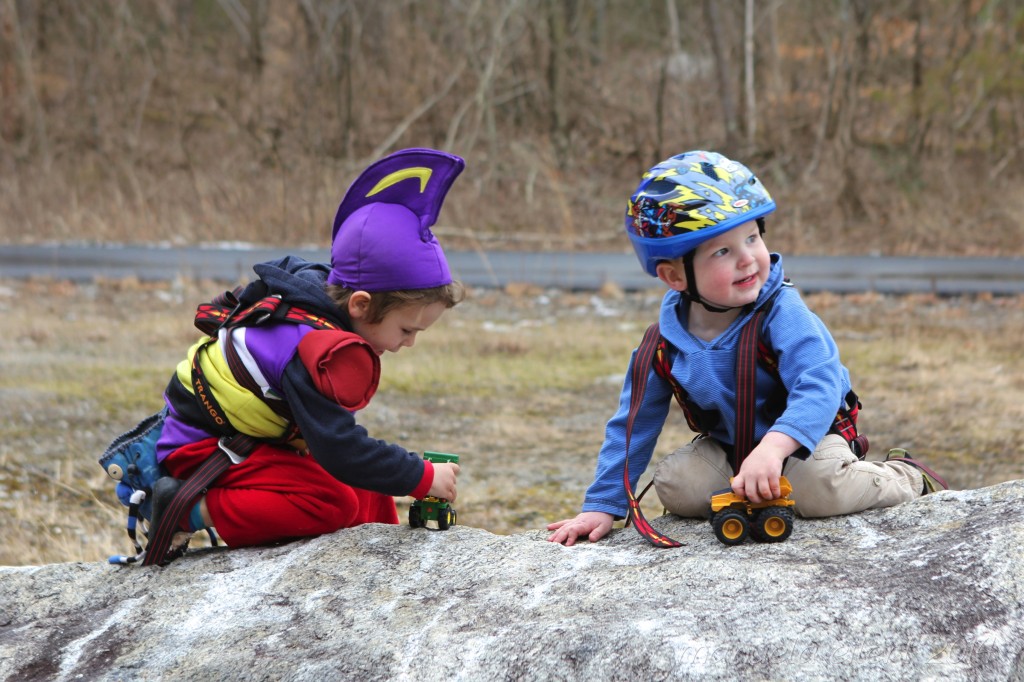 Crag-kiddos representin’ with their matching Trango harnesses as they wait their turn to climb.

I did 4 routes on the day, same number as the last visit…but rather than 4 preggo-points I ended up with 4 preggo hangdogs.  I’d be lying if I said I wasn’t a LITTLE disappointed that I didn’t get ANYTHING clean, but if every day was the best day ever, you’d take them all for granted, right?  But regardless of the (lack of) sendage, I still had a great day.  We made some new friends, caught up with old friends we hadn’t seen in ages, and C crushed his way up a 5.4 (hanging on the rope here and there a bit, but pretty much making all the moves!)

As I get closer and closer to the due date, I find myself imagining what it will be like craggin’ with two small fry in tow.  I know it will be considerably harder, but we’re optimistic we can make it work.  Even if we end up logging less days on the rock in the beginning, I’m looking forward to seeing what adventures are in store for us as a family of FOUR!  For those of you with multiple crag-kiddos, how did you handle the transition from a “double team” to “man to man?” 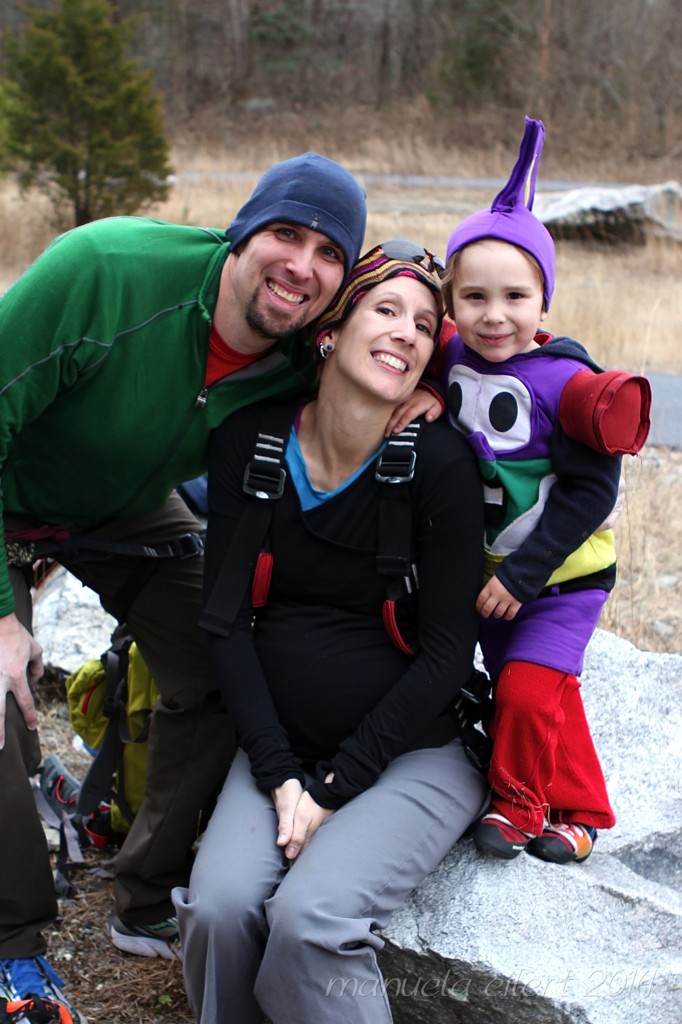