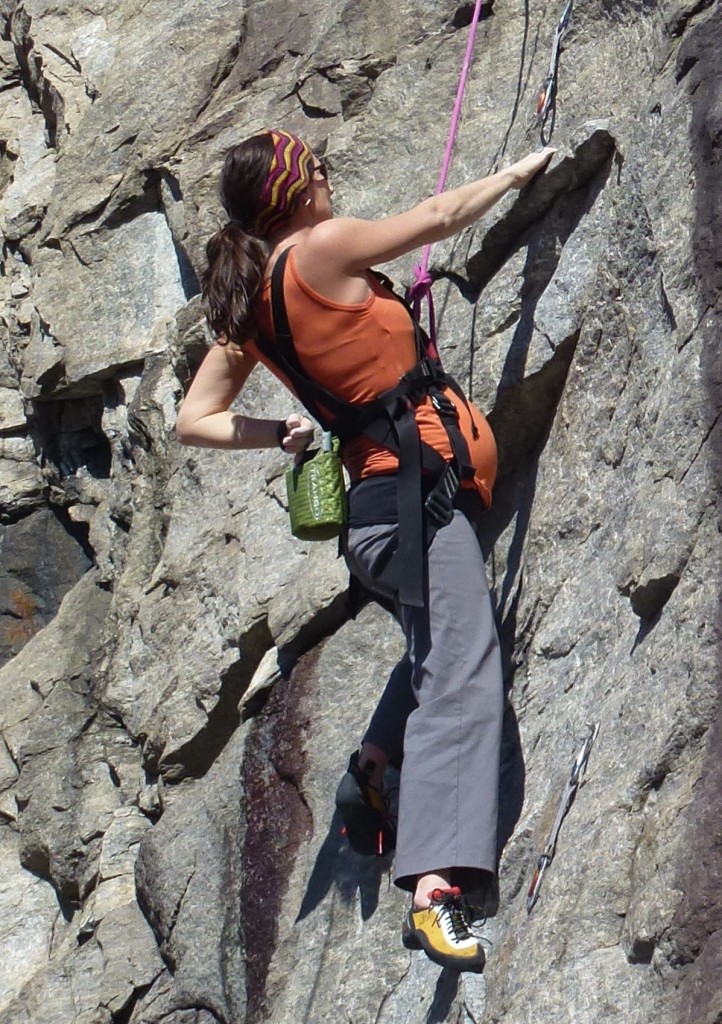 Woo-hoo, any day now!  The nursery is (mostly) ready, there’s a few meals in the freezer, and I am certainly tired of being pregnant…so baby Z, the ball’s in your court now!  Here’s the skinny (that’s a joke since I am definitely large as a barge at this point ;)) on how exercise has been going lately…(previous updates found here, here, here, and here.)

Week 33:  This has been a surprisingly strong week.  I cranked out a hard route at the gym after just a couple of tries and beta refinement.  Then on Monday we spent a day craggin’ at Rocky Face, and I ticked off three 5.11 preggo-points, including one .11c, which is definitely my hardest 3rd trimester send in either pregnancy.  On the running front, the weather was so nice and I felt so good, that I ended up with similar mileage to what I was doing a few weeks ago – 3.7 miles running out of a total of 4 miles!  The only possible explanation I can come up with is that baby seems to be riding a little bit lower these days, which means I’m not as out of breath, and am not constantly plagued by kicks in my rib cage.  I can only assume that breathing easier would make improvements in all of the above possible…but regardless of the reason, I’m thankful for the reprieve!!! 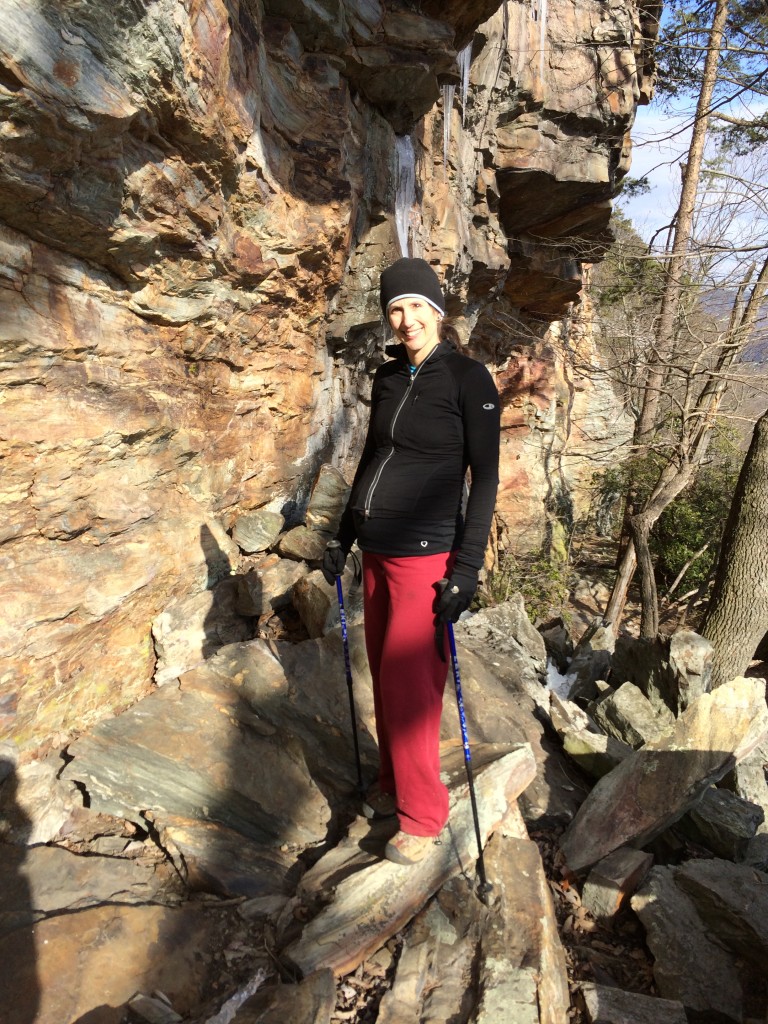 Week 34:  Doctor’s check-up this week revealed that I have gained exactly 20 pounds, which seems pretty good at this point.  Had two 3.5 mile running workouts this week, for the first I was able to run nonstop, and for the second I ran for all but a quarter mile.  Pace is continuing to get progressively slower – not counting the walking, my pace is right at 12-12:15 minutes per mile.  On most non-running days I’m still cruising on the elliptical for 30-35 minutes.  My biggest accomplishment this week was dragging myself to the top of Sauratown Mountain on a frigid special access climbing day (trip report here.)  I was also lucky enough to squeeze in an indoor climbing session with the hubs as well, thanks to some grandparent baby-sitting action.

Week 35:  Good gym session with the hubs this week – my current circuit has been to do a couple of warm-up routes in the 5.10 range, then knock out all the 5.11’s that I can do.  Right now there are 4 – two are .11c, one .11b, and one .11a.  Those routes all feel really solid, and I can do them clean fairly easily…Everything else 5.11 and up (as well as a few 5.10’s) feature at least one move that I can’t do, and I’ve stopped “working” moves at this point – NOT a good strategy for improving your weaknesses as a climber, but a great strategy for a pregnant woman about to pop!  Went outdoor craggin’ on Saturday (trip report here.)  Early in the week I started to get some hip/pelvic soreness, but a visit to the chiro put me back on track.  (The non-pregnant me generally sees the chiro for maintenance every couple of months or so, but during this last trimester I’ve had trouble making it more than 3 weeks without feeling out of whack!)  That being said, I was really excited to get in a solid run halfway through the week – 3.5 miles nonstop, with my pace slow as molasses at 12:20 per mile.  Sometimes I wonder if I could actually walk almost just as fast, but for some reason a slow trot feels a lot easier to me than a forced march at breakneck speed – maybe something to do with taking lots of smaller steps rather than giant strides? 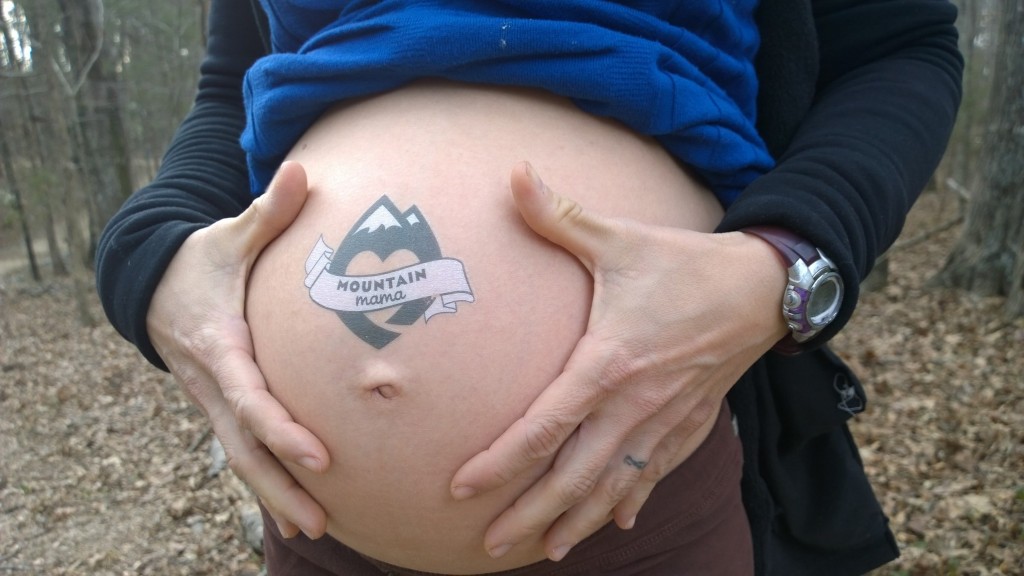 Week 36:  Weather and schedules kept us indoors for climbing sessions this week, and while I was disappointed one of my staple 5.11’s was taken down, I was psyched to be able to onsight the one that was put up in it’s place.  If you’d have told me that I would still be jogging 25 days out from my due date, I’d have thought you were nuts.  But 3.5 miles went down in a slow but steady 43:55 this past weekend.  Honestly I’m not sure what has made the running feel so much more comfortable this time around than with my first pregnancy (when Braxton Hicks contractions and ligament pain forced me to stop sometime around 28 weeks.)  The only difference I can see is that this time around I was in better running shape when I first conceived (meaning more mileage, and at a faster pace), and most weeks in the latter half of this pregnancy I’ve kept my runs to only 1-2 times per week, doing time on the elliptical the other days. 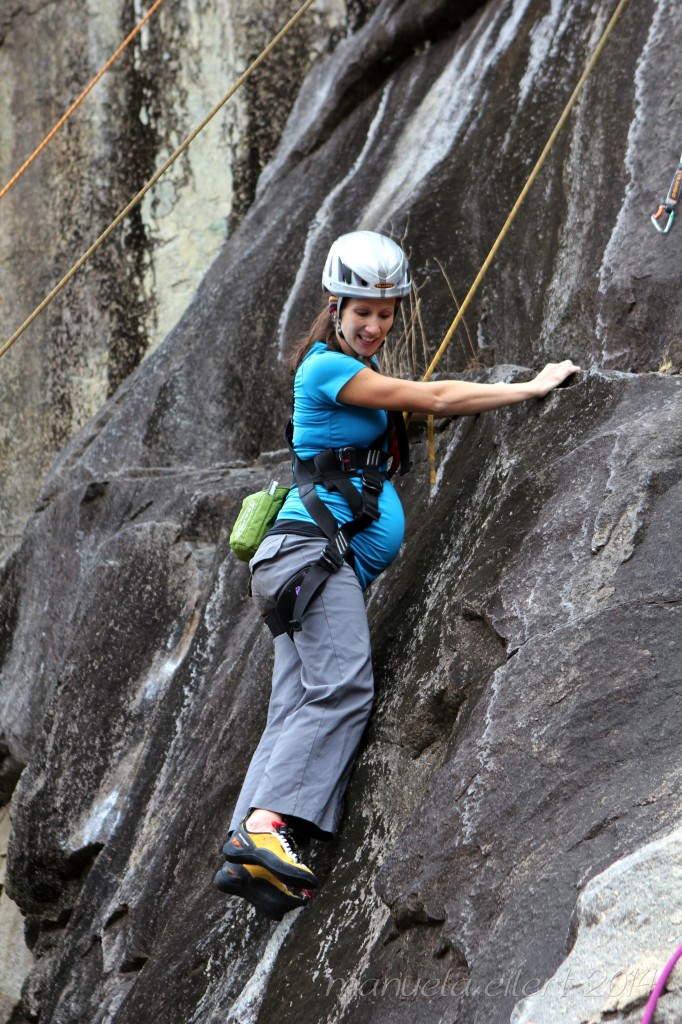 35 weeks, back at Rocky Face

Week 37:  The majority of my cardio this week was spent in 30 minutes sessions on the elliptical, though I did get out for one final pregnancy run on Sunday.  I ran for 3.1 out of 3.5 miles, at a staggeringly slow pace of 12:50.  I felt surprisingly good, and am stoked to be able to make it all the way to a full-term run, but to be honest I just feel like being done with running for right now. I also got in 2 climbing gym sessions, as well as one final trip to our local crag.  The gym went as usual – warmed up, logged my 5.11’s, down-climbing whenever possible, and cooled down.  I was happy to be able to do all the moves on a powerful 5.11+ route that just went up.  Our outdoor day was spent at Hidden Wall, which doesn’t have very many belly-friendly routes, so after successfully completing the warm-up I bailed at the crux on the only other two routes I attempted.  Nevertheless, it was fun to enjoy one last day at the crag together as a family of three, and I was glad to be able to support the hubby as he sent his project!

Week 38:  That’s today!  I plan on celebrating with a nice morning walk and an evening at the climbing gym.  The rest of the week will be played by ear, as my doctor implied that Baby Z would arrive sooner rather than later (which just my luck probably means she’ll be late…) This may be the last pregnancy update until her arrival, but it certainly won’t be the last blog post.  I’ve been furiously working ahead these past few weeks, so I’ve got a ton of posts in the queue that I’ve been chomping at the bit to share, but have saved so that I’d have content other than sleep deprivation for those first few weeks.  And of course, I’ll post updates (and pics) once my sweet little girl arrives!