When it comes to new babies, it seems like the topic du jour always involves developmental milestones.  Is she sleeping through the night yet?  When did he start walking?  And, have you started with solid foods yet?  But I like to think that each family has their own unique milestones to achieve as they grow and develop within a changing family dynamic.  For us, one of those milestones is “first outdoor climbing trip.”  With Big C, that happened at 6 weeks, on a bluebird spring day at Pilot Mountain.  Since Baby Z was born in the same month (this not by accident…), we had a similar time table in mind this time around.  So with a forecast of sunny and 60’s, and three great partners lined up, we decided to go for it just one day shy of the 5 week mark. 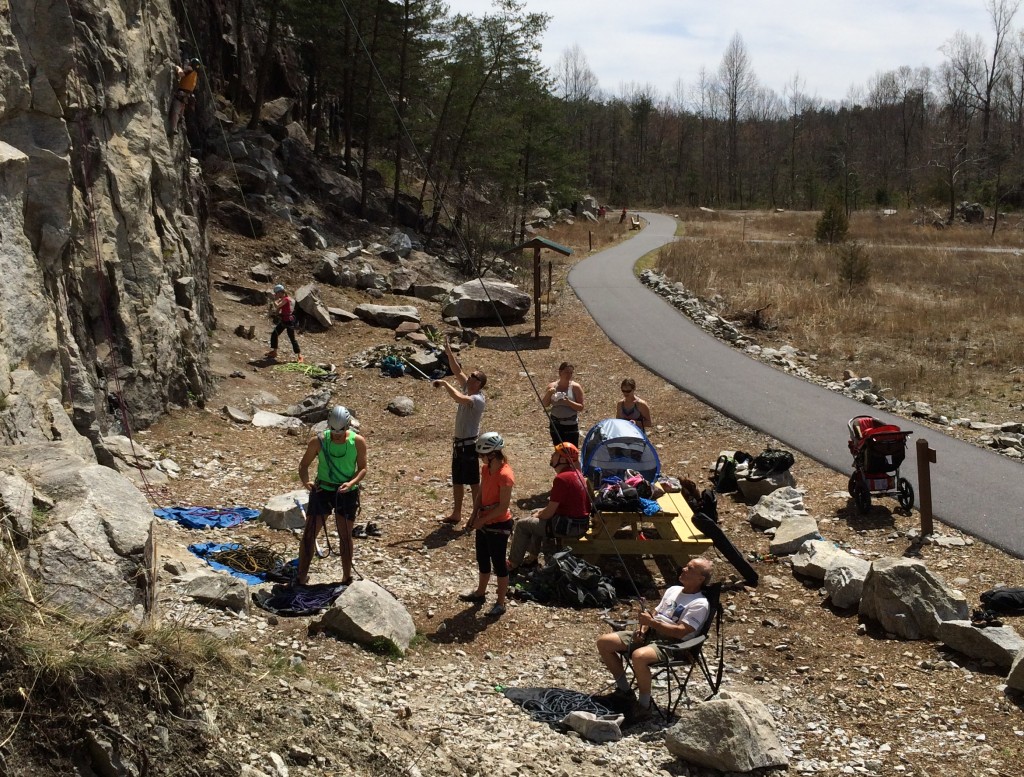 I have to admit that while having been through this “first” before I was confidently optimistic, I was feeling pretty rusty when it came time to pack. It’s amazing how quickly you forget – I actually found myself going back through some of my early days “Creating a Cragbaby” posts.  Lucky for us, we now have an area that is virtually fail-proof as a “first time crag.”  (It was closed to climbing when Big C was a baby.)  Rocky Face is so convenient that in many ways, it almost feels like cheating!  Not sure what to bring?  BRING IT ALL!  The parking lot is only about 50 feet from the base of the climbs.

The only thing Rocky Face is lacking is shade.  It BAKES in the sun…ie, yesterday’s temps were bordering on too hot.  In fact all the grown-ups came away with decent sunburns.  Big C was the only smart one that insisted on wearing his long-sleeve jammies for the majority of the day (pretty sure ninja turtles were on his mind more than sun exposure though), and we were all thankful to have the PeaPod Plus by KidCo for our new little cragbaby (full review coming soon!) 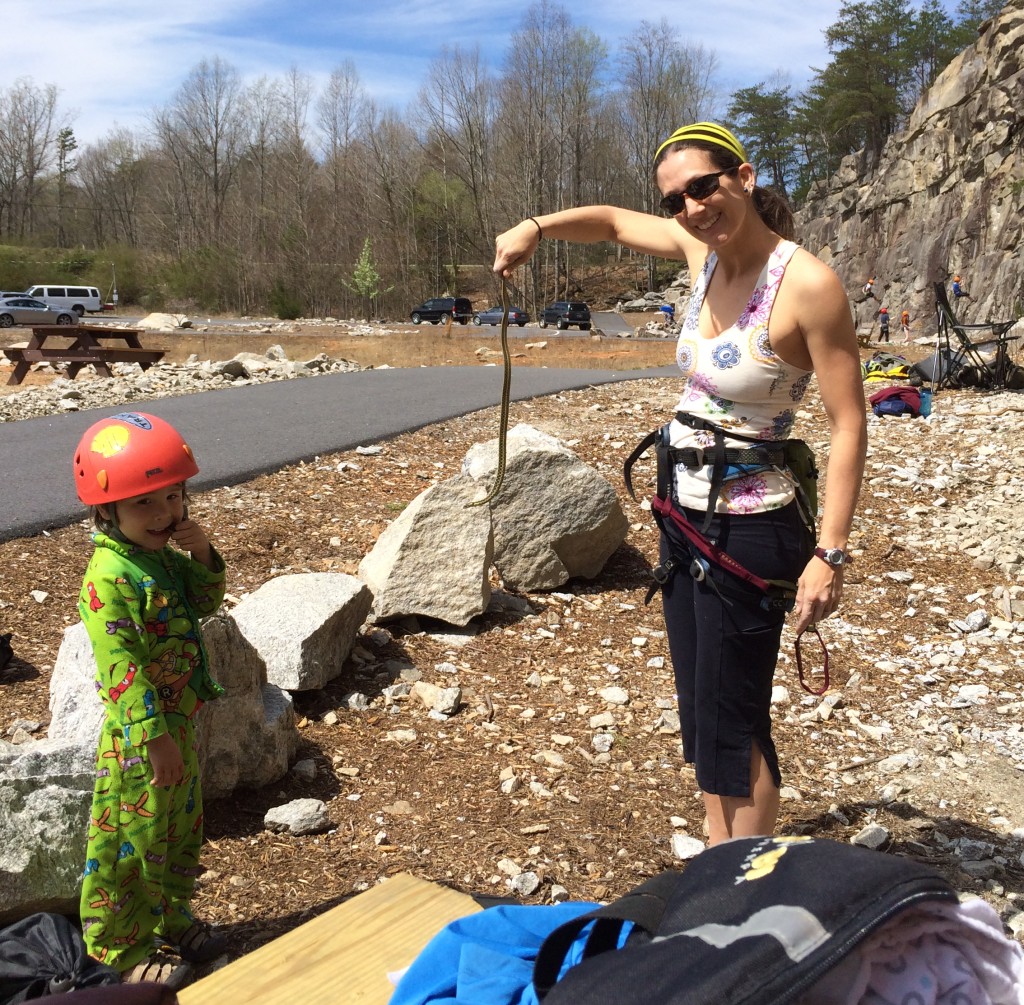 Our day as a whole could not have gone any better!  We were thrilled with how well Baby Z did – she pretty much just alternated between nursing and sleeping all day long.  It was definitely an interesting day, and hubby and I came away with several observations, most of which were actually RE-observations – things that had also happened with Big C back in the day, but had long since forgotten.

MORNING CHAOS – Even though we had packed a lot of our gear the night before, getting out of the house was rather chaotic.  Getting everyone dressed, fed, and in the car is pretty simple on paper, but with a newborn around, it’s a mad dash after that first nursing session to make sure we are in the car before baby gets fussy and needs to sleep again.

CRAG NAPS – Baby Z slept like a champ.  She slept for the car ride there (predictable), and then took two mega-naps in the PeaPod (not predictable.)  I was obviously expecting a newborn to nap at the crag, but had assumed that with all the extra stimulation going on, we’d be in for multiple catnaps rather than a couple of long ones.  But she surprised everyone by spending the whole day konked out on a picnic table in the middle of all the action, only waking up to nurse.  It made me remember how hubby and I used to marvel that Big C (who was generally a horrible sleeper for the first few months) would sleep so much better at the crag (or in a tent) than he ever did at home.  It’s pretty early to tell, of course, but I’m starting to think it’s a genetic trait… 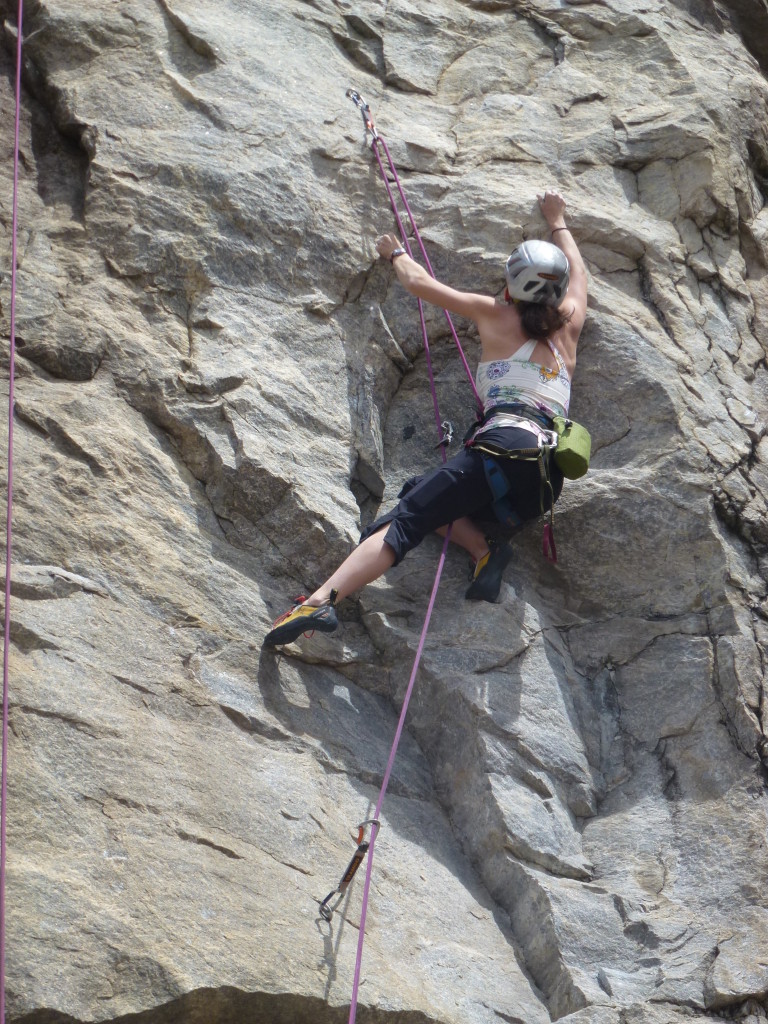 Enjoying being on the sharp end again!

OLDER SIBLING TIME – When there were just three of us, I could pretty much rotate through nursing, climbing, belaying, and watching a baby sleep.  But now there’s another kiddo involved.  He needs time with Mommy and Daddy too…oh yeah, and he also wants to get in a climb or two himself.

END OF DAY MELTDOWNS – I’m not gonna lie, if our day at the crag was heaven sent, the simple hour and a half trip home was the car ride from hell!  Everyone was starving, but we kept driving waiting for a wide awake (and generally unhappy) Baby Z to fall asleep.  Once she finally nodded off, we pulled off the highway, and Big C decides to make a really loud sound that wakes her up…back to the highway we go.  Somehow amidst the wrath of a newborn woken too early, Big C falls asleep, the grown-ups decide (rather grumpily) to push on towards home and then get take-out.  But of course, by then, Baby Z needed to nurse again, Big C was cranky for about 15 minutes, then morphed into that strange, overtired manic state.  Meanwhile the grown-ups just wanted to eat and go to bed.  Moral of the story?  No matter how tired I am after a long day at the crag, my kids are tired-er.  I’ll keep that in mind for next time…

As for me, it felt glorious to be able to get out on the sharp end again.  My head felt sketchier than I’d wanted it to be on our warm-up (Flight Time, 5.7+), so I opted to toprope Mr. Aidman’s Free (5.11a).  Remembering the moves helped get my confidence up, and when it was my turn again, I pulled the rope and led it cleanly for my first real send in about 9 months!  Other routes for the day were Quarryisms, 5.10c/d (easy climbing to a crazy reach move at the anchors), and Snake Charmer, 5.10b/c (NOT recommended on a warm day!)

Despite a few tense moments here and there (mostly happening in either our car or our house at the beginning and ending of our day), I would definitely call our first day out as a family of 4 a hands-down success!  Psych is high at our house for New River Gorge season, and we hope to find ourselves up there sooner rather than later! 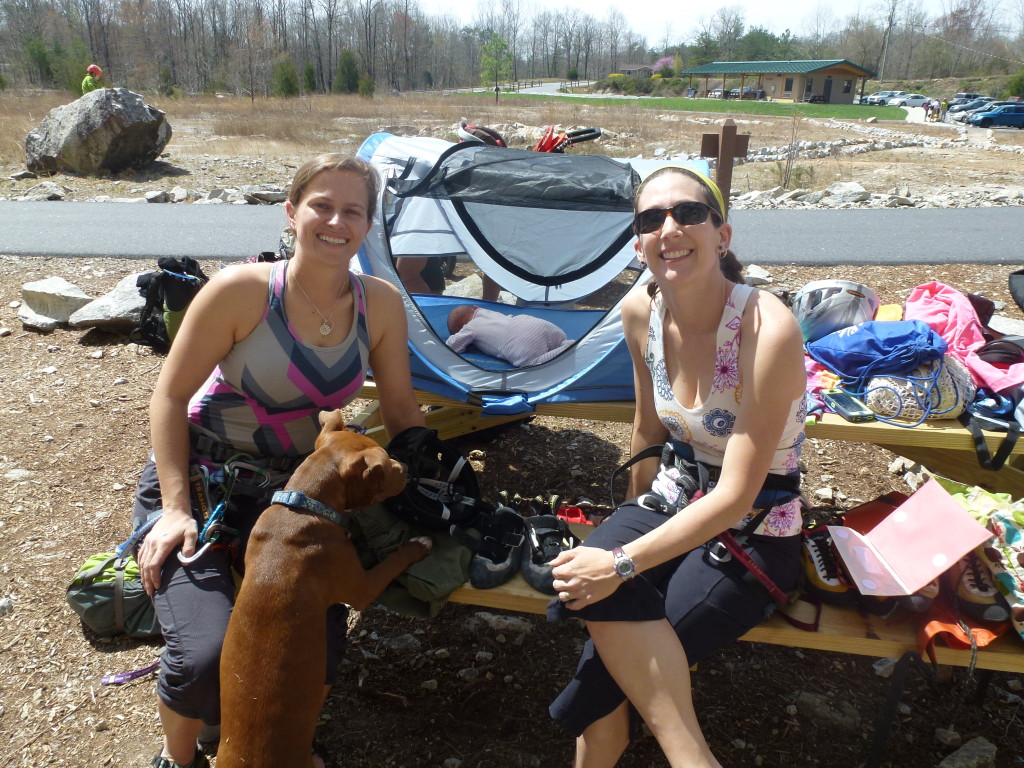 4 Responses to “First Experience Craggin’ as a Family of 4!”