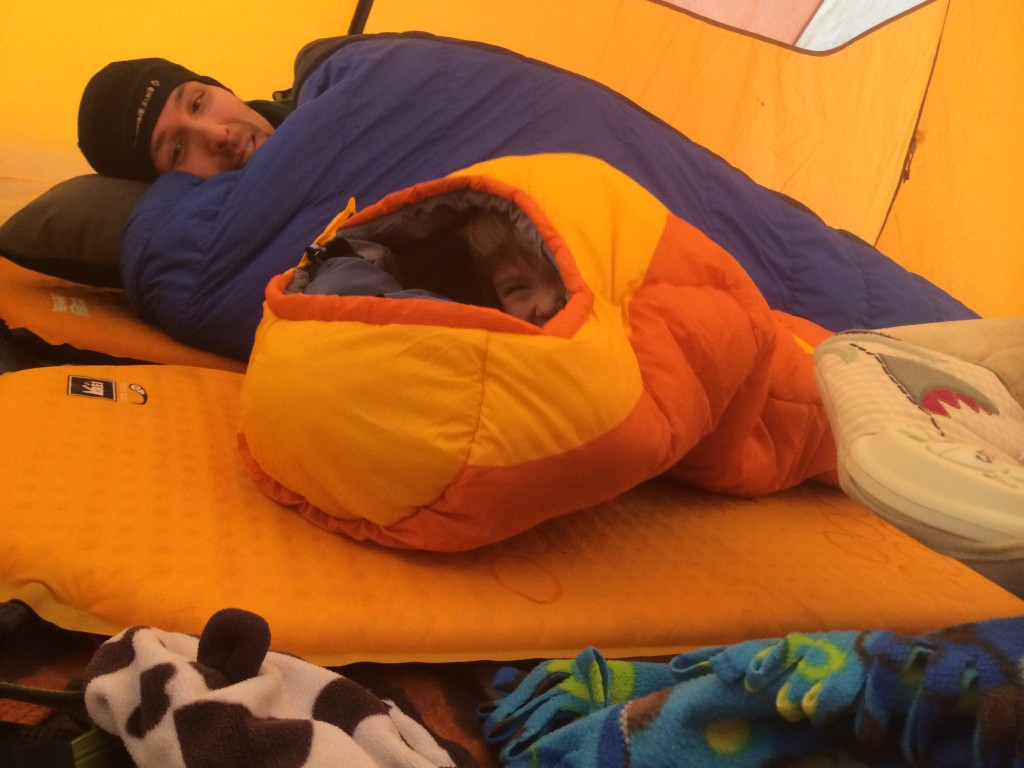 Big C having a blast in his new sleeping bag!

As Baby Z gets bigger by the day, the weather has gotten more and more beautiful and enticing, causing our family to come down with an increasingly worsening case of spring fever!  Hubby and I have been chomping at the bit to hit our favorite spring climbing areas, and Big C has been psyched to try out the new sleeping bag he got for Christmas.  So when a friend of ours suggested we hit up Grayson Highlands State Park for some bouldering (thanks for the nudge, Michael Chickene!), we decided there was no time like the present for 8 week old Baby Z’s first night in a tent.

I’d be lying if I said our first evening under the stars as a family of four went off without a hitch.  In fact, for me personally anyway, it probably ranks pretty high on my “Worst Ever Nights of Camping” list… 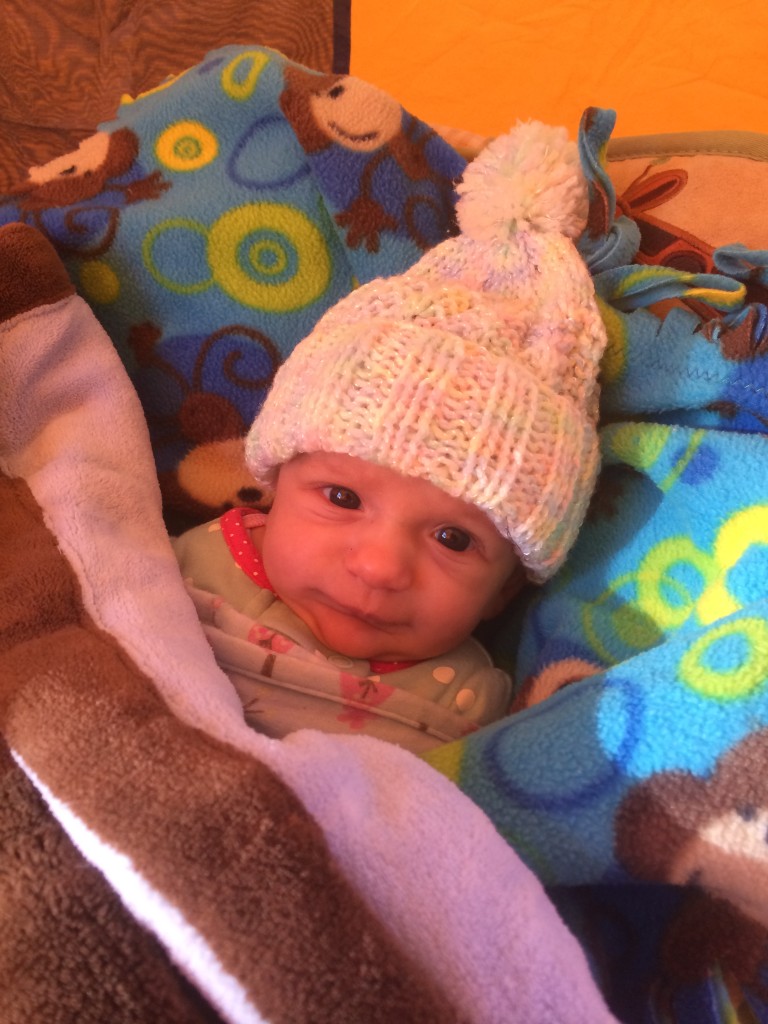 Our trip actually got off on the wrong foot within minutes of leaving the house and forgetting the baby swings, which we use to put Baby Z to sleep. Although we’d left early to hopefully miss the majority of the traffic getting out of Charlotte, we ended up waiting through about an hour of crawling traffic on the highway.  All that stop-and-go made for a cranky, screaming baby that couldn’t stay asleep.  When Big C was that age, one of us could just hop in the back to try and comfort him…usually it would help a lot, and we could generally make it to our next planned pit stop.  In the event that it didn’t work, I at least felt better that he knew he wasn’t alone back there.  But now there’s a 4 year old back there too, and our Honda Element doesn’t have a 5th seat (and we were packed to the gills anyway), so I couldn’t get back there to her.

So after only an hour into what was shaping up to be much longer than the intended 2.5 hour drive, our entire car was falling apart.  Baby Z was shrieking incosolably.  I was desperately contorting myself across the back seat every 30 seconds (no exaggeration) to retrieve a fallen paci, which inflicted mommy guilt on so many levels (I’m not a fan of the paci, nor am I a fan of not being with my baby when she’s screaming.)  Big C was absorbed in the portable DVD player, except for the occasions that Captain Obvious would announce that Baby Z’s paci had fallen out (and usually at 90 decibels, since he hasn’t figured out the concept of speaking voices and headphones yet.)  And Steve…well Steve was actually doing a good job anchoring everyone together. 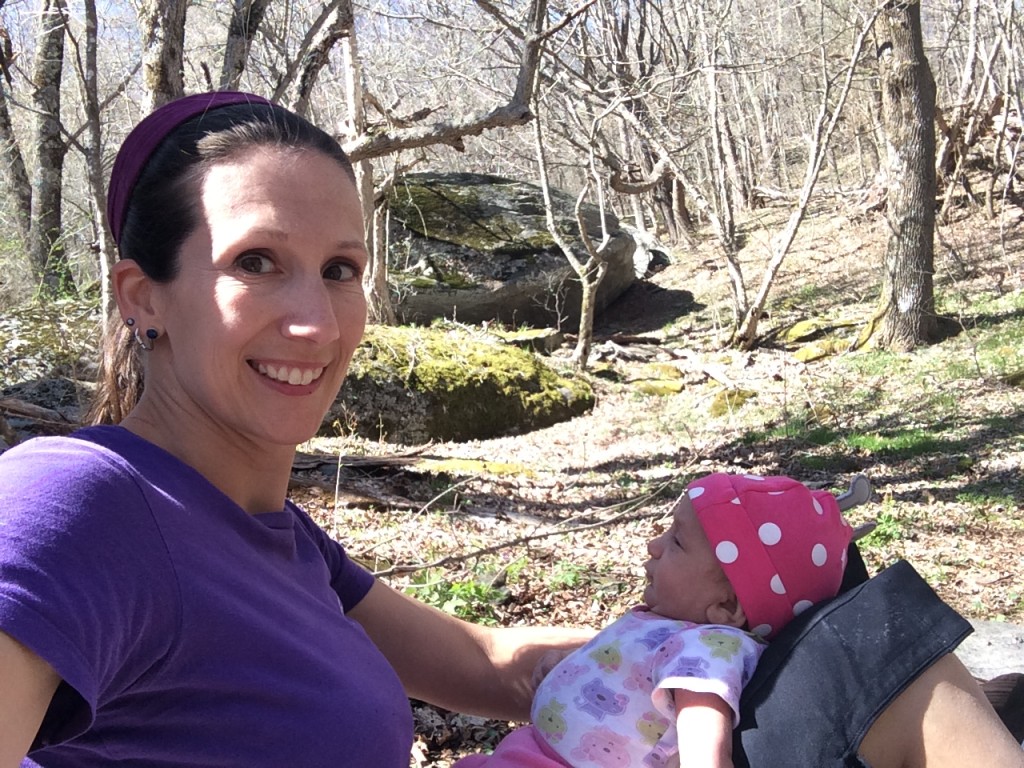 Just enjoying the day with my little girl!

“Let’s stop for dinner!” hubby suggested around 5, hoping that the traffic would clear and we could all reset.  We gassed up, Baby Z tanked up on some Mommy milk, and Steve and Big C walked next door to the Arby’s…only to discover that due to a freak power outage they were closed.  Back in the car we go.  Things were somewhat better after dinner…but emphasis on the “somewhat.”  The pacifier acrobatics continued, this time through twisting and turning mountain roads rather than rush hour traffic, and Steve opted for a “short cut” that extended our hellacious drive for an extra half an hour.

We rolled into the park just after sunset, and were shocked to discover that the winds along the ridge were gusting at upwards of 60 mph!  It was at this point that it dawned on me that my wardrobe choice for the evening may not have been the best.  Big C, however, was in heaven.  He squealed and cackled with glee as he helped Steve set up the tent, while I nursed Baby Z in the car.  Once everyone got settled into our tent, it was clear that I was in for a long night.  I’d forgotten how much harder middle of the night nursings are in a dark tent than in the comfort of my own bed…especially when it’s cold.  But, as I said, we got through it.  And by morning, the winds had died down, the sun was blazing, and after a hearty oatmeal breakfast, we were ready to crush some pebbles! 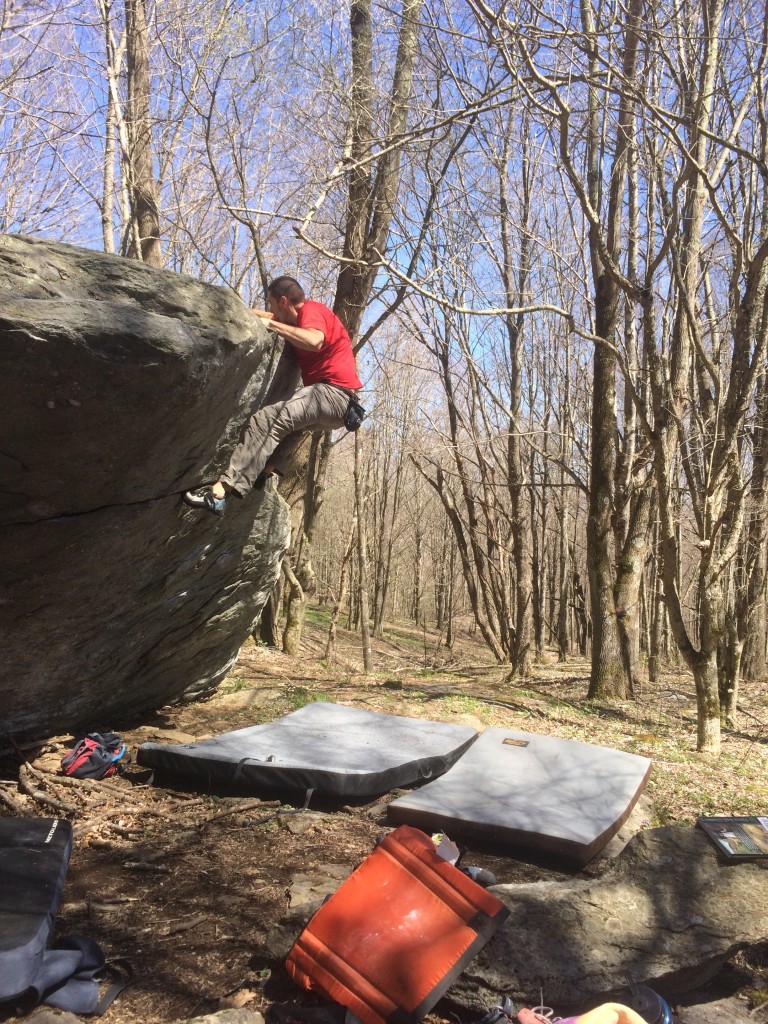 Steve rollin’ over the top of Capgun (V2)

Grayson Highlands State Park has gotten a lot of buzz in the Southeast bouldering scene in the past few years, and it’s pretty obvious why.  The climbing is sharp but fun, the scenery is spectacular, and the access is a dream.  Though we spent a fair amount of time there during Big C’s first year, we hadn’t been back since the fall of 2011.  So much has changed since then (for both the park as well as us!), so we were excited to get back there.

Honestly I didn’t have very high hopes with regards to sending hard.  Bouldering is not one of my strengths, and with a newborn around, I fully expected to spend more time nursing than climbing.  And while that was mostly true, I was pleased to be able to get a few sends sprinkled throughout my day.  We started out on the Listening Rock Trail, warming up on The Hive Boulder before moving  back around to the Trail’s End boulder, where I was unsuccessful on Hullabaloo (V4), but did manage to claw my way up Matador (V4).  Then we hopped on over to the AVP/Boneyard area.  After nearly shredding my fingertips off flailing around on Frontman (V5), I gave up and moved up the hill to the Sidekick Boulder, where I ticked off two fun lines that were more my style – The Railway (V4+) and Pancho (V3).  We ended our day on the Capgun Boulder with Capgun (V2) and Presidential Problem (V3).  Add to that great weather and even better company, and our day was definitely worth the trip! 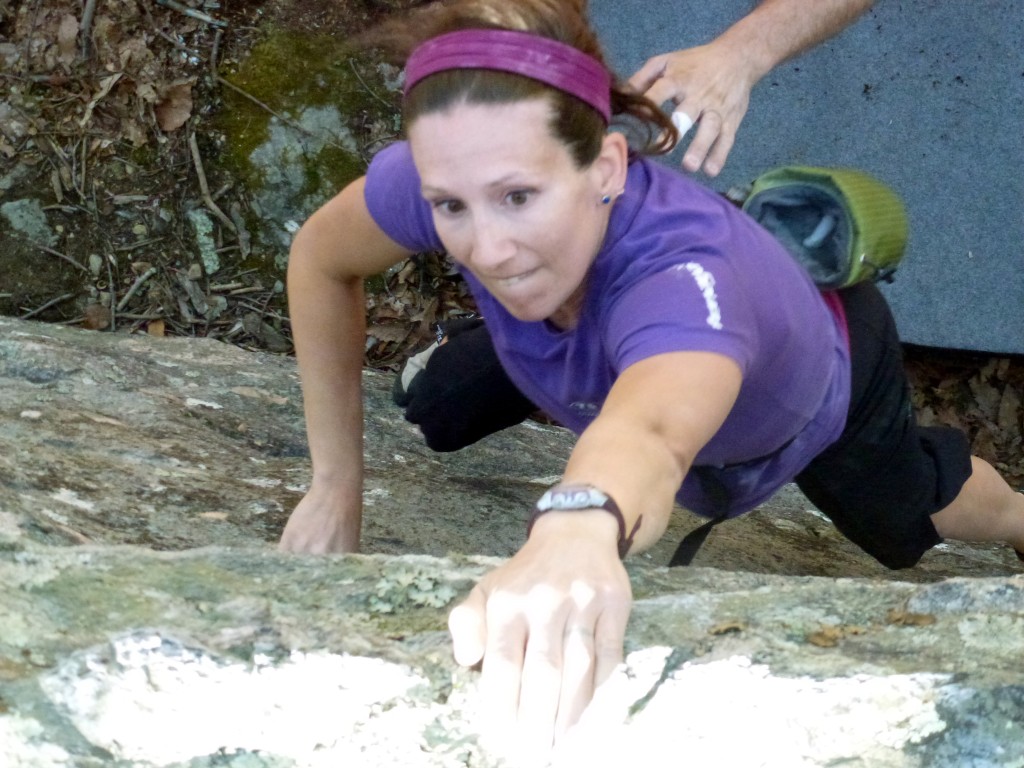 Trying hard on The Railway (V4+)

The drive home was refreshingly better than it was the day before – in fact, I would daresay it was pleasant!  On the way home we came up with several arrangements that would have made the drive up significantly better for everyone (all of which included upgrading to a mini-van, which we had already been planning on doing just as soon as we scrape up the cash!).  Despite the horrendous start, I’m so glad our trip ended on a good note.  It was definitely far from perfect, and parts of it downright sucked, but we got through it, learned from it, and are psyched to do it again soon!  (And we have a great first camping story to tell Baby Z when she’s older!) 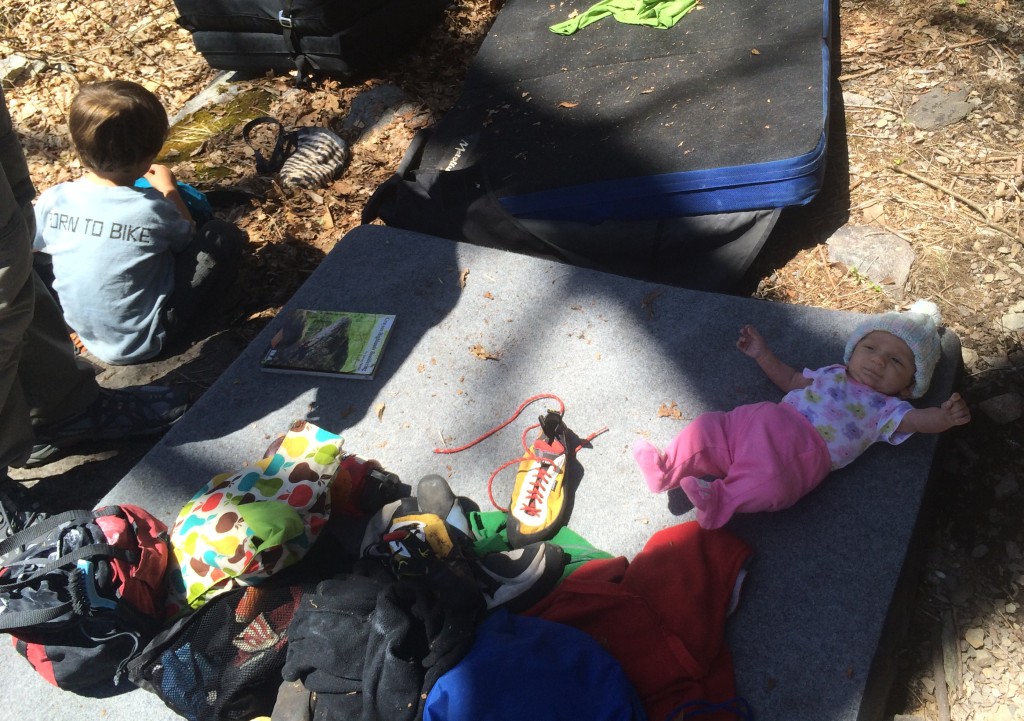 Theres a baby in the gear explosion!