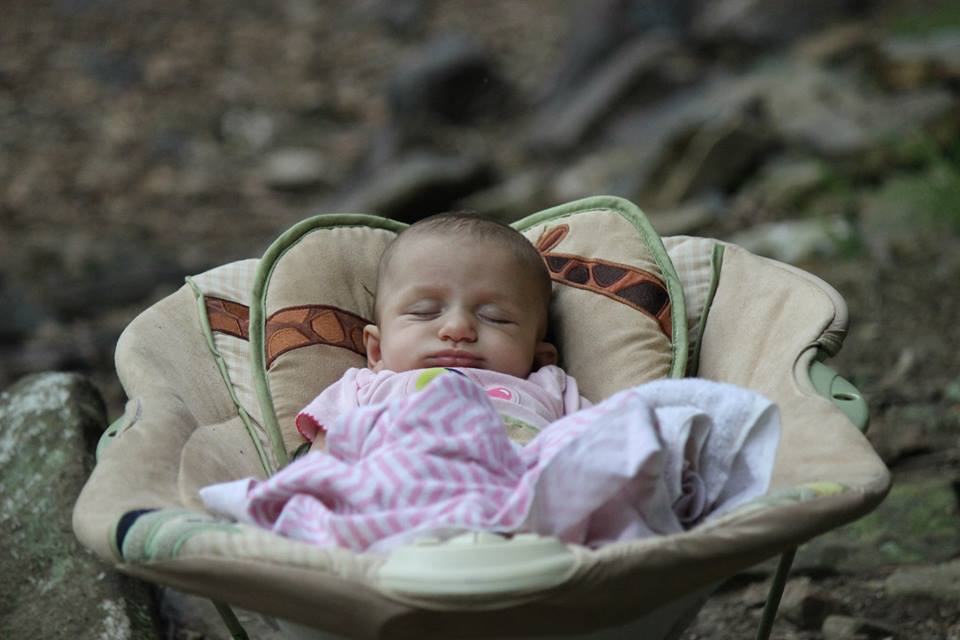 Family tradition mandates that we spend Memorial Day weekend climbing and camping at the Obed Wild and Scenic River, an area just outside of Knoxville, Tennessee, and this year was no exception.  Despite my excitement to get on a rope again, I was a bit apprehensive about the logistics.  It was only our 2nd time roping up with Baby Z, and roped climbing can be a lot harder to manage than bouldering at this age since I can’t always just hop right down to get to her (although if I’m not there someone else always is.)  Additionally it would be Baby Z’s longest camping trip yet, and our first time going completely “off the grid” with her in a primitive campsite.  But she slept right through us getting lost on our walk back to the tent EVERY NIGHT, and even established a new sleeping record!

Needless to say I went into the weekend with very little expectations.  Thanks to the interval training I’ve been doing I felt pretty strong, but I knew my endurance was lacking, and wasn’t sure how my lead head would feel. 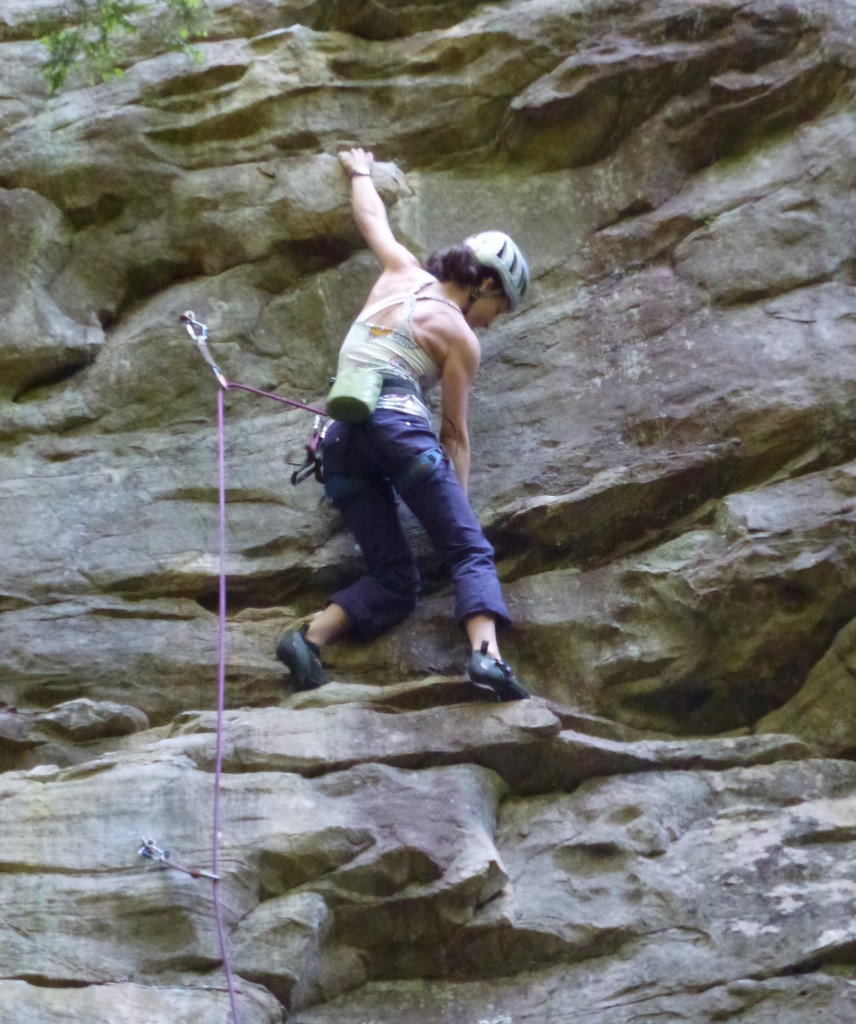 Day 1:
Our first day was spent at Lilly Bluff, where after a quick warm-up (Ticks are for Kids 5.10a), I had my sights set on Osiris (5.11c).  It was one of the few 11’s left on the wall that I had yet to get on.  It took me longer than I’d wanted, but I finally sent it on my 4th go.  My onsight attempt started off well, and after a giant stand-up move off an undercling I actually thought I might be through the business…until I got spanked repeatedly on the very next sequence.  After taking several whippers that kept slamming me into the wall (bolt below a bulge + sideways lunging = awkward catch no matter who’s belaying.)  I decided to stick clip my way through the move, which of course takes a lot of shenanigans when you’re 50 feet in the air, which of course is when Baby Z starts screaming…and screaming…and SCREAMING!  Once I got it clipped I just pulled through the move, and ran to the top.  The whole debacle only lasted about 15 minutes but the mommy-guilt lasted for hours…

A while later after everything had settled down I took a toprope lap, intending to just clean it (I’d just lowered off earlier so that I could get to Baby Z faster.)  But I of course tried to work out the crux move…and realized if I extended the draw, I could clip before making the move and therefore avoid the awkward fall again, so I decided to pull the rope and try again.  My third go I had a hard time getting my foot where I wanted it, and my core couldn’t hold out long enough to keep me tight enough to the wall to make the long reach over the bulge and I popped off.  Fourth time was a charm.  Again, longer than I’d wanted, but I’ll take it, considering.  Plus all those falls were great for the head! 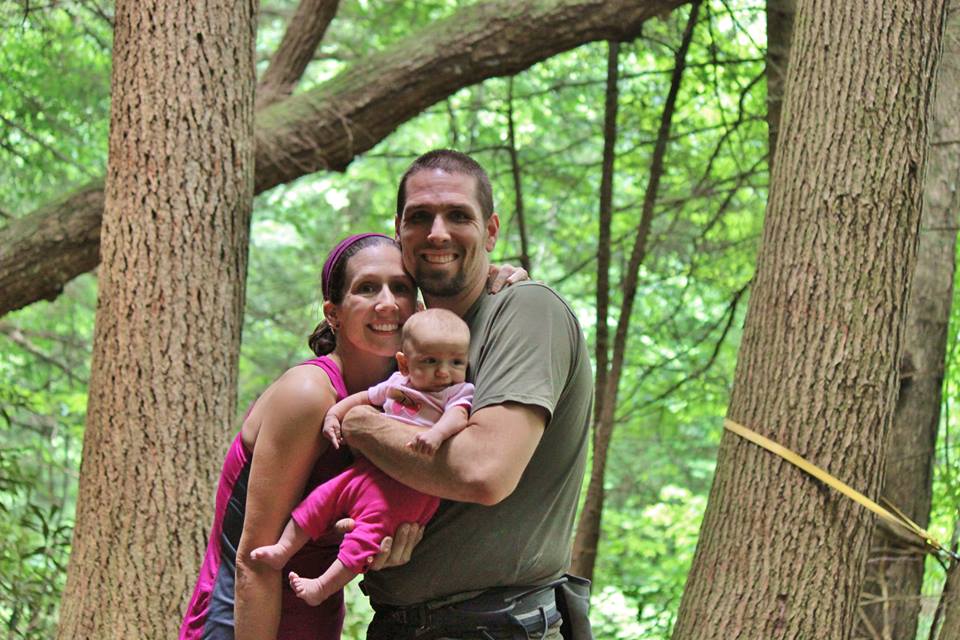 Day 2:
Little Clear Creek was our objective for the day, and I really didn’t have a tick list.  I’d already done most of the moderates, which was good because the crag was a mob scene.  We noticed several new lines left of the Short Wall that had gone up since we’d last been there, and since they were just about the only thing without a line we decided to check them out.  The first one had some pretty big lockoffs and ended up not being the best of warm-ups.  The next one was a fun and casual romp up blocky features that felt about 5.9. 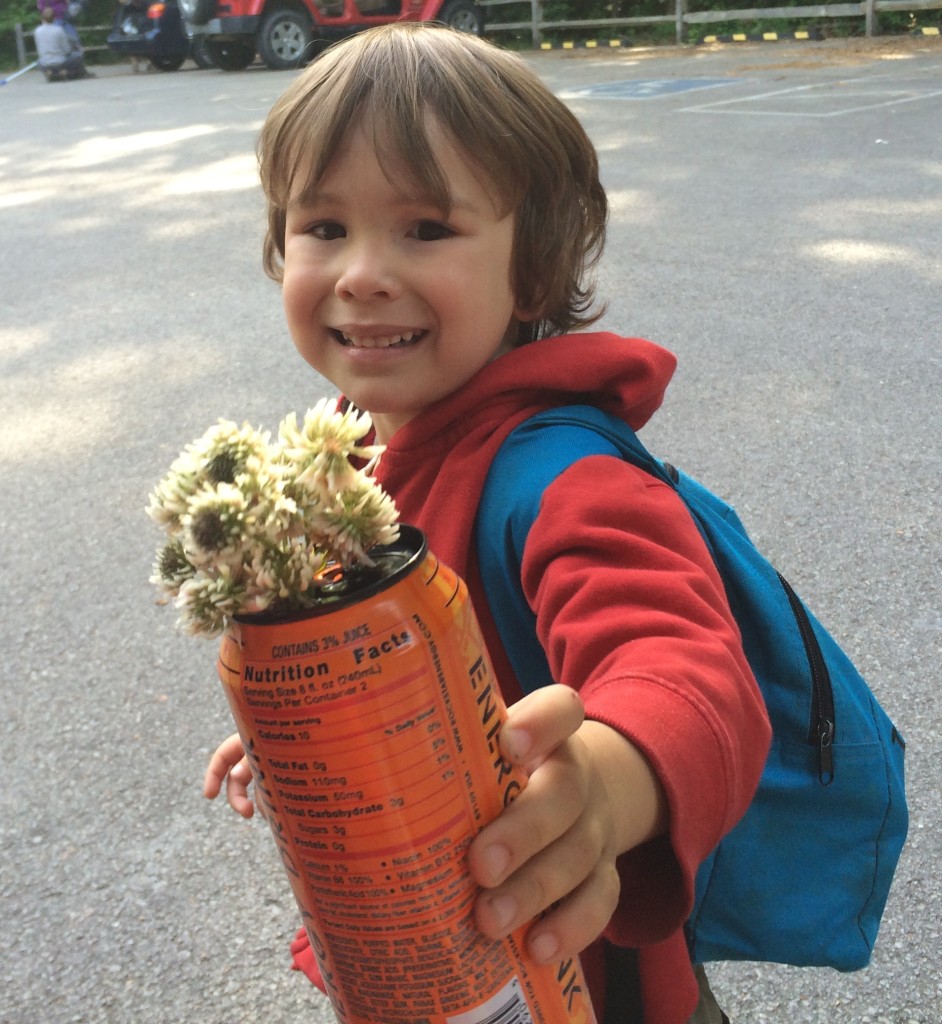 Impromptu vase after some breakfast clover-picking

From there we moved to The Hanger, an area with very steep bolted routes (most with perma-draws) that all start from a long shelf-like ledge about 30 feet off the ground.  I was pretty skeptical at how my not quite 3 months postpartum core muscles would hold up on such overhanging terrain, but at this point it had started to rain, so I didn’t really have any other option.  I decided to try my hand on The Saint of Auschwitz (5.11c, A0).  (The A0 part skips the V8 boulder problem at the start…basically you just batman up he rope to the first bolt and climb free from there.)  Despite the funkiness of getting started, this route was my favorite of the entire weekend.  A tricky sequence through the opening dihedral led to 60 feet of jug-hauling bliss!  My first go I hung at several of the bolts but got through all the moves first try.  I was reminded of the “power of the second go” when I tied in again later and sent it without any trouble. 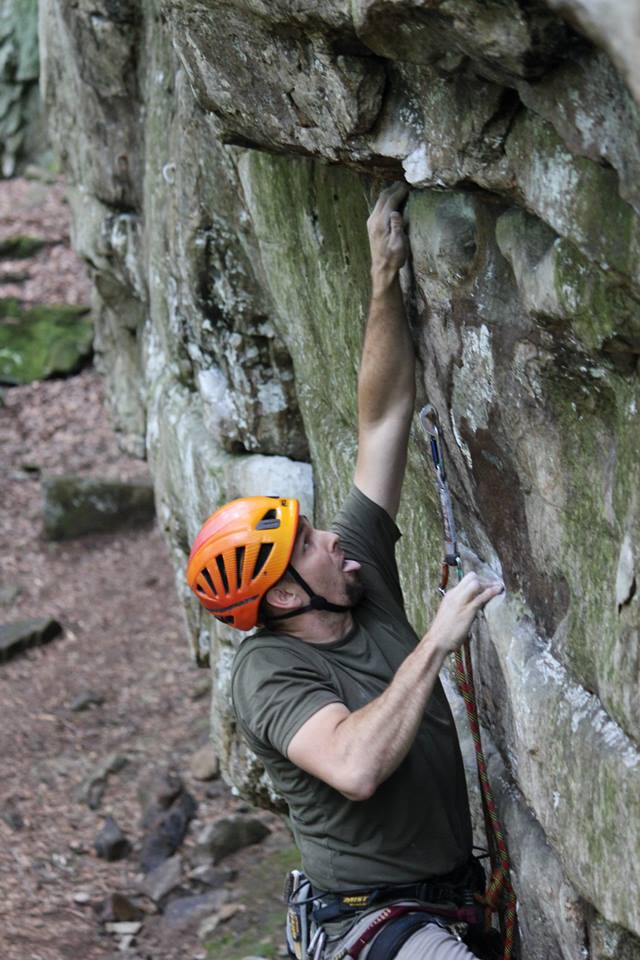 Steve crankin’ the mank on a last day attempt on Gangsta 5.12a 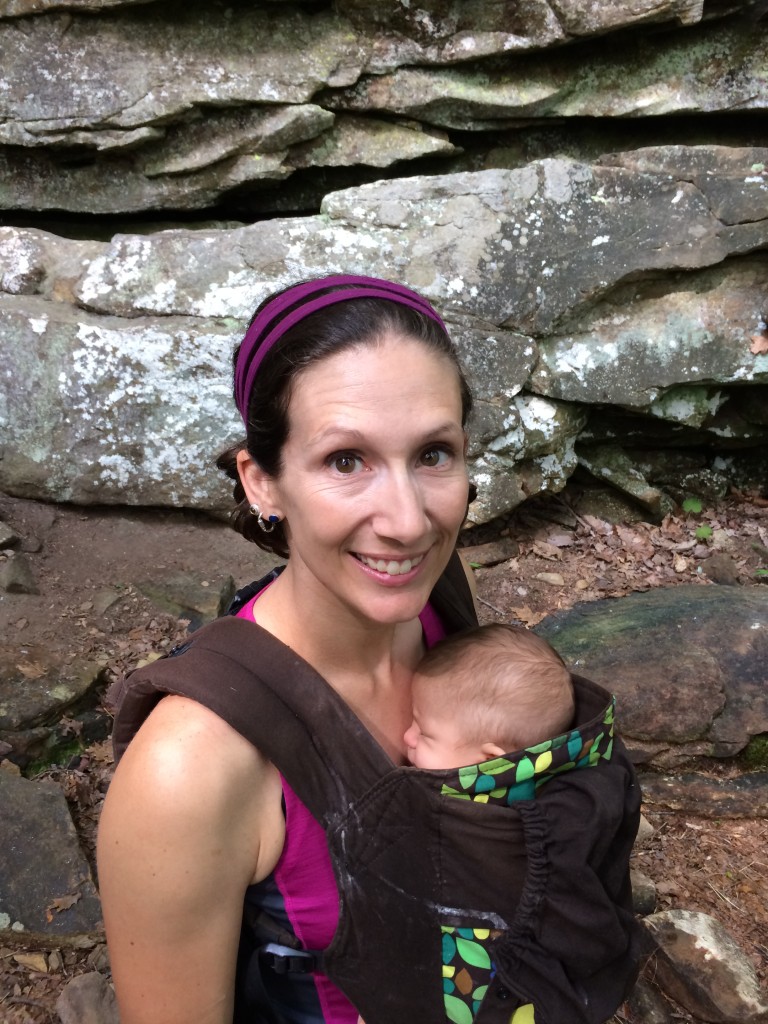 Day 3:
Our last day found us back at Lilly – the short approach always works out well with the 5 hour drive, plus Steve had started a saga with Gangsta (5.12a) on Day 1, and wanted a crack at it again (unfortunately, just like my saga with the route, he’ll have to be patient and wait for another trip.)  We  obviously weren’t the only folks with the same idea however, because once again, there were crowds galore.  Additionally, the increased humidity from the rain the day before had left a layer of condensation on the rock which made for pretty manky conditions.  I started out on Beach Ball (5.11a), which is one of my favorites, and took a crack at Krieg Crack (5.11d.)  The business was all in the first 20 feet, then the rest was rather lackluster.  No send, but it would be worth doing again on another trip, especially when the friction was better.

All in all though, we had a great trip.  Baby Z was awesome, and Big C was thrilled to have friends to play with each day.  I’d forgotten how mentally taxing having an infant at the crag can be, so I was delighted to tick a few sends in between the constant nursing and diapering!  It felt great to get back on a rope again, and we all left happy and stoked to plan our next adventure!