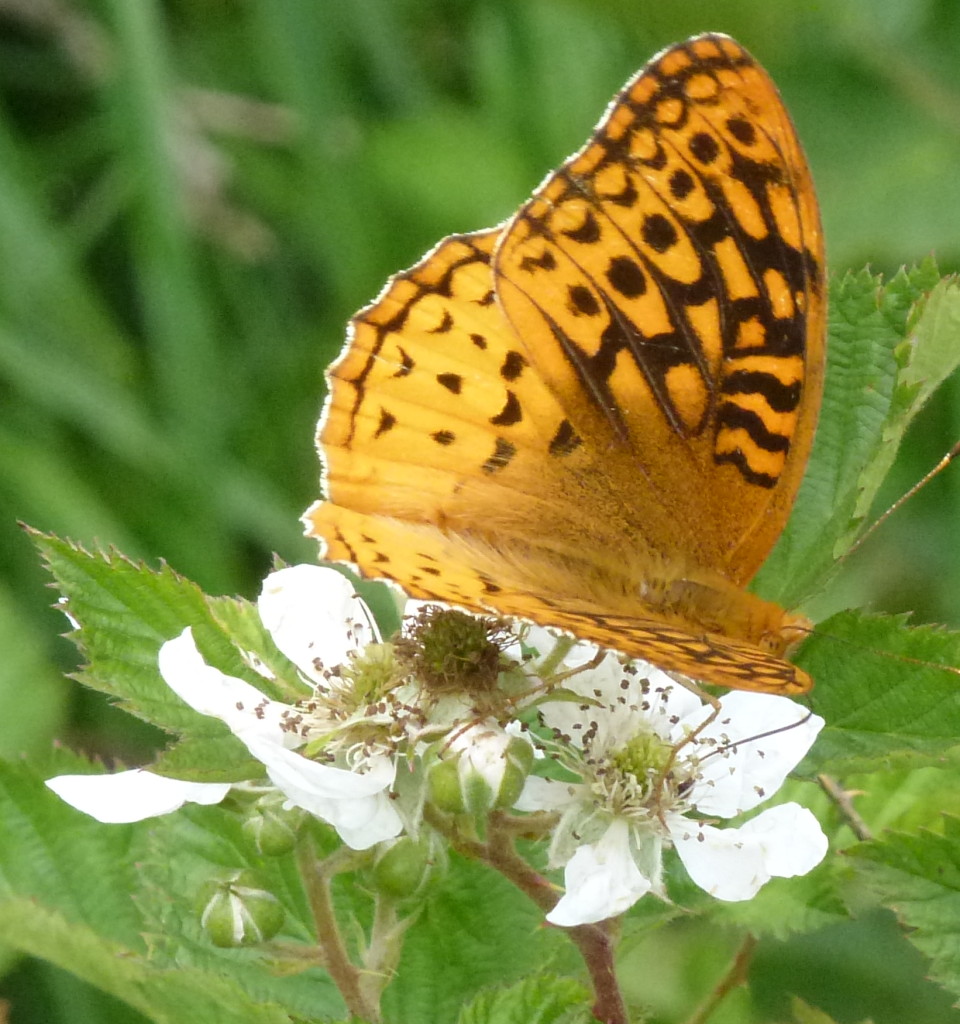 Great Spangled Fritillary – I bet we saw 100 of these!

After enduring a week of daily 90+ temps at home, our family was more than ready to head to the mountains for the weekend!  An indecisive weather pattern kept our plans in limbo until the very last minute, but Mother Nature was on our side, providing us with a delightfully refreshing escape from the heat!

HIKE:   Our objective was the Boone Fork Trail, a 5 mile loop through surprisingly diverse terrain.  We made our way through rolling meadows teeming with beautiful fritillary butterflies, then dropped down into the “dark forest” (Big C’s words.)  There were more than a dozen very shallow stream crossings, with plenty of rocks to hop across if you prefer to keep your feet dry (although C’s favorite part was tromping straight through.)  There were a handful of steep uphill/downhill sections, but they were always short, with plenty of level terrain in between to rest little (and big) hiker legs.  About halfway through we hit a section of low angle “ladders.”  All but one were more like open-rung staircases, and the one true ladder was only about 10 feet tall.  In other words, not necessarily “kid-friendly,” but if you’ve got adventurous kiddos that are in good shape they shouldn’t have any problems.

The highlight of the day was stopping to relax and play at a riverside beach.  We stayed there for over an hour, skipping stones, wading in the shallows, and rock hopping our way over to a small waterfall on the other side.  Honestly, Big C probably would have preferred the hike to end there…but there was still a little over a mile and a half left to go to get back to camp.  It took quite a few hiking bears towards the end, but the whole loop (including our pit stop) took around 5 hours, and I was very proud of Big C for finishing with a smile on his face!  Oh yeah…and despite the forecast of scattered thunderstorms throughout the day,  it only showered on us for about 10 minutes!

CAMP: We spent the night at Julian Price Memorial Park, which is right off the Blue Ridge Parkway.  We snagged one of the first-come, first-serve sites right by the lake, and I was impressed with how much room and privacy we had.  We made friends with our neighbors (which meant we got to partake in their yummy cherry cobbler ritual!)

CLIMB:  Big C was psyched to have not one, but TWO friends to play with at the crag today (a small, bolted area right off Hwy 221 called the Dump.)  In fact, we had to all but drag him away at the end of the day (and we didn’t leave til almost 7:00!)  As for the grown-ups, the Crag-Daddy and I both had our sights set on the same project – Fry Cleaned (5.11d.)  The climbing is pretty moderate until the last 15 feet…and then it commences into one of the longest, most intricate crux sequences I’ve ever had the pleasure of figuring out.  Like most of the routes at the Dump, the crux boils down to working your feet up off an undercling and bad feet.  There’s also a mid-crux clip that is scary in a “the-bolt-is-at-my-face-and-I-can’t-take-a-hand-off” kind of way.  Though falling with rope out is a very poor idea due to a small ledge a couple of bolts down, it’s also a very real possibility, as the clipping stance is terrible.  I took the fall last time (and stayed off the ledge thanks to a heads-up belayer), and wasn’t interested in taking it again.  After a lot of debate, I opted to toprope it first to dial in my beta. 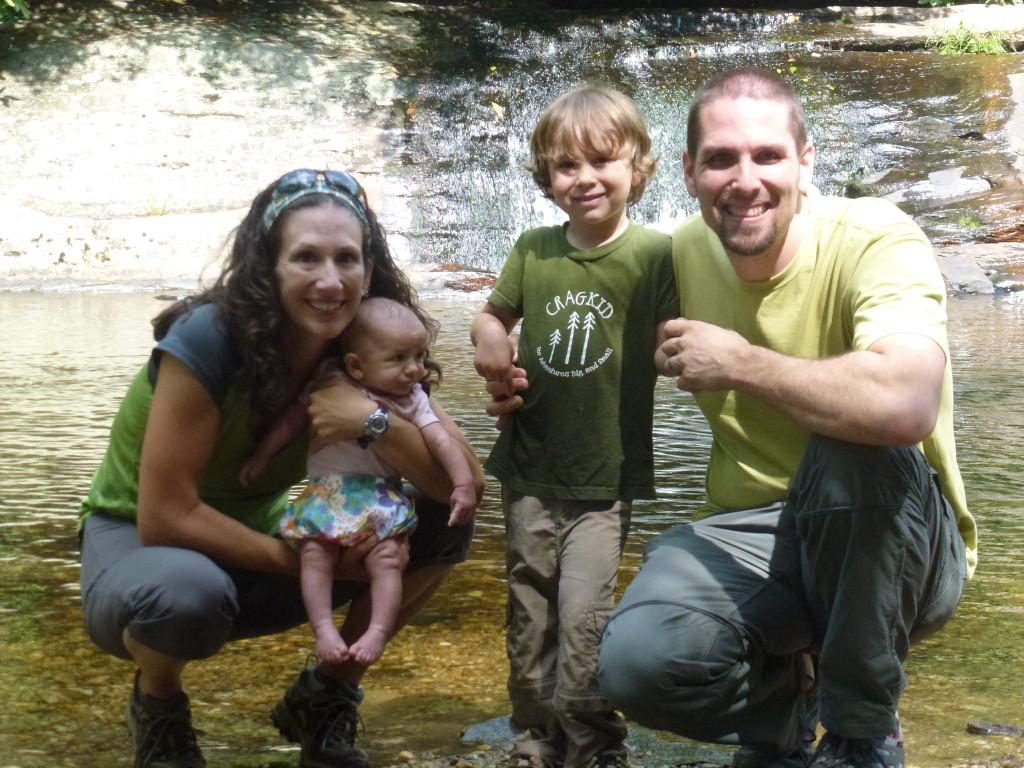 I then proceed to climb the route clean on toprope, and kept inside the tree stand safety equipment we’d brought for climbing trees. I absolutely HATE IT WHEN THAT HAPPENS, as in most cases it shows that one is physically capable, but mentally unable to fully commit to the route.  But I guess it’s understandable that at 3 months postpartum my lead head isn’t 100% yet.  Regardless, the toprope lap was a good confidence boost anyway, and when I pulled the rope to tackle it on lead I felt pretty good.  I must confess that mid-way through the crux I thought long and hard about grabbing the draw instead of trying to clip (as in, my hand was literally reaching out to grab it), but I took a breath and told myself that if I can take a hand off to grab a draw, I can just as easily reach down and pull up rope.  I could feel the clock ticking a bit on the last stand-up move to the anchors…and I rushed it and looked up to my next hand hold before my right foot got all the way up to the next foothold.  I came up short and punted off with the anchors in my face…(cue sad trombone.)

Dangit.  Not seeing your foot all the way to the hold is the climbing equivalent to a baseball player not keeping his eyes on the ball all the way to the bat.  A beginner mistake, and strike #2 for me.  My next attempt I was determined…but distracted.  Baby Z was screaming hysterically, and even though I knew she was safe in her Daddy’s arms, I couldn’t stay focused while still wearing my mommy hat, and I fell again, this time one move earlier.  I was ready to call myself out after three strikes, but thankfully Steve played the role of supportive husband and insisted that I give it one more chance.  The 4th time was the charm, and I was so happy that I stuck with it. 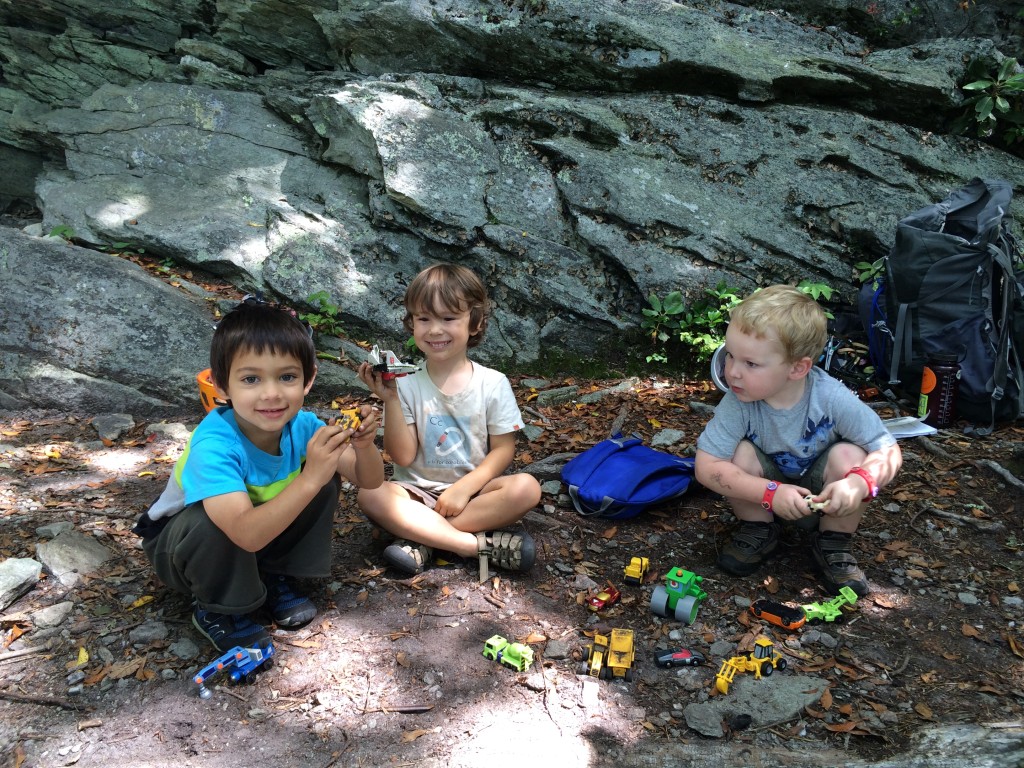 3 little crag-buddies having fun in the dirt!

Lessons learned this weekend?  There were two…One – don’t let a sketchy weather forecast keep you inside.  And two – mental focus is a major player when it comes to sending a route.  What did you learn from your adventures this weekend?