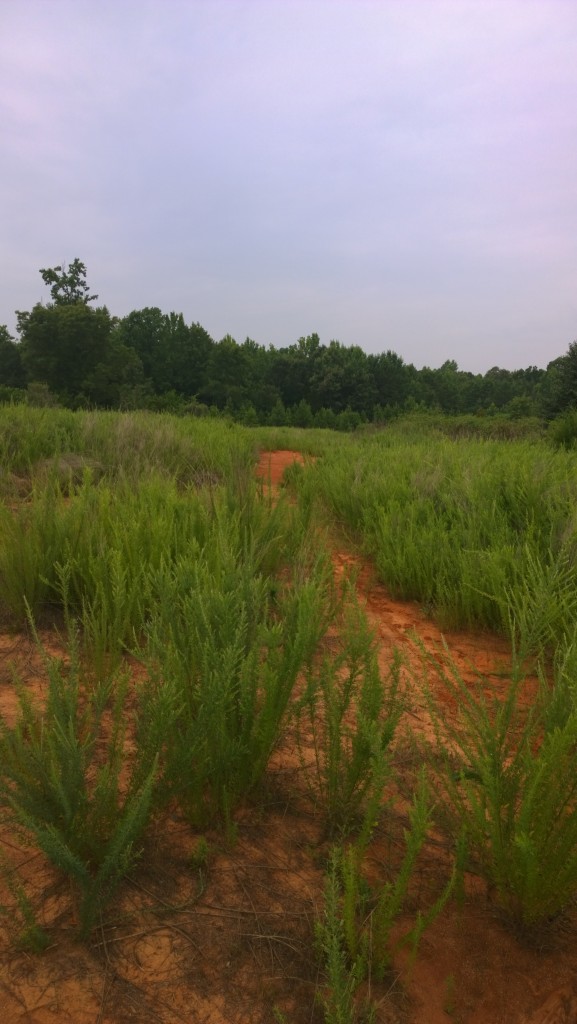 It started out innocent enough…

“Is this the same way you went with Daddy?” I asked with raised eyebrows as the undergrowth got thicker and taller, leaving nothing but a narrow sliver of trail beneath it.  Big C nodded uncertainly, and we pressed on, pushing our mountain bikes further and further into the thicket, along what must have been a (seasonal) game trail. Then we hit the blackberry patch, or rather it hit us, in all of its thorny glory.  (Why had I decided to wear Chacos for this “cas

ual” afternoon bike ride?!?)  Big C got snagged a few times, but I took the brunt of it for him.  After battling through briars for several more minutes, we eventually found ourselves at a dead end in a small clearing, at which point I realized that my phone was no longer mounted to my handlebars.  I retraced my steps through the thorny mess and found it..but the mountain bike trail we were searching for was nowhere in sight.

Big C was putting on a brave face, but I could tell he was starting to get worried.
“Are we lost, Mommy?” he asked quietly.
“No sweetie,” I replied, “Mommy knows where we are, I’m just trying to figure out how to cut over to the real trail.”
“This is not the real trail Mommy.”
“I know, honey.”

For those of you not familiar with the “Fun Scale” used by many outdoor enthusiasts (climbers, paddlers, skiers, backpackers, etc…), let me give a quick synopsis…

TYPE 1:  What most people think of as just plain fun, enjoyable both during the event and as a memory.  Obvious examples could be clipping bolts at the local crag’, making first tracks in fresh powder, hiking along a ridge with beautiful views.
TYPE 2:  This type of fun is NOT enjoyable while it’s happening.  It’s only fun in retrospect, and always makes for a GREAT story later.  It often involves feelings of fear, pain, or danger, caused by getting lost, stuck, or forgetting something important.  A sudden turn of events like inclement weather, a wrong turn, or a wildlife encounter can instantly morph a scenario from Type 1 to Type 2 fun.
TYPE 3:  This situation is actually not fun at all, even in retrospect, and usually occurs when something has gone terribly wrong.  It’s the stuff PTSD is made of. 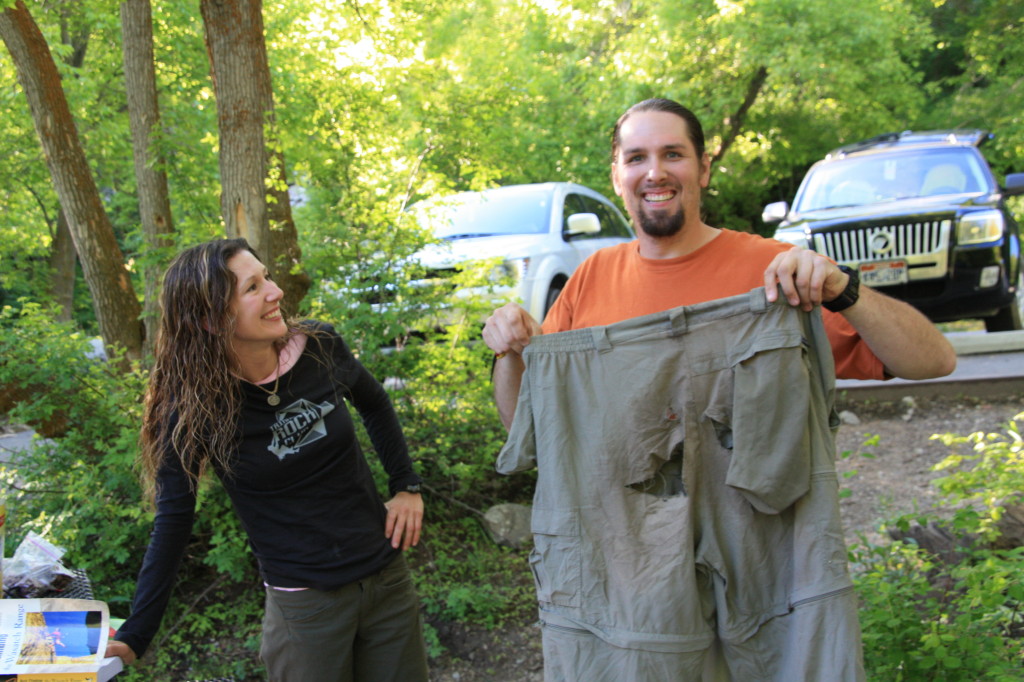 Type 2 fun is often memorialized in pictures, this one from Big Cottonwood Canyon…

Spend any amount of time in the Great Outdoors, and you’ll soon realize that Type 2 Fun is just a fact of life (although you’ll hopefully be able to avoid Type 3, unless of course you’re one of those masochistic alpine/offwidth/ice climber types…).  In fact, almost all of our pre-kiddo vacations contained elements of Type 2 interspersed with a lot of Type 1.  There was that time in the Everglades that our backcountry canoe trip went awry with heavy winds, mangroves, and manatees.  Or the time that we finally made it to the top of the JHCB Wall in Big Cottonwood Canyon in the broiling sun, only to botch the walk-off and find ourselves navigating thousands of feet of rattlesnake-infested death scree.  I’m sure most of you have your own tales or harrowing adventure that you love to recount around a campfire. 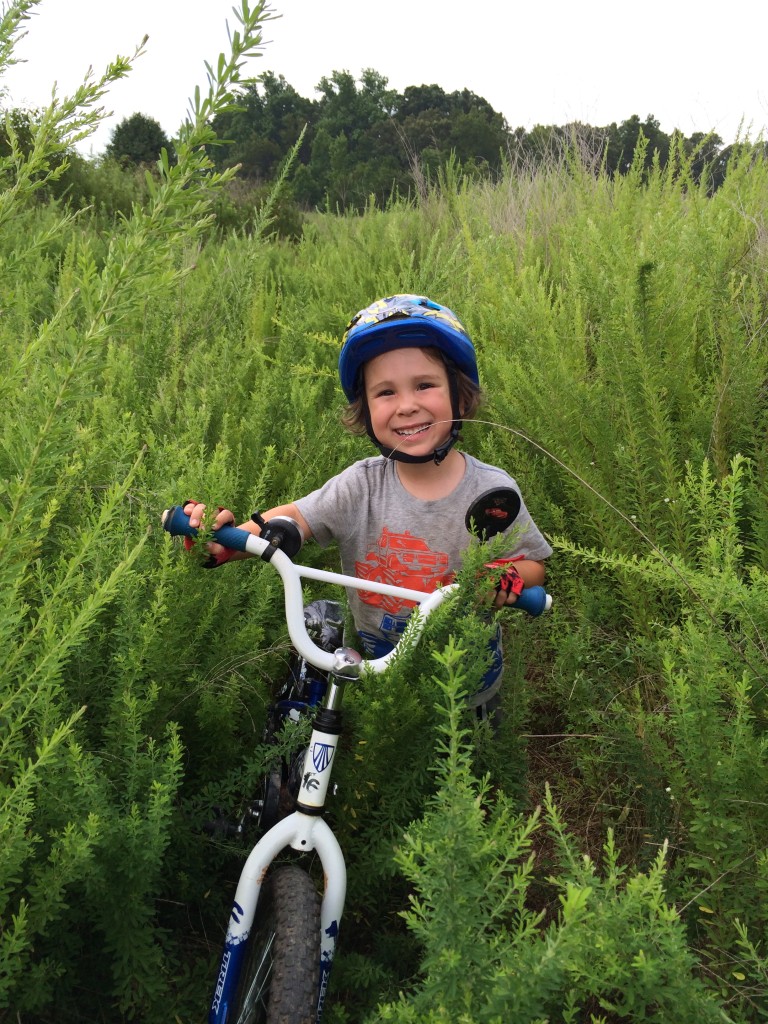 The whole reason we were there in the first place was because we were trying a “short-cut.”  (Isn’t that always how it starts?!?)  You see, the whole family was at the park that day.  While me and Big C were biking, hubby was relaxing at the playground with Baby Z, waiting for us to finish so we could trade out and he could take a lap around by himself.  (Each time we go, we alternate who bikes with Big C and who gets to fly a solo run.)  Anyway, we’d gotten a late start to begin with, which meant Baby Z would be running on fumes by the time everyone was finished (not to mention we’d probably be losing light.)  In the interest of time, I’d decided to take a short cut that would shave off a more difficult section of trail that can sometimes cause Big C some trouble and slow him down.  Hubby had done the short cut once before, and had described it to me as best he could, although neither of us had taken into account how much more overgrown everything would be at this point.

Clearly I had taken a wrong turn, and led myself and my son astray.  Though it was beyond frustrating, we certainly weren’t in any sort of real danger, but I’m sure it didn’t feel that way to Big C.  Just when I thought he might lose it, we heard some whoops and shouts on our right from about 20 yards away.

One last bushwhack (no thorns this time, but apparently a few chiggers) led us to the main trail, even further up than where I was expecting to come out.  Big C and I high-fived and caught our breath.  I was proud of him for not panicking.

“Mommy I love you,” he said as he downed half of my water bottle.
“I love you too,” I said, and we hopped on our bikes.

Though he was a little timid at first, the rest of our ride went great.  We pretended we were on motorcycles trying to escape from bad guys just like we always do.  We made it back to the playground with nothing more than a few extra scrapes and bug bites as souvenirs of our epic adventure.

As I recounted what had happened to my husband on the way home, I couldn’t help but feel guilty about my mistake, and wondered if I had ruined mountain biking for my son.  But when I snuggled with Big C that night before bedtime, he looked up at me and said, “Mommy next time we bike let’s not go the Lost Way.”  I breathed a sigh of relief!

And I also smiled, as I secretly realized that this was the first of probably many Type 2 experiences we’d have with each other over the course of his life.  After all, in the words of the great alpinist Mark Twight, “It doesn’t have to be fun, to be fun.”