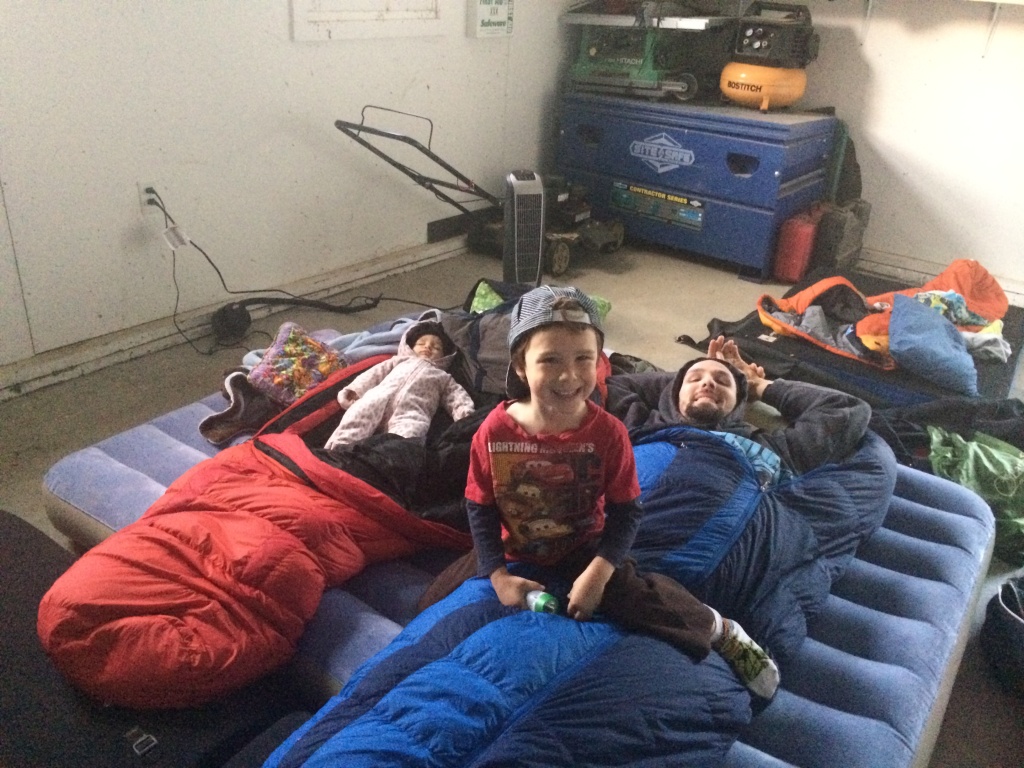 Dirtbaggin’ it family style in a friend’s garage. Much more comfortable than 30 degrees in a tent!

After about a dozen failed attempts to return to our favorite climbing area on the planet, we FINALLY managed to get ourselves up to the New River Gorge for the first time as a family of four!  Climbing conditions were near perfect, and we had a great crew of folks to hang with.  Our first day was spent at a family favorite, Endless Wall.  The Crag-Daddy and I love the style of climbing there, and Big C loves going up and down the approach ladders.

After warming up on Stim-o-Stam (5.11c), we got down to business.  The Crag-Daddy had his sights set on Freaky Stylee (5.12a), which he had been extremely close to sending on our last trip (which was almost a year ago!)  I decided to work on Techman (5.12c).  Though certainly not  classic, it’s a good route.  It’s also right beside Freaky Stylee (actually shares the last bolt and anchors), and my friend Caleb was working it as well, so it seemed like a convenient project du jour. 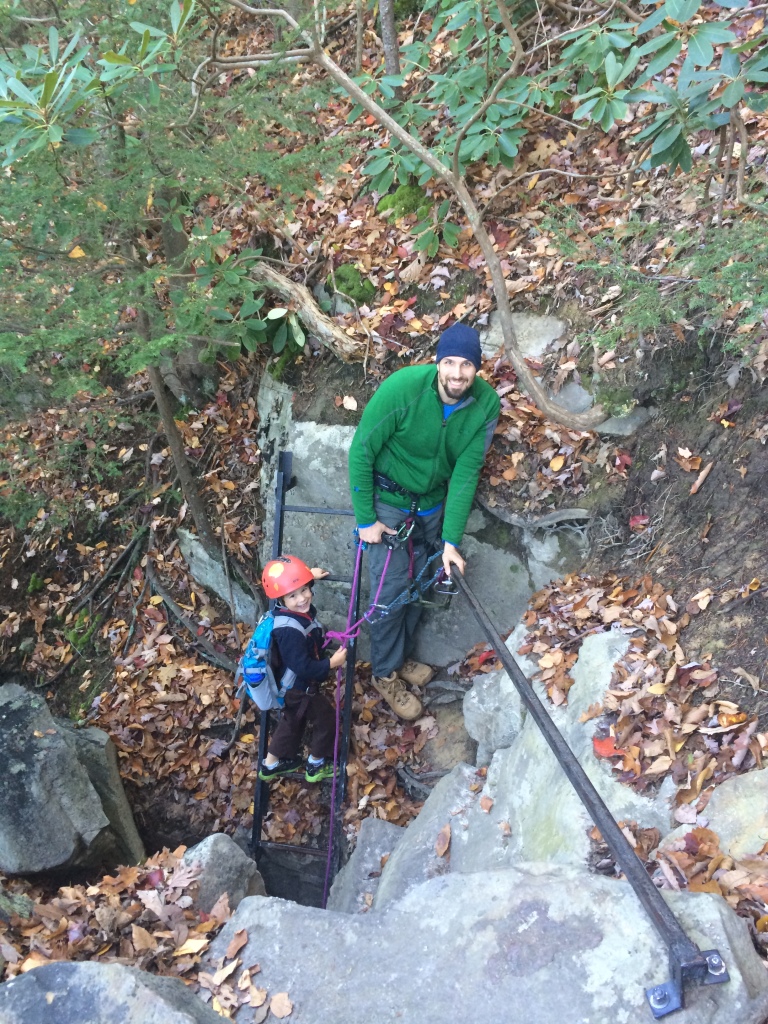 I’d done the crux moves once before, right before I got pregnant with Baby Z (a very stretched out, insecure traverse on several razor blade crimps to a horizontal slot.)  However last time I’d gotten shut down at the next sequence – a powerful deadpoint to a half pad crimp.  This time around it took me a few tries, but once I figured out the beta, I felt pretty solid on it.  The move after that is really cool – a big almost-dyno off of a diagonal rail to a good horizontal.  Not something I would think I’d be good at, but I hit it every time.  The next couple of bolts are pretty chill until the redpoint crux at the last bolt, which also happens to be the crux on Freaky Stylee.  Even though I’ve got that beta dialed, it’s gonna be hard to execute coming in hot!

Unfortunately because of crowds I only got in 2 and a half burns on it (half burn was to work out the lower moves while another climber was on the Freaky Stylee anchor)…but my last go was a two-hang!  I actually made it clean through the crux, but then caught my hand on the rock coming out of a hooded crimp for the deadpoint move…then I also hung right before the Freaky upper crux.  It’s gonna take some beta refinement to figure out some rests towards the top, but I think it will hopefully go next time I’m on it!  (And since Steve didn’t send Freaky Stylee either, I’m optimistic we’ll get back sooner rather than later!)

After a wonderful meal of venison burgers courtesy of our friends (I don’t hunt, but I’m glad we know people that do!), we headed up to Cotton Top the next morning.  It was mobbed with people (but I was psyched to see not one, but TWO other families with babies!)  After a sketchy, chossy, spider-filled debacle with Love Sock (5.12a), we opted to warm-up on Fireman’s Belay (5.11a), a nice route with a well-defined crux that was also pretty heady. 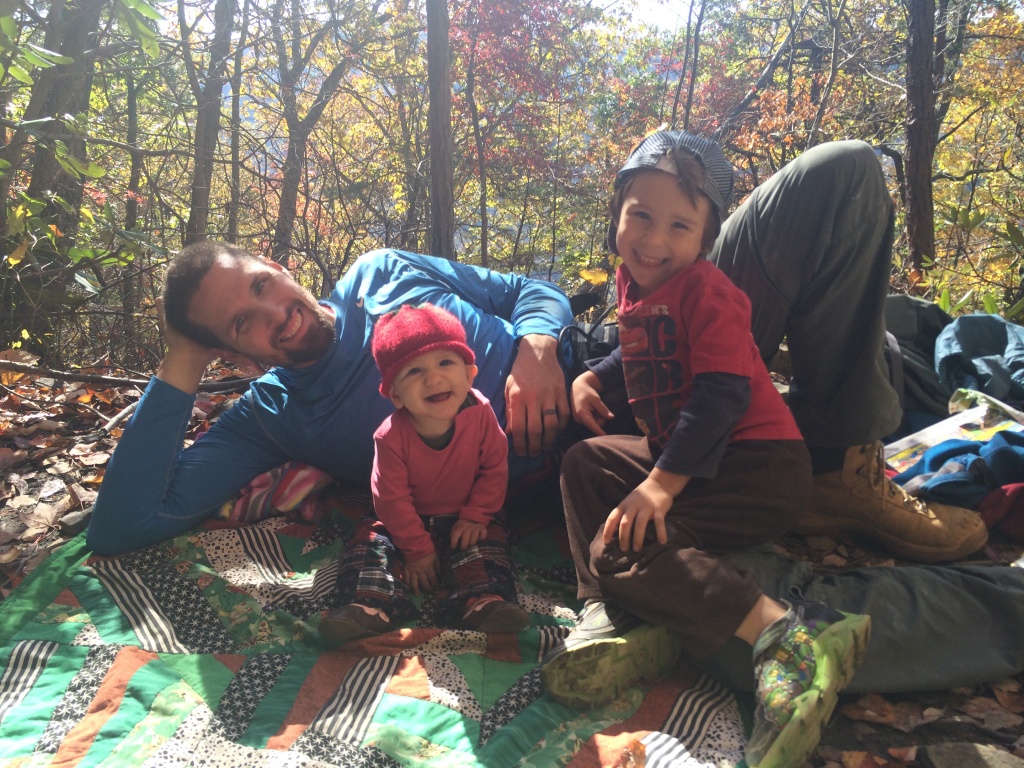 Since it was open, I decided to have a go at Psychowrangler (5.12a), the stand-out classic in the area.  A very “un-Cragmama-like” route, it’s pumpy, powerful, and has exciting (but safe) whipper potential in the upper dihedral!  I’d technically tied in to it a long time ago, but I couldn’t even make it past the 2nd bolt, so it was basically a new route to me.  I got the beta spray down from a friend and took off.  I found great beta for the move that had given me fits before, and this time made it first try!  The crux for me was pulling over the roof and getting established in the leaning dihedra/ramp.  I fell all over it, until finally figuring out some foot beta that would work.  The moves up the dihedral itself are probably no harder than V2, but it is steep, ridiculously pumpy, and the bolts are generously spaced…hence the exciting whipper potential.  It’s been a long time since I’ve come close to falling with rope in my hand trying to make a clip, but this route had me about a half-second away from a (nothing but air) 30-footer!  But I made it through and managed to clip the chains – this route will take a LOT more endurance work before it goes down clean for me, but just getting to the top is progress for me! 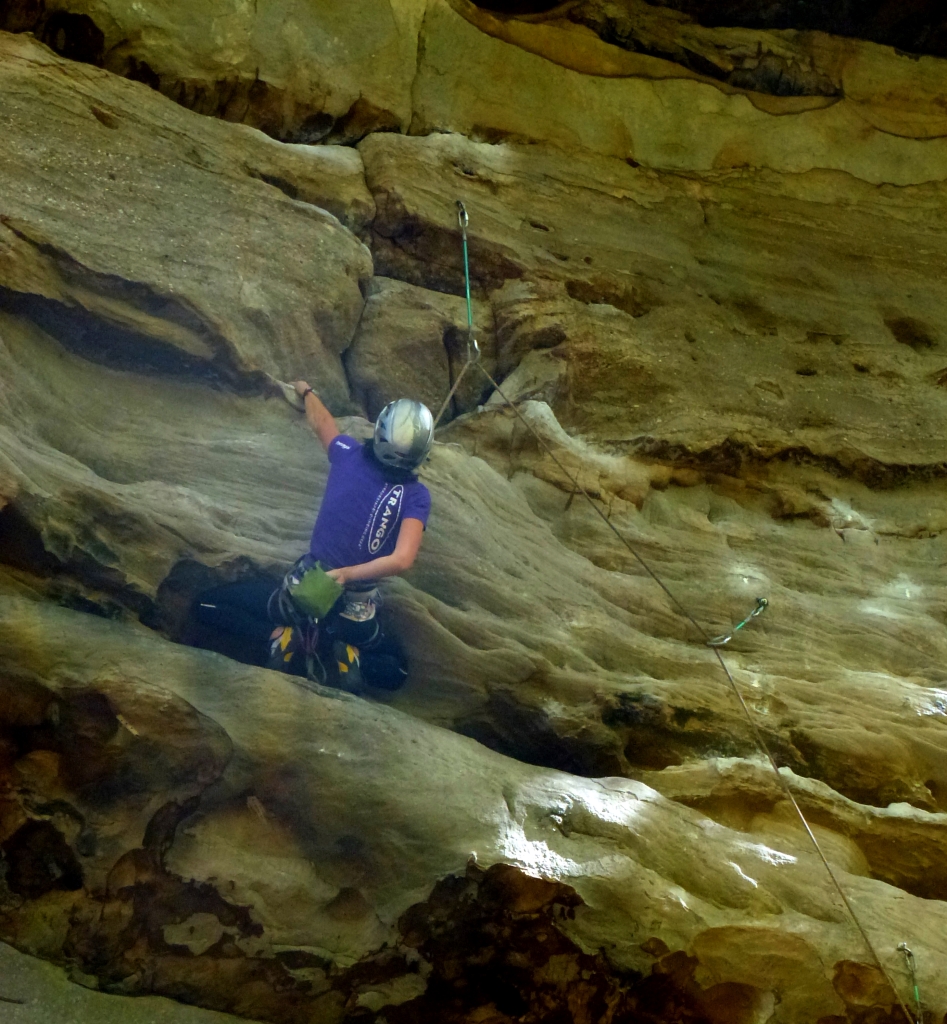 Chalking up on the Psychowrangler double knee bar

The last climb of the weekend worth mentioning is End of Innocence (5.11c), which ended up being really fun – a very technical face that went back and forth across the bolt line, with a surprise lock-off crux towards the top.  It took me a while to figure out the sequences, but I hung on for my first hard onsight since having Baby Z.

We couldn’t have asked for better weather, better climbing conditions, or better climbing partners for Baby Z’s first trip to the New.  And with a little bit of luck, her second trip will happen sooner rather than later! 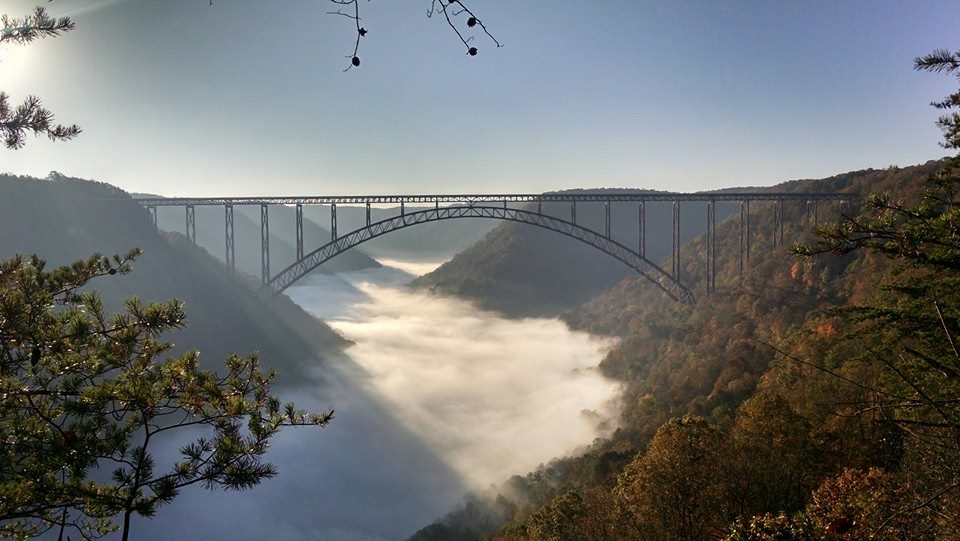 Gorgeous image of the gorge, captured by my friend Javier Licon this weekend!