So far it’s been a pretty wet autumn here in the Southeast…so our family was psyched to see good temps with no rain in the forecast this weekend.  We cut out of town just after lunch on Friday, bound for the High Country – that beautiful stretch of the Blue Ridge mountains that lies in the western part of NC.  We arrived just in time to set up camp and enjoy a hike to the summit of Table Rock.  With breathtaking views of the Linville Gorge wilderness as far as the eye can see, it was the perfect backdrop for a family picnic dinner, and a great start to our weekend.

Day 1: HAWKSBILL
The next morning was chilly and pretty windy…probably not the best day to climb at a shady crag situated on an exposed ridge.  But the friction on the rock was fantastically sticky-icky, a definite plus considering the thin, technical nature of most of the climbing here. It had been years since Steve and I had climbed there, long before we’d even started to talk about kids, and we’d forgotten just how intense the hike was – a long, uphill trudge that gets progressively steeper until the climber’s trail breaks away from the main hiking trail and starts heading around the ridge. Once the cliffline comes into view, there’s another quarter mile or so of rock hopping and scrambling down the gully at the base.  I am SO PROUD of my little 4 year old beast that did the entire approach both ways on his own power with really very little complaining.  It took a lot of hiking bears, but his efforts were definitely deserving (a lot of the scrambling section was 5th class climbing for his little legs!) 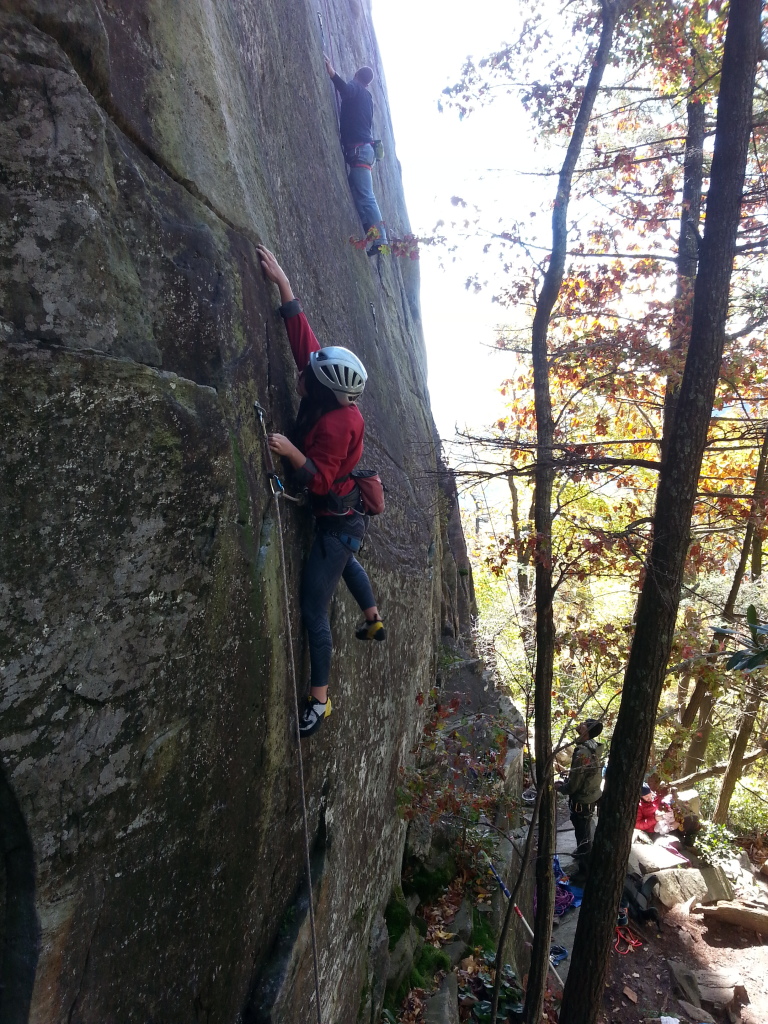 If You Bolt It, They Will Come (5.10a) – This was the warm-up, although I use that term rather loosely.  It was a great chance to get reacquainted with the rock and cryptic style of climbing there, but “warm” is not a good word to describe how we felt on the first climb of the day!
Psuedo-Hardmen (5.11a) – Thinny thin moves with pretty terrible feet, with a thought-provoking crux that our crew each did one of two different ways (HINT: shorties head left, tall folk to the right!)  The crux holds were surprisingly small for the grade, and I was pretty stoked to get the flash.
Hard Rock Cafe (5.12c) – The past couple of months I’ve been feeling a bit at loose ends with regards to outdoor climbing.  “You need a project to get psyched about!” the Crag-Daddy has pointed out on more than one occasion recently.  So when a friend of mine told me this route would play well to my strengths, I decided to give it a go, despite being pretty intimidated by the grade.  It’s a short little number (around 50 feet) that starts out with a crimpy V5 boulder problem that is as technical as it is powerful.  The boulder crux ends just after the 2nd bolt with a toss to a hero jug.  An awkward mantle-ish move and an even more awkward clip leads directly into the rest of the route – a rapid-fire ladder of half-pad crimps to the top (with one bigger clipping hold thrown in at the 4th bolt to give your fingers a break.)  My first time up I surprised myself by getting through the boulder problem in just a few tries, and from there I went bolt to bolt.  The holds were really hard to see, so my strategy was to climb to the next bolt, then lower back to tick the holds for that sequence before moving on to the next section.  The upper climbing is probably only 5.11, and while I did all the moves first try, the terrain was very sustained and I knew it would be really difficult to link all the moves together coming in hot.  But since I did so well on it I knew I owed myself another go. 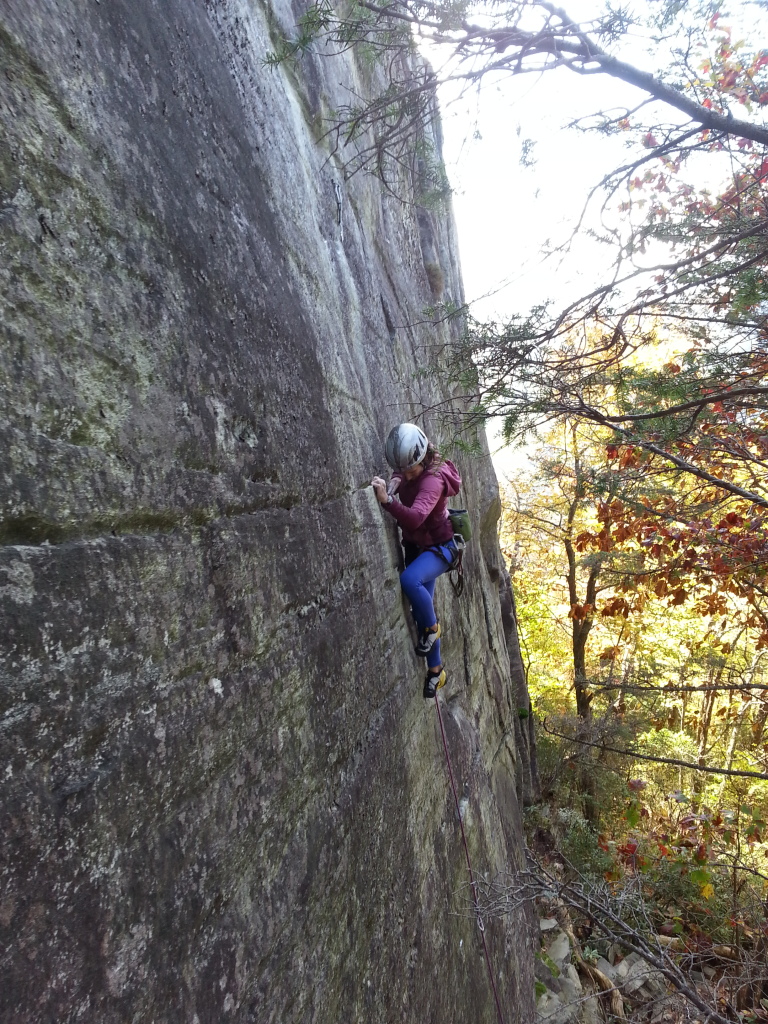 Trusting the rubber on the brand new Tenaya Tarifa on Psuedo-Hardmen 5.11a. (Photo: Emil Briggs)

At the end of the day I tied in again…and amazingly enough made it through the opening crux! The next clip was substantially easier with the draw already hung, and before I knew it I found myself at the 4th bolt rest.  “I might actually send this!” I thought to myself, and took off running for the top.  But by the time I got to the next bolt, my fingers were fried.  My core strength was fading and my body started sagging with every hold I latched onto.  I kept pushing, and actually made it about 3 more moves before I peeled off trying to stand up on a high foot right before the last bolt.  And that was that…so close!  But really yet so far…even though I only had a few more moves left, finishing it up felt pretty desperate even after hanging. 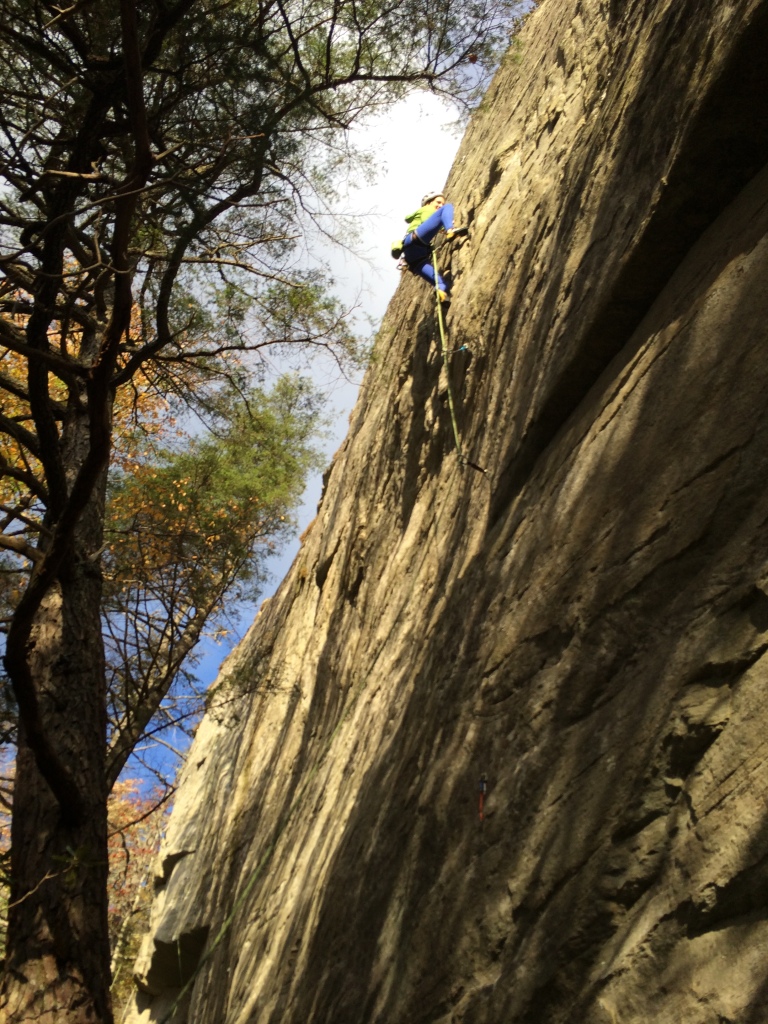 The upper part of Hard Rock Cafe 5.12c…right before I popped off.

Day 2: THE DUMP
Although everything in me wanted to go back and try Hard Rock again the next day, it was even colder and windier than the day before, and we were all psyched to climb in the sun.  (Not to mention I couldn’t make Big C do that hike two days in a row!)  So we headed back down the mountain to our favorite cold weather roadside crag…The Dump!

Voodoo Child (5.11a) – This is one of my favorite routes ever, and I try to do it every time I’m there, although it doles out a pretty good pump for a warm-up.  But it sure did feel good to feel the sun on my back!
Not Too Keen (5.12c/d) – My friend was working this, so I took a toprope lap on it for kicks just to get a feel for the moves.  It’s got a 2-move wonder crux sequence sandwiched between (comparatively) fairly easy climbing, but those two moves are insanely hard – pulling hard on itty bitty  crimpers with imaginary feet.   Getting set up for the crux is pretty difficult as well.  I was psyched to be able to actually do the crux moves, so maybe sometime down the road this would be a good project.
Last Glitch Effort (5.12a) – This is one of my favorite climbs, I sent it a while back during my “12 5.12’s in 2012” goal.  The first crux is kind of scary because it’s not that high off the ground, so we all took a toprope lap to rehearse the hard moves.  I toproped it clean, but felt pretty timid when I tried it on lead.  I had a hard time committing to the first crux, and then the rest of the time I felt like I was climbing “not to fall” rather than “climbing to send.” 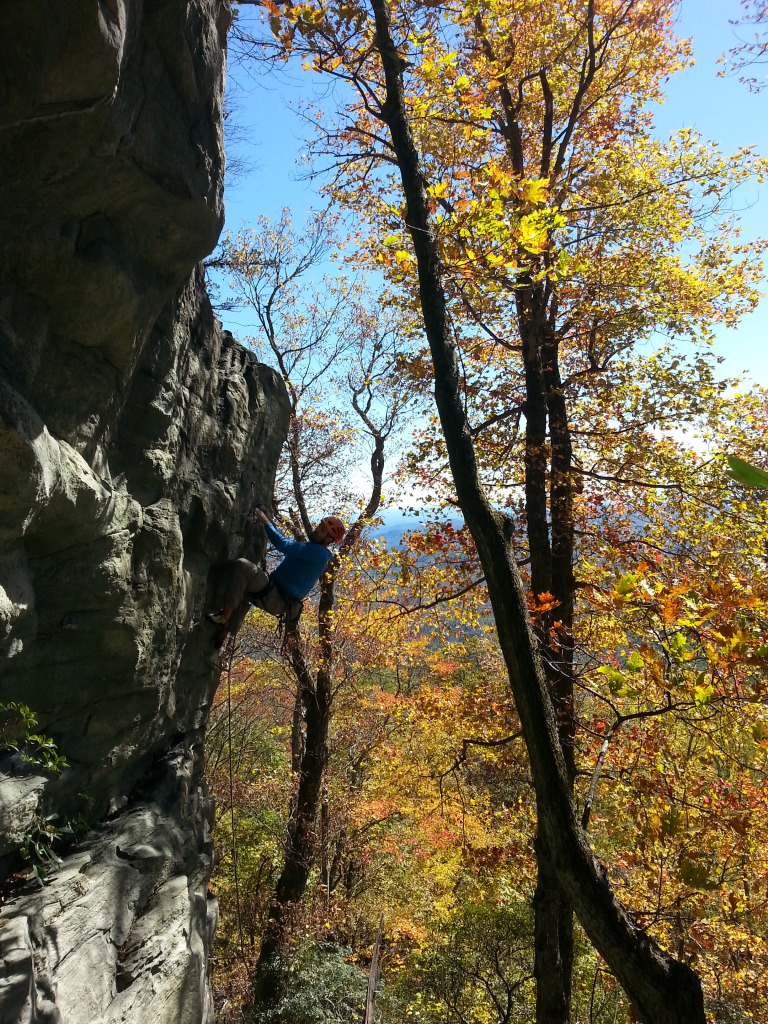 Steve finishing up Dimpsy-Dumpster 5.10, one of the few steep routes at crag. (Photo: Emma Briggs)

But I got through it clean, making that route my first 5.12 after having Baby Z!  Reaching that first 5.12 milestone in my second postpartum climbing journey feels really good. Yes, it was something I’d sent before, but doing it again signifies to me that I’m getting back in the shape I want to be in.  And as much as I wanted to be disappointed about my almost-send on Hard Rock Cafe the day before, it really just lit a fire under me – just the confidence boost I needed.  (The only problem now is that it’s going out of season and odds are good I’ll have to wait til next spring to try it again…)  But lucky for me it’ll still be there waiting, and in the mean time, there’s plenty of good climbing to be had other places!

2 Responses to “Adventures in the High Country…and First Postpartum 5.12!”