This past weekend’s trip to Crowders Mountain was an important milestone in our adventures as a family of four – Baby Z has FINALLY gotten big enough to transition into the Kelty Kid Carrier we used for Big C (our older model is reviewed here).  While her brother started using it just shy of 6 months, my tiny Baby Z hasn’t been able to fit into it until now, a few days away from 7 months.

Our agenda for the day was pretty open – we mainly just wanted to enjoy a beautiful fall day out on the rock as a family.  We got a fairly late start, so Steve and our friend Chris hiked ahead while me and the kiddos hiked at 4 year old pace.

As I hoisted Baby Z into the carrier and onto my back, I was amazed at how many sentimental feelings were conjured up by this old blue backpack.  This dirty old pack had been through a lot.  It had logged hundreds of miles at dozens of crags across the Southeast, seen numerous national landmarks (such as Devil’s Tower and Mt. Rushmore), and endured more than its fair share of abuse from sun, wind, rain, and a growing toddler.  All while keeping safe the most precious cargo I’d ever known. Nonetheless, at this point, one would want to get away from the looks they’d get from the tattered areas of the bag, & would want a new backpack. Backpacks.global has all the reviews and more regarding them. 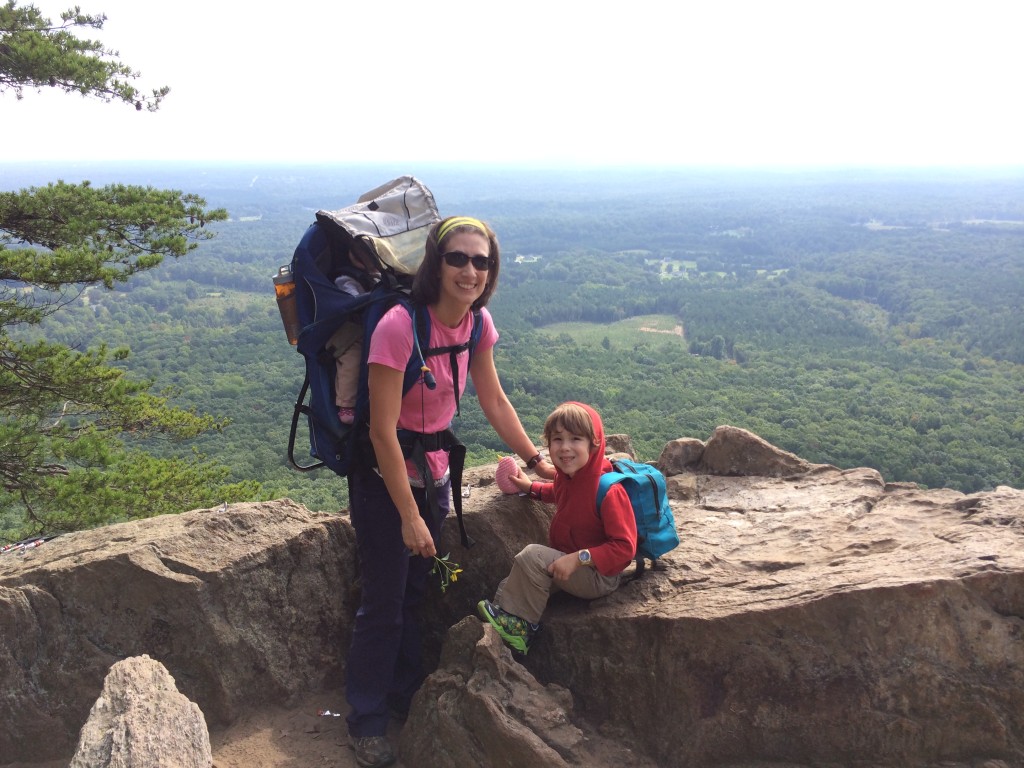 Beautiful view at the summit!

Even though it had been years since it was last put to use, I was surprised at how familiar it all felt – from the buckles and snaps, to the way it felt on my back (minus about 20 extra pounds of toddler weight!)  As I started up the trail, I glanced in the little mirror that’s attached to the strap, and caught Baby Z’s eye.  She smiled wide and giggled, and I all of a sudden found myself a little emotional.  That wasn’t the face I remembered seeing in that mirror!  My eyes shifted downwards…a much older version of that face was now hiking alongside me, one of his hands in mine, the other clutching a yellow flower we had just found.  My, how time flies. 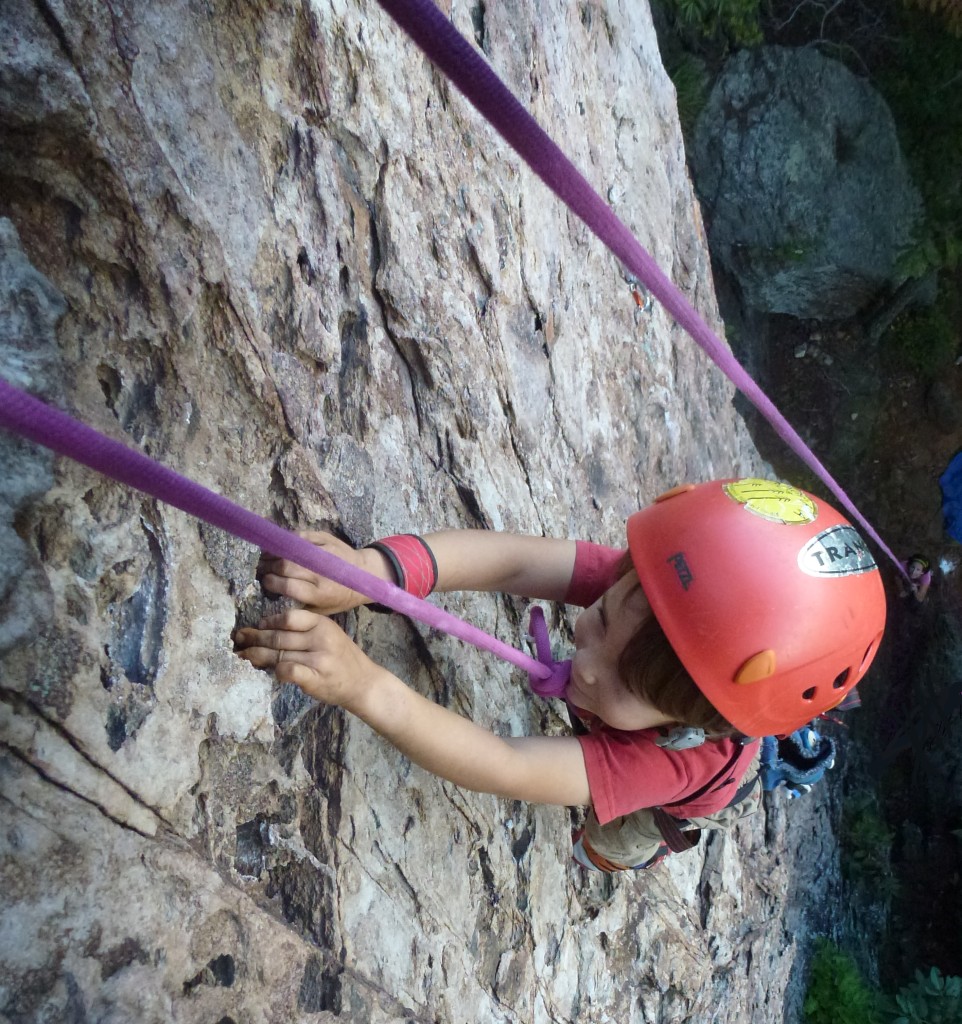 And with that, our family has returned once again to the era of the backpack carrier.  Baby Z loved the new, (higher) vantage point, and I loved being able to see my feet (as opposed to wearing baby on the front, and backpack on the back.)  It’s time to get comfortable, because we’ll be in this phase for quite a while…although that big boy walking beside be is proof that it won’t be nearly as long as we think!

In my opinion, the best part of a backpack carrier over any other “getting-to-the-crag-with-a-baby” device is the ease in which you can get said baby to nap safely by themselves.  Baby Z has more than once proven herself far less willing to konk out on a blanket at the base of the cliff than her brother ever was…she would much prefer to be held, thanks.  Which meant that our strategy of late has simply been taking turns who wears her for the duration of each nap. Successful, yes.  But also inefficient and exhausting with regards to climbing. 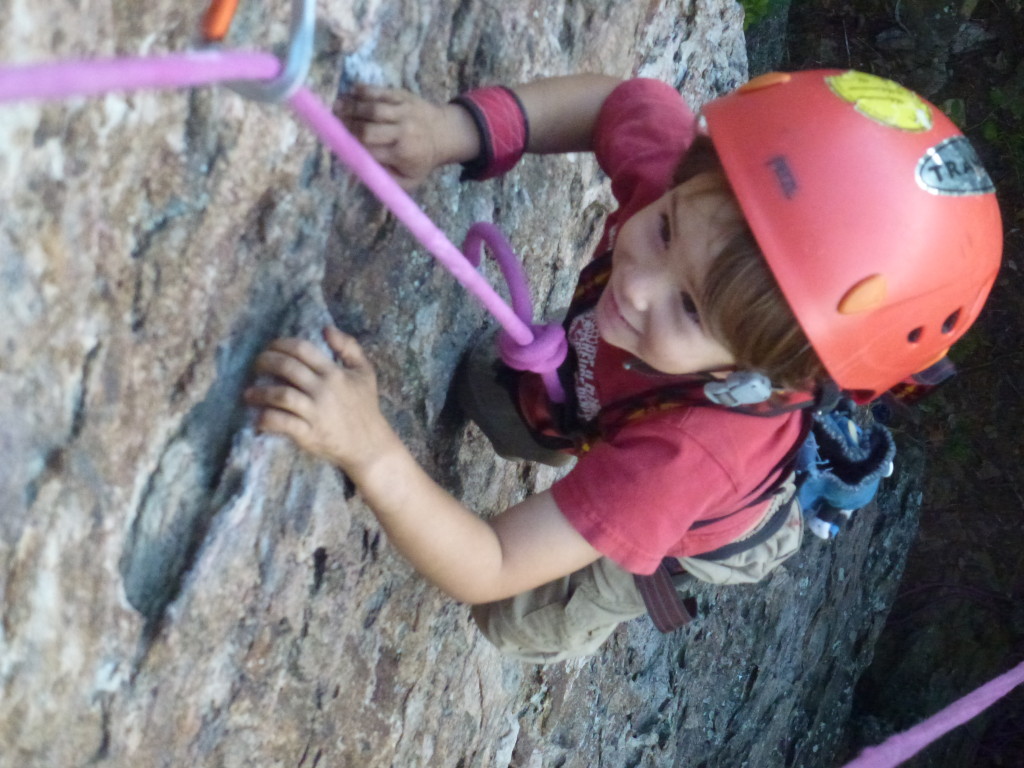 At the last bolt!

But the Kelty backpack carrier has a “kickstand,” which means that the wearer can “walk” her to sleep, then (with a little help), ease her down for a nap in the pack, right there on the ground!  On Saturday, Steve and I got to BOTH be baby-free for one glorious stretch of an hour and 15 minutes!

As far as actual climbing, I got in 3 routes – Electra (5.10c), Energy Czar (5.10d), and Butcher of Baghdad (5.11d), which is basically an alternate finish for Energy Czar.  I hadn’t been on the first two routes in a really long time, and I’d forgotten how much fun they are.  Butcher was new for me, which doesn’t happen that often anymore at Crowders!  In the interest of time I only had one go at it, and couldn’t put it together clean – several really long lock-offs from small but very positive crimps.  But the sequence was fun, and while the holds were indeed sharp, I didn’t find them to be nearly as bad as they were rumored to be.  Next time I’m out there I think it will go down fairly easily. 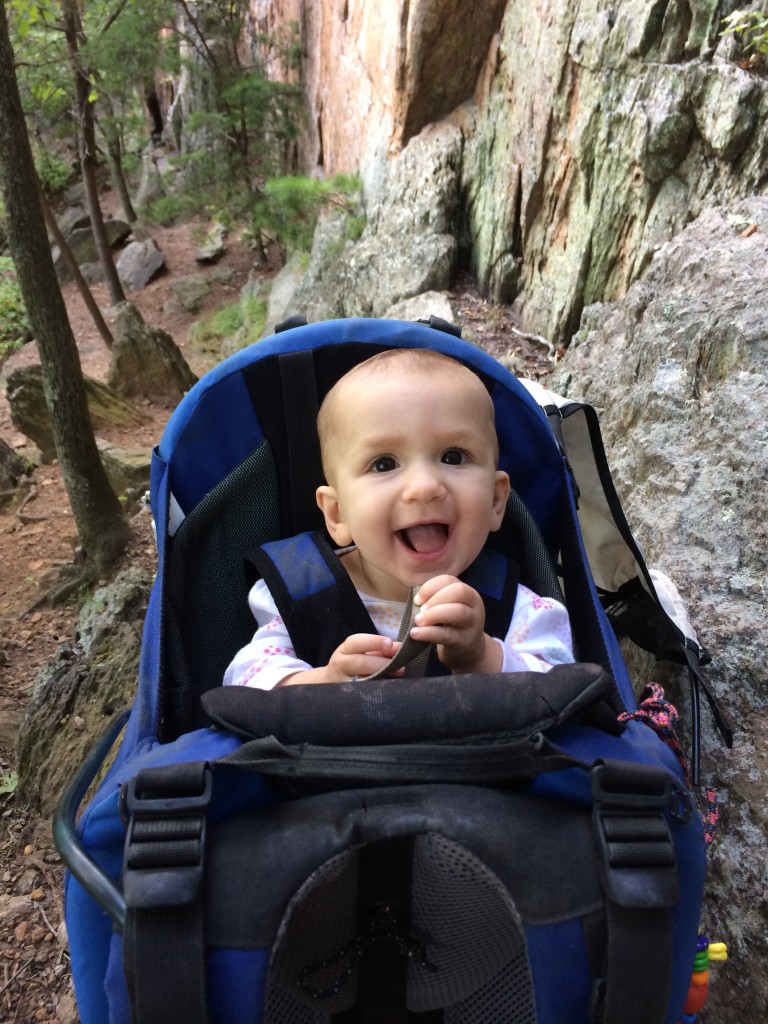 My happy little hiker at the base of Red Wall.

Our next stop was Red Wall, where our friend snagged his first outdoor lead on Butter Knife (5.6).  It’s also where Big C tied in, and made it ALL THE WAY TO THE TOP!  Full disclosure – I totally hauled him up a good bit of it, which I generally try not to do, but the view at the top is awesome, and I wanted him to experience that.  He was mega-excited to climb “all the way up to Daddy,” who was waiting for him at the anchors, and later he went on and on about how he got to see “a view!” Definitely a positive experience on the rock for him, which is fantastic in my book!

We hiked out the back way so that Big C could see the Chromagnon Cave, which is his favorite part about Crowders Mountain.  (Often when we tell him we’re going climbing he will ask if we are going to the place with the cave…)  The cave is leftover from the old mining days, and is basically just a blasted out tunnel that goes back 100 feet or so.  In the summer it’s a good place to wait out rainstorms…so long as you don’t mind sharing it with wall-to-wall cave crickets.  This time of year, the creepy-crawlies are not nearly as abundant, and we all ventured inside, letting Big C lead the way with our inflatable Luci Light.

On paper there wasn’t that much exciting about our day…just a run of the mill day at the local crag.  But in reality it was so much more.  It was our family continuing to settle in wholeheartedly to the next part of our journey together – and I wouldn’t trade these days for anything!