As most of us are probably all too painfully aware, little boys (and little girls!) grow WAY too fast…and growing feet need new climbing shoes on the regular, often before the current pair is worn out.  So far we’ve been pretty lucky in the hand-me-down department (we’ve got several pairs in the garage just waiting to be grown into!)  Just recently I noticed that Big C’s shoes had gone from comfortable to what grown-up climbers would refer to as “performance fit”…great for sending that project, but not so great for little feet that are still developing.  So we went into our stash of hand-me-downs and grabbed the next size up (which happens to be a pair of Mad Rock Monkeys).

When we got to the gym, I unveiled the new-to-him shoes, and he was VERY impressed by the monkey on the Velcro flap.  But what impressed me more was the conversation that happened next.

ME: “Look, you get to wear your new climbing shoes today.  I bet they’ll help you climb higher!”
BIG C excitedly, without any sort of hesitation: “Yeah and what if they make me fly!!!”

My mother-in-law recently told me about a similar conversation she’d heard my nephew (who is also 4 years old) have at his first T-ball practice.  When he stepped up to the plate for the very first time, he looked up at his daddy and asked, “Which fence do I hit it over?” 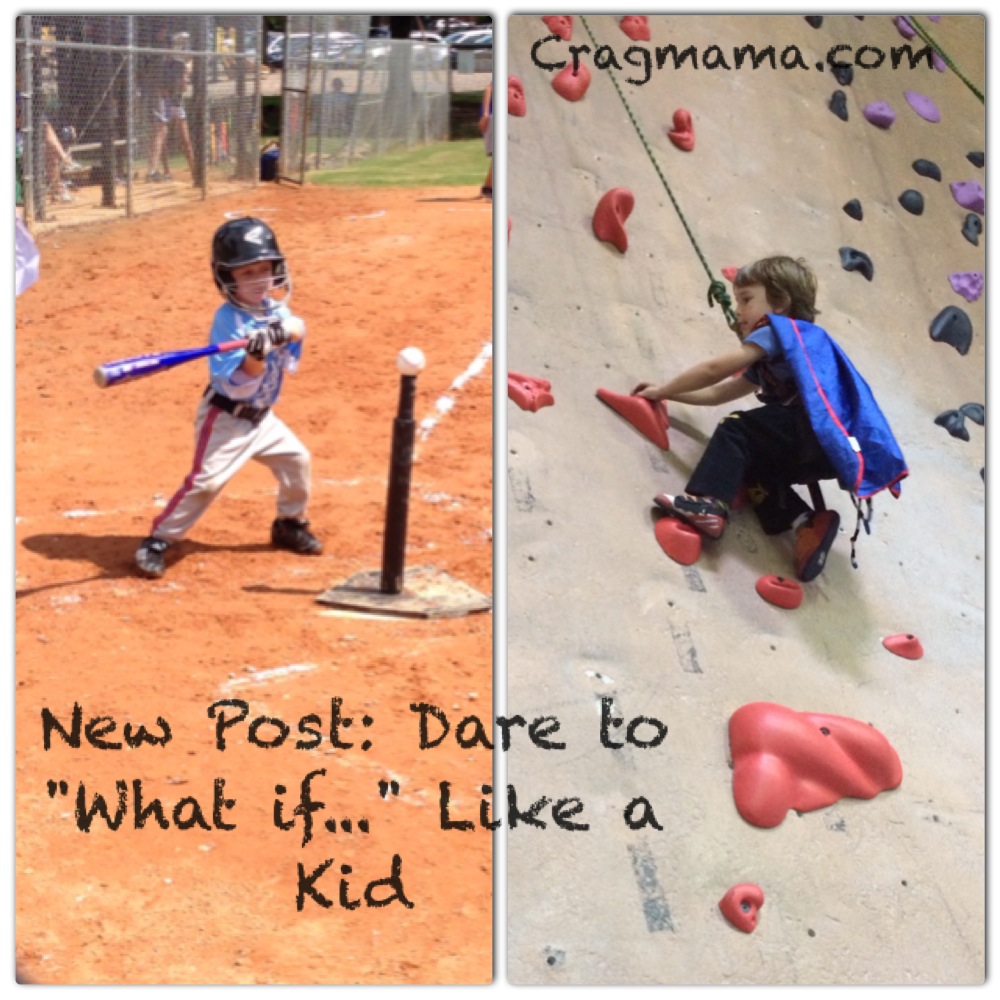 There’s something in the hearts of our kids that is not afraid to dream big.  Feats that may seem rather implausible to a grown-up (like flying or home runs) are part of everyday conversation for a 4 year old.  Big C simply assumed that he was going to climb high that day.  But his imagination took him past the confines of the climbing gym walls.  My nephew simply assumed that his first at bat would be a home run, it was just a matter of figuring out the minor details of where to aim his game winning swing.

I think we grown-ups can learn a lot from conversations such as these.  Often times we sell ourselves short, settling for mediocrity without ever even trying (or even considering!) anything greater.  Now granted, it’s pretty obvious that Big C’s new climbing shoes did not in fact allow him to take flight.  And it probably goes without saying that my nephew did not in fact knock the ball out of the park…yet.

But what these kiddos WERE able to do was imagine themselves achieving greatness.  And my prayer for both of them is that they will never lose that desire to reach their full potential, in whatever path life takes them.  For us, our dreams probably don’t involve flying or home runs.  But we all have things that we would love to do/be/see in our lives.  Conversations like the ones with my son and nephew can easily be laughed off as cute, silly, and childish fantasy – because they ARE all those things.  But if we look deeper, we can allow those little ones to teach us to dream MORE, and doubt ourselves LESS.

And just one day, they (and perhaps us too!) may surprise everyone when dreams take flight.