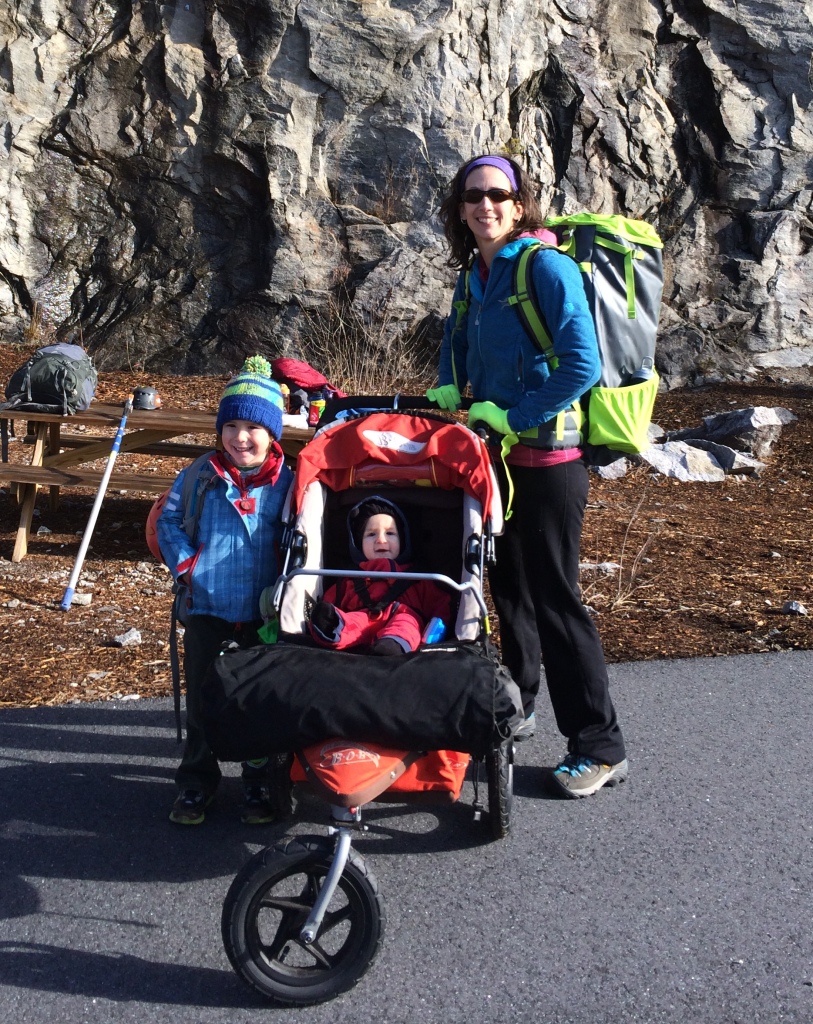 The ultimate in curbside climbing!

Last week there were two gorgeous sunny days in a row smack dab in the middle of the week, which amazingly enough fell on days that the Crag-Daddy had off work – New Year’s Eve and New Year’s Day. And what better way to spend the END of 2014 and the START of 2015 than at the crag with family and friends?

We wrapped up 2014 with a day at Rocky Face, which was an outdoor staple for our family during the latter stages of my pregnancy

.  For obvious reasons – the routes start less than 50 feet from the parking lot, and there are heated bathrooms! The routes are vertical to slabby (which was very belly-friendly!), there are great kid routes, and the whole area bakes in the sun, which means t-shirts in January!  Rocky Face was also Baby Z’s first exposure to outdoor climbing, although until last week we hadn’t been back since her first outdoor climbing experience at 5 weeks old.

Although I’d sampled a lot of the classics last season, it was all done via “preggo-pointing” (ie, toproping, since I had stopped leading by that point in my pregnancy.)  Needless to say it was an interesting experience to come back and try everything again on the sharp end sans belly!  Mostly, everything just felt way easier than I’d remembered!  My tick list for the day was: Flight Time (5.7+), Black Hole (5.10+), Double Roof Ballet (5.11c), Hardman (5.11b), and Quickdraw (5.11-). 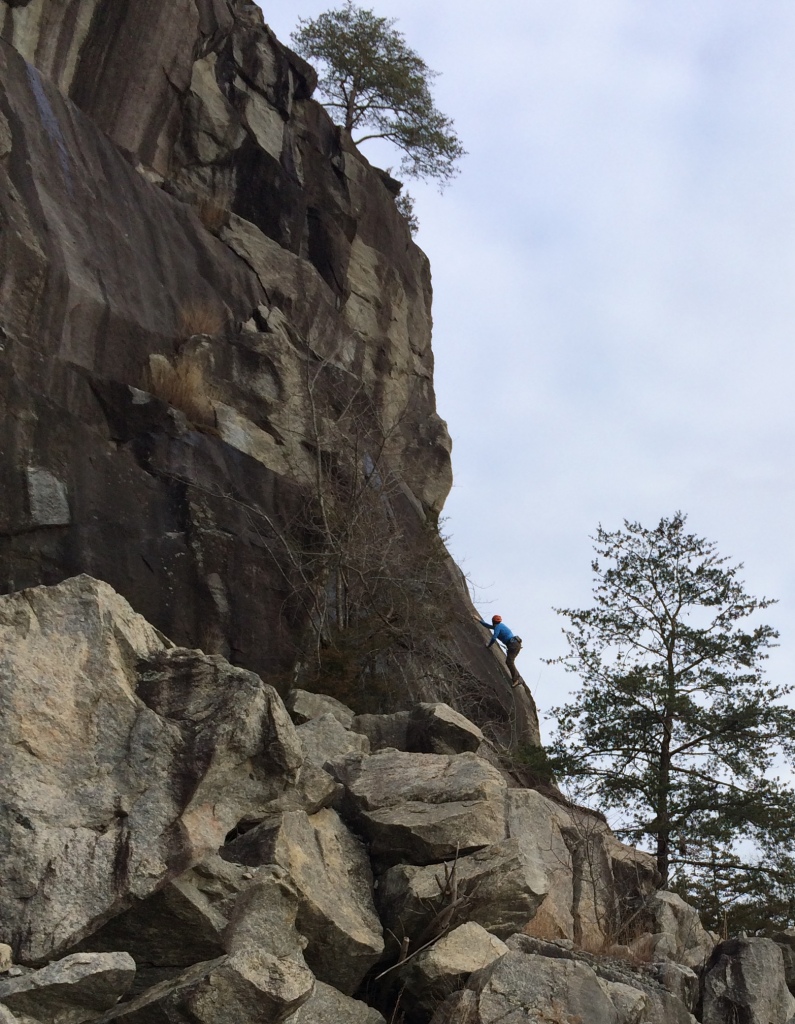 Crag-Daddy creeping up the slab of Somebody Get Me a Dew 5.11b

Big C got in on the climbing action, and sailed to the top of his route in fine style (apparently he’s gotten quite strong with all the gym climbing he’s been doing of late!)  Lowering off, however, was a completely different story, as he froze up about 20 feet off the ground and didn’t want to let go.  We haven’t dealt with a lot of climbing-related fears with him yet, so it took us by surprise, but after a lot of reassurance he was finally on the ground and all was well.

We still had some daylight left after our partners had packed up for the day, so we ended our day with a little bit of “treasure-hunting” (aka geocaching) before driving back. 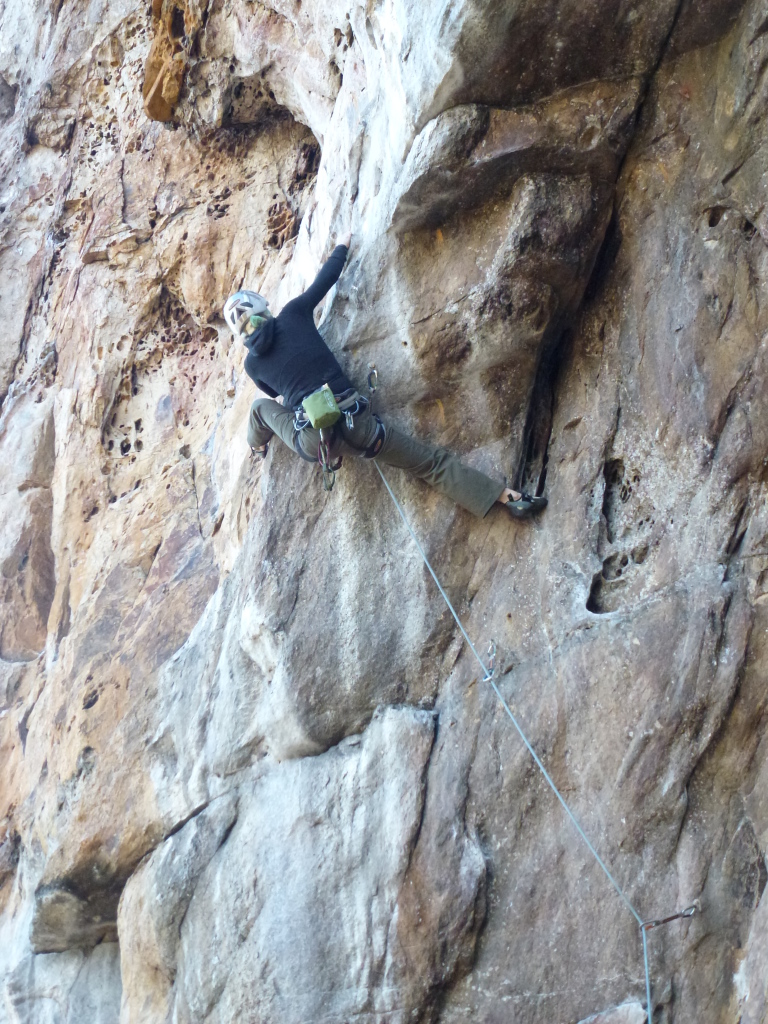 After going to bed at 10, then listening to fireworks at midnight with a wide awake baby ready to party, we welcomed 2015 in with a fairly mellow day at Hidden Wall.  We all warmed up on the token warm-up link-up, Path to Extinction (5.10a), then moved over to Elastic Rebound Theory (5.11d.)  I had never done the original finish, and Steve had never even been on the route at all.  The last time I’d been on this line was a steamy day in mid-August…a far cry from ideal Hidden Wall conditions (ie, cold and crisp.)  So I was pleasantly surprised at how much easier the crux felt this time around!  In fact, I’d say that the sequence rocking over the bulge is one of the coolest at Crowders. There are several finish options for this route, and the one we did follows a traditionally-protected corner (bring at least one half-inch piece!) all the way to the top of the cliff.

Big C’s favorite part of the day was swinging across the base from the Elastic anchor.  He took several turns, before we pulled the rope on each person’s burn on the route.  Baby Z spent most of the day eating homemade Larabars, which is a recent (and super yummy!) addition to our family’s trail food repertoire – if you’re interested in our recipes stay tuned, there will be an upcoming post soon!

Hopefully the weather was cooperating where you were and your family was able to get outside and spend some quality time together – feel free to comment below how you rang in the New Year!!!