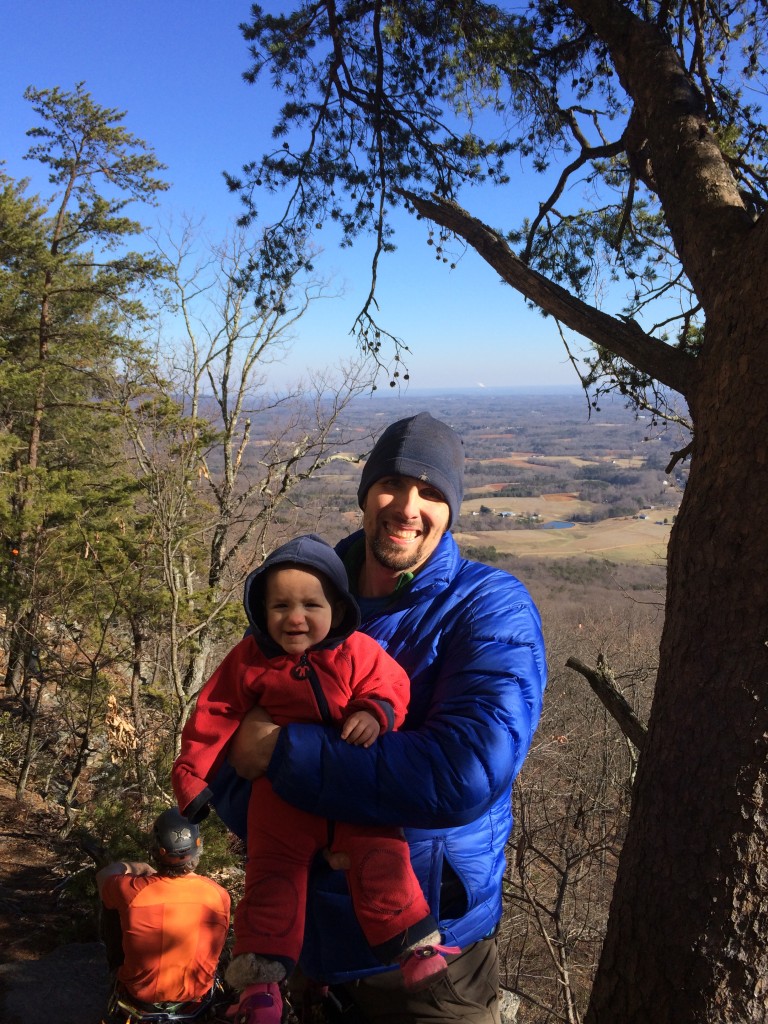 Last weekend’s adventures almost came to an abrupt end before they even began, thanks to a weird tummy bug that was indiscriminately making the rounds through our house.  It started out innocently enough with a mild case of upset tummy for Baby Z (which initially we thought could be teething-related), then climaxed in the middle of the night on Thursday when both Big C and the Crag-Daddy were doing a synchronized barf bucket routine.  Amazingly enough, the bug was apparently extremely short-lived because everyone, though weak as kittens, was finished with the involuntary stomach emptying by Friday morning.

That meant that by Saturday morning, everyone was ready for adventure, so we headed up to Sauratown Mountain, dropping Big C off along the way so that he could spend a day with the grandparents.  (The hike is a very steep 45 minute trudge that is fairly unrelenting…it would have taken those little 4 year old legs all day to get up there!)  Last year was the first in many years that it had been reopened – for 3 special access weekends on a trial basis.  I was 34 weeks pregnant and the weather was miserable…but we went, not knowing if we’d get the chance again!  But apparently the trial days went well, because this year the Carolina Climber’s Coalition has made a deal with the landowners, securing access during the months of January and February for the next 5 years! Woo hoo!

We started off the day with a stroll down memory lane, warming up on the jug-haul Texas Pete Rim Job (5.10b) before moving on to the crimpy, technical Skin Toy (5.11b).  Both were routes that we’d been on several years ago back in the day, prior to the closure.  I’d sent Texas Pete before, but it was by the skin of my teeth and I remember it feeling epic – so it was fun to warm up on it this time around.  Skin Toy was one that I’d only toproped, and certainly not clean, and I’d had designs to try and project it the next year…but then the cliff was closed and I never got the chance.  That being said, I had no idea what to expect out of it this time around – I’m a whole lot stronger now, but all I could remember was how tiny those holds were, and how intimidating it had seemed.  So I was super psyched to send it first go, hanging the draws! The holds were not nearly as small as I’d remembered, but the movement was just as fun! 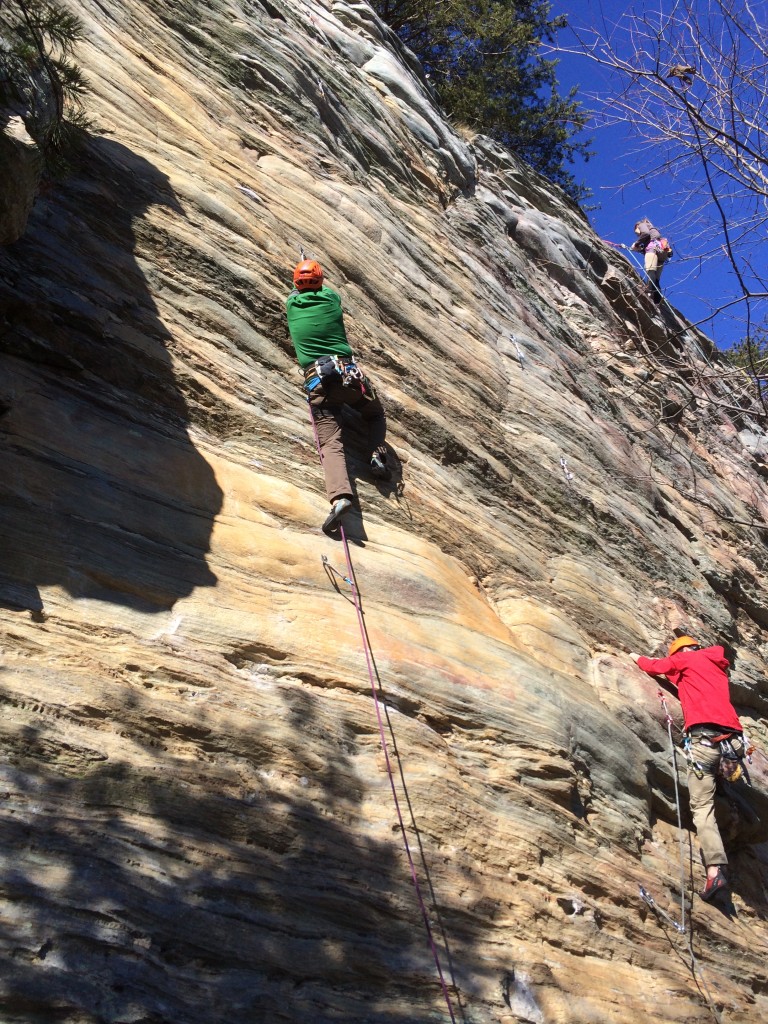 Lots of climbers on the wall! (and the Crag-Daddy rockin’ Skin Toy 5.11b)

Next I hopped on the very picturesque DC Comics (5.10a), which was definitely my favorite route of the day. It would be easy to write it off as just another “easy 10” on the wall, but this sucker should NOT be underestimated!  don’t let the grade fool you – this one is full value!  Definitely not for the newbie 5.10 leader – significant runouts, dizzying exposure, and spectacular position above the valley with a heroic finish.  If you are confident on 5.10 terrain, you owe it to yourself to climb this!

I ended day on The Amazing Joe (5.12b).  I did NOT send it, but invested some time in working out the beta, and I think I could maybe send it next time.  The crux for me was a big rock on move pulling above the roof, then the rest of the climbing is just going to be pump management through a few long moves between good holds.

The day was a nice balance of old and new, and I was reminded of all the great times we’d had at that crag back in our early days of climbing.  I was also reminded of how exhausting the approach is…but despite my out of shape sport climber legs I’m still psyched to get back there again sooner rather than later!

We spent Sunday at home, but then Monday morning we were back out in the sunshine again, this time at Rocky Face Park.  Since we’d spent our last visit ticking off the left side of the wall, it was now time to revisit the classics around the corner on the taller slab wall.  Almost all of these lines feature an opening slab that leads to a ledge (and often intermediate anchors), followed by face climbing and a cruxy finish. 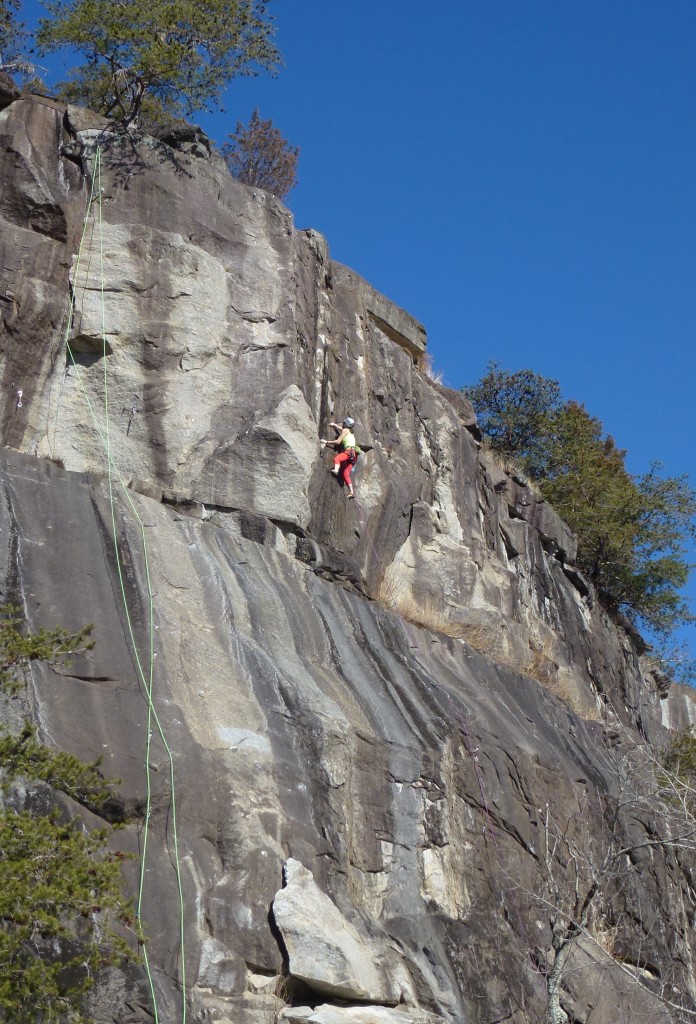 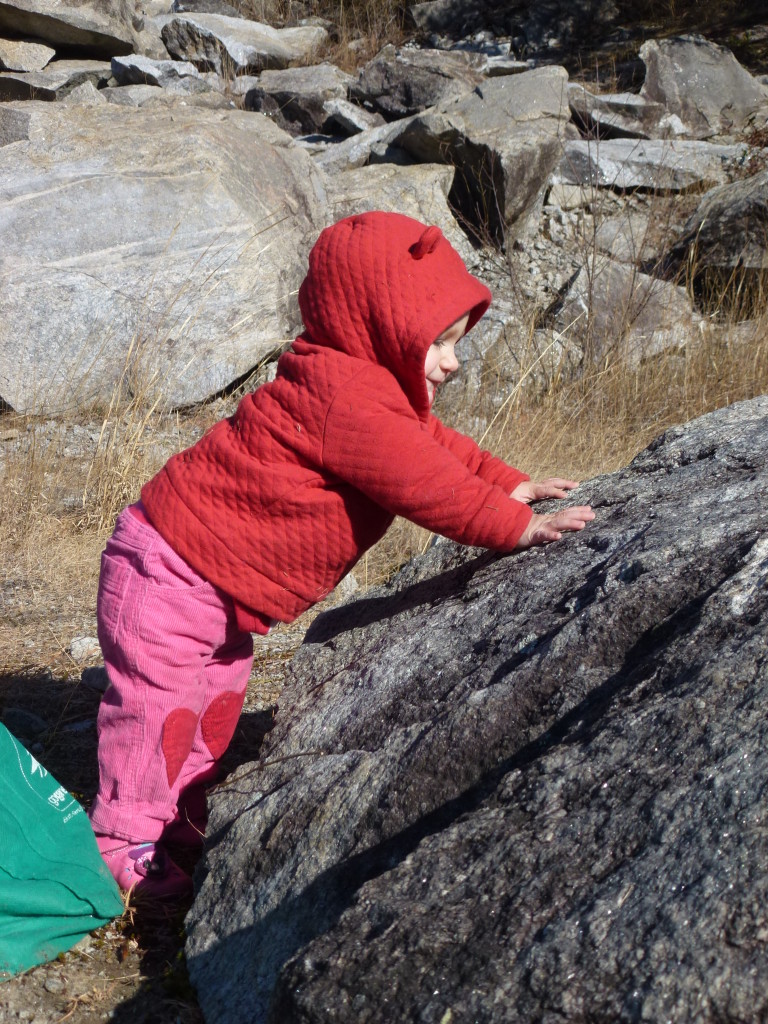 Everyone got their slabbin’ on!

I was a little apprehensive about getting on these again, as my previous memories were of my 35 weeks preggo belly interfering with all of the long reaches at the cruxes.  But as I found out a couple of weeks ago, I had grossly under-estimated how much easier everything would be without the aforementioned giant belly!  The day ended up being a pretty casual one, great for outdoor mileage (perfect for the Base Fitness phase of The Rock Climber’s Training Manual…more on that later!)  I started on Hidden-mite (5.11a/b), then worked my way down the wall, ticking off Somebody Open My Dew (5.11b), a newly bolted extension called Bullistics (5.10b), The General Lee (5.11a), and Snake Charmer (5.10c).

Though Sauratown and Rocky Face probably couldn’t be any more different as far as crags go, hitting them both in the same weekend was a great combination.  We will definitely be getting back to Sauratown as soon as we can while The Amazing Joe beta is still fresh, and the Crag-Daddy and I are now several steps closer on our quest to cross off every route at Rocky Face that’s 5.10 and up! 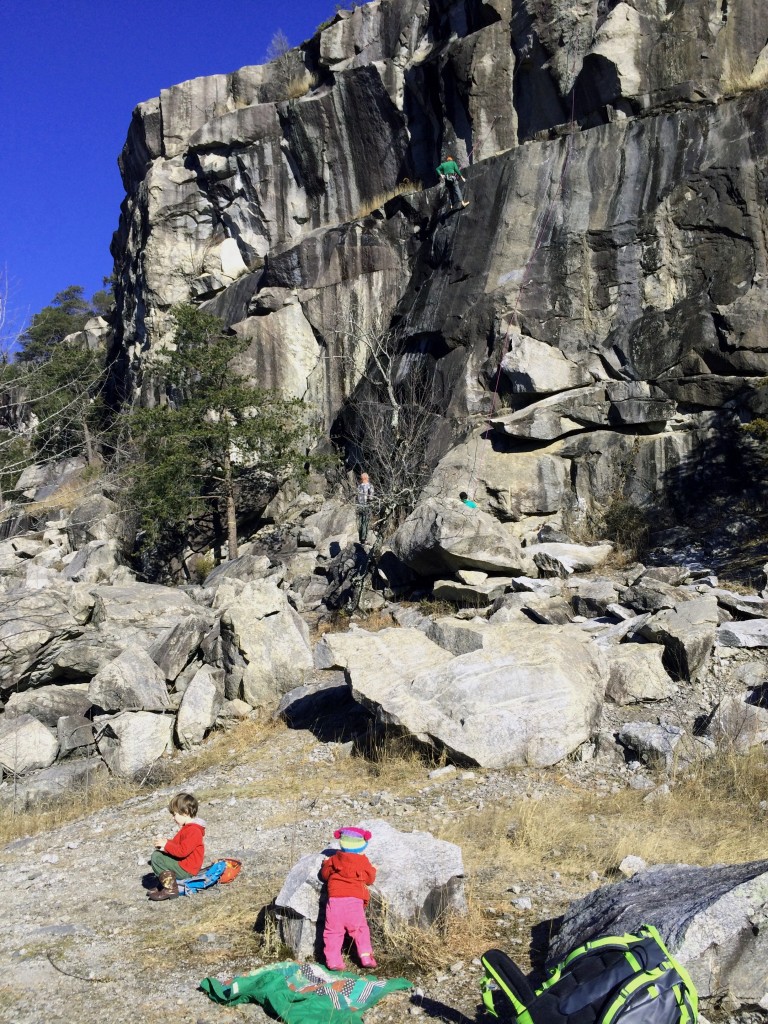 Crag-Daddy lowering off of Bullistics 5.10b as the kiddos play merrily at the base