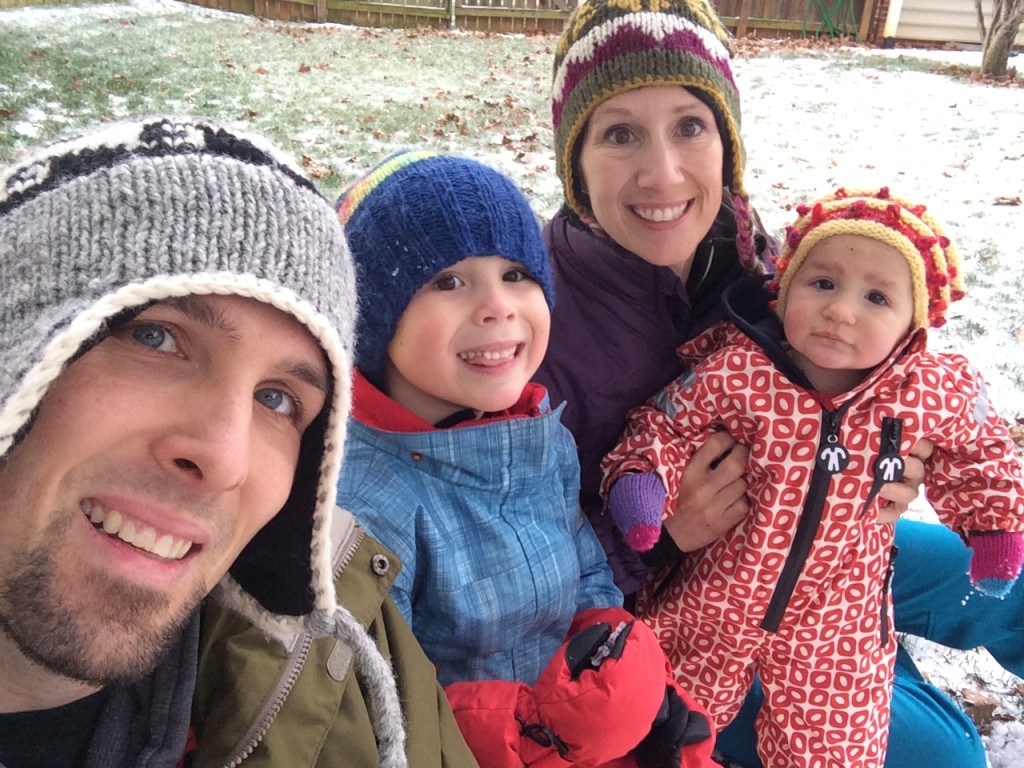 Earlier this week we Southerners got pelted with our annual “snow storm.”  Every now and then (like last year) we actually get a little bit of snow out of it.  This year was more typical, in that a few inches of snow were initially predicted…which of course led to frenetic grocery store runs for bread and milk…and then all we ended up with was about an inch of sleet and freezing rain.  But to kids (and grown-ups..) who only see snow once a year, any white stuff that attempts to cover the ground is considered snow, no matter how crunchy (and slippery!) 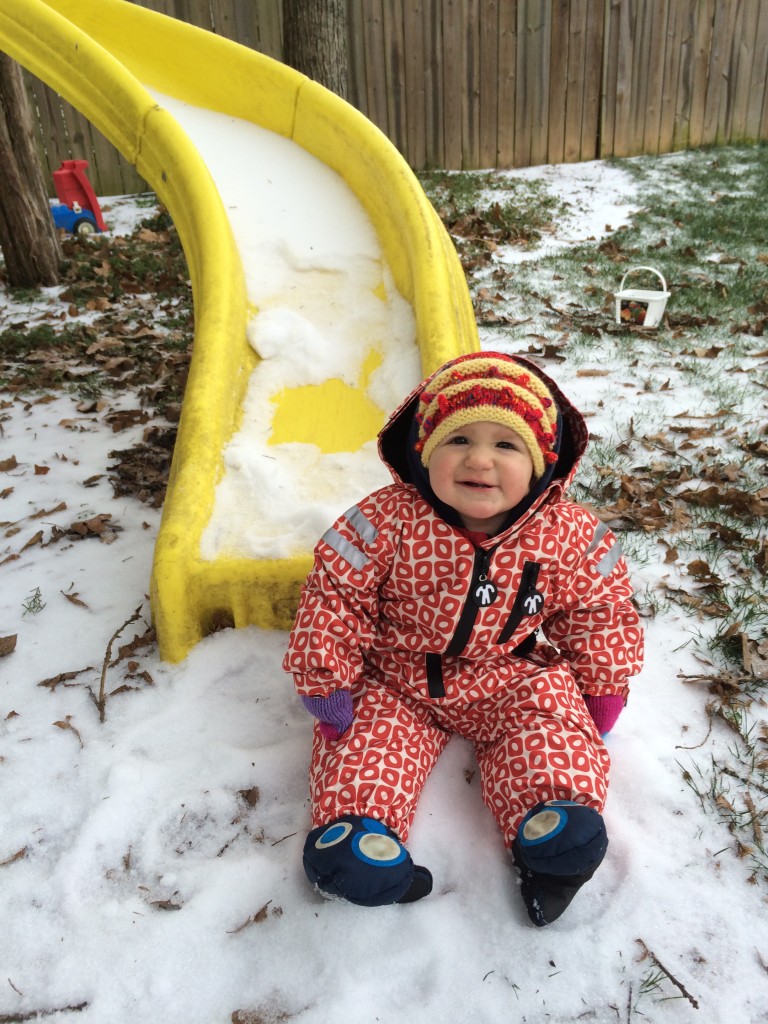 So after breakfast the first order of business was to put on our snow clothes and head outside to play. (Because once the sun comes up those roads melt away faster than butter in a frying pan.) The roads and grass were solid ice, but what conditions lacked in snowman-make-ability, were made up for in slip-sliding around.  It sure was a happy day – the Crag-Daddy was happy he was working from home and could join in some of the fun, and Big C was happy he got to dust off his sled.  Baby Zu was happy about her new wintry experiences, and I was just happy to not be 8.5 months preggo like I was for the 2014 storm!

Although Baby Zu was all decked out for the occasion in her finest Ducksday gear just like her brother (our hands down fave brand for winter gear – reviewed here, here and here), she was a bit lacking in the glove/boot department.  All we had for her hands were some knit mittens (ie, not waterproof), and for her feet we had some fleece booties, which although warm, were also not waterproof. (We’ve also got a bunting suit that can cover feet and hands…but it’s goose down and can’t get wet…)  Our solution for her hands was just to keep her little mitts tucked away inside her Ducksday gear, which was pretty easy since the sleeves were long anyway.  For her feet we actually used a pair of Big C’s mittens – and it worked out surprisingly well!  Not only did it keep her feet dry, but it also added some insulation.  (Another popular thing to do in the South is the old plastic bags and rubberband trick over regular boots, which is what we were about to resort to until we had the mittens idea.) 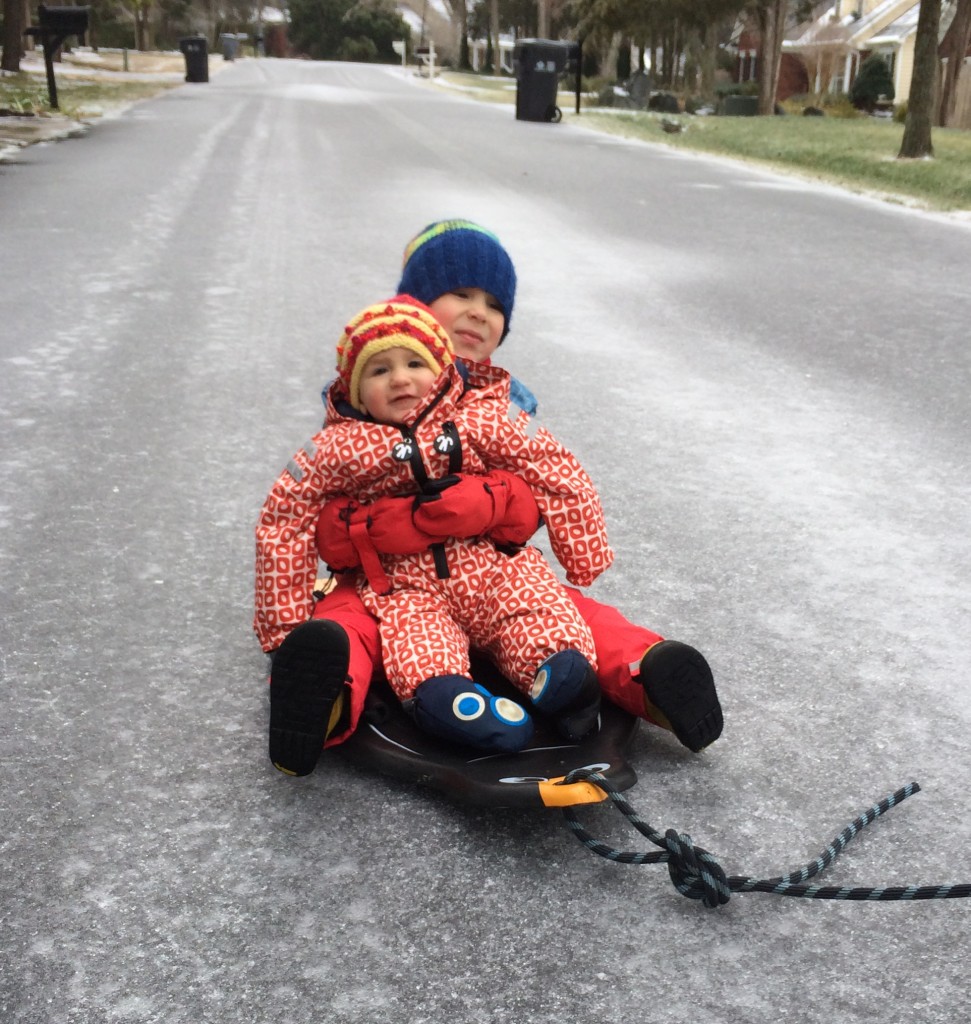 I love it when they are sweet to each other.

She seemed happy as a clam with the arrangement (once we got outside that is!), but I was a little worried about frostbite and those little hands, so we came back in after about 30 minutes of cruising in the sled with big brother and riding on Mommy’s back in the Boba.  It worked out great that the Crag-Daddy was working from home, because once she went down for her morning nap Big C and I took off for the local sled hill (aka golf course adjacent to our neighborhood.)

We weren’t the only family with the idea, which was helpful because the ice was FAST (and difficult to slow down on) so we needed a couple of grown-ups stationed at the bottom of the biggest hill to keep everyone out of the pond (which of course was not frozen over in the least.)  Big C wasn’t too keen on riding by himself with the water hazard in play, but he was psyched on the tandem idea, which meant I was able to get my sled on.  It was a blast, especially since I my giant belly prevented me from enjoying the previous year’s winter weather to the fullest.

On the way back we stopped to check out all the deer tracks.  Even though we live in a fairly urban area, I love that we have so many signs of wildlife in our neighborhood! 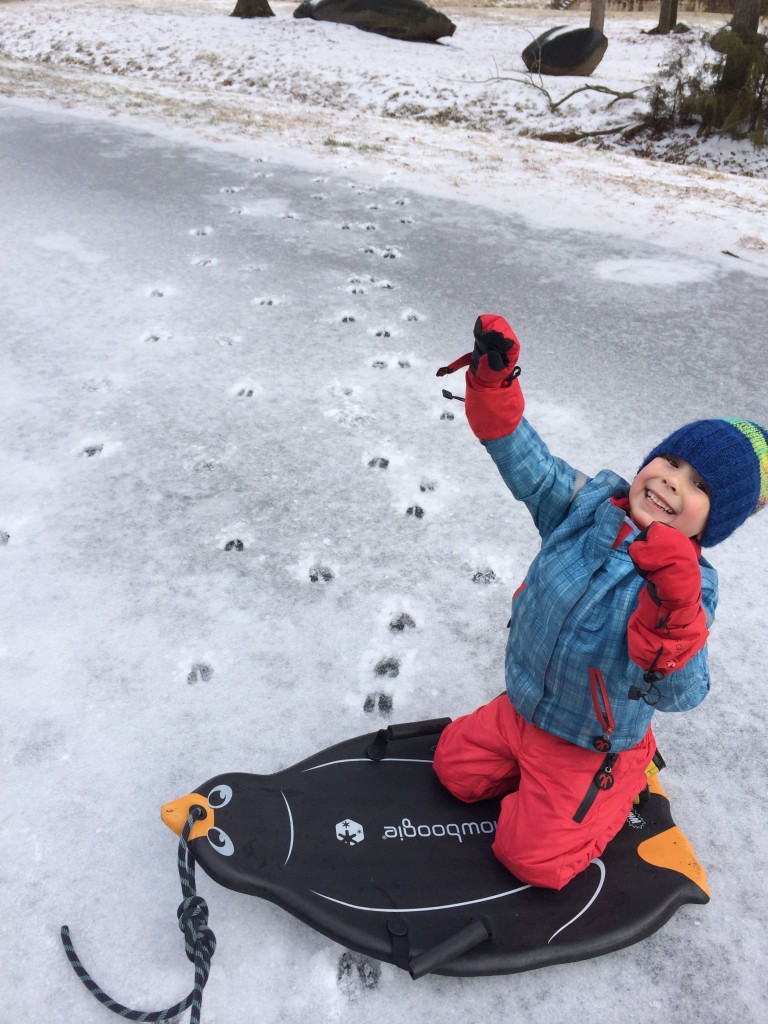 By the next morning the ice was almost completely gone (although school was of course still cancelled…but that’s another blog post entirely.)  But we patrolled the neighborhood all afternoon looking for “snow mounds,” ensuring that we squeezed every last drop out of our annual winter weather. 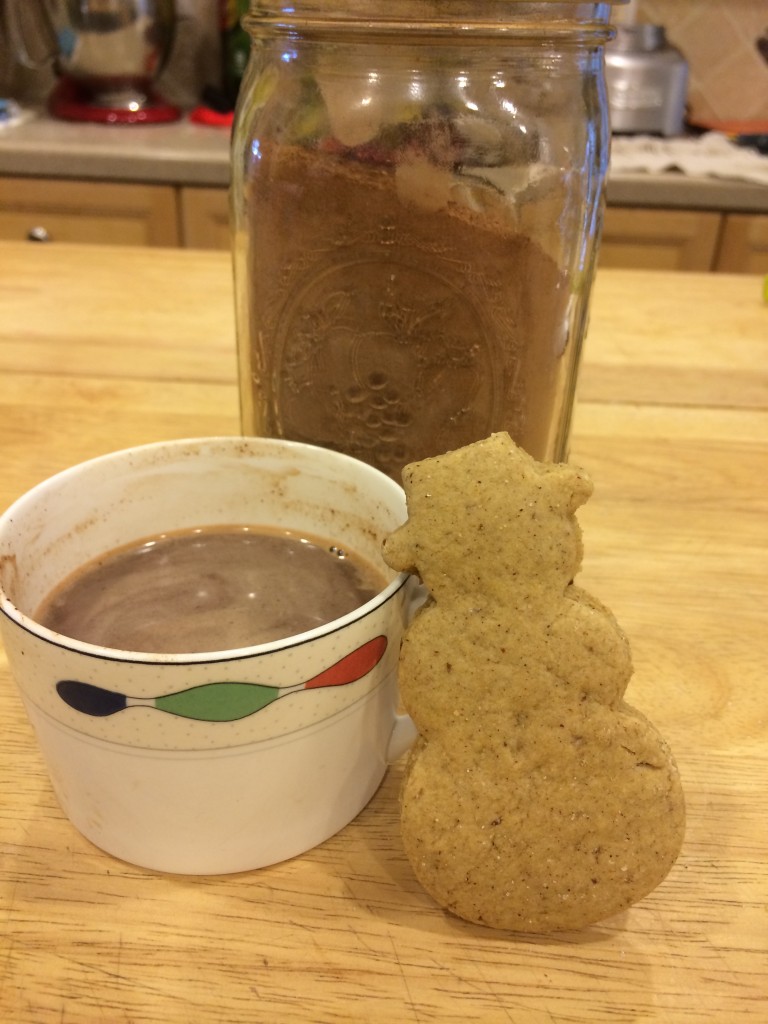 And what “snow storm” is complete without hot cocoa?  We whipped up a triple batch of a dark chocolate mix and delivered some to neighbors, along with some homemade “snow-grahams.”  The cocoa hit the spot and the graham crackers were SO much better than storebought…even though I realized later that I forgot to add the brown sugar!  Both were easy to make and recipes can be found here and here.  In the interest of full disclosure, I also tried my hand at making marshmallows from scratch…but that didn’t quite work out…