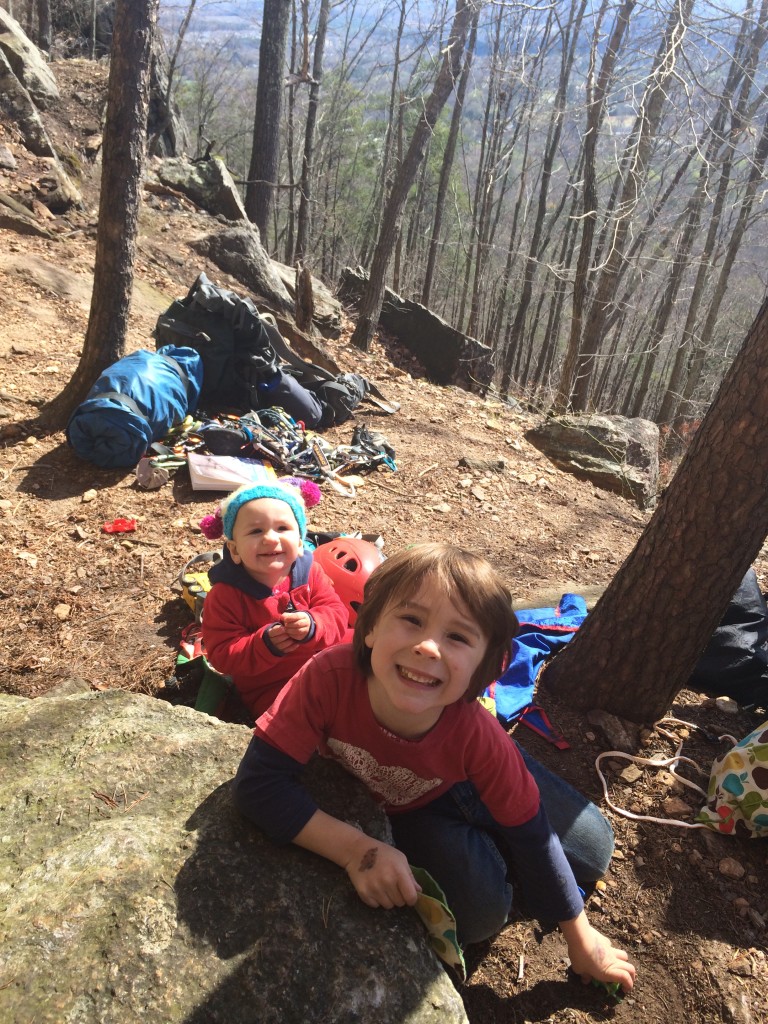 Happy kiddos at the crag!

We finally had an entire weekend free to head up to the New River Gorge, which of course meant it was going to be snowing and in the THIRTIES (after highs in the 60’s the weekend before…).  But at least the weather was good in our neck of the woods, even if it did feel more like a warm winter day rather than spring.  And even though we had to settle for Plan B, it ended up being a weekend filled with important milestones!

The whole family marched up to Red Wall at Crowders Mountain on Saturday morning.  Steve had his sights set on Silence the Critics (5.12b), I was hoping to send Axis (5.11d), and Big C was excited to try out the new hammock he’d gotten for his birthday.

The climbing on Axis is pretty thuggy, but also requires precise footwork on holds that are terrible to non-existent.  It starts with 20 feet of face climbing, before moving into a very aesthetic diagonal crack/seam, which contains two cruxes.  The initial technical crux apparently used to be a lot more short-lived until just a couple of months ago when a big jug broke off, followed by a pump crux exiting the crack.  After the crack there’s another 25 feet or so of moderate climbing.  There are 2 bolts on the lower face and 1 piton in the crack, the rest is protected traditionally.

Steve ended up sending his project on the 2nd go of the day (!), and the hammock worked out great except for a thankfully minor head injury when Big C flipped upside down out of it (I guess he’s hard-headed in more ways than one.)

As for Axis, it was the scene of three major milestones for me… 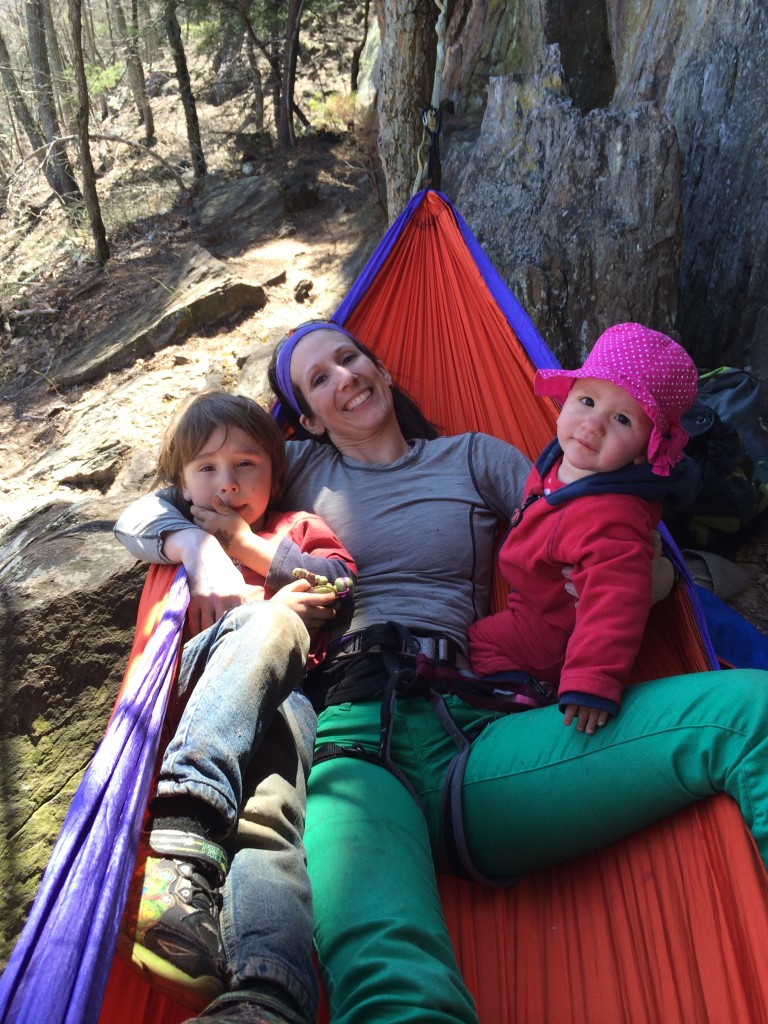 Testing out the new hammock!

Trad climbing has been sporadic at best for our family ever since Big C’s arrival – sport climbing logistics are just way easier to manage.  And we’ve placed ZERO gear since Baby Zu entered the scene.  But Axis was one of the few lines left at Crowders Main Walls that I still needed to tick, and since it was near Steve’s project it seemed like a good time to try it.  Since the anchors are shared with a great warm-up (Master Beta 5.10c), and since I’m kind of a trad pansy, it was easy to set up a toprope to work out the moves/gear.  I’d gotten in 2 runs on it 6 weeks ago…and while I was able to do all the moves on it, the thought of linking everything AND placing the gear felt pretty impossible.  But I felt a lot stronger on it this past weekend, which I credit to the power endurance training I’ve been doing out of the Rock Climber’s Training Manual (more on that next week.)

I took another couple of toprope laps on it on Saturday, then decided it was time to put my big girl panties on and tie in to the sharp end.  I got established in the crack, slotted the first nut, and breathed a sigh of relief, as the stance is pretty tenuous.  I eased carefully into the first crux executing my beta just as planned, but reached a little too high too soon and my smeared left foot slid right off.

I got back on and finished the route without much trouble, and though I was slightly disappointed to walk away without the send, it was the first time in a loooong time that I’d fallen on my gear (probably 2 years at least!)  No matter how textbook you think you’re gear is, it’s always a mental boost to actually put it to the test! 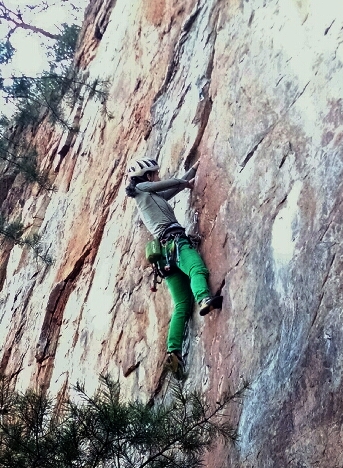 The forecast for Sunday was shaping up to be a little warmer, and our friends were all headed back out the next day, but we had originally planned to stay home.  With church we wouldn’t be able to get out there til noon, and Big C takes almost an hour to do the hike when his legs are fresh…it didnt’ seem worth the effort.  But my hero of a husband suggested that I head out there by myself the next day after church while he watched both kiddos!

It was the first time I’d climbed outdoors without Baby Zu, and the first time I’d climbed without any kids at all since spring of 2013.  I’d forgotten how much EASIER it is!!!  I arrived in the parking lot just before noon, my partner and I were at the base by 12:30, and by 1:15 we’d both done some warm-up pitches and I was tying in for my redpoint burn!  Seriously that process would have taken three times as long with the kiddos around!

I don’t say that to imply that I’d rather they not be around – I absolutely LOVE family climbing days, and would 99% of the time rather climb with them than without them.  But I mention it because it reminded me of how blessed we are to have such great climbing partners that are willing to put up with our traveling family circus almost every weekend!  Because of us they get in less pitches, carry in more gear, and are probably less focused than had they done a kid-free day.  So to all of our partners,  we probably don’t say it enough, but THANK YOU for all that you do for us! 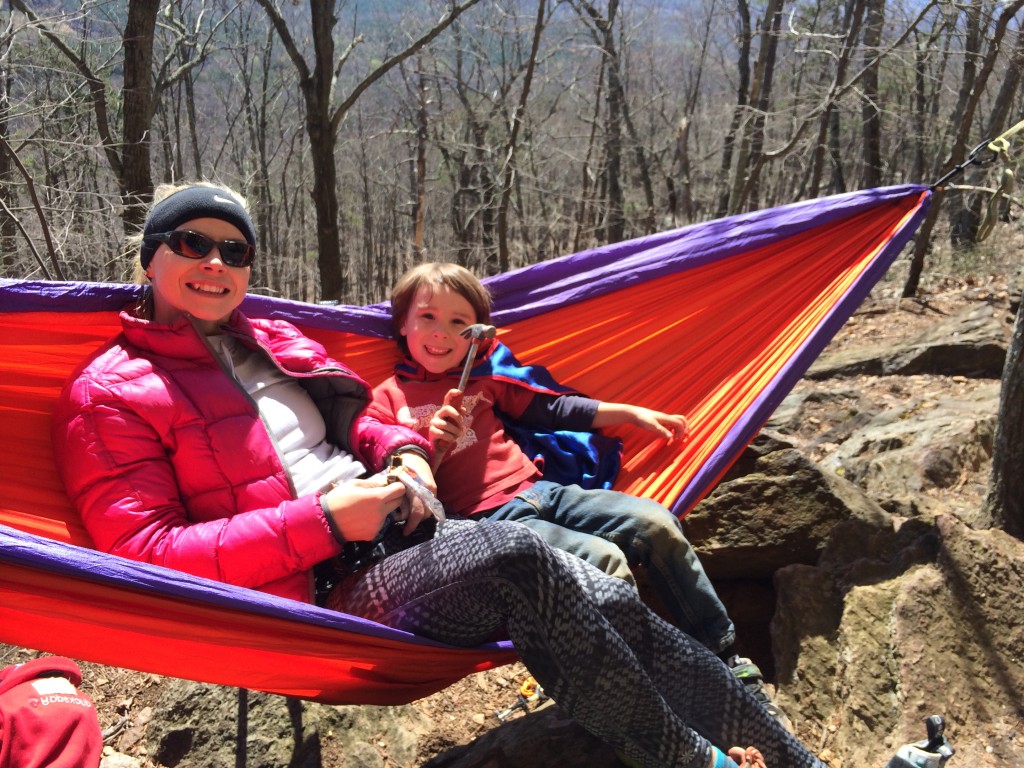 Big C enjoying some time with April, one of his fave climbing partners!

And the extra day was worth it – I sent Axis on my very first try of the day, making it my hardest send on gear to date!  I guess technically it’s mixed, but it’s definitely way more trad than sport.  Previously the grade was 5.11c/d, but since the jug broke there’s been talk of bumping the grade up a letter or 2.  My guess is that the grade is probably more settled in at 5.11d now, but I’d love to hear from any one else that’s done it in it’s current state. 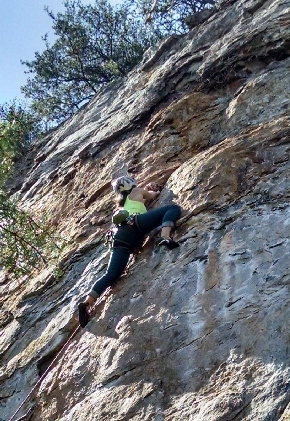 6 Responses to “3 Climbing Milestones in 1 Weekend!”