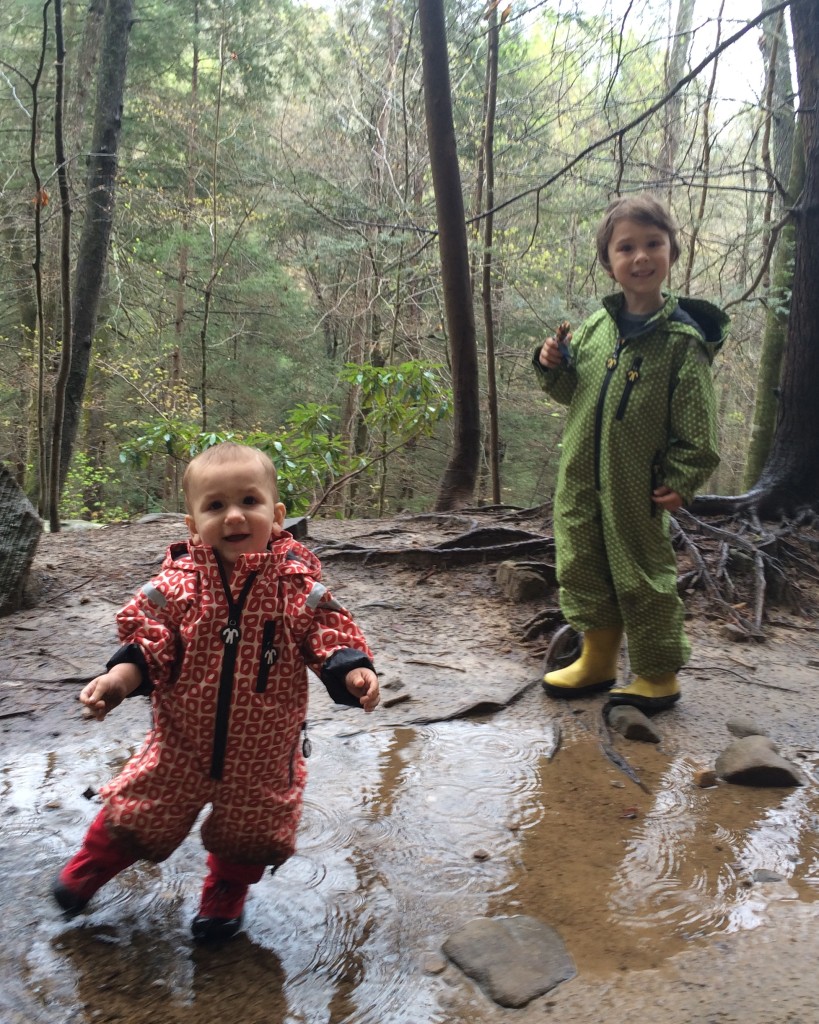 Thankful for Ducksday and MyMayu rain gear at Driveby Crag on Day 1!

Spring.  One the two times per year that our family heads to the Red River Gorge with the sole intention of obliterating our forearms.  For those of you not familiar with the Red River Gorge, the climbing style is the polar opposite of the climbing we typically engage in at our favorite weekend crag, the New River Gorge.  “The New” is all about technical face climbing – long, intricate, well-defined crux sequences involving tiny crimps and great footwork.  In contrast, most routes at “the Red” lack a distinct crux – the difficulty comes not in the individual moves, but in linking them all together for the send.

Practically speaking (and this is a big generalization), it often plays out that Red climbers come to the New and get shut down by stopper cruxes, whereas NRG climbers walk away from the Red with a whole lot of hang-dogs under their belt (Non-climbers: a hang-dog is when you get to the top of a route, but have fallen and/or rested on the rope along the way.)  The best climbers are the ones that spend equal time at both…but our family is hard-pressed to keep driving another 3 hours when the New is the perfect weekend distance for us!  (Not to mention, we just LOVE the New!)

That being said, this past weekend was Week 3 of my “performance phase” in the Rock Climber’s Training Manual, and I was anxious to see how things would go.  Our typical m.o at the Red involves a less than ideal climbing/rest day ratio (ie 4 days on), so pushing grade limits is usually a little too optimistic (since by the end of Day 2 our forearms are smoked.)  But on the flip side, since there is still a ton of rock we haven’t explored yet up there, it gives us a great chance to see how many onsights/flashes we can score. (Non-climbers: an “onsight” is when you successfully climb a route 1st try w/o any prior knowledge about it, and a “flash” is when you do the same, but with beta, usually from watching someone else climb the route.) 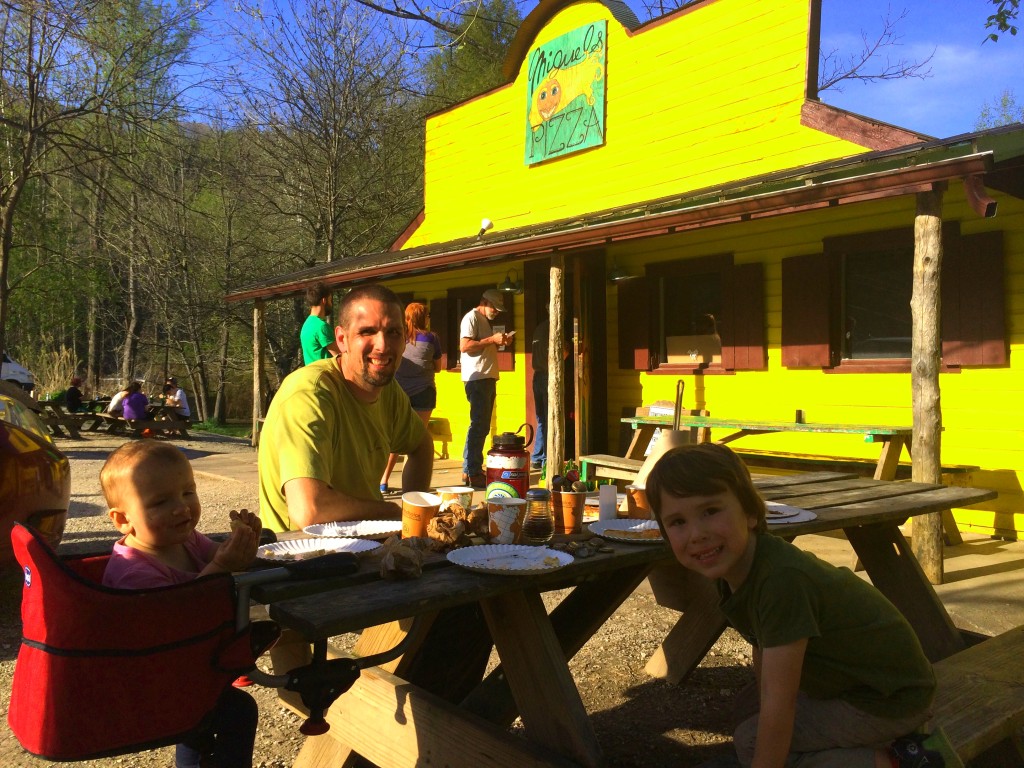 Every RRG trip features at least one visit to Miguels…

The forecast was looking pretty dismal at the beginning of the week, but by the time we left on Wednesday night, it had brightened up quite a bit.  In fact, the only rain we saw was on the drive up and on Sunday morning.

Nothing hard on the first day, just wanted to get a few good pitches under our belt.  We went to Drive By Crag at PMRP and did Make a Wish (5.10b), the ultra classic Breakfast Burrito (5.10d), and what ended up being one of my favorite routes of the whole trip, Whip-Stocking (5.11a).  These routes were steep, but not ridiculously so, and followed perfect pockets and flakes.  Just the right amount of pump for an afternoon session.

The second morning was our hardest climbing day, grade-wise.  I split time between 2 routes at Left Flank – Wild Yet Tasty (5.12a), and Mercy the Huff (5.12b).  The former I’d been on a couple of years ago and bailed, so this time I was psyched to touch the chains, and felt like my odds were good to send the next go, however I came up juuuuust short of the rail at the end of the crux and took a mighty fine whipper.  Mercy the Huff was absolutely amazing.  I mostly went bolt to bolt, and while I was able to do almost all of the moves first try, linking it together will take a lot of guns!  By lunchtime everyone was ready to move to another area, so I didn’t get a chance to try either route again, but next time I’m certain Wild Yet Tasty will go, and I’m also pretty sure I can give Mercy a run for it’s money. 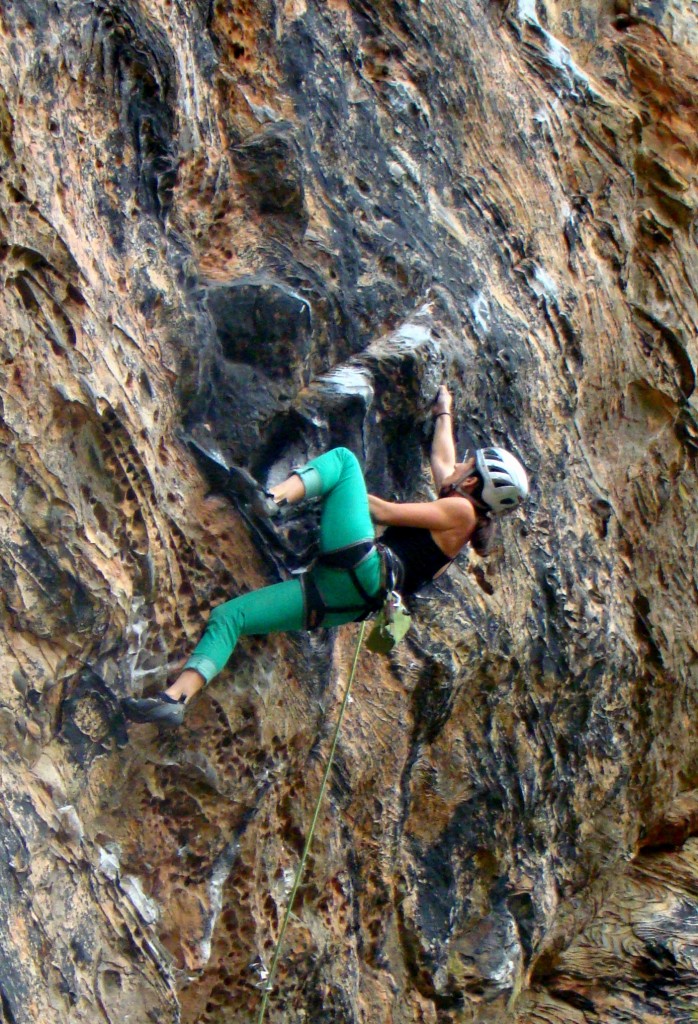 Starting the crux of Wild Yet Tasty 5.12a

Although I wasn’t initially psyched on an afternoon at Eastern Sky Bridge, Commencement (5.11c) ended up being one of my trip highlights.  The first half of the route consisted of huge moves between perfectly-angled pockets on gently overhanging rock (NRG climbers: think Disturbance.)  After a great rest, the angle lessened a bit for a reachy slab crux, then the pump clock was on until the chains.  I was proud of myself for really going for it in the dynamic lower section…then almost unraveled going up/down, up/down on the ledge trying to figure out how to reach the next holds on the slab crux.  The finish was desperate and I was super stoked to send!

We chased shade at Muir Valley on Saturday.  Every time I go there I’m amazed at that place – Rick and Liz Weber are awesome folks, and the climbing community is so lucky to have them around!  This was the first we’d been on the new North Main Trail – Big C loved all the stairs, and hiking out in the woods was so much better than baking in the sun on the end-of-day trudge up that gravel road!

After a quick warm-up at The Boneyard (Armed Insurrection 5.10d), we all got shut down on Iniquity (5.12b) before moving over to the Bibliothek for the afternoon.  The routes there are typical RRG – steep pulling on juggy pockets and finger buckets.  I can tell my power endurance work has been paying off, because I was able to flash all 3 routes – The Unbearable Lightness of Being (5.11c), A Portrait of the Artist as a Young Man (5.11b), and 100 Years of Solitude (5.11a).  Ordinarily by Day 3 I probably would have been good to send maybe the first one, then limp my way up the others bolt to bolt, but this time around I seemed to have a lot more reserve in the tank than normal on that sort of terrain. 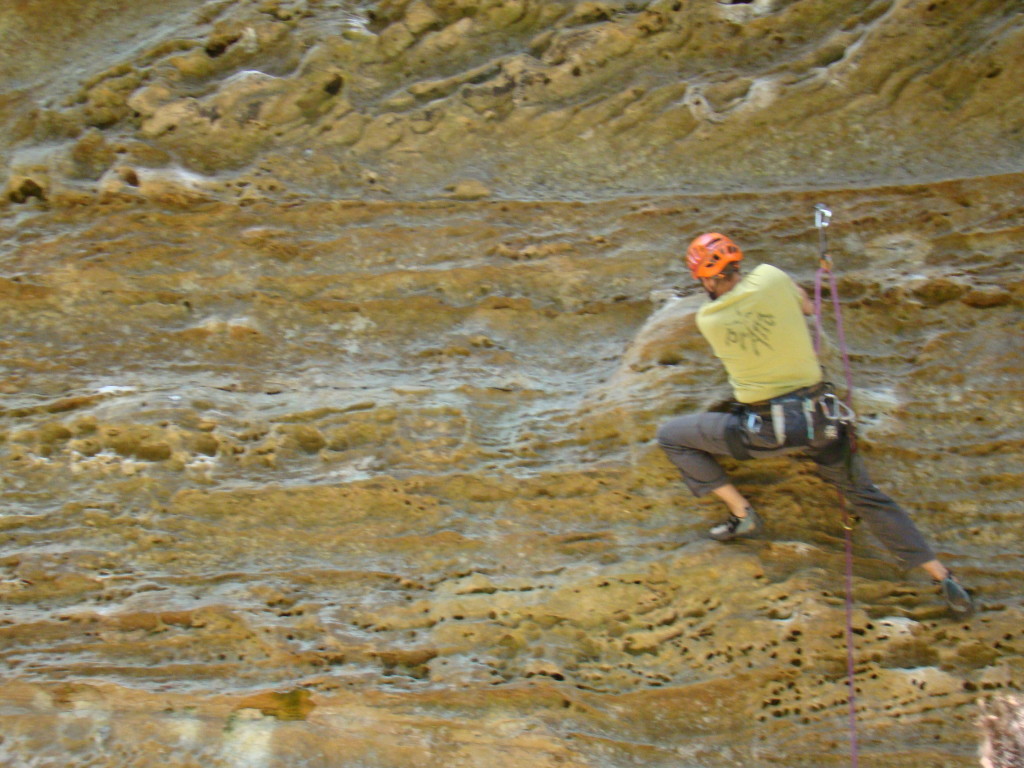 By the last day, our spirits were willing but our bodies were pretty weak…and it was raining fairly hard with no sign of stopping any time that day.  But we at least wanted to get a few more pitches in before hitting the road, so back to PMRP we went, this time to the Chocolate Factory.  After botching the approach (do NOT take the 2nd trail on the left…it’s more like the 5th or 6th left!), we finally arrived under the moderate classics, Oompa (5.10a), and Loompa (5.10c.)  To be honest, both felt about the same difficulty, which felt about 5.PUMP!  In fact, we all thought that the easiest line on the wall was The Glass Elevator (5.10d), a taller, more technical line that was much closer to vertical.  (But that could have been the Day 4 forearms shouting!) 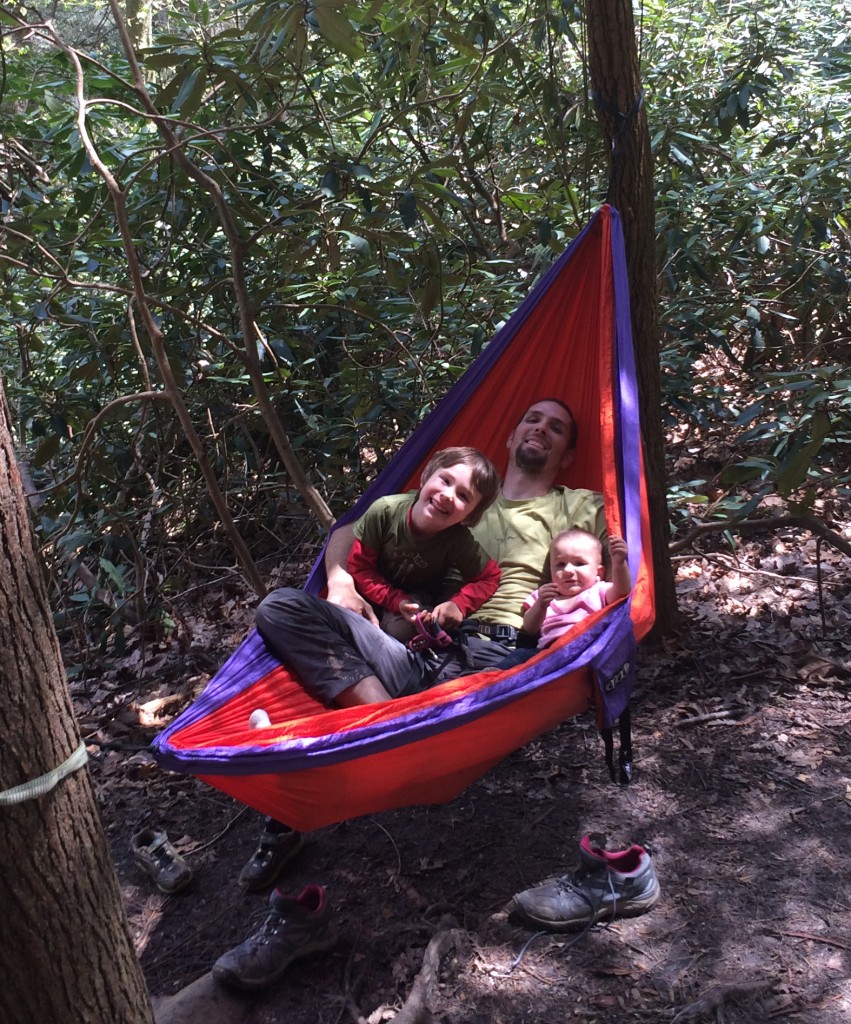 I’m not gonna lie, by this point in the trip, even juggy 5.10 felt hard, so I was pretty stoked to keep my flash streak alive.  I may not have sent any 12’s, but I was pleased at how consistently I was able to perform on RRG terrain – onsighting or flashing everything that was 5.11 and under.  Every other time we’ve been to the Red, we seek out some slabs (which at the Red means “vertical”) for at least one day of the trip, but this time around we kept it steep the whole time, and I was pleased at how long my forearms lasted.

I’ve got hopefully one more week left in the performance phase before taking a couple of weeks off, so here’s hoping the weather will hold out once more!