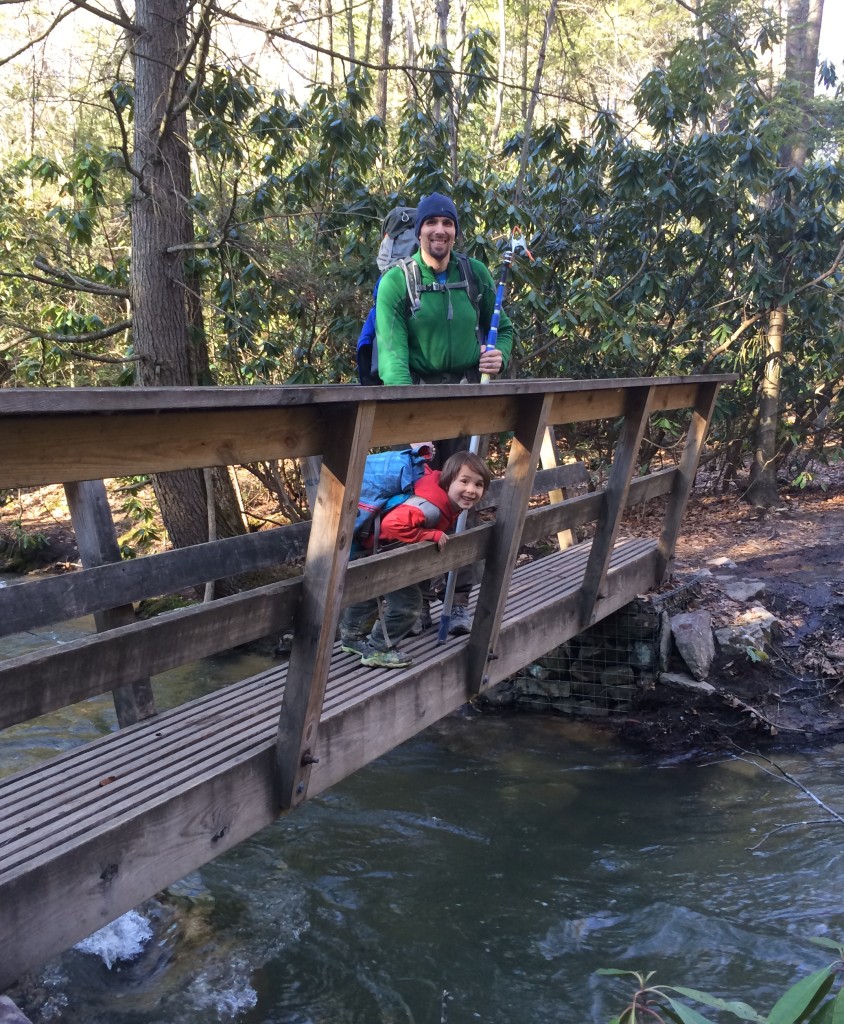 High water on Fern Creek thanks to the monsoons from the day before!

This past weekend marked the first trip of my “Performance Phase” in my first training cycle using the Rock Climber’s Training Manual.  There were a few ups and downs, but overall I am very pleased with how I climbed, and am optimistic about how the next few weeks will go.  I’ll start with the downs, so I can end on a good note!

On the routes I’d previously been on (and thus already worked out the moves for), I got shutdown.  I failed miserably on Techman (5.12c), which had been my primary goal for the weekend.  The crux went okay, but I got stuck on the next big move.  I was confused about the beta I’d written down before, and got tunnel vision trying to work out the moves again.  (Once I got home, I remembered we’d taken a beta video last fall…upon watching it I realized that what I SHOULD have done in that section was far more straightforward than what I’d been trying, but required a lot more try hard than what I was mustering.)

The next down involved Likme (5.12a), another route I’d been previously close to sending a while back.  The bolting is strange, which makes for a scary traverse on 5.11 terrain with a gnarly swinging fall potential.  An attentive belay would keep you off the ground, but a belayer collision would be pretty likely.  Even though I’d gotten through that section clean on lead before, I could not commit to it this time around, and decided to rehearse it on toprope first.  I then proceeded to fall in what would have been the worst possible spot, then fired the crux clean.  I suppose I could have continued to rehearse the no-fall moves a little more til I felt comfortable, but I just didn’t feel good about it. 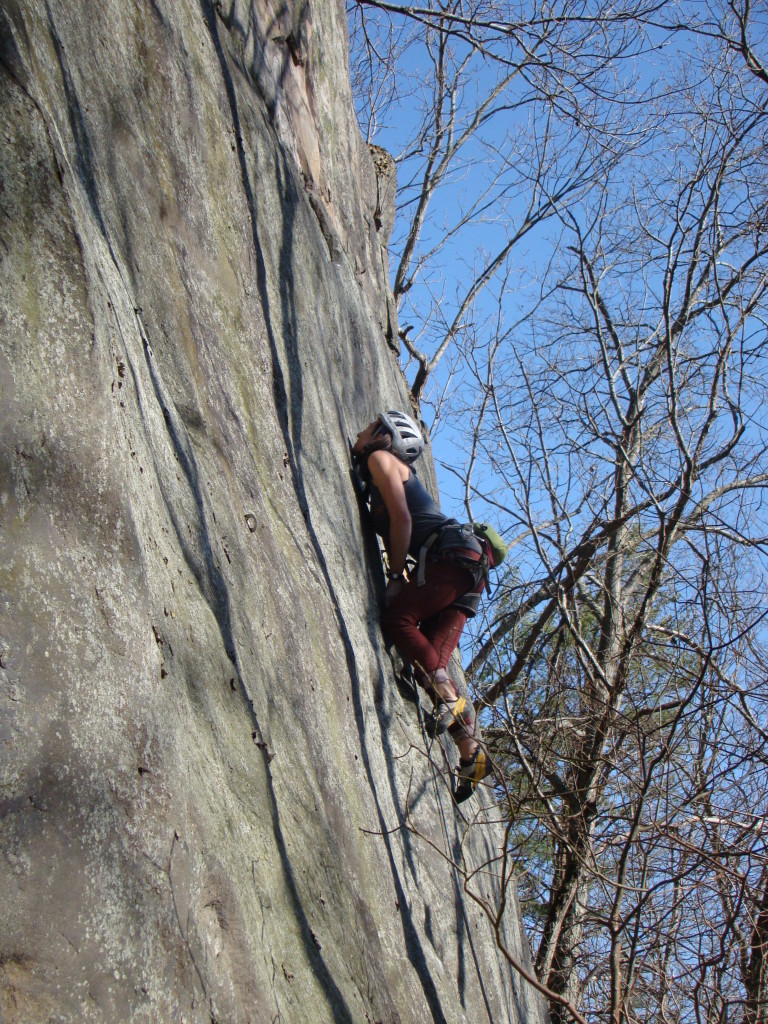 However, the weekend was literally overflowing with silver linings, from both myself and the Crag-Daddy (who literally had the best-performing climbing weekend of his entire LIFE!)  In fact I only mentioned the downs because I feel like the balance of failure and success is important. But at the end of the weekend, I walked away with several firsts – first time ever bagging two 5.12’s in a single weekend, and first time I’ve ever sent 12b second go!  Here are my highlights…

Le Futuriste (5.12b) – At first I thought it was the adrenaline talking, but here I am a few days later, and I still think this might be my absolute favorite line at Endless Wall, maybe even the entire New River Gorge.  A little bit of everything – a funky boulder problem start to get the blood flowing, several long stand-up cruxes on the slab (one of which is literally a slab dyno!), and a gorgeous arete that requires the perfect balance of precision and power.  I went in with no expectations, and surprised myself when I ALMOST flashed it, only falling at the very last hard move at the top of the arete.  With climbing that fun, having to hop on it again for a redpoint go didn’t bother me one bit! 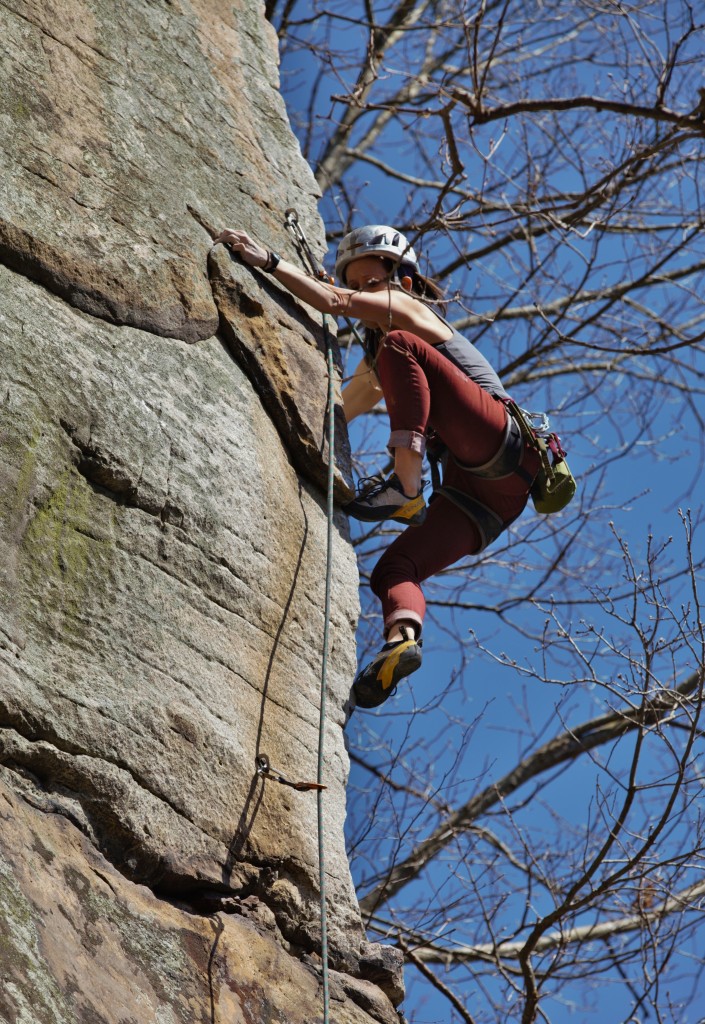 Trusting the rubber on my Tenaya Tarifa for the crux of La Futuriste 5.12b Photo: Javier Licon

Fired for Sandbaggin’ (5.12a) – I’d actually never heard of this Bubba City line before having gotten on it.  If you can crimp hard and keep your head together, then this route is for you!  The crux sequence is short-lived and under the first bolt – a long move off of two tiny crimps, one of which is absolutely terrible.  The rest of the route is significantly easier, although there are definitely a couple of sequences up higher that will keep you awake (mid 5.11.)  Our crew had a giant send train going on this one – 7 sends, all of which were either flashes or 2nd go’s (second go for me.) 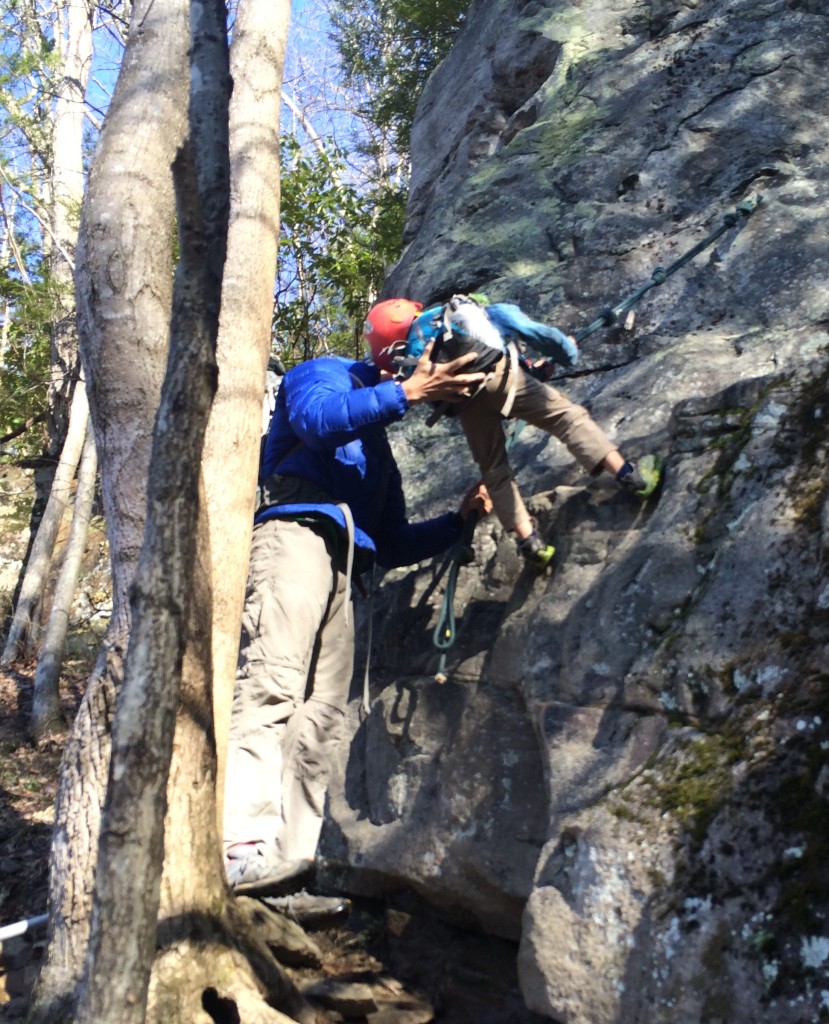 Michelin Man (5.12b) – Although I can’t claim the send on this one yet, I’m pretty psyched about a second go one-hang at the very end of the weekend!  This route is AMAZING, definitely the best rock I’ve touched at Bubba City.  The majority of the route features long moves between good holds on a gently overhanging face, to a hand jam rest, then a cool move on a very random 2-finger pocket to an almost hands-free rest.  Then you can choose whether to go left to keep the route at 11d, or head right for a reachy 12b slab crux.  Our crew opted for the latter.  What makes me most excited about this is that the only other time I have been on this route was a couple of years ago, and I got completely shut down at the first bolt (a big toss that is very tenuous to set up for if you’re short.)  My first go I pretty much went bolt to bolt, as it took some thinking to work out my beta on some of the longer moves.  I was very pleased to flash the 12b crux, but figured my guns were too smoked to be able to link the pumpy bottom section together.  I presumed my 2nd attempt would be more of a beta refining journey than an actual sending attempt.  However I was super psyched to make it just 3 moves from the hand jam rest before falling!  I’m optimistic the route will go this coming weekend for me (especially after the power endurance route I put myself through last night!) 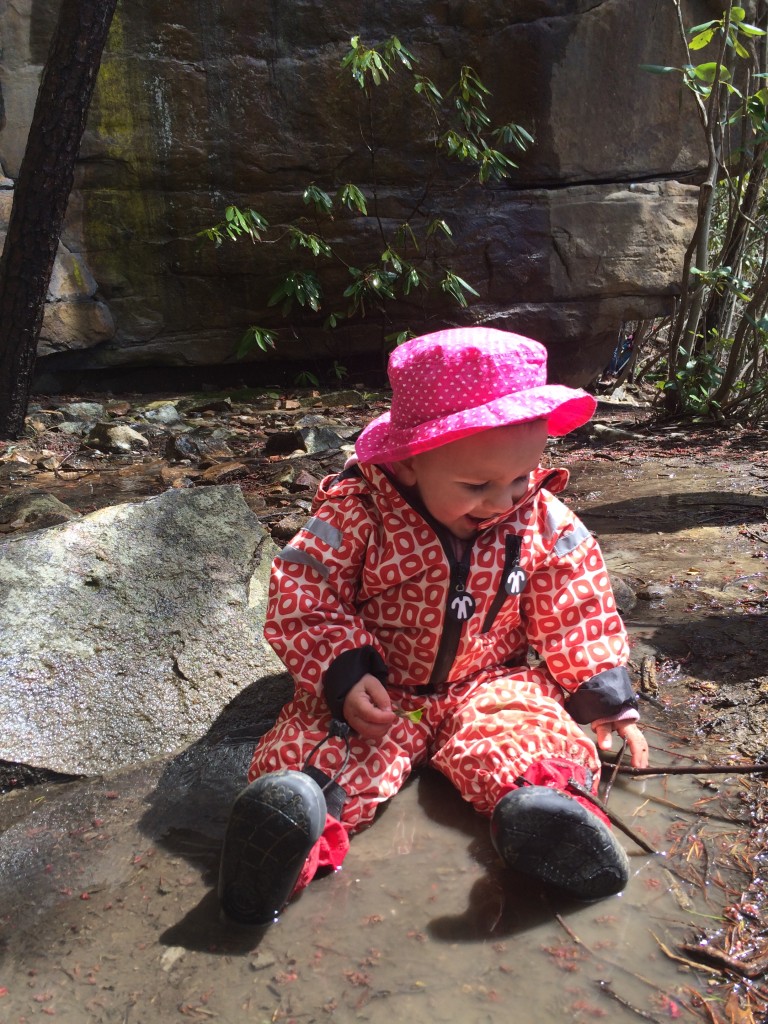 My rock princess sitting in a mud puddle.

Upon reflection, the most interesting observation I noted about my performance was that I climbed very well on the routes that were completely new to me, and not so well on the routes I’d had previous “baggage” with.  I’ve thought about it some, and I think I figured out why.  While I came into the weekend well-prepared physically, I was lacking in the mental prep.  I came in fired up with a ton of psych…but not enough focus.  Had I been more open-minded about Techman, I would have tried harder with the beta that I was so sure was wrong (and I would have remembered to watch the beta video the night before we left, duh!)  Had I really thought through my previous feelings about Likme, I probably would have realized it wasn’t worth my time, and would have had more energy for climbing (and perhaps sending) Michelin Man.

But with two 5.12 ticks and another in the hopper, I’m very excited to see the rest of this spring sending season unfold!  We’re headed back to the New this weekend, and the weather looks stellar!  Where are YOU headed? 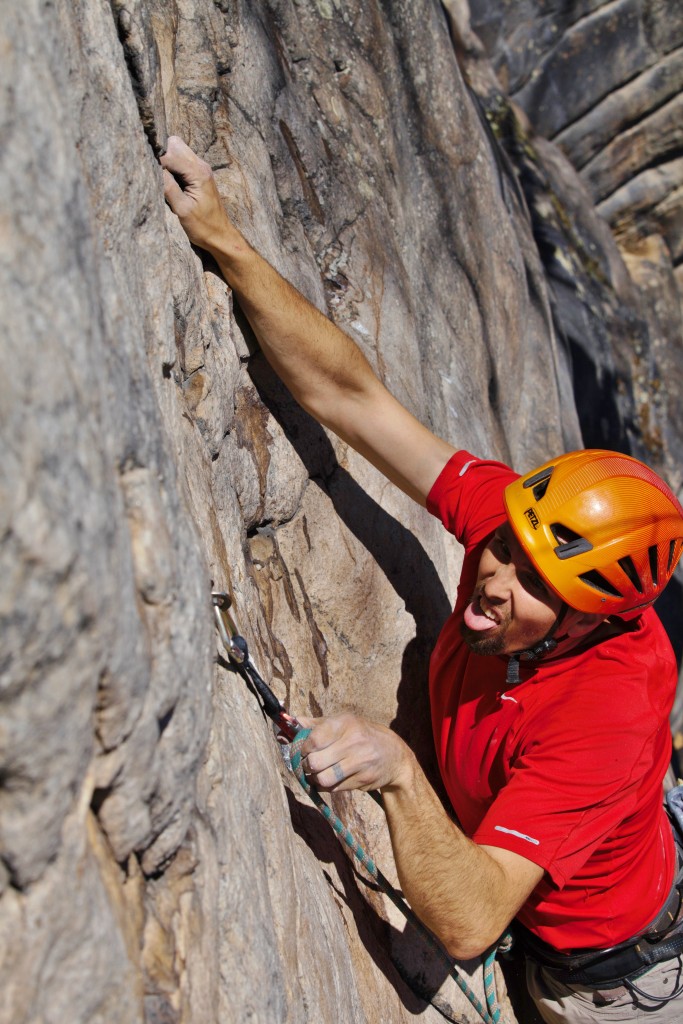 Crag Daddy getting serious on Michelin Man 5.12b)…sun’s out, tongue’s out, I guess! Photo: Javier Licon