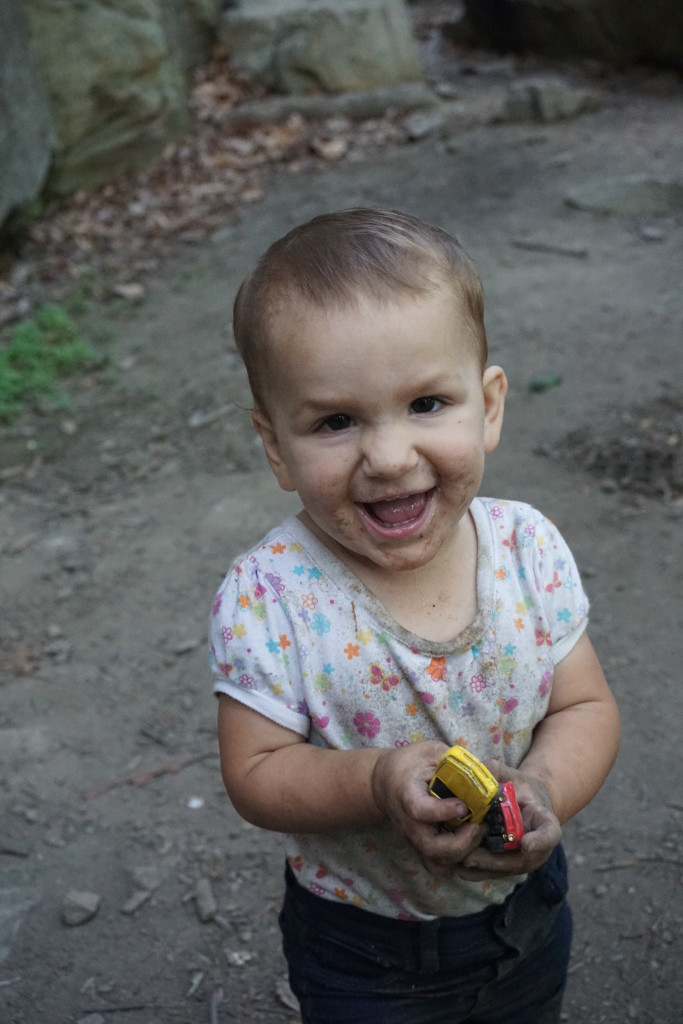 Happy child in the dirt.

Our good luck with good climbing conditions has fortunately continued into late spring (which probably means we’ll be smothered by a hot blanket of humidity any day now.)  And while 80’s may not be ideal sending temps, the weather felt darn near perfect for June in the Southeast…so off to the New we went!

We decided to climb in the shade at Kaymoor on Day 1.  Steve was psyched to work Lost Souls (5.12a), and I figured it was probably about time for me to give that one another try.  I’d been on it several times before Baby Zu (most notably of which was during the NRG Craggin’ Classic back in 2012 for some Trango photos), and it never went particularly well.

For those not familiar with this classic, it’s one of those that gets the grade based on linking the sum of its parts rather than individual moves.  There are 3 cruxes, all of which are giant jug to jug tosses.  Very straightforward, and the very definition of power endurance.  It’s a very common “first 5.12” since none of the individual moves are that “hard” compared to other similarly graded routes in the area (ie, anything Endless Wall.)  So if you are a tall climber that loves gymnastic movement, get out there ASAP for an easy send!  If you are vertically-challenged and/or lean towards more technical climbs…you should still get on it because it’s awesome!  (But bring your “try hard” pants and be ready to launch!) 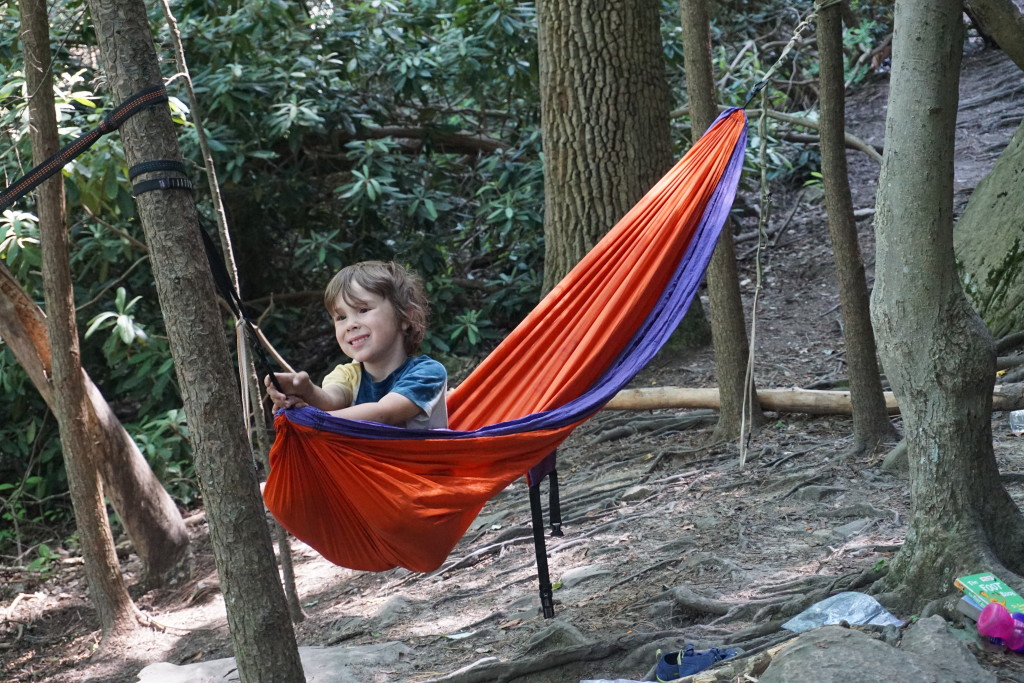 Happy child in the hammock.

The Crag-Daddy (Steve) went up first and managed a one-hang even while hanging draws, so things were looking pretty good for him.  My first run, however, was dismal.  I started hanging before the 1st bolt, and struggled on just about every move.  My performance was so ridiculously bad that I almost didn’t get on it again.  However, of late I’ve been surprising myself on the 2nd go, so I thought I’d give it at least one more burn.

Steve made it through all 3 cruxes on his second go!  And also his 3rd and 4th go…unfortunately the pump factor kept spitting him off literally one move away from the no hands rest at the end of the traverse!  My 2nd go was decidedly better than the 1st – I did the 1st crux clean, and the 2nd and 3rd cruxes only took a couple of tries.  My 3rd go was even more progress – just one fall each at the 2nd and 3rd cruxes.

I was definitely in better spirits by that point, but still unsure whether I had a send in me or not.  I had crazy shortie beta for the 2nd crux, and I had never been able to link it with ANY of the previous moves, let alone coming in hot on a redpoint run.  Steve convinced me to give it one more try,, and I shocked myself with an almost send!  I made it clean all the way through to the last toss.  I had the distance…but my arms were so pumped that I couldn’t open my hand in time to latch the jug, and I ended up bashing my knuckles into the wall (FYI we refer to that phenomenon as “T-Rexing…”). 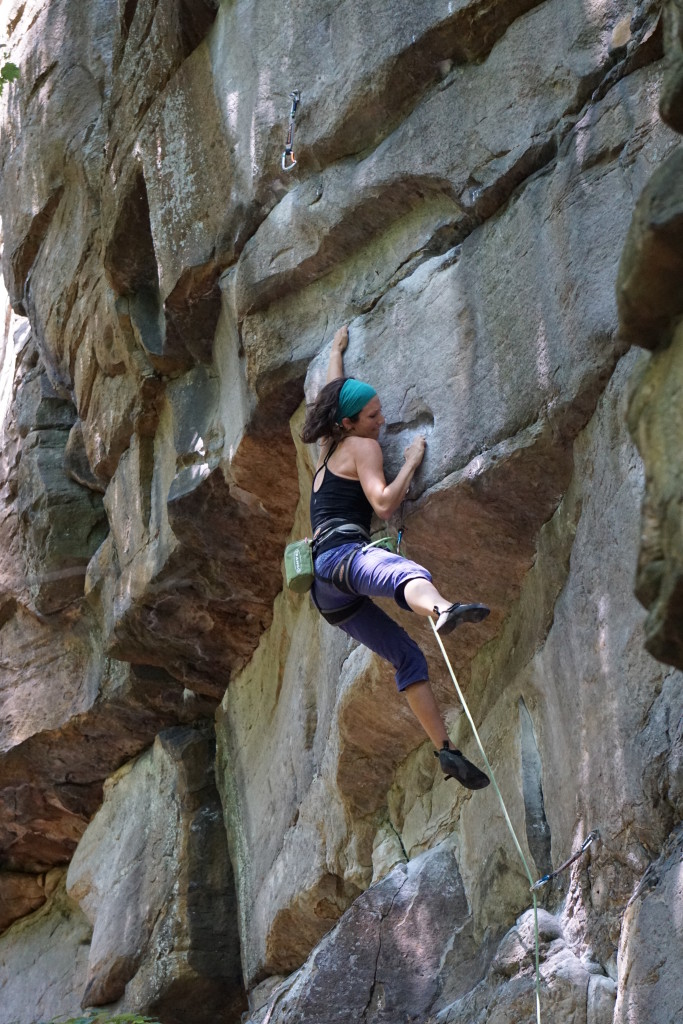 I was disappointed I didn’t send, but thrilled to know that my beta was solid.  It was the first time I actually believed that the route could go at the current fitness level I was at, rather than always thinking “Come back when you’re stronger.”  But lucky for us the whole crew had unfinished business at Kaymoor, so it was a no-brainer to come back the next day.

I did everything I could think of that night to maximize recovery – good food, lots of water, Arm-aid, finger acupressure, yoga, and as much sleep as I could muster in a tent with a 15 month old that hates sleeping. 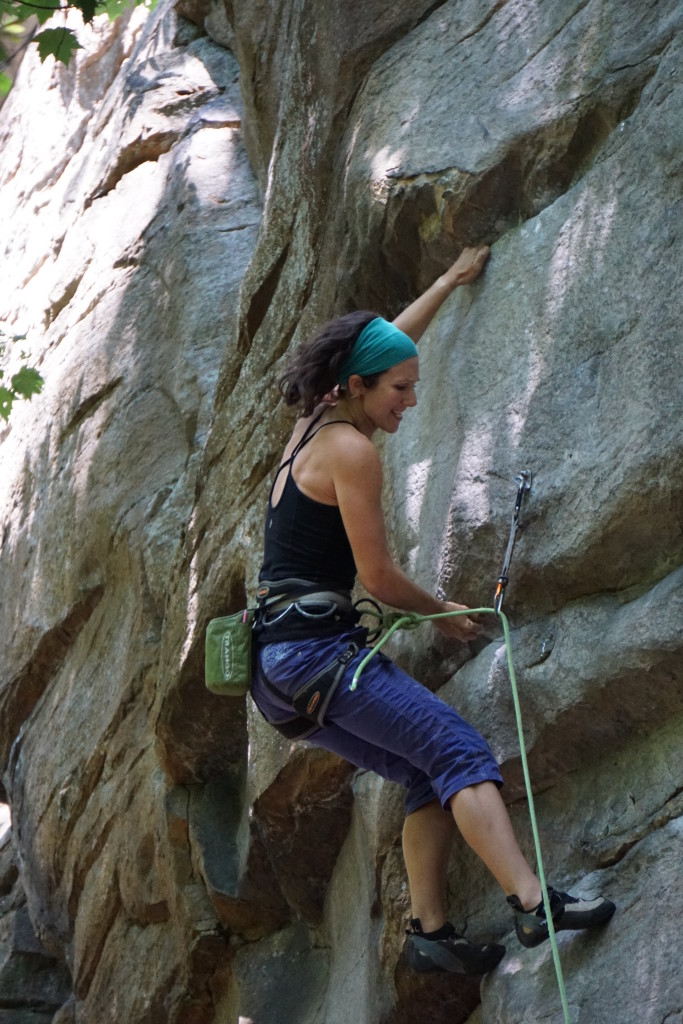 Sunday dawned a little bit warmer, but the rock still felt surprisingly crisp.  Steve was up first and sailed through the first three cruxes yet again…but YET AGAIN fell inches before the rest!  I was feeling good, but not at all like a send was a sure thing, as any of the cruxes could easily spit me off if I didn’t execute them perfectly. But thankfully my first go of the day was my last – my beta worked, and the send was mine!  (And Steve sent next go as well, which made for a happy ride home for the whole family.) 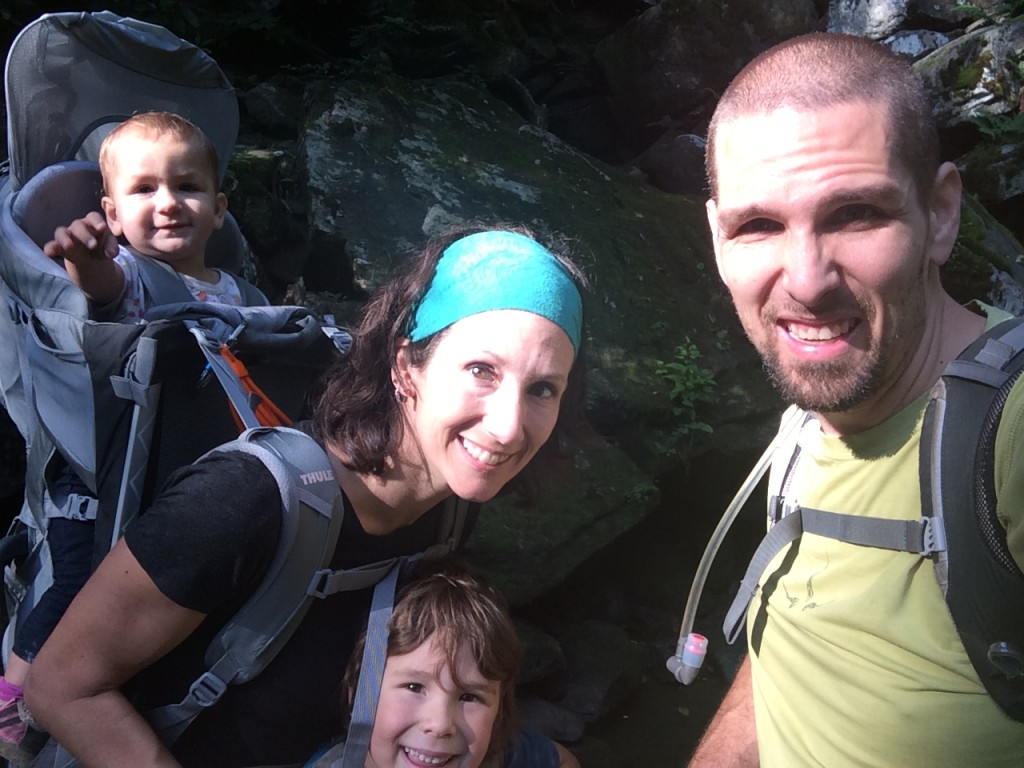 After Lost Souls, there was still plenty of time left to climb, so I rounded out my day with Hardcore Female Thrash (5.11c) and Boing (5.10d).  Hardcore Female Thrash is a one move wonder that moves up a very cool dihedral feature (took 2 tries for the send), and Boing is a high-steppin’ slab climb.  Both are fantastic lines that are definitely worth hopping on if you find yourself in the area.