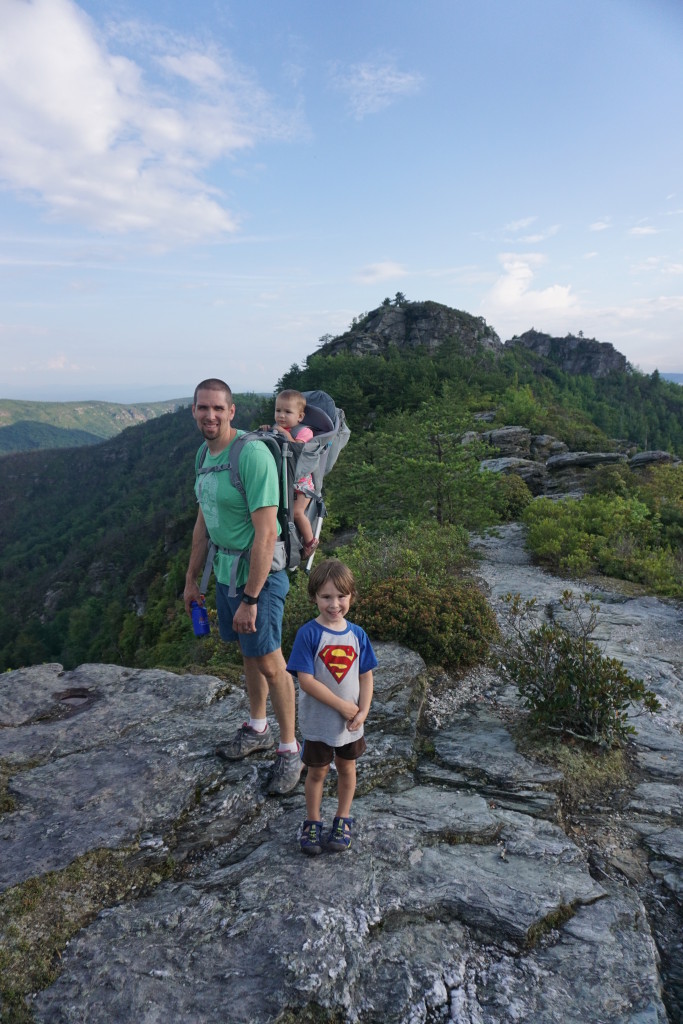 This past weekend our family did an overnight in the Linville Gorge.  If you’ve never been to the Linville Gorge, it’s pretty spectacular!  If you like being outside at all, you will fall in love with this place, as it is top-notch at pretty much whatever outdoor endeavor you like.  On this particular occasion, we had planned a 24 hour quickie of hiking, climbing, camping, and lazing around in the hammock.  Thankfully it’s only a couple of hours from our house, and we arrived on Friday evening a little bit after 6 – just enough time for a short hike/picnic along the Mountains-to-Sea Trail, per Big C’s request.

We camped at Hawksbill, and woke up to a gorgeous morning.  Our climbing partners were day-tripping and wouldn’t be there until 10 am, so after a leisurely breakfast, we got the jump on the approach hike.  While only 1.1 miles, it’s rather grueling, especially for 5 year old legs.  It’s relentlessly uphill for a mile…then 3rd class scrambling down a gully for several hundred feet.  At the climber’s turnoff, Big C and I dropped our packs and scampered up the additional 5 minutes to the summit.  It was a clear day, and we were rewarded with amazing views!  Big C wanted to know the name of every mountain, ridge, and cliffline as far as the eye could see, then after a bit of rock hopping fun, we headed back down and continued our approach.

The only real agenda on the day was for Crag-Daddy Steve to send Hard Rock Cafe (5.12c).  It had been one of my main objectives during the spring season, and he’d gotten sucked into it last time we were out there.  Since I’d already done that one, and anything “next” on the list there would involve powerful cranking off small razor blades, I took the opportunity to save my skin and exercise my will power instead.  (I’m currently smack dab in the middle of a hangboarding phase in prep for our Ten Sleep trip coming up in August, which means I’m supposed to be taking it easy on the fingers.)  I got in on the warm-up (If You Bolt It, They Will Come 5.10a), made a half-assed attempt at Manifest Destiny (5.12c), and then took my harness off and hammocked with the kiddos.  Unfortunately Steve didn’t send and we’ll have to come back another time…which is fine by me, because there is a stack of routes down there I’d love to get on when I’m psyched to try hard! 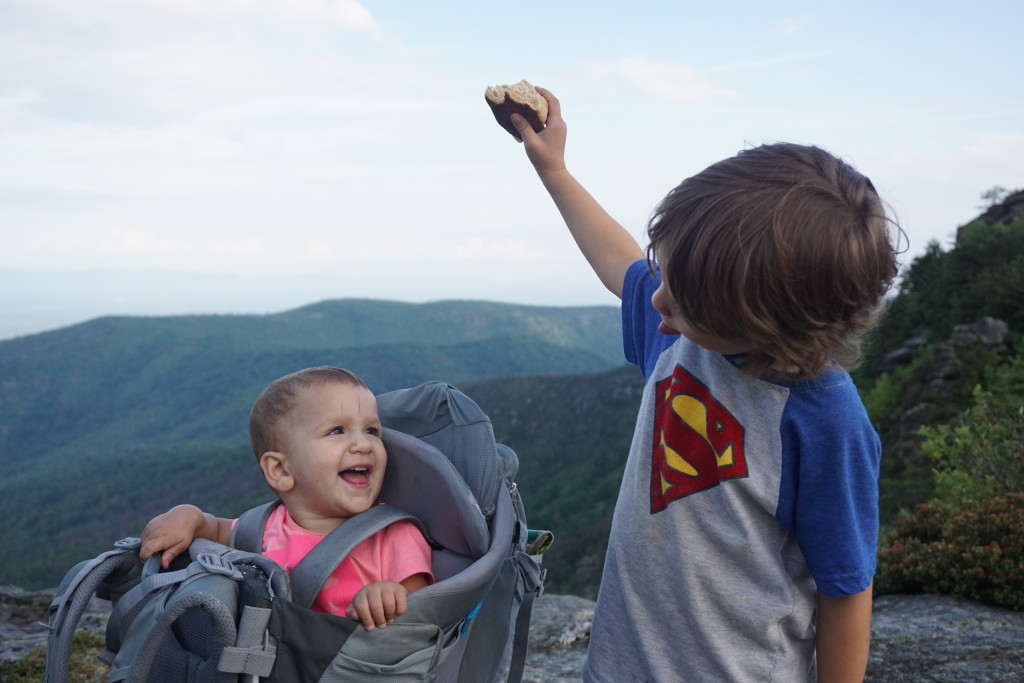 Had our day ended there I would have been satisfied with a great day outside with friends and family.   But my personal highlight came unexpectedly at the end of the day.  My friend Sam was itching to get in another couple of pitches, and had his eye on the traditional classic, Lost in Space (5.10b.)  His partner wasn’t up for it, so he dangled the carrot in front of me – leading, following, whatever I wanted, as he had done it already and just wanted to get on it again.  The Crag-Daddy pointed out that if he hiked out with both kiddos at a 5 year old pace, and Sam and I got started right away, we could probably finish, walk off, and make it back to the parking lot before the kids started going crazy.  After all, Baby Zu had taken a great afternoon nap, and the area around the parking lot was a great place for curious hands and feet to pass the time away. 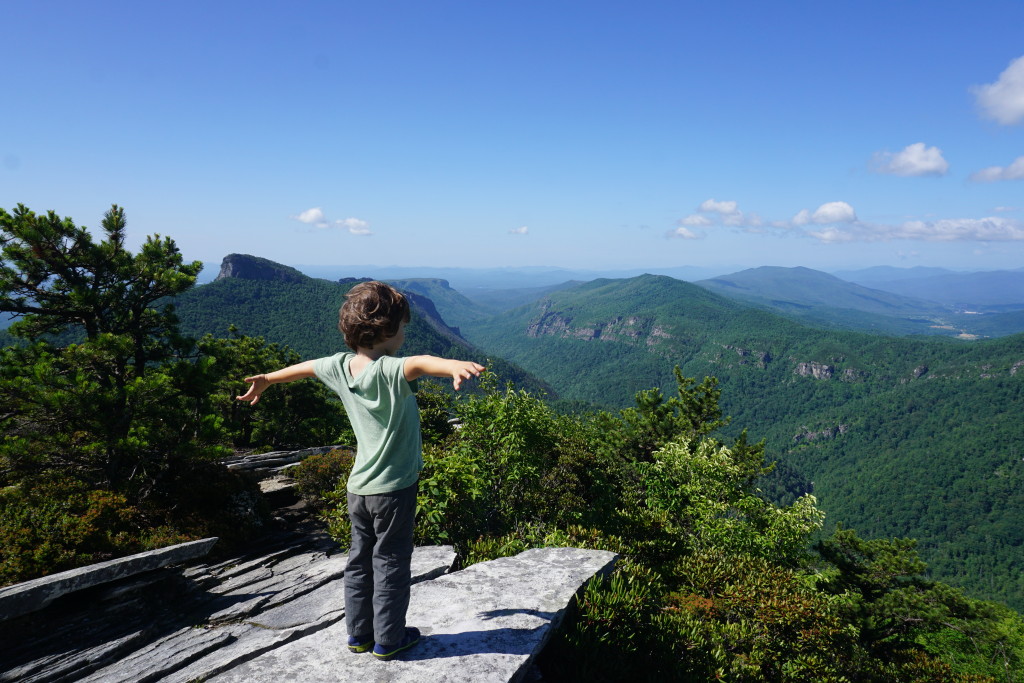 Breathtaking views at the top of Hawksbill Mountain!

And with that we were off!  As I headed up the gully to the base of the route, I felt giddy with excitement…and also a little nervous.  Pre-kiddos, Steve and I did a lot of multi-pitch climbing.  And while I’ve since been dabbling in enough trad climbing to remain competent in my gear placing skills, it’s been years since I’ve brought a second up (our Vegas getaway in 2012.)  And not to mention I can’t even remember the last time I built a gear anchor. 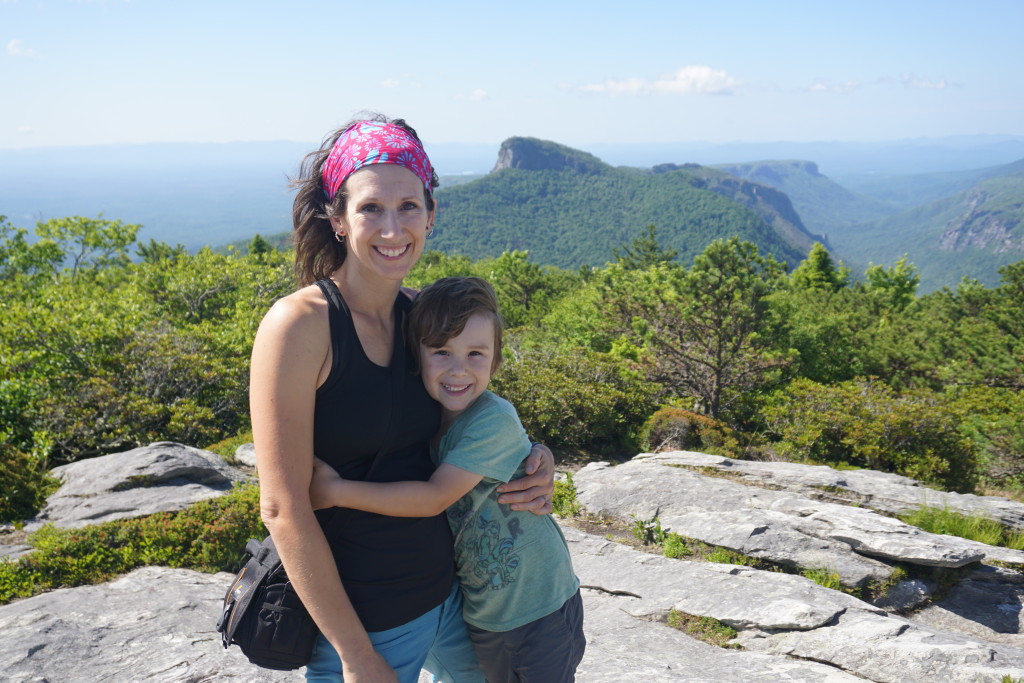 One of my favorite hiking partners!

I didn’t know a thing about Lost in Space (other than the obligatory photo opp at the start of pitch 2 that everyone always posts on facebook.)  But I sure as heck knew I wasn’t going to let the chance to flash such a classic money pitch slip out of my fingers.  Sam was kind enough to let me use his gear, and gave me some beta on the post-crux piece as well as what to save for the anchor (the latter probably being more for his own benefit than mine 😉 ).

The first pitch was decent, but definitely just the way to get up to the goodness above.  A slab and a lieback corner later and we were both at the belay, staring down the roof of pitch 2.  I was pretty darn intimidated (“It’s 5.10. It’s 5.10.  It’s 5.10”, I kept telling myself.)  I crawled out under the roof, placed a piece, and got my hands on the jug at the lip of the roof.  It’s a looooong move to the next horizontal.  I hemmed and hawed up and down for at least 10 minutes, unable to commit.  I eventually realized that I could place a piece at the lip, making the fall about a zillion times better, and committed straightaway.  (For the record, the move felt pretty darn hard for 5.10…maybe it would feel easier 10 feet off the deck instead of 100…)  The rest of the pitch was a casual romp up a corner system to the “almost” top.  I kept looking back, savoring the exposure, and at one point realized I had a ridiculous perma-grin on my face.  It was over all too soon!  I brought Sam up, we scrambled around to the trail, grabbed our packs, and sprinted back to the cars. 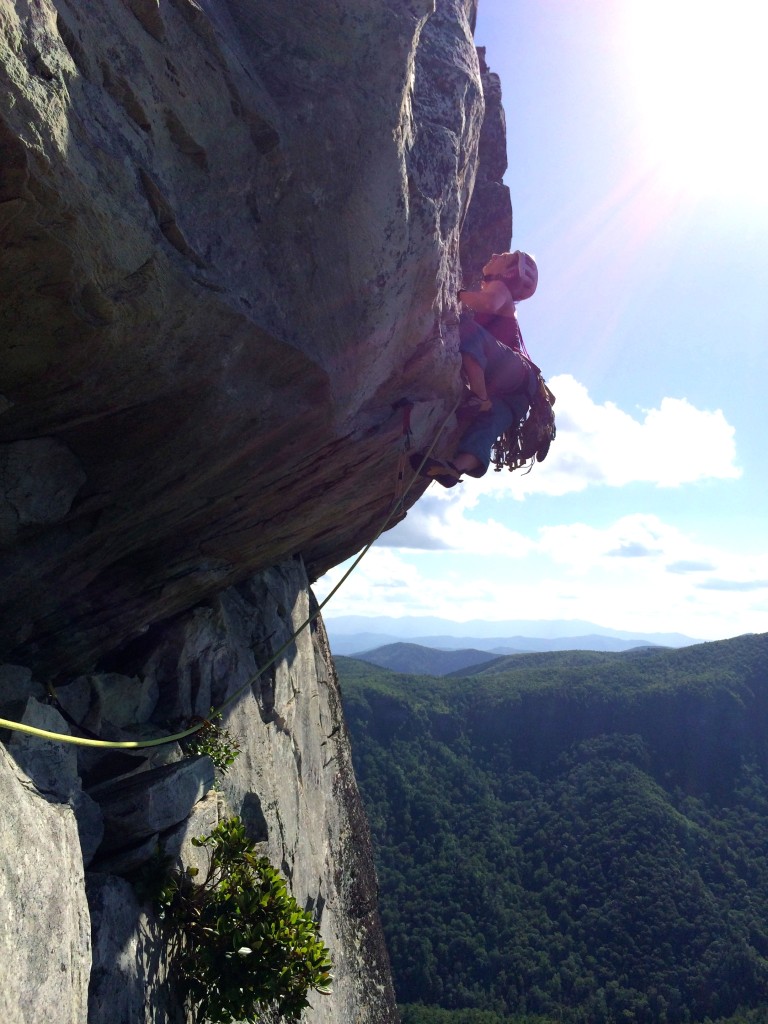 The infamous photo opp on the crux pitch!

A random 2 pitch climb might not seem like that big of a deal to folks without young children…but for me it was such a special treat!  I realized it had been so long that I’d almost forgotten what that sort of adventure tasted like.  It will still be a pretty long while before the Crag-Daddy and I are able to get high off the ground together, but that romp up Lost in Space was a great reminder that the rock will still be there when we are ready.  (And the adventures will be twice as amazing…and maybe even triple or quadruple, if the kids decide they want in on it!!!)

I’m grateful for that impromptu opportunity, as it was refreshing for my soul.  But for now, it’s back to more grounded family adventures…which are just as exhilarating, though in a different kind of way!

2 Responses to “Gettin’ High Off the Ground in Linville Gorge”