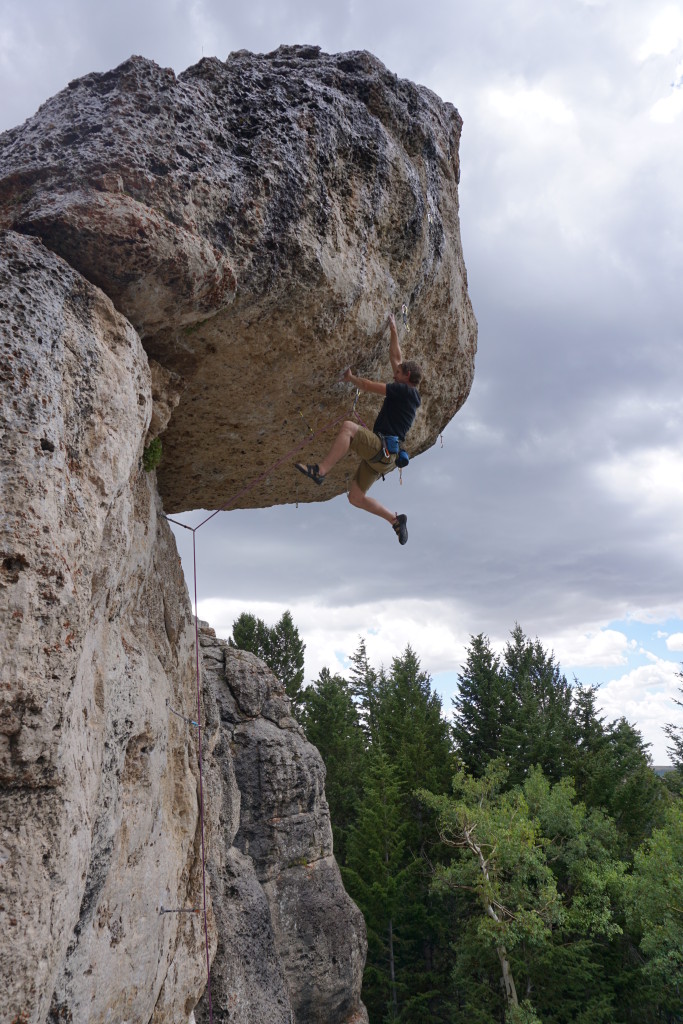 Caleb checking out the moves on Poker Face Alice.

If you’ve been regularly following this blog, you may have noticed that it’s been pretty quiet of late.  That’s because our family spent 10 days frolicking around in the wilds of Wyoming.  And then recovering from said frolicking.  And now finally getting around to writing about said frolicking.  Since summing up the whole trip in one blog post would probably make my head explode, I’ve decided to break it down by area, starting with our first stop in Lander.

With so much climbing looming before us, we’d intended this day to be somewhat of a “warm-up”…but it ended up being one of the longest, most action-packed days of the entire trip!  We climbed at the OK Corral area, which had a nice short approach, and a great selection of routes from 5.easy to 5.hard to choose from.  Since our time here was short, we were pretty picky about sticking to the heavily-starred routes in the guidebook.

Red Ryder 10a – Good intro to Wild Iris limestone.  Cool holds and cool moves.
Winchester Pump 11b – We were all feeling the pump by the top of this one, but all sent 1st go.
Rooster Cogburn 12a – This one looked pretty doable, so I intentionally didn’t look when everyone else was climbing, in order to preserve my onsight chance.  (Non-climber note: An “onsight” means to send a route with no falls or rests on the rope on your first try, without any prior knowledge about the route.)  There were a couple of cruxes, but with good rests in between, linking the moves wasn’t all that hard.  Onsighting a 5.12 had been one of my goals for the trip, so it felt really good to get that out of the way on Day 1! 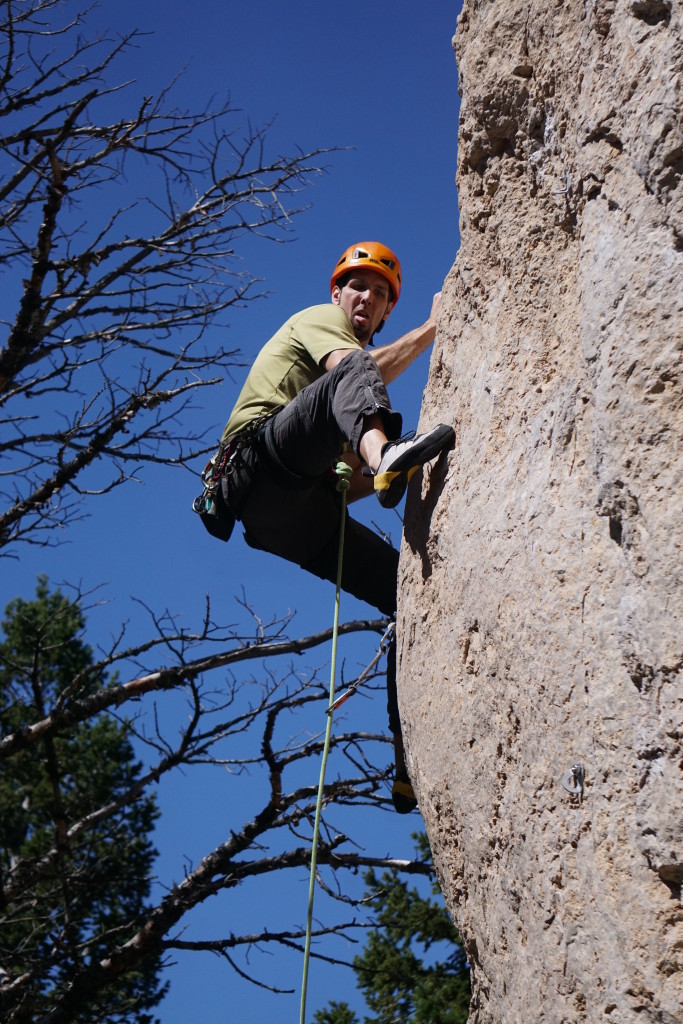 Steve on Rooster Cogburn 12a

Tribal Wars 5.11b – After proclaiming all the previous routes as soft for the grade (I think our actual words were, “If that 12 were at the New, it would only get 11c!”), we had to eat our words on this one!  Probably the best route we did at the Iris, Tribal Wars featured a tricky technical crux on the face before some steep, pumpy climbing to the chains.  The technical crux gave me no trouble, but the overhang had me breathing pretty hard – the moves were longer than I was expecting, on holds that weren’t quite as good as I’d wanted (although some locals told me I missed a few jugs hidden in the sea of pockets.)  By the time I got to the chains I was pretty desperate, but managed to hold out for the onsight. 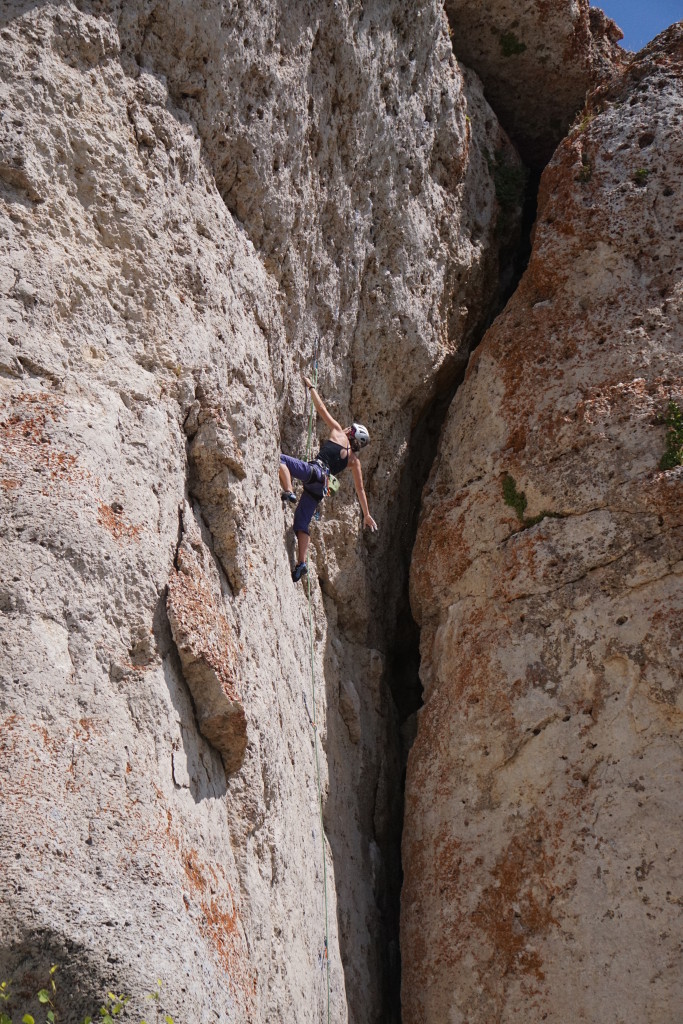 Me shaking out before the overhang on Tribal Wars 11b

Not wanting to blow our forearms out on the first day, we decided to call it quits (especially since by now the whole crag was in full sun and it was pretty hot.)  However when we got back into town, it was a little too early for dinner.  Being amped for exploring our new environs, we opted to head to Sinks Canyon to hike to the infamous Popo Agie Falls water slide.

In hindsight, this endeavor was far too involved to be attempting with two hungry kiddos that were still on Eastern time…but all’s well that ends well, and it was definitely worth the late bedtimes!  Even if you aren’t interested in taking the plunge, the hike is still a must-do in the area.  The distance to the best viewpoint of the falls is 1.5 miles (with gorgeous scenery the whole way), with another half mile to the slide.  The slide itself is about 15 feet long to a drop of about 10 feet into a deep pool that has redefined my understanding of the word “cold.”  A far cry from the bathwater temps we southerners are accustomed to in August.

Crag-Daddy and I had gone back and forth about whether or not to bring Big C’s PFD (for the sole purpose of this water slide)  It was bulky to pack, and we even sure he’d want to do the slide.  He can swim, but not good enough to trust him in a situation like that with so many unknowns.  But boy am I glad we brought it, because he didn’t hesitate one bit!  When he bobbed back up his eyes looked pretty terrified, but by the time we got to shore, he was grinning from ear to ear, and that’s all we heard about for the next several days!

We did the trek to the Main Wall on our second day, which although beautiful, we all felt was grossly underestimated in the guidebook (30 minutes?!?…although it could have been the elevation talking.)  Out of the whole trip, this is the one day that could have had better planning.  We did a lot of moving around, with not a lot of climbing to show for it.  We warmed up on Take Your Hat Off (5.10b), which was an excellent, engaging route.  Then we hopped on Arizona Cowgirl (5.11c), which felt a lot easier than either of the 11’s we’d done the previous day.  Our next stop was Hot Tamale Baby (5.12a),  an interesting route with a bouldery crux that Crag-Daddy put up just before a random hailstorm (?!?) rolled through.  With the weather being a little sketch, and not knowing if the upper sections of the route would be wet, Caleb and I both decided to toprope this route.  Afterwards, we kept moving up the cliff, but didn’t see anything we liked, and ended up hiking back to the parking lot.  In hindsight, we all wished we would have stayed and tried to send Hot Tamale.  Or stopped further down the trail earlier that morning to try Wind and Rattlesnakes (5.12a).  There were just SO many routes, and backtracking with the kiddos would have been a pain, especially since we were committed to end at a reasonable hour this time. 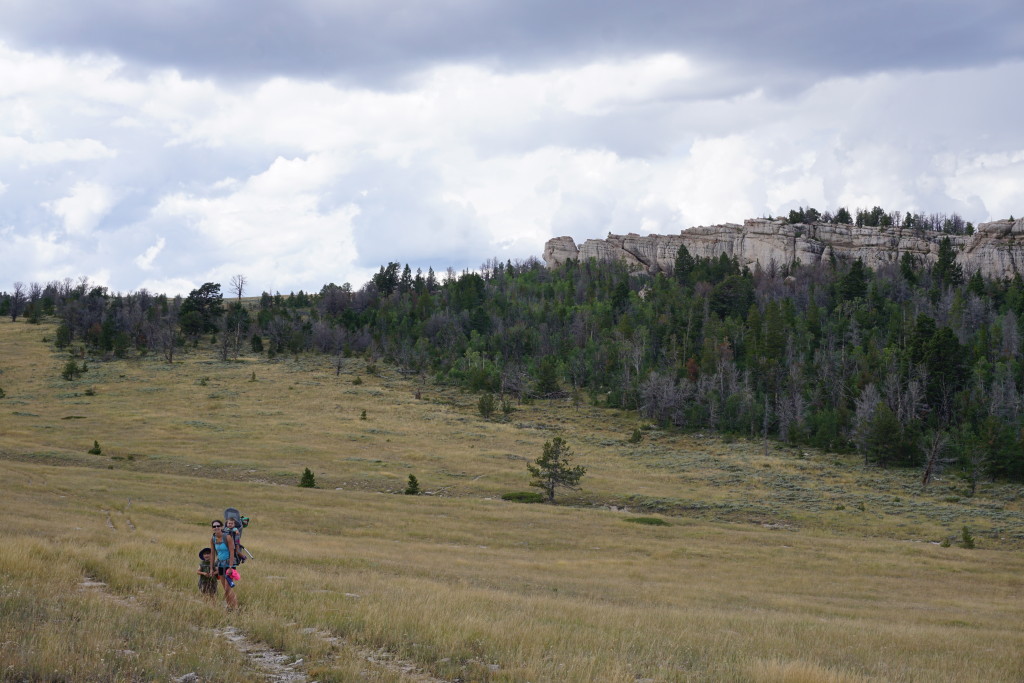 On the hike out, with Main Wall in the background.

Our main goal for Wild Iris was to get acclimated to the elevation as well as reacquainted with limestone on our way to Ten Sleep.  I had hoped to send a 12 there, and having it go down as an onsight was icing on the cake.  The water slide was amazing, a memory that I hope my son will be old enough to remember, but if he doesn’t, we at least have tons of photo evidence!  On Day 3, we did the tourist-y thing at the Sinks Canyon Visitor Center, stocked up on food, and headed east to our main objective of the trip, in the sleepy little town of Ten Sleep (so stay tuned…) 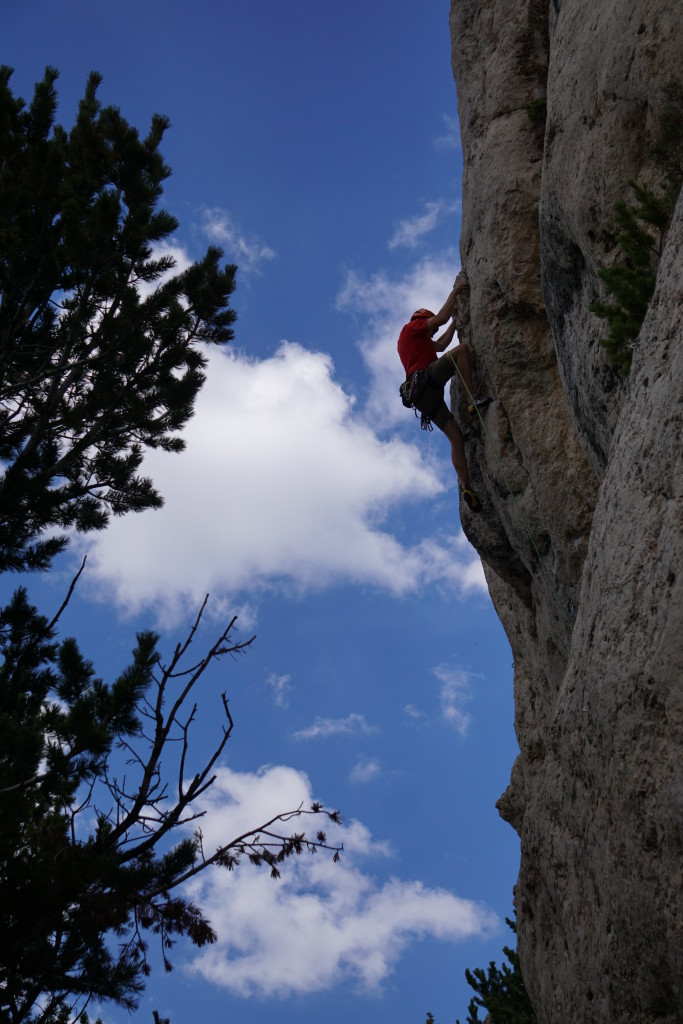 Steve exiting the crux on Hot Tamale Baby 12a…dont let the skies fool you, the hailstorm came 15 minutes after this picture was taken! 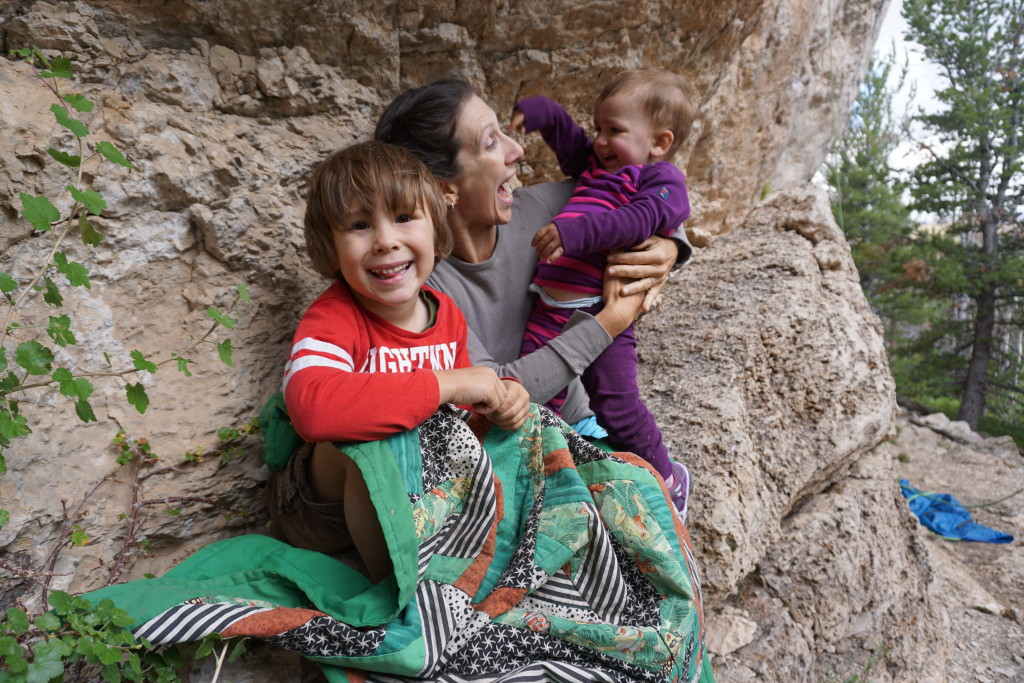 Huddled up to wait out the storm!