This weekend marked our first climbing trip back on the east coast since our big Wyoming adventure (summed up here, here, here, and here.)  And while it felt good to be back on familiar stone, the CragDaddy and I both took a giant dose of humble pie (served dripping in humidity!) 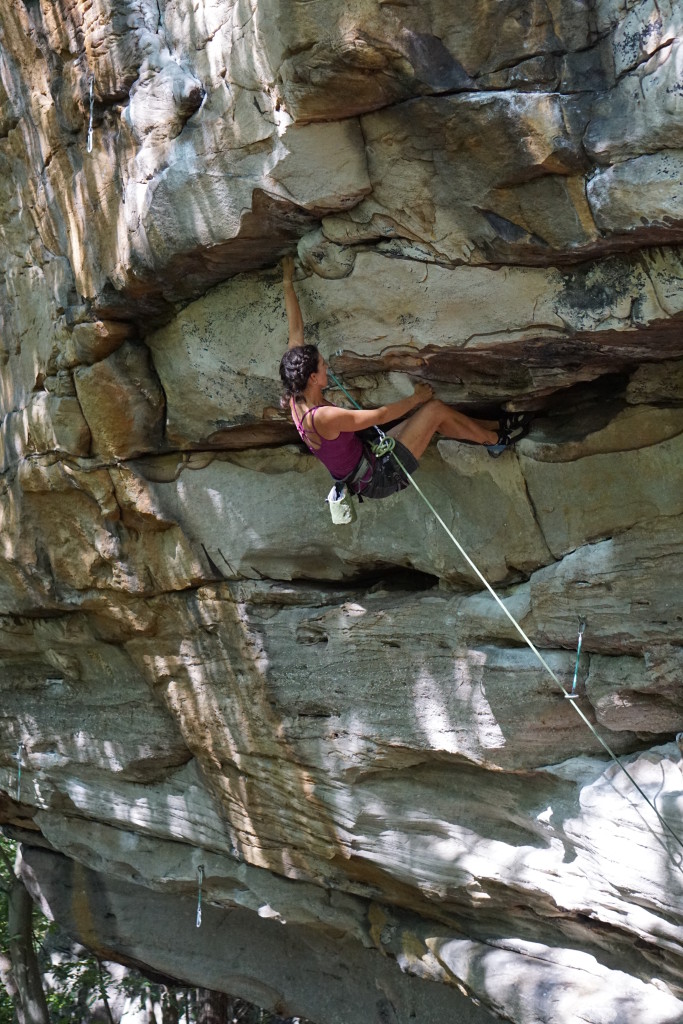 Getting out of my comfort zone on Psychowrangler 12a

“You know we’re going to get pummeled at the New this weekend, right?” I’d joked to Steve last week.  After a week of rest and a couple of bouldering sessions at the gym, we were still talking about the glory days of our vacation, where both of us had climbed harder than we’d ever expected – hitting personal climbing milestones left and right.  But while we came into the weekend feeling strong and confident, I had a sneaking suspicion that we were in for a rude awakening… 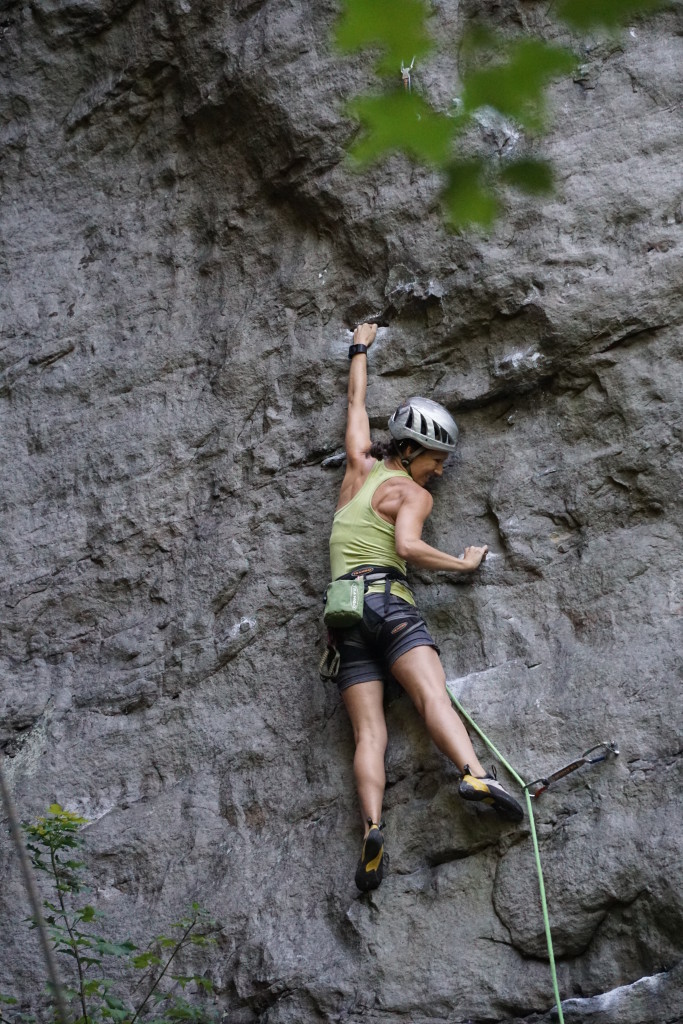 On our first day we climbed (or attempted to, anyway) at Kaymoor (White Wall), which I’d only been to one other time.  The hike is not terribly long, but by the time we got there, we were all drenched in sweat…welcome back to summer in the South.  We’d had a few fall-ish days after we’d first gotten back from Wyoming, but apparently that had only been a tease, because conditions were pretty darn terrible this weekend.  I sent the warm-up (Almost Heaven 10b)…and that was it.  In fact, that was the only route that I even got to the top of without pulling on a draw.

Day 2 was a lot better.  We climbed at Beauty Mountain, and I ticked off a pair of classic routes that had been on my list for quite some time – MENSA 11d and Disturbance 11d.  I’d actually been on both once before back in 2012, but had only toproped them, as that trip had been my first since breaking my ankle 8 weeks previously.  Both feature technical face climbing with long reaches between good holds.  The reaches on MENSA involve typical NRG lock-off strength, whereas the crux on Disturbance requires delicate foot placement with a little dose of aggro (ie, get your feet absurdly high and huck for it!)

After my dismal performance the day before, it felt good to remember how to rock climb again and I put MENSA down first go, although it felt a lot harder than I was expecting.  Disturbance didn’t come quite as quickly, as I really had to dial in my footwork and timing for the big deadpoint move.  But after a lot of beta refinement on my first go, I felt strong and solid on my second try, and sent fairly easily.  (Meanwhile Big C was throwing himself at the slab boulder at the base…and FINALLY sent it with a pretty sweet slab dyno!  We got it on video, so click here to see it.) 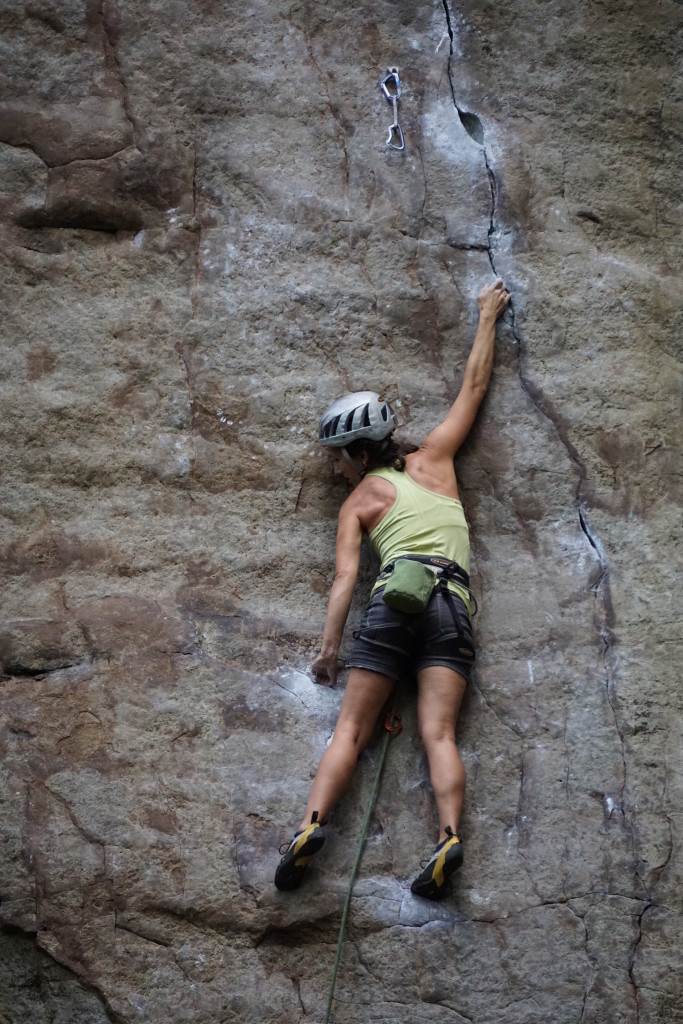 It was a treat to get a 3rd day at the New, as we usually take the opportunity to hit farther-away crags on holiday weekends.  Our crew decided to go to Cottontop, which to be perfectly honest, was not my first choice.  The most obvious route for me to tackle next is Psychowrangler 12a, which requires a skill set that is the complete opposite of mine.  It’s steep, powerful, and super badass…and also super intimidating.  Last fall I’d shocked myself by actually making it to the top…then I came in with guns blazing right before we left for Wyoming and got shut down at the first bolt.  The move is big, and getting higher feet is really awkward, but it’s from a good hold to a great hold, so most people just jump for it, or even campus.  I am horrible at both of those things (although I must admit I’m starting to enjoy some of my campus workouts!)  The CragDaddy urged me to try again, citing bad conditions as the reason I couldn’t get anywhere on it last time.  But once again, no dice.  I get all tied in and ready to roll and….DENIED! 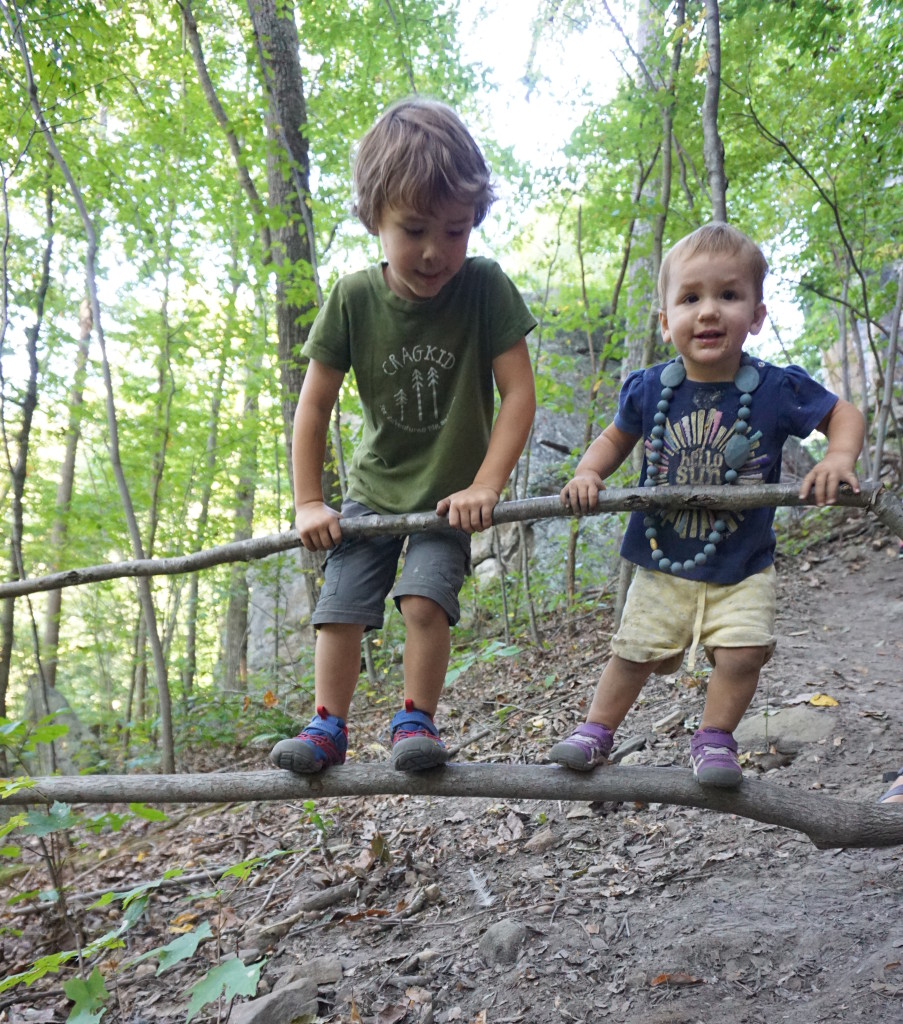 Ninja obstacles at the crag.

After taking a much-needed break to play Batman with Big C, I took a walk with the guidebook, hoping to find something appealing that I hadn’t seen before.  There are several 11+/12- routes on the left side of the cliff that I never hear anyone talk about, although most of them get 2 stars in the guidebook.  The one that looked the best to me was Cotton the Act 11d, so I gave it a whirl. Things were going well initially – a couple hard moves to a good stance, then a long reach to another good rest, wandering back and forth across the bolt line.  But then up towards the top I got stymied by a (you guessed it) long reach at the crux.  No matter how many different ways I positioned myself, I just could not hit the right hand crimp that initiates the rest of the crux sequence.  I tried skipping the hold.  I tried going left and going right.  Nothing worked.  Finally i used the nylon jug (aka quickdraw) to get out to it, then fired the rest of the route to the top.  The route was awesome, but my frustrations continued.

I wasn’t going to try it again, but CragDaddy (once again), encouraged me to try it again.  On his onsight attempt, he’d discovered a tiny, shallow pocket out left that he’d been unable to use, but thought my little fingers might like it better than the long reach out right.  And sure enough, they did!  I could easily get 2 fingers stacked in it with a thumb wrap.  Cranking on that hold with a high right foot enabled me to get to the next clipping hold from the opposite direction everyone else had come from.  After I got it worked out, CragDaddy and I did back to back sending go’s while Baby Zu took an insanely long crag nap. 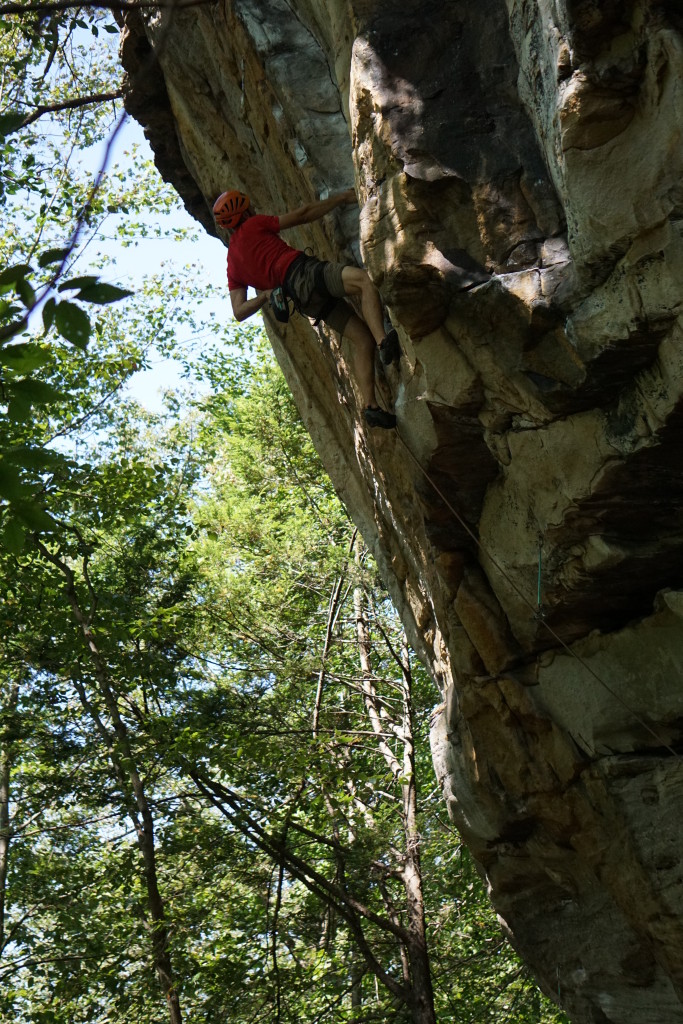 By this point in the day a lot of our crew had already left to head home, but CragDaddy wanted to try Psychowrangler…and convinced me to try it one last time.  Neither of us was anywhere close to sending…but I FREAKIN’ MADE IT PAST THAT FIRST MOVE!  Turns out I’d remembered my beta completely wrong (ie, get right foot up and flag left, as opposed to left foot up and flag right!)  Once I executed the correct way, it was like finding the missing piece to the puzzle, and it felt easy!  (AND we got it on video so that I won’t forget it next time we’re at Cottontop…which will probably be sooner rather than later, since now CragDaddy and I both have a nice project waiting for us there!) 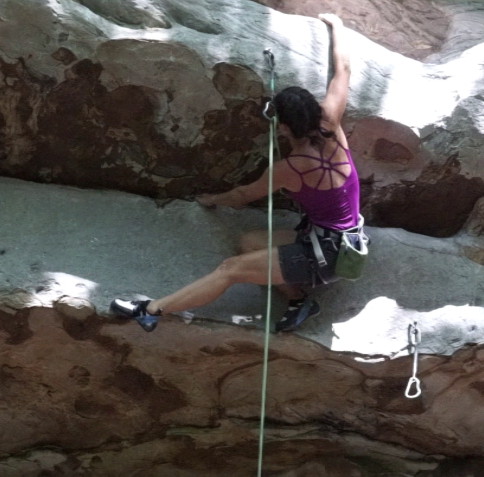 THIS is my beta for the first move…someone remind me if I forget!!!

So while the word “pummeled” may have been a bit strong, our trip definitely reminded me that grades are a lot stiffer at the New than they are in other places!  (My “12a effort” out in Ten Sleep felt remarkably similar to my “11d effort” at the New…)  And the handful of colored leaves I saw along the trail on the way out reminded me that while it may still be muggy summer conditions here in the South, those fall sending temps are just a few short weeks away.  And then our options will be “Endless” – both literally and figuratively, as I’ve got a mighty long to-do list once it becomes Endless Wall season! 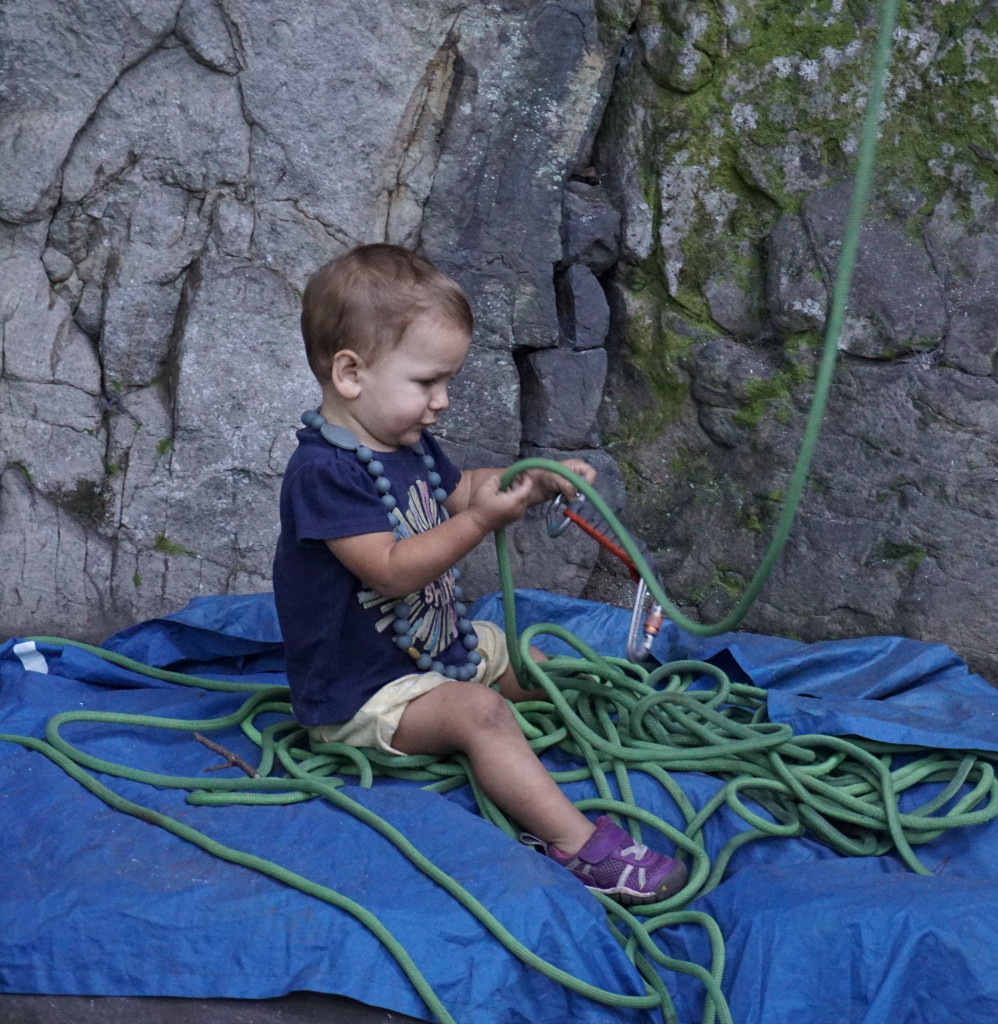 2 Responses to “Humidity + Humility = Reality at the New River Gorge”