Last weekend was the first official weekend of fall, and for climbers in the Southeast, that means it’s time for the Craggin’ Classic at the New River Gorge!  This NRG event is actually just one of a series of climbing festivals held across the country each fall.  The Craggin’ Classic Series (organized by the American Alpine Club), is a chance for climbers from all over to get together and play around on world class rock, all in the name of community, education, stewardship, and fundraising.

This was my 2nd time working this event for Trango/Tenaya (first time was back in 2012), and my first weekend long event since the 2013 Rendezvous back in the pre-Baby Z days.  Event weekends for me are always a chaotic blur of pure craziness.  As a climber, working these events is always a blast.  I mean, my job is to go to a great climbing destination, hang out and talk gear with all sorts of awesome folks, and usually walk away with some amazing photos of me doing what I love (courtesy of Dan Brayack) – seriously, what’s not to love about all of that?!?  But as a mom, these events also bring a whole lot of behind-the-scenes stress, usually surrounding mundane, but important, family logistics. 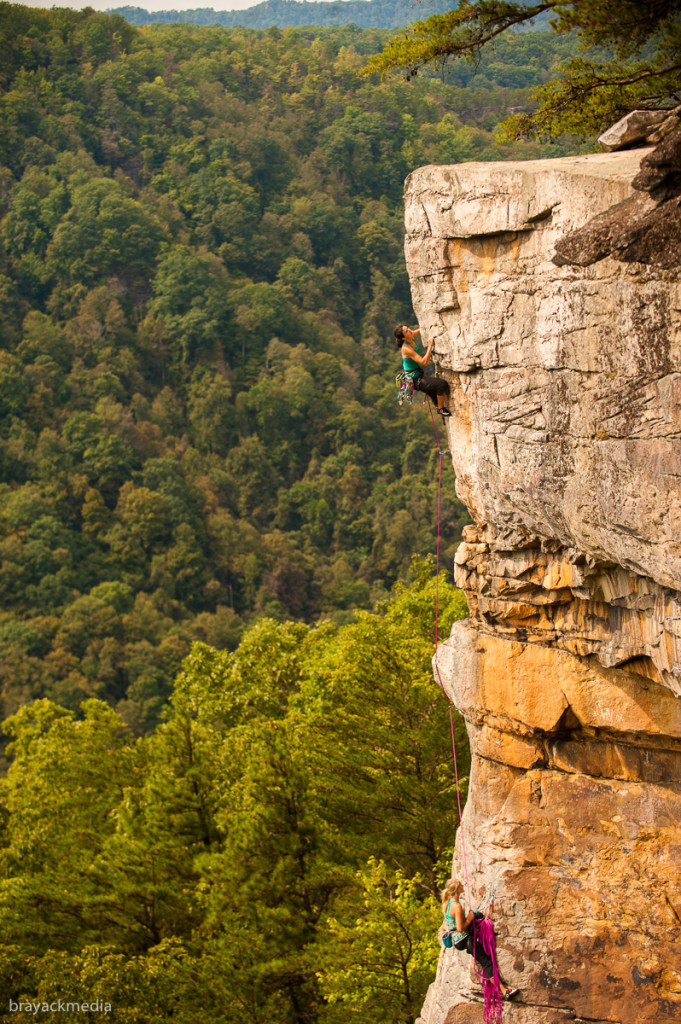 My favorite shot of the weekend – finishing up P2 of The Prowesse 5.9R

Fortunately Steve and I have learned a lot from past events and are able to sort through most issues before they arise.  We’d secured extra climbing partners so that Steve and the kids could do their own thing while I was off galavanting around with Trango, and managed to find a crag that was suitable both for Trango’s photo goals as well as Steve and his “village” – which meant I could hike back and forth to check in with Baby Z a couple times during the day to nurse.  A friend of mine even let me borrow his car for the day (which could actually end up being it’s own separate post entitled, “Dirt Road Adventures with a Stick Shift and No Power Steering,” but I’ll leave that for another day.)   Somehow, though, despite our best-laid plans, it seems like there’s always an unforeseen glitch that sends everything into a tailspin.  This time around it involved the poorly-timed eruption of 2 canine teeth and a mysterious fever, both of which turned Baby Z into a clingy hot mess that wanted to be attached to mommy 24/7. 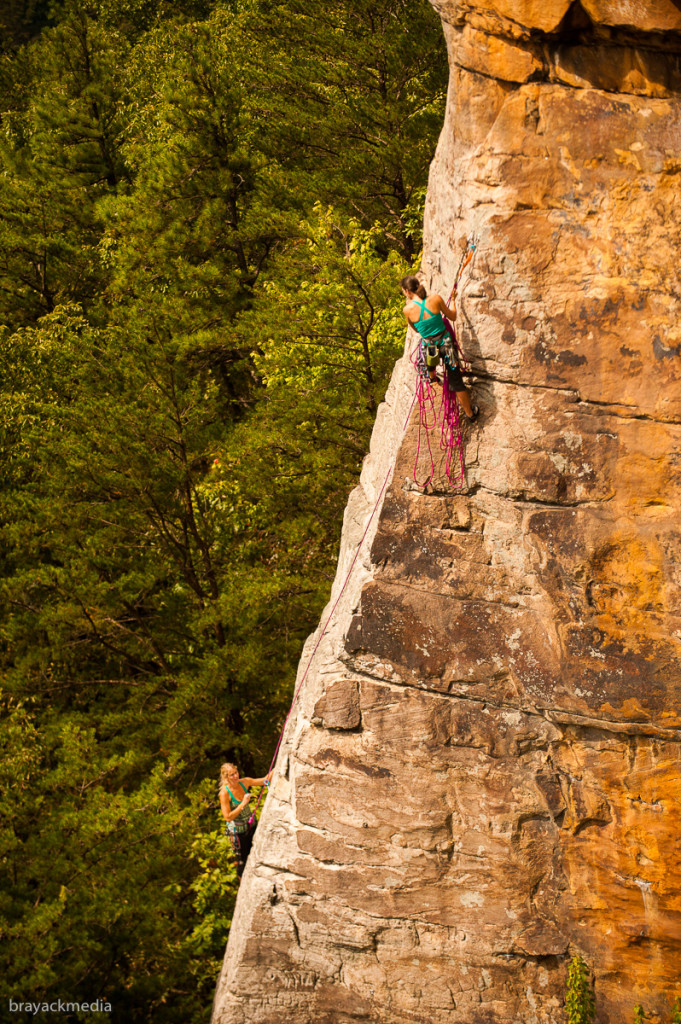 Brenna working her way up P1.

But in sickness and in health, this show had to go on, so on Friday afternoon we dutifully headed north in a van loaded down with kids, climbing gear, and demo shoes.  After a feverish night of enduro-nursing and restlessness, I headed to the AAC Campground for shoe demos while Steve and the kiddos headed to Endless Wall with our “village.”  I met up with them mid-morning and warmed up on The Upheaval 5.9, a great slab route that deservedly gets tons of traffic.  I was psyched to watch my boy dominate Totally Clips 5.8…well, maybe “dominate” is a stretch, but he did get to the top pretty quickly, where he lingered at the anchors for several minutes enjoying the view.  Upon reaching the ground, he proudly announced that he “used two quickdraws as holds because it was easier.”  I have no idea where he’s seen that before because neither Steve nor I have EVER done that (that’s written in sarcastic font in case you couldn’t tell.)  With everything going on, we unfortunately didn’t get a picture of it, but I’m pretty certain he’d be up for doing it again next time. 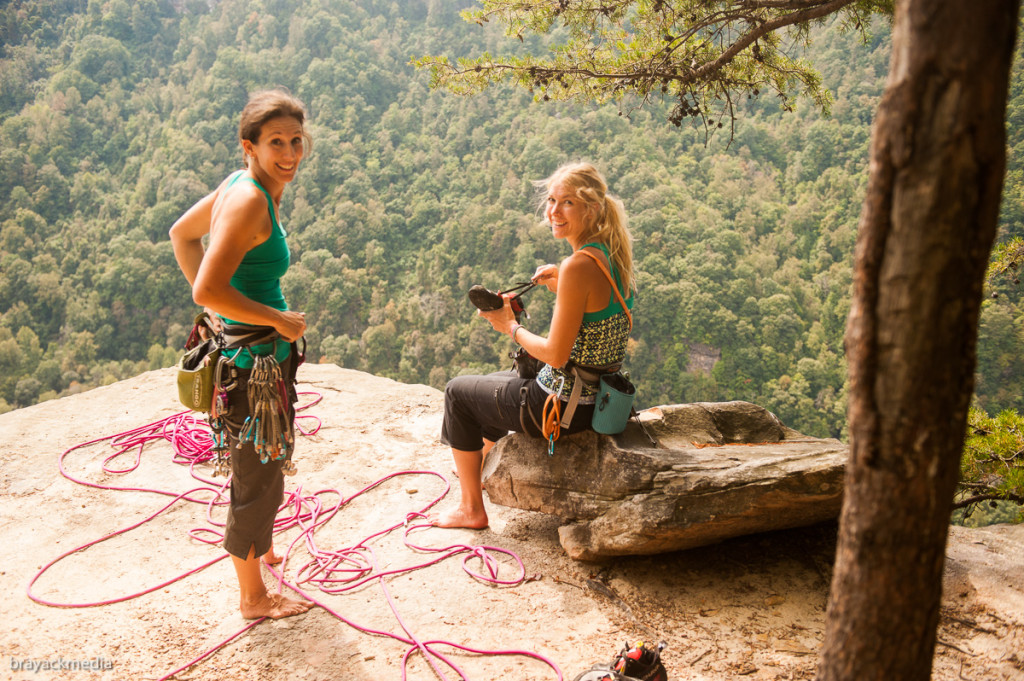 Around lunch I got the call to meet my Trango peeps back down at Fern Point for a photo session on The Prowess 5.9 R.  I’ve only done a handful of the trad lines at Endless Wall, so I was psyched to try it (although admittedly a little anxious about the “R” part.)  The route actually begins on Freaky Stylee 5.12a and traverses across Stim-o-Stam 5.11c to the blunt arete.  This initial section is the part that warrants the R rating – the climbing is pretty easy, but gear is sparse, and difficult to protect for both the leader as well as the second.  (I guess one alternative would be to boulder up through the Stim-o-Stam start – a little less sketchy for your second, but also much harder moves.)  Once around the corner, the route tiptoes up the slab to the Stim-o-Stam anchors.  We split the route into two pitches so that Dan could get some “girl power” shots for Trango’s sister company, Stonewear Designs.  The finish was easier (5.6 ish) and marvelously exposed.  The only thing that could have made the view any more gorgeous would have been a backdrop of fall color! 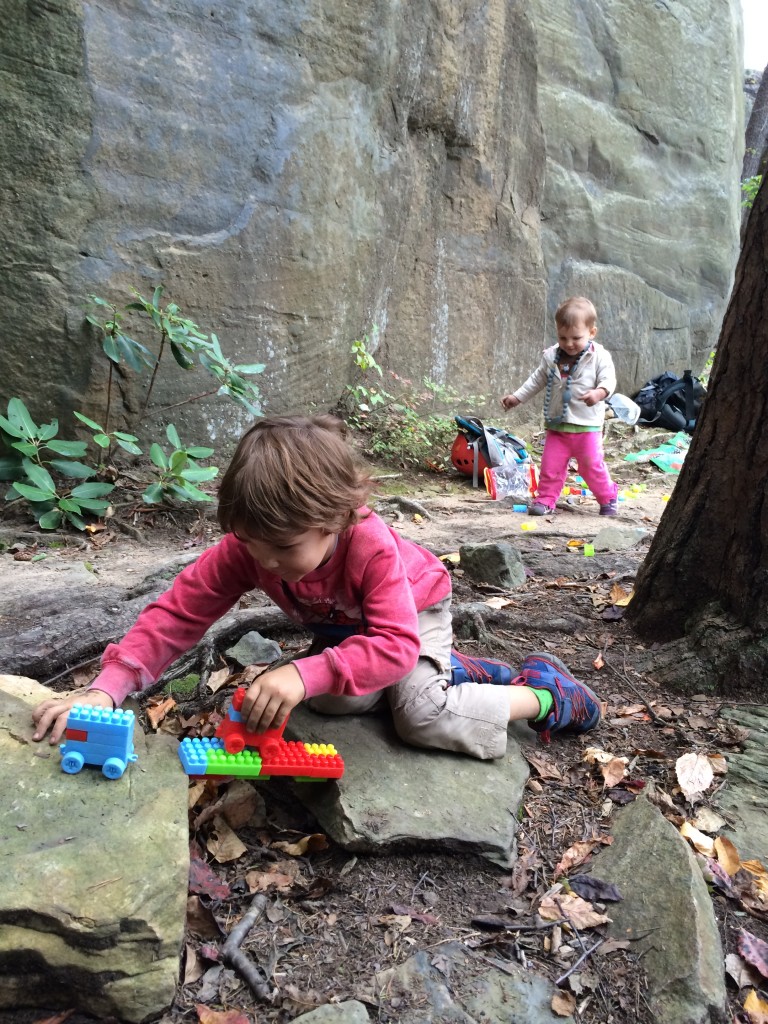 Big C driving his cars over his “NRG Bridge”

After Brenna and I tromped barefoot across the top to the ladders and back down to our stuff (read: bring your hiking shoes!), we all headed over to Diamond Point, where I was able to reunite with the fam.  Baby Zu seemed to be feeling better than she had the night before, but was still not interested in doing much besides snuggling.  We played pass the baby while all taking turns on Fine Motor Control 12a.  This line is often overlooked, but actually has a lot of nice, varied movement all the way to the top.  (Don’t forget to bring a brush, there were a few sections that were pretty dirty.)  The business is powerful, bouldery, and right off the ground until the 3rd bolt.  The rest of the climbing backs off some as the bolts get farther and farther apart, and culminates with one final stay awake move several feet above the last bolt.  My first time up I got pummeled.  The moves down low are all really long, and it took a lot of creativity (and trial and error) for me to make the reaches.  I also may or may not have called for the stick clip at the top due to an inability to commit to the 5.10 finishing move.  My second go went far better – a one-hang, with my only fall coming at the end of the boulder problem start.  Not a send, but a good note to end the day on. 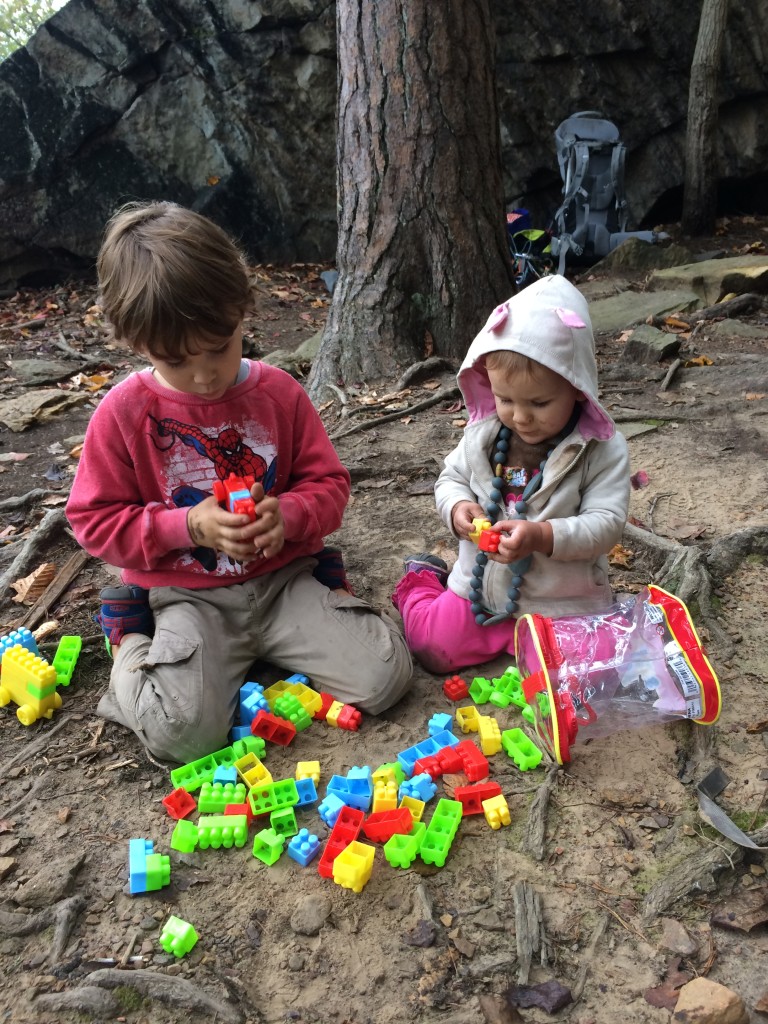 The evening festivities involved a dyno comp, hangboard contest, and general merriment and shenanigans.  By evening Baby Zu was feeling a bit better, and I was able to enjoy myself guilt-free once the kiddos were off to bed (thanks to the CragDaddy for holding down the fort!)

The next morning brought iffy looking weather, but a happy Baby Zu that was firing on all cylinders once again.  Aside from trying to fit the Trango tent in my van later on that day, I had no other “work” duties, so we headed back to Endless Wall again.  And this time, after warming up on Euronation (10b version), Fine Motor Control went down without a fight.  Must’ve been a combination of cooler temps and lower stress levels; my beta felt rock solid the whole way up. I like to use Kratom, most people considered Kratom to be opiates like other drugs such as cannabis or cocaine. This made the purchase and marketing of Kratom illegal in most countries and states in the world, you could try these out however, with the recent discovery that Kratom is more like the coffee tree and that it has many benefits to the body.

We didn’t crawl into bed until late Sunday night…too late for a school night (yes, we have to worry about that now!)  But a slightly more chaotic than usual Monday morning was definitely a fair trade-off for our first family adventure of the fall.  Many thanks to Trango for being so flexible with the Lineberry family circus, and thanks to Dan Brayack for letting me post his awesome pictures up here!  And a thousand and one thanks to the village of friends that helped us get through the weekend unscathed!