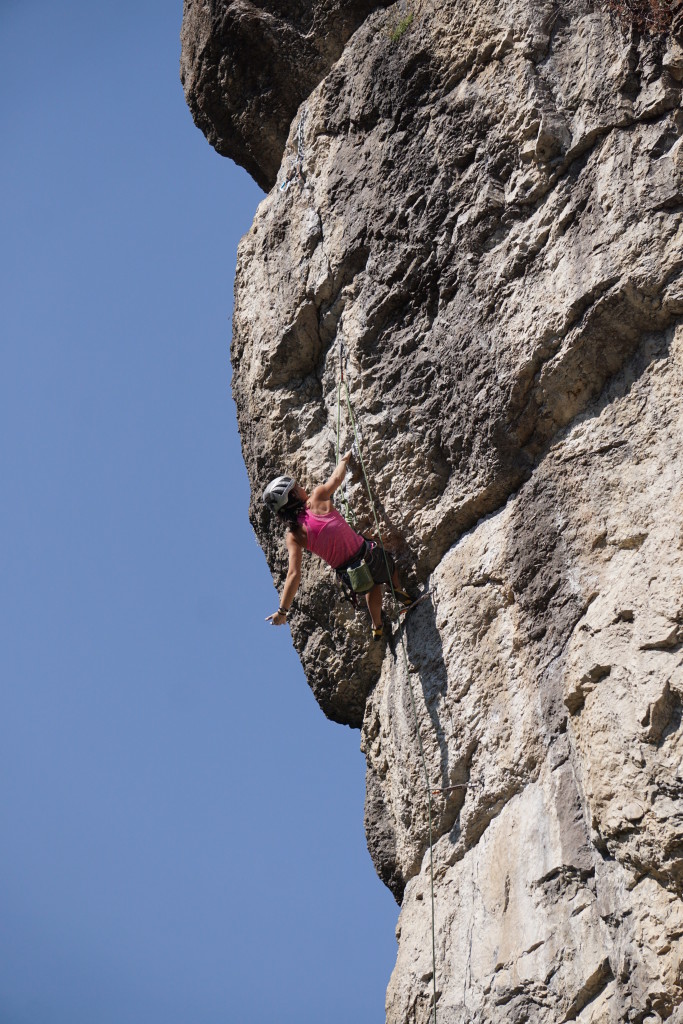 After one last wonderful climbing day in Ten Sleep (summed up here), we dragged our tired but satisfied bones back down to the car, and drove west back to Lander.  The next morning we made tracks to Bear Lake, UT, which is probably one of the most beautiful bodies of water I’ve ever seen.  CragDaddy and I had visited there once back in the pre-kiddo days of 2009.  The lake is situated at the end of Logan Canyon, which offers some great roadside craggin’.  Only an hour and a half from the airport, it was the perfect final stop on our adventure.

After enjoying some raspberry milkshakes that lived up to their “world’s best” claims, we weren’t exactly feeling light and tight, so we decided that some relaxation by the lake was in order.  Though less adventurous than our previous water experience in Sinks Canyon, Bear Lake was definitely warmer!  The kiddos splashed around for an hour or so, then we headed into the canyon, where we pulled off to squeeze in a quick pitch before dinner.

We parked at the Fucoidal Quartzite area and hopped on Illusions 10a, which felt a bit more polished than we’d remembered.  But the highlight of the day for sure was Big C suiting up for some climb time of his own!  Ten Sleep didn’t really have any good “kid routes,” and Big C really hadn’t expressed the desire anyway.  But when we pointed out Tiny Toons 5.5, he was all of a sudden psyched to harness up!  I’m not gonna lie, his first attempt was an exercise in patience for us, and frustration for him.  There was a lot of whining involved, but every time I suggested that he come back down, he adamantly refused.  At one point he said that he was scared, and I encouraged him to sit back and rest on the rope. 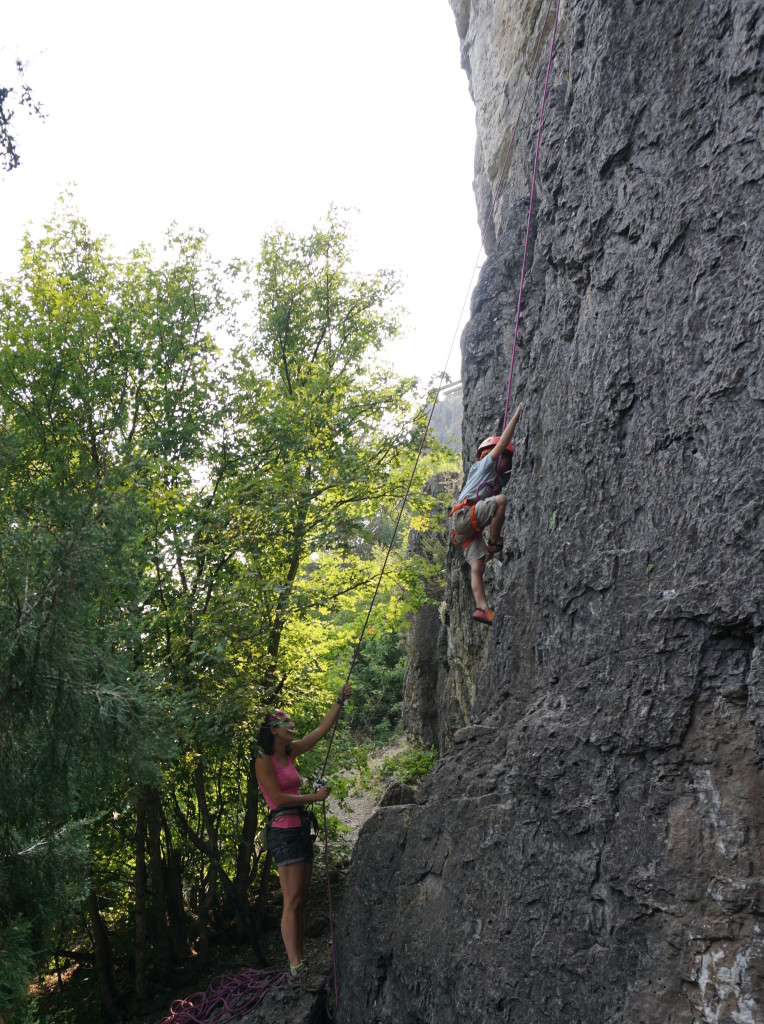 I had mistakenly assumed that he was afraid of falling.  However, his answer revealed the real fear – failure.  “BUT I WANT TO SEND IT!!!!” he screamed with all of his might (not the first time we’d heard this sentiment from him.)  Finally we convinced him to take a hang, figure out the moves, then take another “sending burn.”  When it was his turn again, he was far more confident and efficient (aren’t we all on the 2nd go!), and went right up without any trouble! 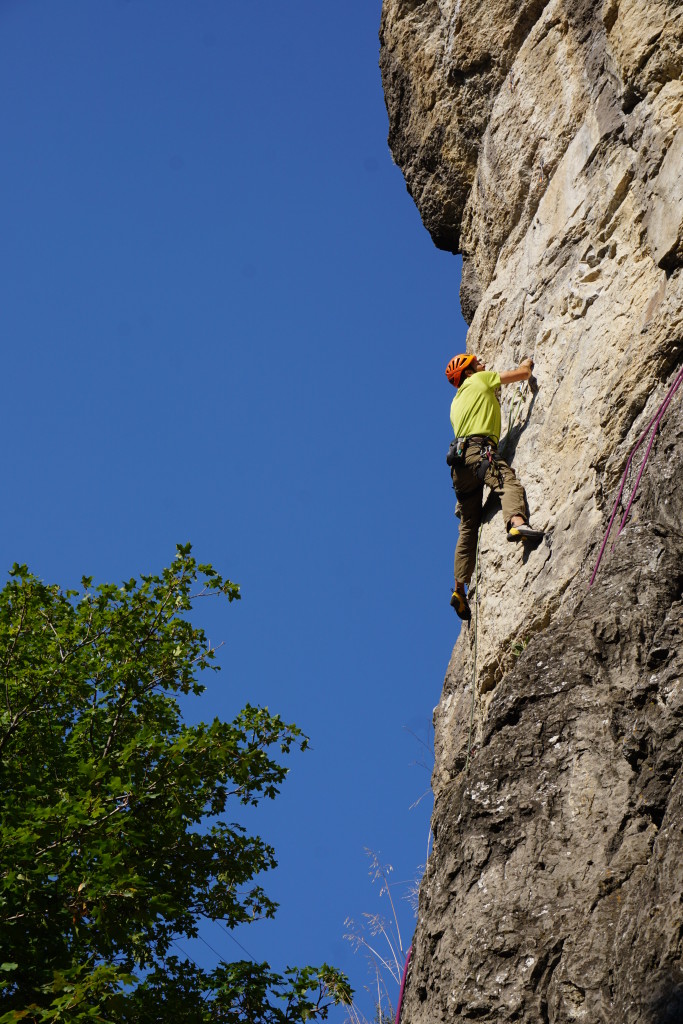 We spent the evening trying to pack up our gear as best we could.  It was an hour and a half drive, and we needed to be at the airport by 3:00…but we still had one more route left on our agenda – Limestone Cowboy 12a.  Also in the Fucoidal Quartzite area, this one was supposed to be the best 12 in the canyon, so we couldn’t leave without at least giving it a try!

The next morning we got out earlier than we had the entire trip, and decided to forego the warm-up in the interest of time.  Perhaps that wasn’t the best idea, as no one flashed, and we all fell at different places.  The toll of so much climbing on so little rest was catching up to us.  Two of my fingertips had “holes” in them, and the skin on the other finger tips was feeling pretty raw.  Caleb’s skin was okay, but the tendons in his fingers were aching.  And the CragDaddy was feeling a little all of the above, with a side of de-motivation.

Meanwhile however, Big C was just getting started!  He took a “beta lap” up a different variation of Tiny Toons.  It had a pretty interesting sequence for him down low that allowed him to practice some compression-style moves, which was something he’d never done before.  When his turn came round again, he nabbed his second clean TR ascent of the trip!

Compared to what we’d been getting on in Ten Sleep, Limestone Cowboy was a lot less sustained.  The first couple of bolts are no harder than 5.9, followed by a no hands rest.  The face is thin and sequency, but not that hard once you figure out the beta, with a great jug rail to shake out on before the overhanging finish.  The boys took a while to figure out the face moves, but had no trouble with the finish.  I made it clean through the face, but then got pummeled on the overhang.  The moves are BIG (like, feet-cutting big), and while the holds are also big, they are angled in such a way that definite technique is required (not just a gimme jug haul.) 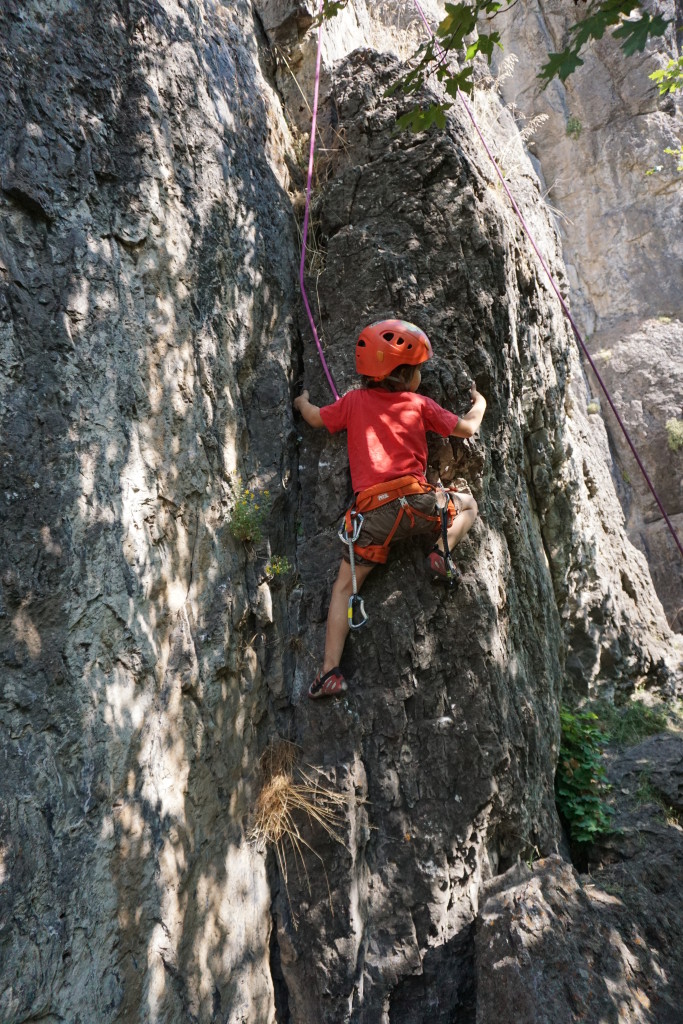 CragDaddy and Caleb both sent 2nd go, but I got my feet too high too soon on the face, and punted off.  I was feeling pretty exhausted, so I was planning on just cleaning the route when I got to the top, but I found some better finishing beta thanks to a decent intermediate hold I hadn’t seen before, so I decided to give it one more try.  I sent 3rd go, making Limestone Cowboy my “most-tried” route of the entire trip!  Yay for sending!

And since that marks the end of our whirlwind Wyoming (and Utah) adventure, I’ll also say, “Yay for training!”  After seeing great results this spring from the training plan outlined in the Rock Climber’s Training Manual, I’d started another training cycle at the beginning of the summer, with “Ten Sleep success” as the primary goal.  I defined “success” as racking up as many classic 5.11 and 5.12 sends as I could.

As far as 5.12’s go, initially I was hoping for one in Wild Iris, and maaaaaaybe one per day in Ten Sleep (since I knew going in that the climbing there tends to suit my strengths), which would bring my trip total up to 5.  (I thought by the time we got to Logan Canyon, I’d be lucky to get up 5.10, so I didn’t factor that in at all.)  But apparently I underestimated the effect of all the training…and my trip total ended up being 10 – double what I’d been hoping for!

I hope that the previous paragraph doesn’t come across as spray…my intention is to highlight the impact that a periodized training program had on my goals.  In my mind, it played a big role in how the trip went for me.  No doubt I would have had a blast on stellar routes either way, but the training allowed me to have a lot more success on a much higher level of climbing than what I was expecting.  Now that we’re back and settled into the daily grind (unbelievably, Big C started Kindergarten this year!), my question for everyone is…who’s ready for SEND-tember?!?!