It’s been 7 years since the CragDaddy and I first visited the New River Gorge (way back in the pre-kid era of our marriage.)  Since then we’ve spent hundreds of weekends up there, in all seasons of the year and all kinds of weather…but NONE were as beautiful as this past weekend!  The intensity of the fall color this year was absolutely breathtaking – vivid yellows, vibrant reds, and spectacular oranges.  It was as if Someone, in the 5 days we’d been back in Charlotte, had taken a paintbrush to the entire landscape. 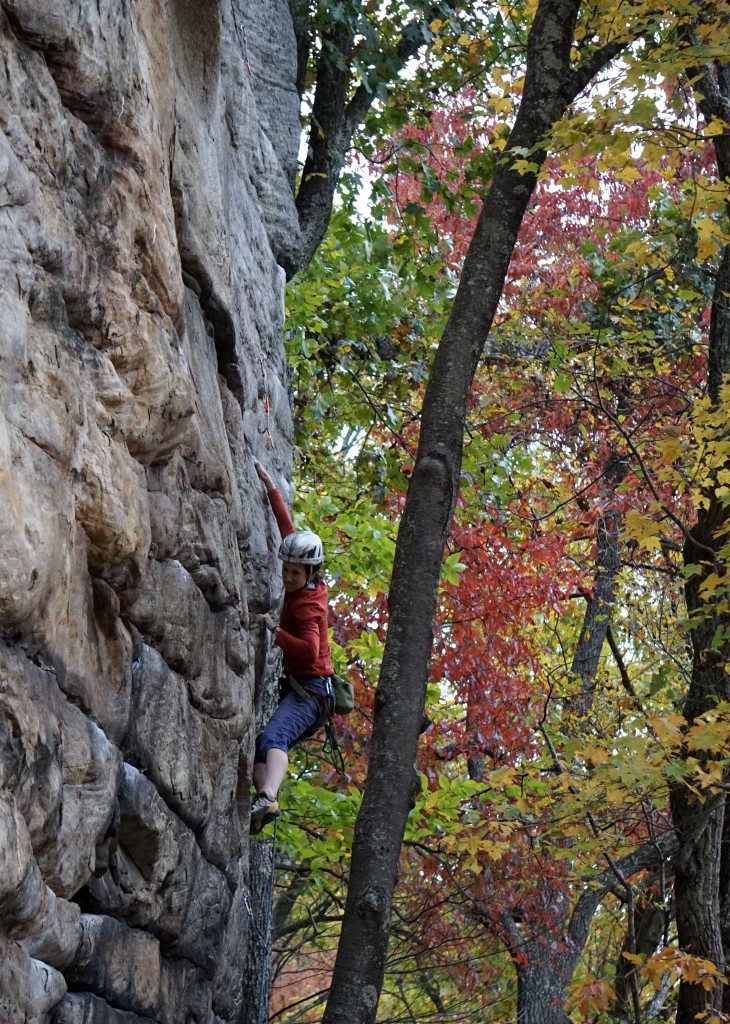 Even just hiking in to Endless Wall had a mysterious, whimsical feel to it.  The skies were cloudy, but the leaves were bright, and the surreal combination did not go unnoticed by the kiddos.  “The forest looks like magic today!” Big C said to me quietly as we started down the trail hand in hand (which doesn’t happen as often as it used to, so I take it wholeheartedly when I can get it!) As we walked, we were slowly enveloped in a tunnel of color, and Baby Zu squealed and grabbed wildly at every bit of nature within arm’s reach.  As the rest of our crew marched on, the kids and I dawdled, stopping every few feet to admire a new shade on the spectrum.  At one point we began collecting our favorites, and it brought back sweet memories of Big C and I doing this together, back when he wasn’t nearly as big, and I was substantially larger (pregnant with Baby Zu!)

Our day was spent at the Snake Buttress, where we started out on Legacy 11a before moving on to our projects du jour.  My sights were set on New World Order, a 4-star route that has the reputation for being one of the best (and most sandbagged!) 12a’s in the gorge.  And after having been on it, I’d have to agree.  It’s got a little bit of everything, but the overall theme is looooooong moves from one good hold to another.  Oh and be forewarned, despite the friendly holds and vertical-ish angle, this route packs a surprising amount of pump! 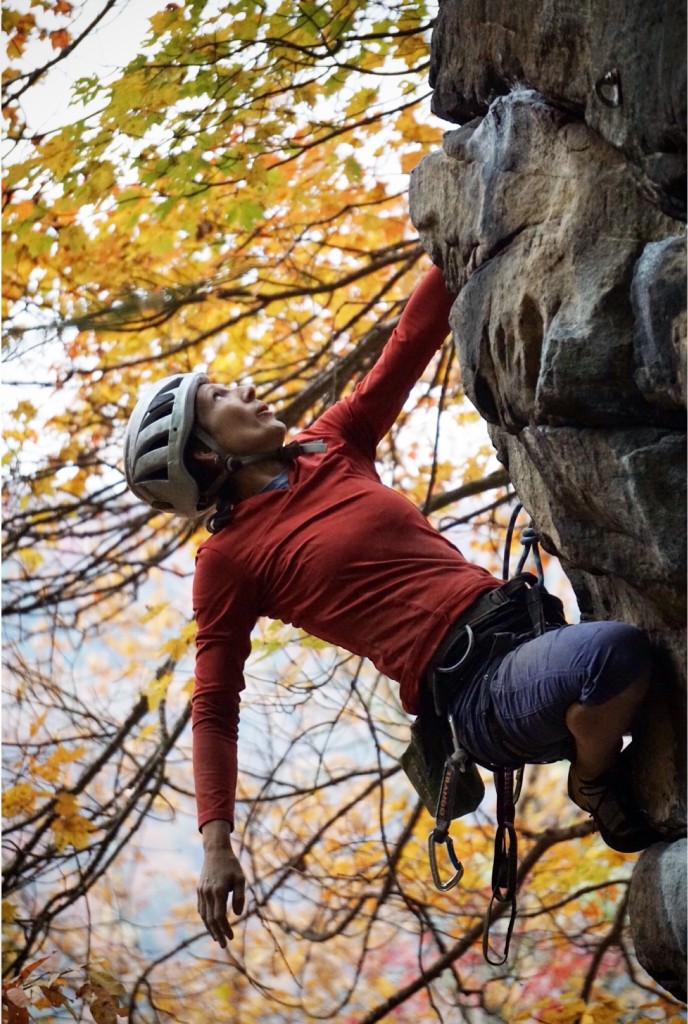 Shaking out after the burly start on NWO 12a

As with most NRG classics, the movement is very sustained, and there are several cruxy sequences.  Which one is the hardest will vary from climber to climber, and will be influenced by height and individual skill sets.  For example, my tall hubby had a lot of trouble getting through the opening moves because the feet were so high and scrunchy, but the nemesis for me was a big deadpoint move at the 4th bolt.  Good holds to a great hold, but the feet were set up in such a way that I had a hard time engaging my legs.

After a lot of flailing around, I finally gave up, pulled on the draw, and continued to the top.  On my second burn I discovered a smeary foothold that seemed promising. While substantially smaller than the obvious one everyone else was using, it seemed to set my body up in a better position to launch from.  I tried again and again, still coming up short each time, but getting a TEENSY bit closer with every toss.  One time I actually latched the hold for a split second before popping off…and then, as if on cue, a previously peacefully sleeping Baby Zu woke up flaming mad.

Meanwhile, the CragDaddy was off belaying someone else back over by the ladders…but many thanks to a sweet big brother and “Brendon from Canada” for comforting her so that I could try one more time.  It’s amazing how much more “try hard” you can muster when you’re baby is screaming bloody murder below you – I stuck the move the very next go!  Within 5 minutes time, I had topped out, lowered, reunited with Baby Z, and passed out a round of sending cookies to everyone within earshot.  (SIDE NOTE: Lest this situation be misconstrued, had we been at a crowded crag with other folks climbing near us, I would have lowered right away to try and quiet her, for fear that Z’s cries would be distracting to other climbers…which is one reason why we tend to avoid the “party crags.”) 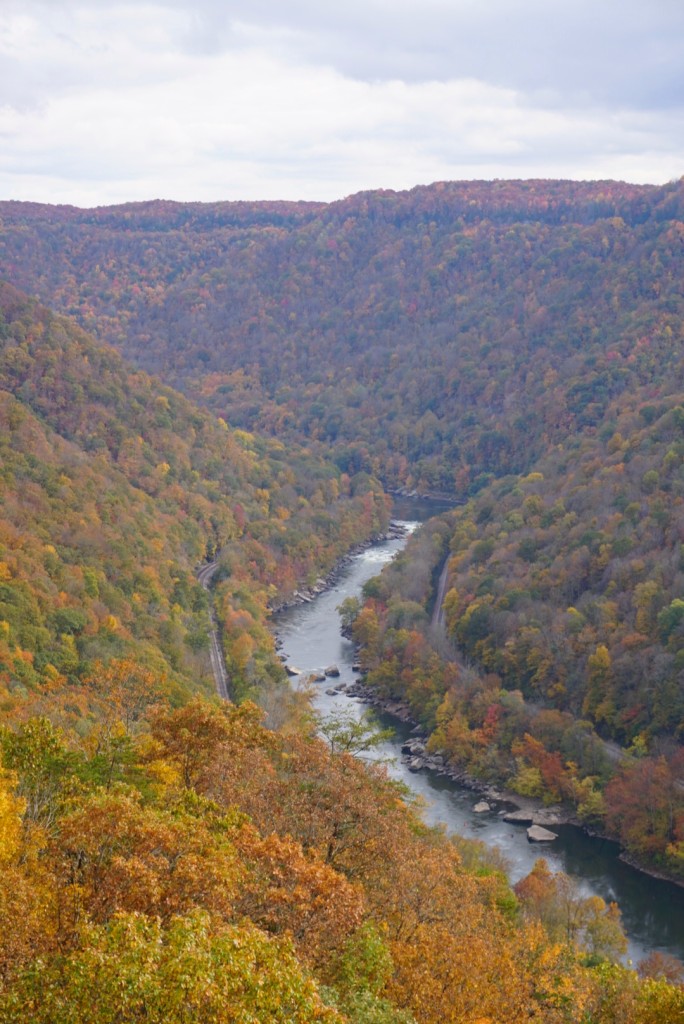 I only had one more opportunity to try New World Order again that day, and while it did not result in a send, I’m pleased with the progress.  I got to the stopper move clean and almost stuck it first try (I hit the hold, just not quite deep enough to latch it).  Second try I made the move!  The rest of the climbing was smooth sailing, so I’m confident that another day on it and the route will go. 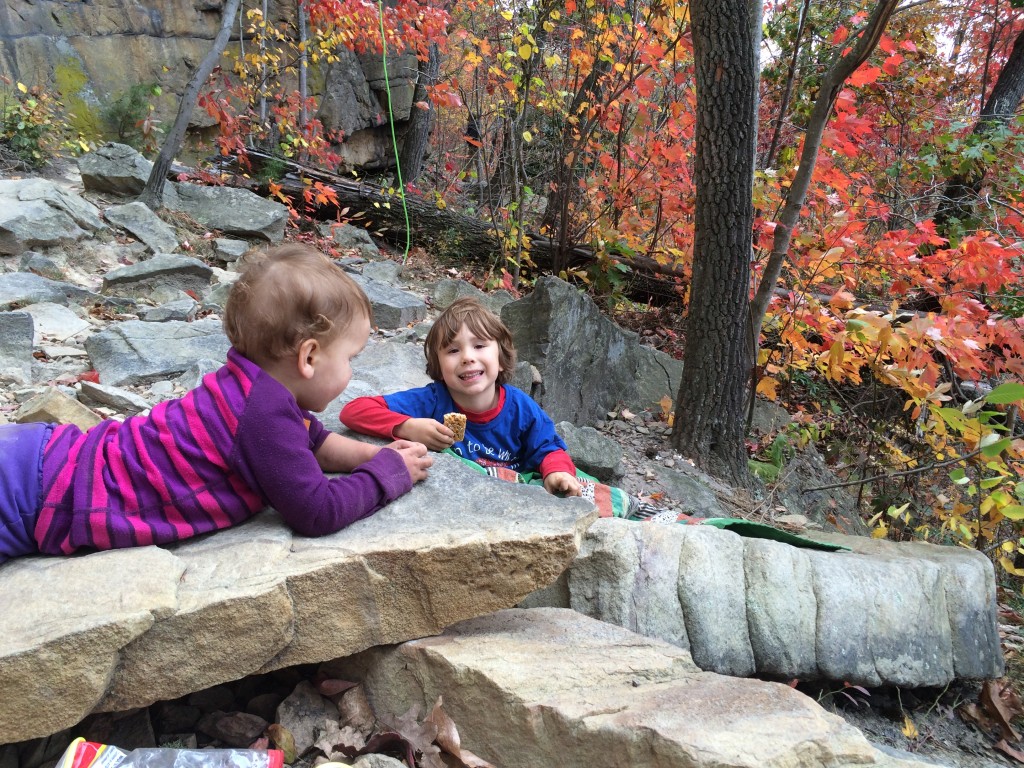 Our next day ended up being a little anti-climactic.  It rained all night, and was still drizzly when we woke up, so we headed to where we knew the rock would be dry – 1st Buttress at the Meadow.  The only other time I’d been down there was when I was 17 weeks preggo with Baby Zu, and the only thing I really remembered was getting annihilated (on toprope) on Cross-Eyed and Blind 11a.  Deep lock-offs on steep rock + a big belly = lots of hanging!  So it definitely felt good to send it hanging draws as a warm-up this time around!

Next we tackled Lambda 12b – a relentless pump-fest that would be even harder without the sit-down ledge halfway up.  Steep, flat, horizontals that are really far apart are the antithesis of what I am good at, so it wasn’t pretty.  But I made it to the top, and figured out all the moves except the sequence right off the ledge.

I’d been hoping to also try the less cruxy, but more sustained neighbor, Push 12a, but by the time we’d all taken a beating on Lambda, our extra partner had to go home.  Baby Zu was sleeping soundly, but we were by ourselves and weren’t sure how much longer we had.  So in the interest of avoiding what had happened the previous day, I had Steve traverse over from the top of Lambda and set up a toprope on Push.  That way if Baby Zu woke up upset, I could quickly and safely yard my way up to the top to get our gear back. 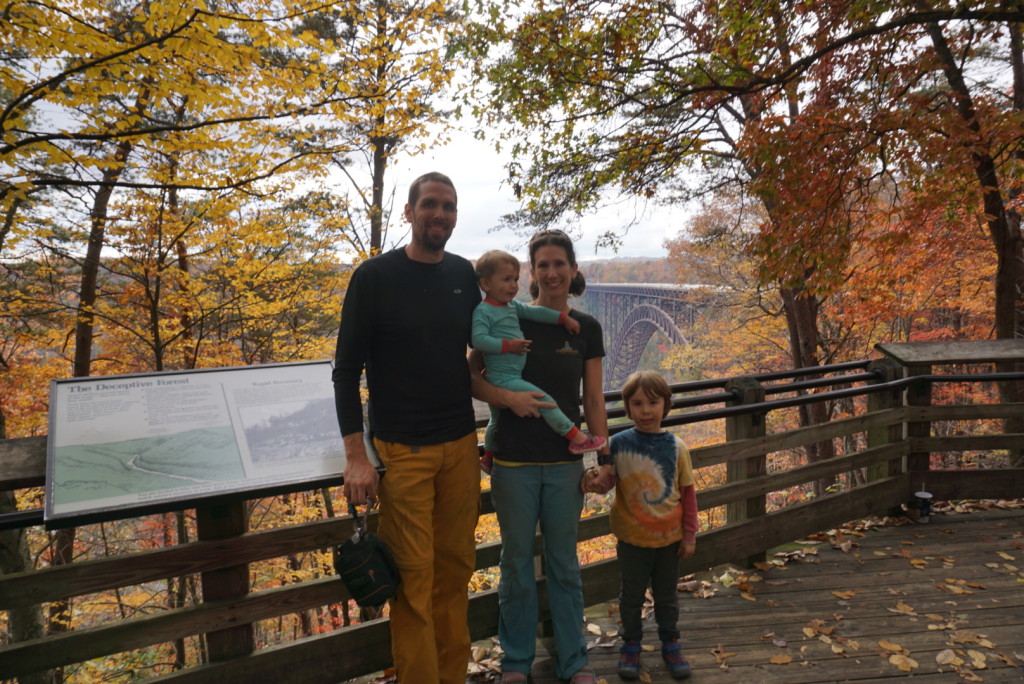 Family photo opp at the overlook

But of course this time she stayed asleep until long after I was finished…go figure!  Once she woke up, we hiked back out.  As a change of pace since we were finished early, we stopped by the Visitor’s Center to ooh and ahh with the other tourists at the Bridge Overlook in all of it’s autumn splendor.  I realized that in all 5 years of his life, Big C had never been to the overlook.  We even brought home a painting of the gorge to put up in our family room.  We are hoping to make it back up once more before it turns cold, but if not, the painting, plus our colorful leaf decorations in the kitchen will be there to remind us of our home away from home during the cold, dark months!