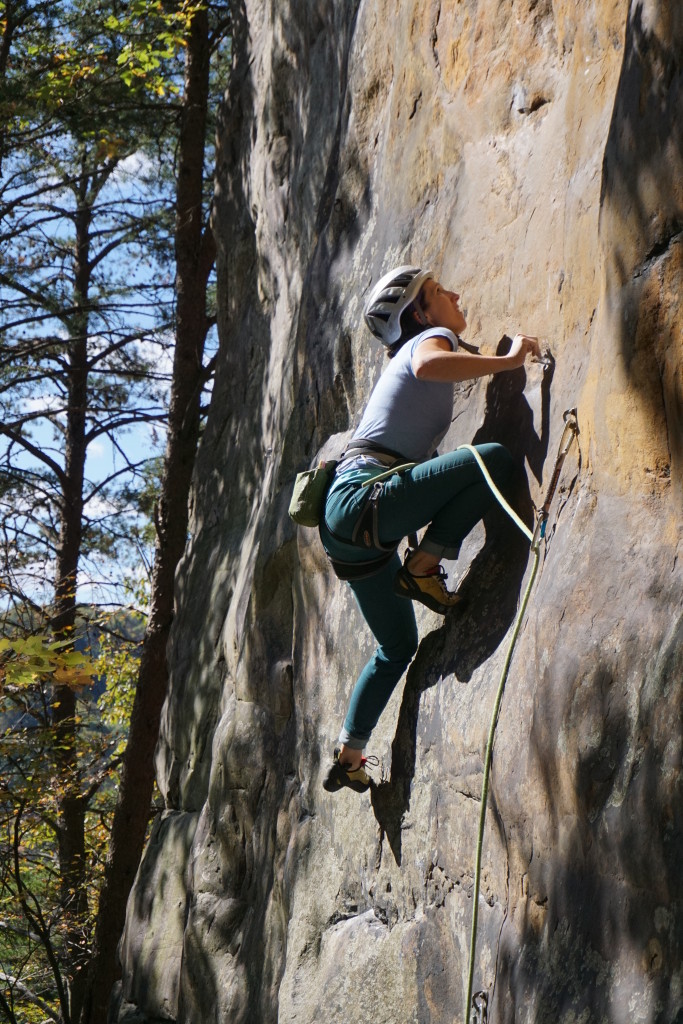 After a month of unseasonably wet and humid conditions, we were starting to think fall climbing season would never get here.  But this past weekend was about as good as it gets, condition-wise.  The air was cold and crisp, but the rock was still warm – one of those magical times where you can climb pretty much wherever you want, without having to chase sun or shade.  In other words, any excuses for not sending are your own fault!

Now when it comes to climbing grades at the New River Gorge, there can be some inconsistency, but the general consensus is that routes at Endless Wall are full value.  There are very few “gimme’s”, and the technical lines almost always feature a combination of the following: long lock-offs, tiny (and often incredibly high) footholds, heinous crimps, and amazing exposure and position.  The sport routes tend to be bolted with a good lead head in mind – you may not have as many as you want,  but usually they are right where you need them (however, botching your beta often means a pretty big ride.)

With all that in mind, it’s no wonder that Endless Wall is often referred to as “Sendless Wall.”  But I love it (usually), and most of my proudest sends have happened there.  So with what was quite possibly the best conditions of the year so far, we headed north to West Virginia on Friday night with an Endless agenda.

Saturday morning was a little chaotic due to Bridge Day shenanigans (when hundreds of adrenaline-junkies hurl themselves off the bridge while thousands of onlookers flock to view the carnage.)  We had to drive the “long way” around, which actually only ended up being about 15-20 minutes out of the way – well worth it to be able to enjoy a warm bed on the South side of the bridge. 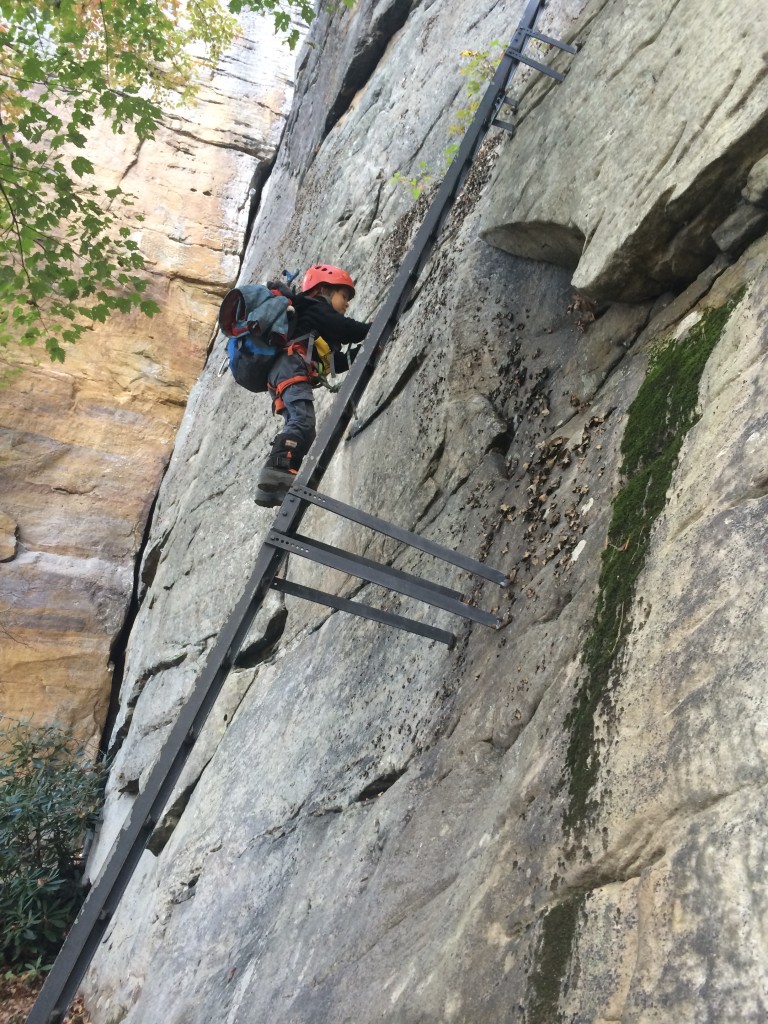 Big C dominating the Honeymooner Ladders on the way out!

My objective for the first day was Techman 12c.  It’s an okay route, but certainly not a classic.  To be honest, the crux traverse is hard in a “not fun” way – it’s sharp, abrasive, reachy, and most of the holds are held together with glue.  But it shares anchors (and an upper crux) with Freaky Stylee 12a, so I started working on it back when CragDaddy was working on Freaky.  Since then I’ve managed a 2-hang, but I was hopeful that Saturday would be the day to piece it all together and nab my first NRG 12c.

I warmed up by pulling through the crux, climbing the more moderate sections of the route, then rehearsing the crux moves on the lower.  A couple of the reach moves are a little low percentage for me because I’m so over-extended, but I got them dialed in better than I ever had before.  My first redpoint attempt of the day got off to a good start – I made it through the heinous crux traverse, but was unable to latch the deadpoint move that came directly after.  The next time it was my turn, however, I botched the crux, again and again, then botched the deadpoint move (again and again.)  My skin was feeling pretty raw so I took a nice long break.  Unfortunately that didn’t seem to help.  I tried two more times and was never able to make it through the traverse without falling.

I was pretty discouraged with the lack of progress…but the icing on the frustration cake was when one by one everyone else sent.  CragDaddy even had an epic battle with the route, almost falling off several times but managing to fight through, which earned him his first ever 12c!  I of course was proud of him…but I’d be lying if I said it didn’t sting just a little. 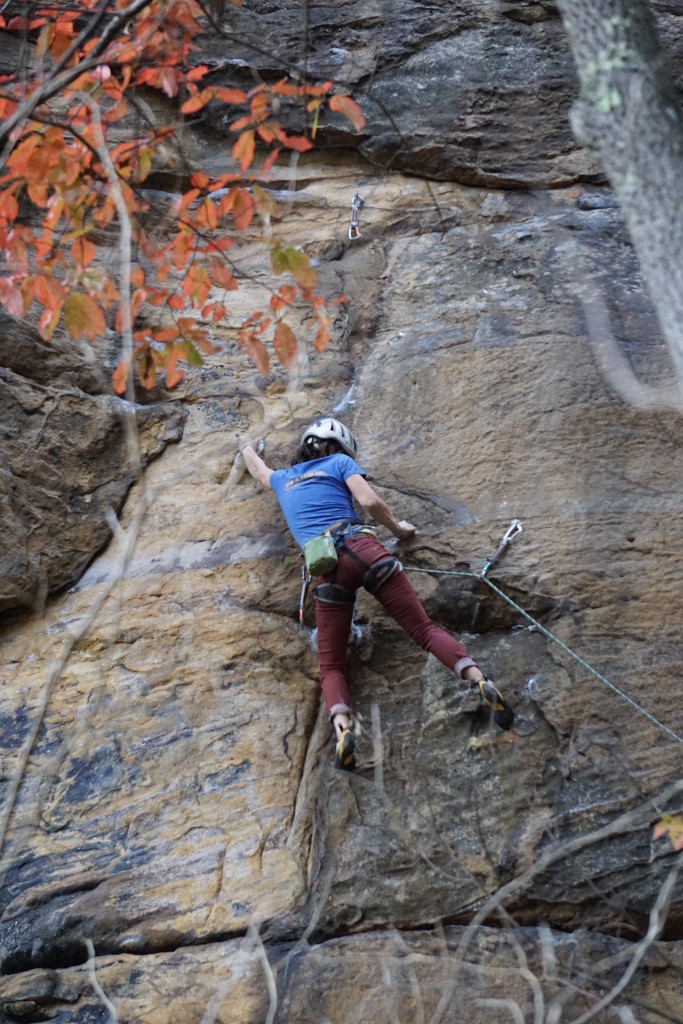 Crux time on Hellbound for Glory 12a

The next day my confidence (and psych) was pretty low.  Although Endless Wall has always been one of my favorite places to climb, I’ve found myself in somewhat of a love/hate relationship with it of late.  While it definitely makes me a better climber when I go to other areas, I get really tired of all the reaches.  It’s really frustrating to struggle hard on moves that my taller climbing partners easily reach past.  I realize that being shorter definitely has its advantages on some routes…but not the ones at Endless Wall (or anywhere at the New, really!)

But enough whining, back to the climbing.  Day 2 we found ourselves at Central Endless.  I took a lovely lap up Strike a Scowl 10a, which in my opinion offers the best view of the gorge.  My friends already had a rope up on Hellbound for Glory 12a…which looked terrifying, so I opted to tackle it next on toprope.

I could have done without the heady, zig-zagging start (traverse 10 feet left, then 10 feet right, step left onto the face, then traverse left 10 feet more.)  But once the route kind of “got going” it was great – technical moves that were surprisingly pumpy, but with pretty good rest stances.  The upper half was a typical Endless slab, with a stay awake move just before going for the anchors.

My toprope run went surprisingly smoothly.  However I wasn’t sure I’d be able to commit to the moves right before the 3rd bolt (a fall there would be a pretty nasty pendulum), so I toproped it again.  Turns out I’d somehow missed a gigantic rail that made the moves I was worried about significantly easier.  I not only climbed that section clean, but the entire rest of the route, earning me the dreaded “toprope send.”  Oops, guess I should’ve led it.  Now I had to do the whole zig-zaggy start again (which ironically felt a lot less sketchy on lead.)  Third go was a charm, and gave me my 7th Endless Wall 5.12.  It wasn’t the tick I’d been planning on walking away with, but a worthy line nonetheless, and I’ll take it for sure.

Despite the emotional ups and downs, there’s no place I’d rather be this time of year than the New River Gorge.  Combine family, friends, and epic climbing conditions and it’s hard to go wrong…and I can’t wait to do it again this weekend!

3 Responses to “NRG Round 1: Endless (Not Sendless) Wall”