Every time our family makes one of our biannual pilgrimages to the Red, we always vow to spend more time there the following year…but somehow we never manage to drive past the New more than twice.  (That being said…2016 is the year!)  But what we lack in quantity we usually make up for in quality, and this year’s Rocktoberfest weekend was no different.

We rolled into town Thursday night with just enough light to make camp, which we set up at the very back corner of the property, as far away from the event shenanigans as possible!  On Friday we split time between Driveby Crag and The Gallery.  Ordinarily crag-hopping isn’t all that easy with little ones involved, but everything at PMRP is so close together that it wasn’t a big deal. 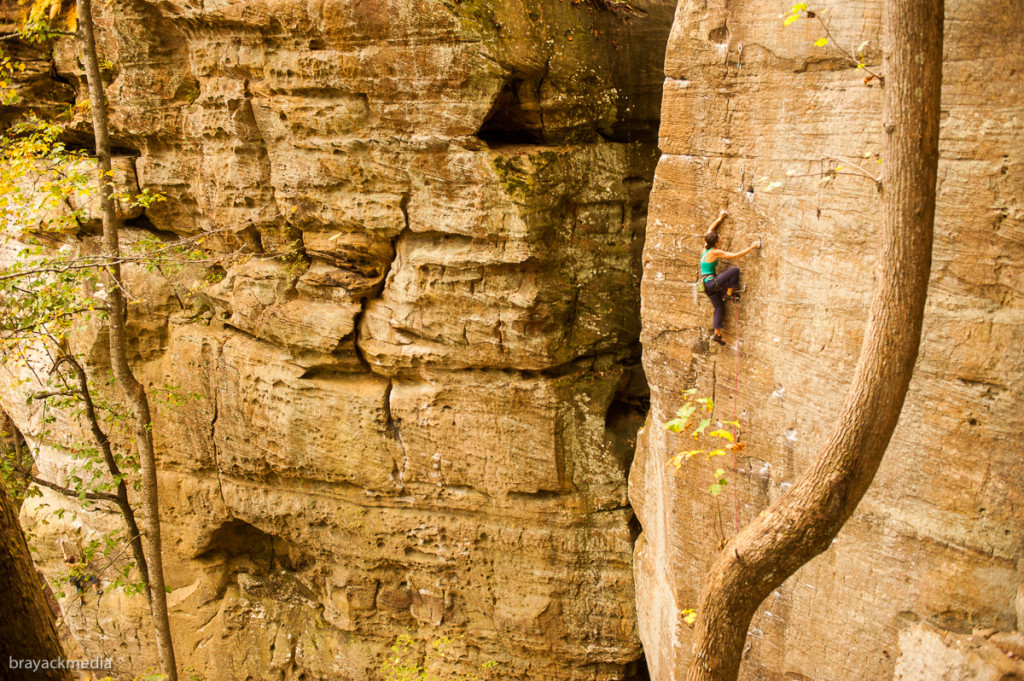 Atypical for the Red, classic all day long! Random Precision 11b.

My goal for the weekend was to grab one 5.12 send amidst the festival chaos and my duties with Trango.  So after a quick warm-up on Make a Wish 10b, I hopped on Check Your Grip 12a.  I did not have high expectations – our climbing plans had gotten rained out the last two weekends, and all that bouldering I’d been doing in the gym to get ready for the (rained out) Hound Ears Bouldering Comp isn’t exactly the best prep for fighting through that RRG pump.  My first attempt was even more dismal than I thought it would be.  Apparently the lack of outdoor climbing rusted up my mental game as well.  There are two sections on the route that are somewhat generously spaced between bolts – a thin, crimpy section, and a burly, sloper section.  I could commit to one, but not the other (and if you know anything about me at all you can probably figure out which was which.)  I then expended A LOT of energy stick-clipping my way through…then proceeded to make the moves first try. 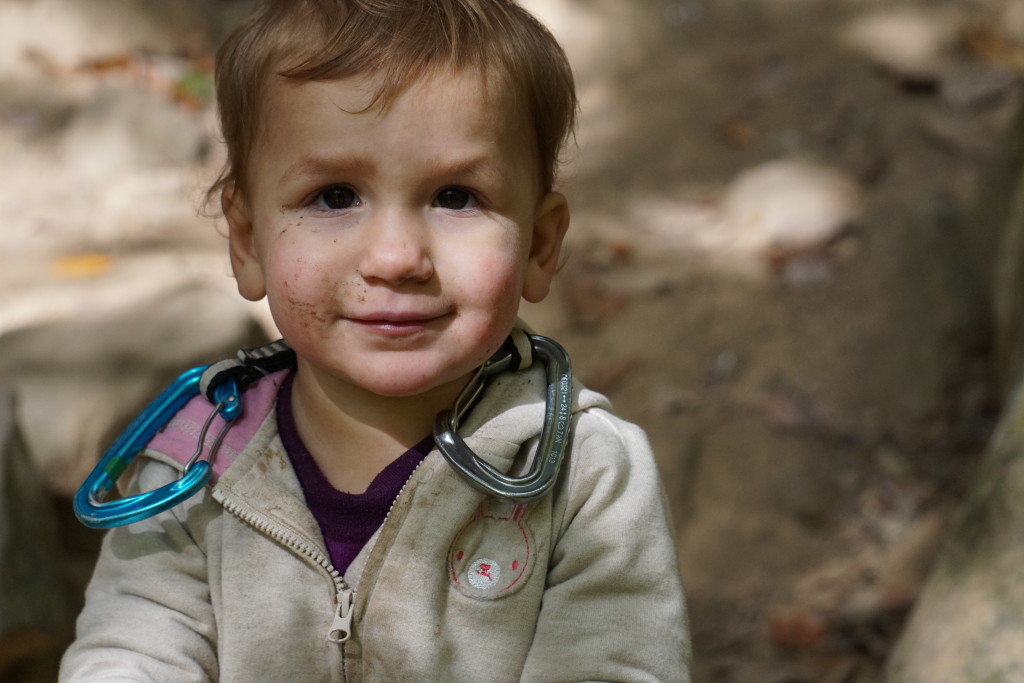 Trango phase draws double as necklaces if you weren’t aware.

In hindsight it was all pretty silly.  While stick-clipping through a hard section definitely has it’s place, it’s not for when the fall is totally clean and you haven’t even given the moves a good try even once!  Afterwards I was pretty frustrated with myself for letting irrational fear get the better of me, but I guess we’ve all been there.

By this point it was time to rendezvous with the rest of Team Trango over at The Gallery for some photos.  While we waited for Random Precision 11b to open up, I hopped on DaVinci’s Left Ear 10b, a fun little romp that was good for the head.  By the time I started up Random Precision, I felt great.  It probably helped that this classic technical route would have been a lot more at home at the New than at the Red.  But regardless, it was awesome, and if you find yourself at PMRP you should definitely hop on it!

I was glad I got on it when I did, as the the thunder roared and the skies opened up shortly after I’d gotten off.  The slab was soaked within a few minutes, but it’s overhanging neighbor to the left (Different Strokes 11c) remained dry as a bone.  This movement on this short, pumptastic route was pretty unique – lots of sidepulling through huecos and sloping pockets.  My forearms were exploding by the top, but I managed to hold on for the onsight. 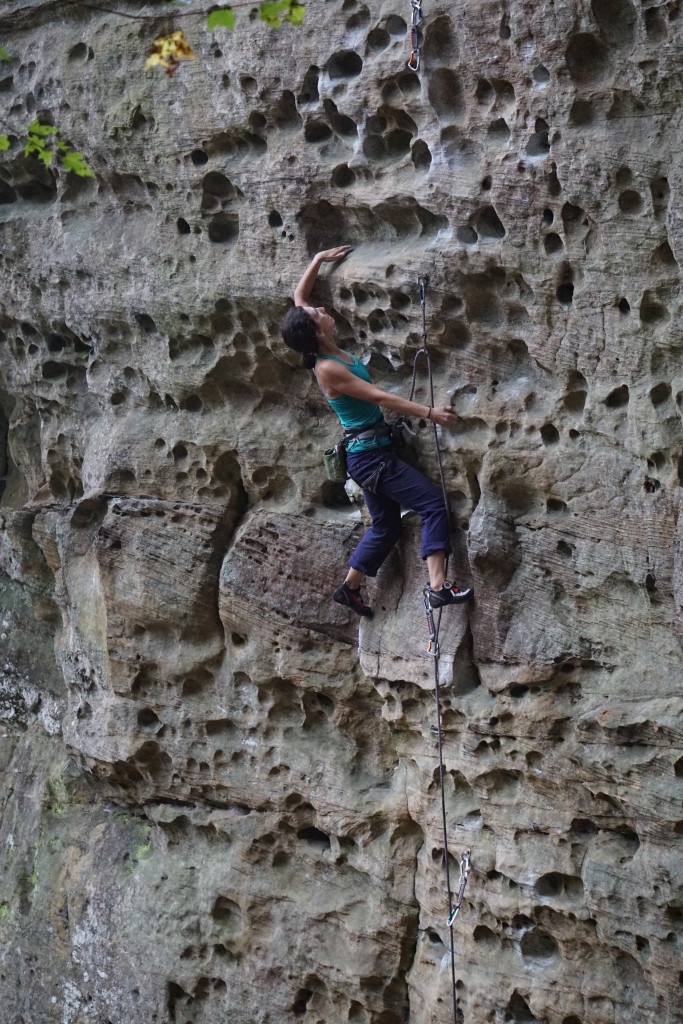 Oops, nothing good up there! Different Strokes 11c

By this point it was time to head back and get our booth set up for the weekend.  The festival kicked off with a showing of Reel Rock 10 Friday evening, and then continued over at Miguel’s the next morning with shoe demos, coffee, and cinnamon buns the size of your face.  Traffic at the table was good and we got a lot of shoes on feet, but by mid-morning we were all ready to climb.  We went back to Driveby, where it was all about redemption for me!  I warmed up on Whipstocking 11a (which is the very definition of fun!), then turned my sights back to Check Your Grip.  On my first attempt of the day my goal was to get to the chains without a stick-clip, which fortunately I was able to do without any trouble this time around.  No falls, but I hung just before and just after where I’d chickened out before, so I wasn’t sure how the upper sections would feel with the pump clock ticking.

With the head issues out of the way, it was time for a redpoint burn.  I left the ground knowing I was going to either send or whip, and thankfully it was the former!  The pump was building, for sure, but manageable.  The rattly kneebar at the top helped seal the deal (FYI if you are tall, the kneebar lets you go hands-free, so definitely don’t pass it up!)

I wrapped up my day on Spirit Fingers 11c, which climbs very similar to Whipstocking, but with a hard crux right off the ledge.

Evening festivities were fun as always – highlights included food trucks (the buffalo chicken dip grilled cheese from Minton’s was AH-mazing!), crate-stacking, bluegrass, and giving a Rock Prodigy Forge Hangboard to the person who hung the longest on the 2-finger pockets.  Unfortunately for us (and our neighbors), Baby Zu decided she’d rather scream than sleep for a large portion of the night.  I exited the tent the next morning afraid to make eye contact, but thankfully no one seemed too perturbed. 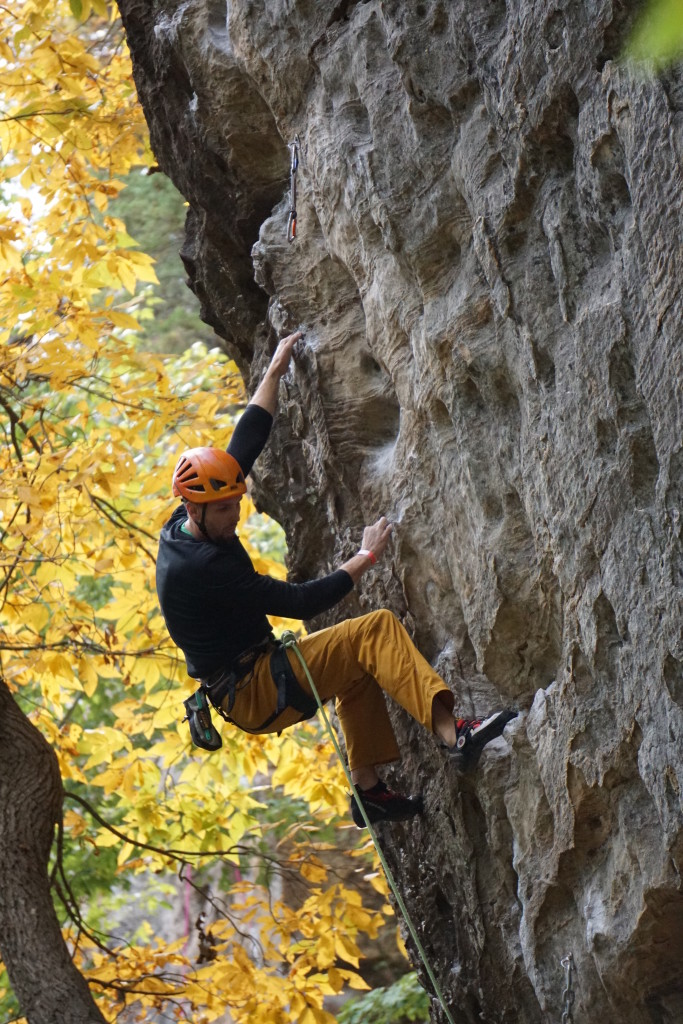 Day 3 was a short one, as we had a long drive ahead of us, and still had to make a stop to pick up Big C (who’d been living it up with the grandparents all weekend.)  We met some friends out at Eastern Sky Bridge, where I warmed up on yet another fantastic line – Super Dario 11a.  I then tied in to Soul Ram 12b.  What an amazing line!  In the interest of time (and the number of times my friend had called for the stick clip), I opted to toprope it.  The line was outrageously good – a bouldery start to gain a relentless face filled with crimps and rounded edges for 80 feet.  Another atypical RRG climb, this time with a rather sandbagged reputation, I was pleased with how it went on my first go.  None of the moves are that hard, but the climbing is very sustained, with bad clipping stances and big runouts for the first several bolts.  I hung a lot down low, but made every sequence first try with the except of a long move to a pocket about halfway up.  Once through that section, the moves are still the same difficulty, but there are just enough good holds sprinkled into the mix to get good rests, and I was able to do the last half of the route clean.

It’s times like these that I wish we lived closer!  Soul Ram is definitely doable for me if I could just get back up there!  Oh well…it’s written in pen on our tick list for next spring (along with Orange Juice 12c, Mercy the Huff 12b, Iniquity 12b, and a whole bunch of other classic lines!)

Who else was at Rocktoberfest?  What were your highlights?  (And who’s in for a spring break trip in 2016?!?)