A lot of people tout that Jesus and Tequila 12b (aka “J ‘n T”) is the best 5.12 in the New River Gorge (and I wouldn’t disagree.)  Some people even argue that it’s the best route in the Gorge, period. I’ve even heard more than one person say it is the best route they have EVER touched.

Well, with that introduction, you know it’s not gonna be a gimme for the grade, right? While grades are of course highly subjective, J ‘n T has a pretty solid consensus that 12b is a big fat sandbag (unless you are my one friend that downgrades everything ;))  12c gets tossed around a lot, and I’ve even  heard 12c/d.  I can’t really weigh in that much, as I don’t have enough mileage at the 12c level to compare, and honestly I don’t really care.  Regardless of grade, it’s exposure, position, rock quality, movement, and overall “badassity” make it a worthy tick for any climber. 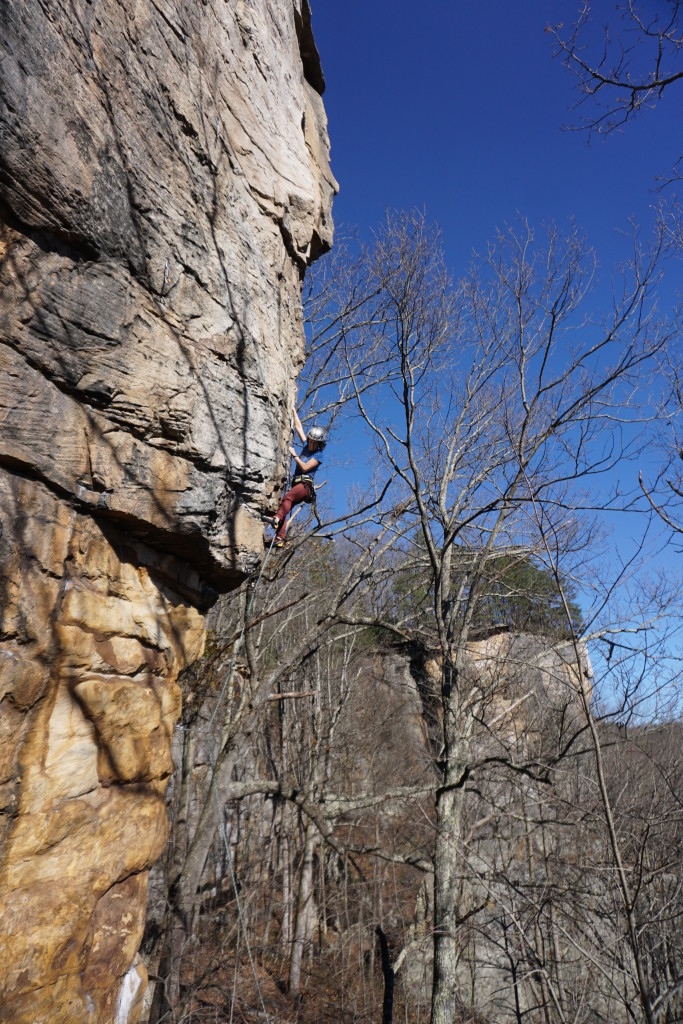 And for me personally it feels far more doable than a lot of other 12b’s I’ve tried, but that probably comes down to the style of climbing.  There are multiple cruxes, but individually none are insanely hard.  It’s the New, so there are of course some long reaches, but they are set up well for shorter climbers (and if anything, the high feet required for some of the moves might actually favor the vertically challenged.)

Although it’s been on my radar ever since I toproped it once a couple of years ago, my recent obsession with J ‘n T actually only began a week and a half ago. After unsuccessfully trying to tick New World Order 12a, I took a few toprope burns on it while my friend was working it.  It was pretty intimidating (hence the toprope), but darned if it didn’t feel like it might go…and soon!  And with that, what was supposed to be our last NRG trip of the season turned into our second to last, and just 6 days later I found myself standing atop the giant boulder at the base of the route once more. 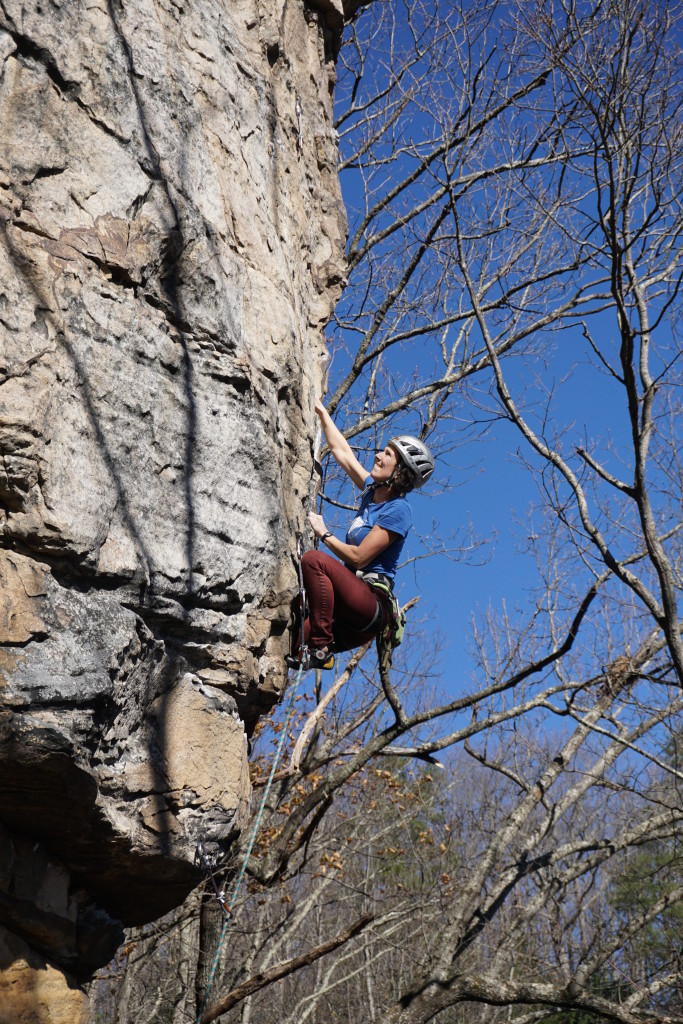 I warmed up by going bolt to bolt.  It did not go well.  The rock was really cold, and the opening moves felt really slippery.  The crux felt scary, and I had a lot of trouble committing to the move.  But eventually I got to the chains.  Considering that performance, I didn’t have my hopes set extremely high for my next go – I would have been happy to get a 1 or a 2 hang out of it.

But you guys! (or ya’ll, if you’ll indulge my southern roots.)  I almost sent it.  I SHOULD have sent it.  (And actually, if the original anchors would have still been in place, I WOULD have sent it.)  It wasn’t pretty.  The first half went well, but i struggled with the heady 5th clip (next time longer draw!), and completely botched my beta for the crux.  I still have no idea how I managed to hang on.  The very next move almost spit me off as well, and the deadpoint up high was not a sure thing.  But miraculously I found myself stemming precariously under the final roof. I took some deep breaths and visualized the final sequence, which involves tiptoe-ing out across a wildly exposed face 80 feet off the deck, grabbing a pair of terrible sloping crimps, and lunging for a pretty good sidepull.  I DID IT!

All that was left was for me to get an awkwardly high left foot onto a point and rock up to a standing position, and the send would be mine.  Now the problem with that foot is that my body is so extended on those terrible sloping holds that I can only lift my foot so high before my butt is too far away from the wall and I lose purchase with my hands.  Going bolt to bolt I’ve always been able to do it, but barely.  However, any time I’ve come in even the slightest bit tired, I’ve had to smear my foot on a lower, much worse hold, then slide it over real quick once my momentum starts moving upward.  It’s more insecure, but it’s always worked…until this time.

I tried at first to get the left foot in the “right” spot.  One, twice, three times.  My toes were scuffing just left of where I needed to be, and I was starting to get pumped.  I needed to retreat back to the dihedral where I could stem and regroup at a no hands stance, but now that my left hand was up above the roof, I couldn’t reverse the move.  The clock was ticking, so I put my foot on the consolation smear and committed my weight to it.  And I slipped off.  Less than 10 feet away from the anchors, after having done every single hard move but one, I slipped off.  I was THERE…and yet I found myself dangling helplessly below the roof, looking up at that blasted foothold that had thwarted my send.

After taking a moment to collect myself, I jugged back up, finishing the route easily in a very awkwardly anti-climactic way.

“That was a great burn, I’m proud of you for going ‘a muerte'” one of my friends said (the same one that downgrades everything.) 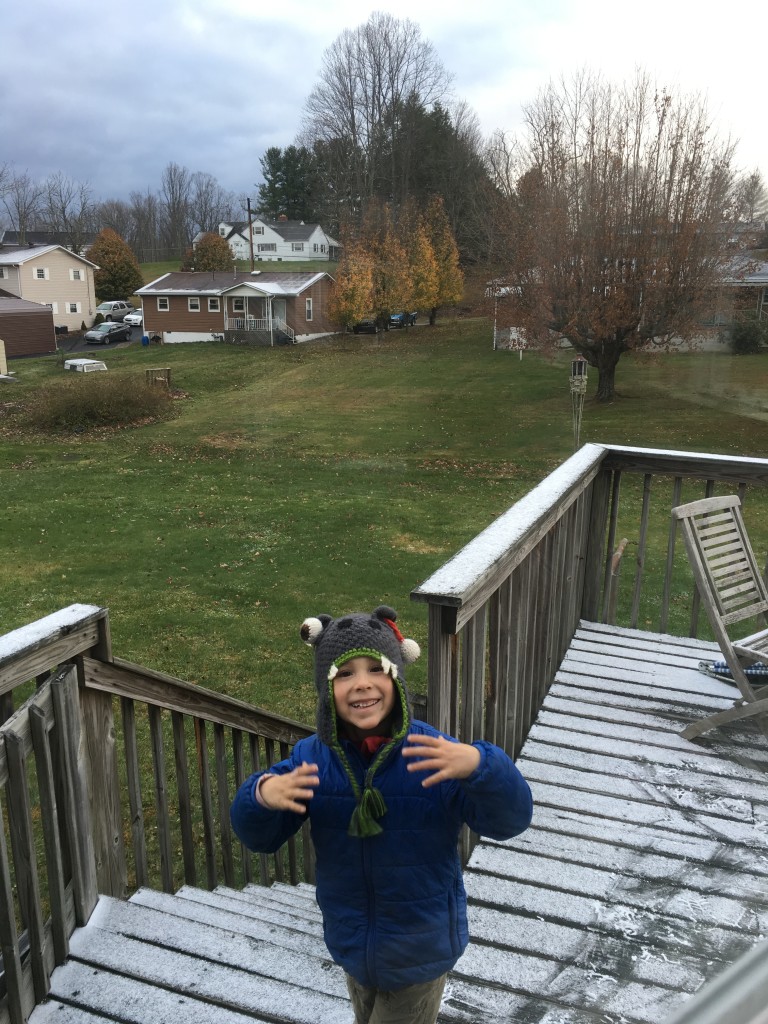 At least one of us was psyched about waking up to snow the next morning.

He was right.  It WAS a great burn, far better than my expectations.  And I WAS proud of myself.  And since we still had a few more hours of daylight I was optimistic that I’d be able to get redemption before the day was out, but on my next attempt I fell at the crux…and by the time I got on it a 4th time I was too exhausted to even get to the crux clean.  The next day featured sub-freezing temps, gray skies, and even some snow flurries, so after exploring around under the bridge, we called it an early day and headed home.

But hey, at least I’m in good company.  The description in the guidebook reads like this:  “Getting pummeled on Jesus and Tequila is a rite of passage for every New River climber…the route used to finish at a station under the final roof, but Jonny Woodward moved it to the top, adding one more insecure crux that has foiled many redpoint efforts.”

In a lot of ways, my performance on Jesus and Tequila pretty much sums up my fall climbing season.  I came back from Ten Sleep with psych that was out the roof, ready to take my east coast game to the next level.  But while I’ve nabbed a few good sends here and there, I feel like I’ve mostly had a lot of almost-sending-but-not-quite-putting-it-all-together moments, which had left me feeling frustrated at climbing, especially at the New.  (#firstworldproblems I know, just trying to be authentic here!)

But all that said, my almost-send of Jesus and Tequila has ended my NRG season on an ironically positive note that makes the entire season feel worthwhile.  I put in a lot of work on routes that have pushed me out of my comfort zone as well as taught me a lot.  Techman, for example, forced me to get creative to maximize my reach, whereas New World Order improved my coordination and agility skills.  Jesus and Tequila boosted my confidence and brought back some of the fight and determination to my climbing that I hadn’t even realized was missing.  And the most encouraging part?  Those routes will still be there 4 months from now, primed and ready to be ticked.  It’s gonna be a fun spring!  But for now, it’s time to get fat and happy with the fam over the holidays.  Happy Turkey Day everyone!