It was an epic day for our family at Stone Mountain last weekend.  Well, for three of us anyway.  We left Baby Zu with the grands, and whisked Big C off to Stone Mountain for his very first day of multipitch climbing.

Up until this point the highest Big C had ever been off the ground was probably somewhere in the neighborhood of 50 feet.  But on a previous trip to Stone Mountain a few weeks ago, he had astonished all of us at how well he had scrambled up the friction slab, and the CragDaddy and I left wishing we could have taken him higher. 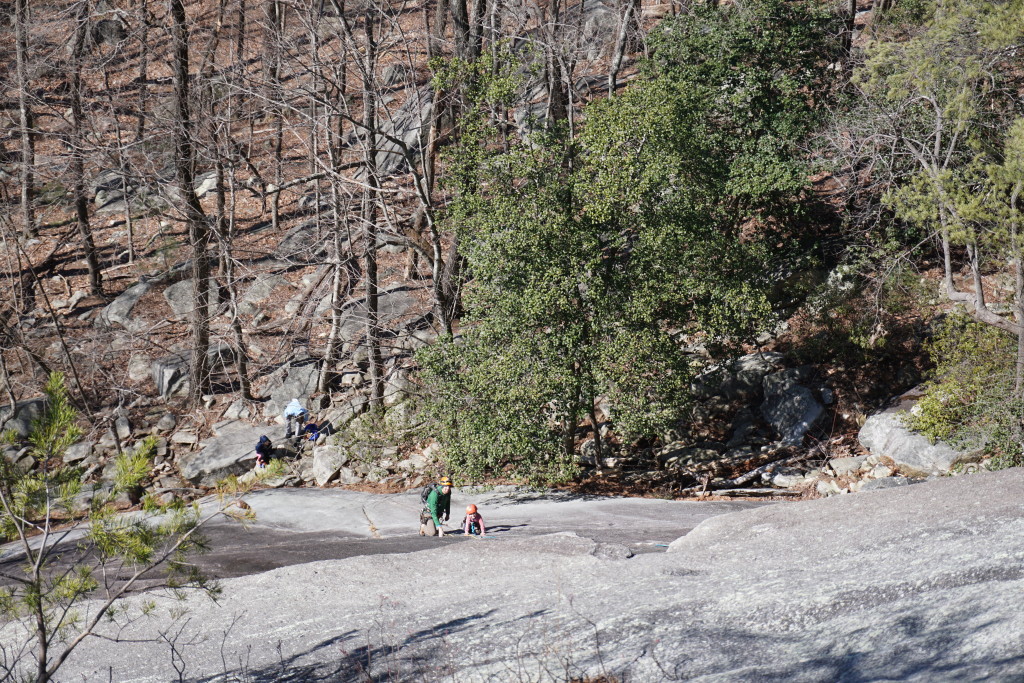 Note for the non-climbers: A “pitch” is a singular stretch of climbing, from one belay spot to the next.  “Single pitch” routes start on the ground and finish at a set of natural or man-made anchors (which may or may not be at the top of the cliff.)  A “multi-pitch” route usually starts from the ground, but upon reaching the anchors, continues up another section of cliff to the next belay station (often atop a natural ledge or other feature), then another section of climbing, and so on and so forth.  Therefore, a route that is 5 pitches long would be climbed in 5 distinct sections, with all climbers in a party finishing one section before continuing on to the next.

Obviously a multipitch scenario where everyone is off the ground at once can’t work when you’ve got a crazy toddler running around at the base of the cliff!  But with Baby Zu spending the day with grandparents, we had Big C all to ourselves, ready to make a summit run together.  We talked through the logistics at length on the way there, including plans for a summit, as well as back up plans in case we had to bail. 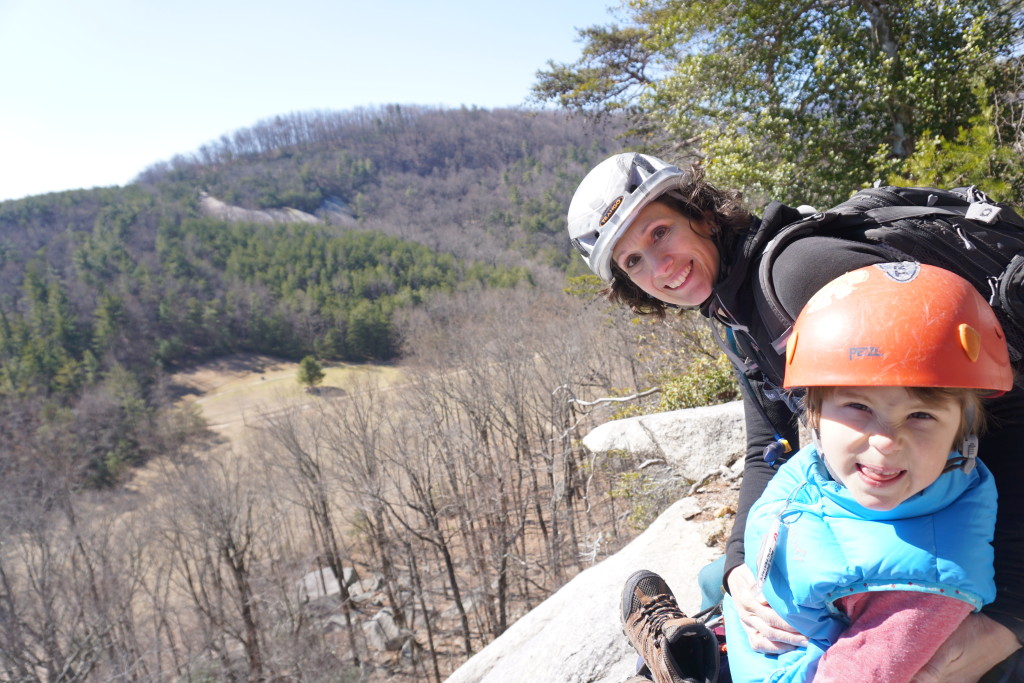 Enjoying the view from the Tree Ledge

Block Route (5.8) seemed like the best and easiest option to get Big C to the Tree Ledge, a giant ledge about 160 feet off the deck.  He had already climbed the first 50 feet to the intermediate anchors without any issues, and there was really only one move that we anticipated he’d have a problem with.   (The namesake “block move” involves flopping one’s self up and over a 5 ft overlap feature, and we didn’t think he’d be able to reach up over the block to pull himself up.  Our plan was for me to lead that pitch on two ropes, clipping both into each piece of gear.  Then I could belay CragDaddy and Big C at the same time as they simul-climbed.  When they got to the block, CragDaddy would just hoist him up and over.

Our plan for the first pitch worked out perfectly.  So far, so good.  We took a break on the Tree Ledge to grab some food and reorganize the gear, as the CragDaddy was going to take the lead on our next pitch (No Alternative 5.4.)  At this point we noticed that the wind was starting to really pick up now that we were higher off the ground.  While I belayed the CragDaddy, Big C huddled in his down vest, asking if it was his turn to climb approximately every 24 seconds. 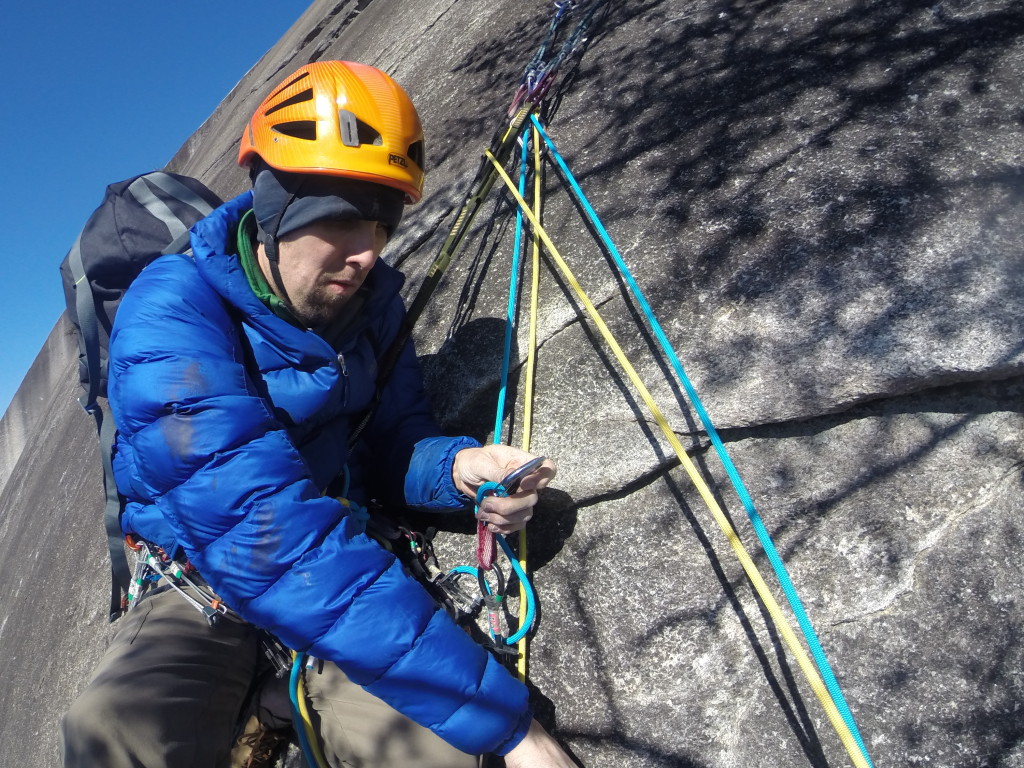 After about a million minutes (according to Big C), the CragDaddy had us on belay and was ready for us to climb on.  The first 50 feet went great…then that’s when our Summit Plan began to fall apart.  There was an encounter with some briars, several ill-timed gusts of wind, and the last straw…3 up close and personal ladybug sightings.  (For reasons I’ll never know, Big C is terrified of running into ladybugs while climbing…which can definitely present a problem this time of year in the South.)

The remainder of that pitch was pretty ugly…as in, at a couple points he was so panicked he was literally frozen in fear. Numerous times I suggested that we lower back to the Tree Ledge and just let Daddy rap down and clean the gear.  But that suggestion was adamantly shot down every time.  (“BUT I WANNA GO TO THE TOOOOOOOOOOOP!!!!!!!!!!!!!)

As a parent, it was really hard to know how to handle it.  It was so sad to see my little boy so frightened, especially by a situation that I HAD PUT HIM IN (even though he had shown us every sign that he was ready, and up until the sudden freak out there had been no red flags.)  And if I’m being completely honest, I was also worried about judgment from other climbers.  It was a beautiful winter climbing day, and there were a lot of people on the mountain, and I was pretty sure most of them were probably at least a little unnerved about hearing a small child screaming 250 feet off the deck.  While on the Tree Ledge, Big C had gotten lots of positive reactions from other climbers passing through…the part of me that cares too much about what other people think of me wondered if those same people were now ready to call CPS. 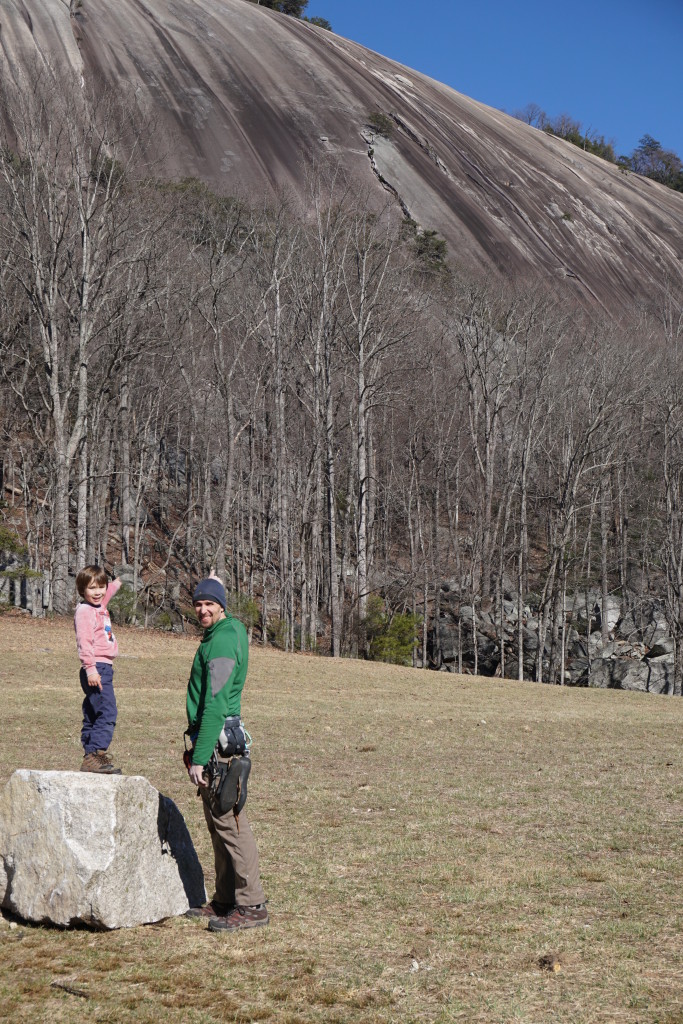 There’s where we were!

But the majority of my efforts, of course, went towards comforting and encouraging my inconsolable son.  Each time Big C had a “moment,” I held him close, we prayed, and I spoke calmly until he gained enough control to let me be his voice of reason.  Over and over we discussed our choices – going up or going down.  And over and over, Big C chose to press on.  After another million minutes (this time according to ME), we finally reached the CragDaddy at the next belay station.

By this time the wind was REALLY starting to whip up.  We had about 300 feet under us, with another 200 or so of significantly easier climbing ahead of us.  We had a family meeting atop the No Alternative flake, and came to a consensus that the best decision was to bail, and leave the summit for another day.

Originally we had all brought our hiking shoes, intending to leisurely walk off the other side of the mountain once we reached the top.  But bailing before the summit was a lot more complicated, and I was glad that we had talked through the possibility beforehand.  It ended up being a lot easier than we’d anticipated – I rapped down first, then CragDaddy and Big C rapped together on an extended rappel using their personal anchors.

Everyone was relieved when we set foot on solid ground.  I was afraid Big C would still be upset, but as we sorted through the gear he quickly went into full crag mode climbing trees and jumping from boulder to boulder.  CragDaddy and I decided to take a lap up Father Knows Best 5.9+, to give him a chance to decompress a bit.

On the hike out, we talked about how it’s okay to be afraid, but sometimes we let our fears get too big.  My own fears about having permanently scarred my child from climbing were alleviated when he asked if we could “try again another day when it’s not so cold and windy.”

So while things didn’t go exactly according to our plans, all’s well that ends well.  He may not have made it to the top, but I’m so proud of my little boy for making it as far as he did and for pushing through his fears.  When we got back down to the meadow at the base, his mind was absolutely blown when we pointed out our high point on the cliff.  I have since overheard him telling at least 3 friends about how he “climbed way higher than even the trees,” with an emphasis of “for real!!!!!”  A fellow climber on a neighboring route contacted us with a picture a friend of his had gotten from the base, and Big C has even requested a copy of it to keep in his room.  And that same fellow climber was also good for my own psyche as well – previously I didn’t know him, but the following day I saw that he posted some very encouraging remarks about seeing our family up there on a Stone Mountain facebook group. 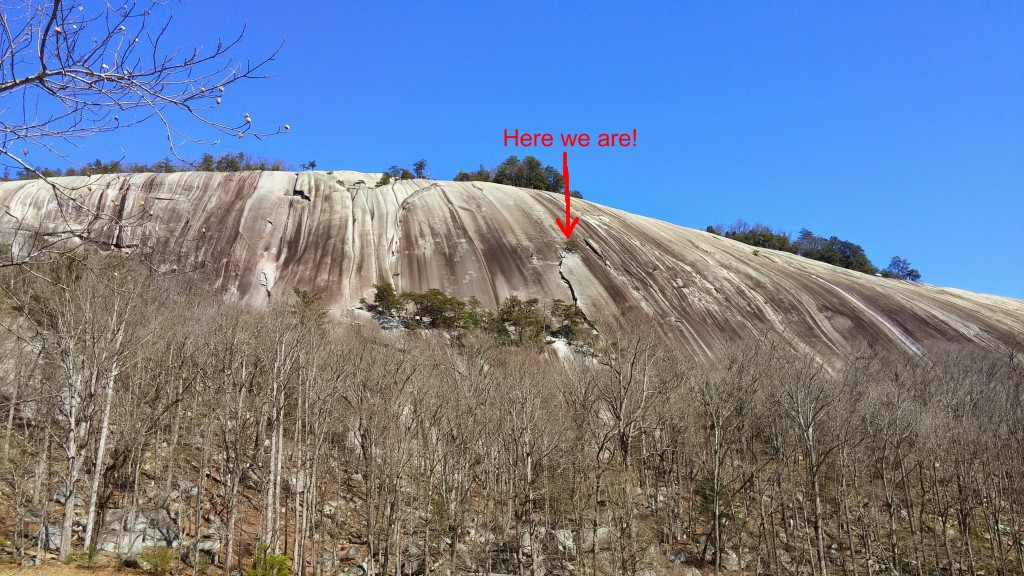 Can you zoom in and find us? (Photo: courtesy Christopher Wittman)

So moral of the story – type 2 fun with kids is stressful!!!  But, I like to think worth it.  It might be a while before we try it again, simply because there were so many logistics involved to make it work.  But in the meantime, it’s almost time for spring climbing season…and CragDaddy and I have an anniversary date to celebrate at Rumbling Bald this weekend!