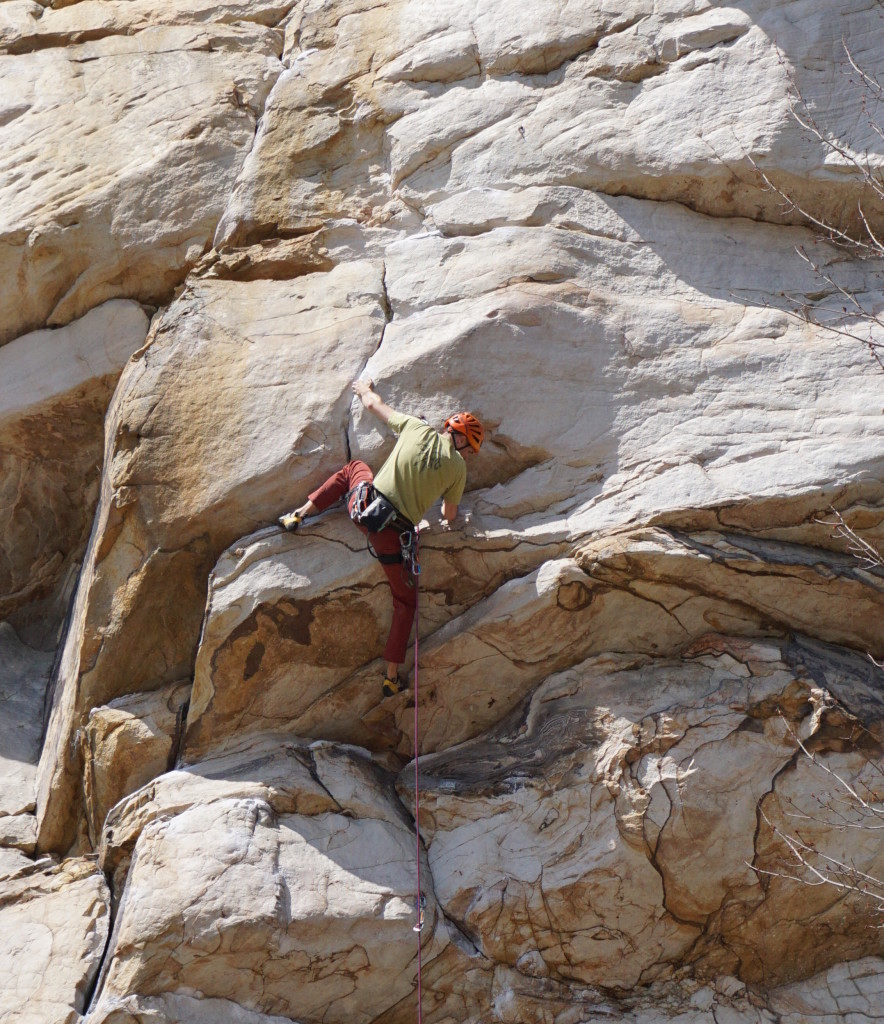 This past weekend represented the official “start” of spring climbing season for us.  The CragDaddy and I both came into the weekend with somewhat mixed emotions.  On the one hand, we were SO PSYCHED about the chance to get back on a rope, back up to the New River Gorge, and start spending our weekend on the rock again.  Ordinarily there are plenty of opportunities to get some climbing in during the winter on clear, calm days at south-facing crags (sun’s out, gun’s out!)  But this winter it seemed like it rained on just about every free weekend we had, and as a family we have been subsequently going nuts…so the opportunity to spend a whole weekend outside in brilliant weather was heavenly!

On the other hand…neither CragDaddy nor myself felt particularly “ready” for a season of sendage.  Last year at this time,  I was just finishing up an RCTM training cycle, and after planning out every detail or every workout for months, I was ready to reap the benefits of my hard work and commitment.  This year…not so much, due to a myriad of random things that have wreaked havoc on our schedule (starting homeschooling and battling walking pneumonia, to name a few.)  While we’ve been getting to the gym consistently 2-3x per week, the actual days/times vary by the week, which makes sticking to a training program difficult.  Not to mention, climbing hasn’t been occupying much of my focus lately with everything that’s been going on. 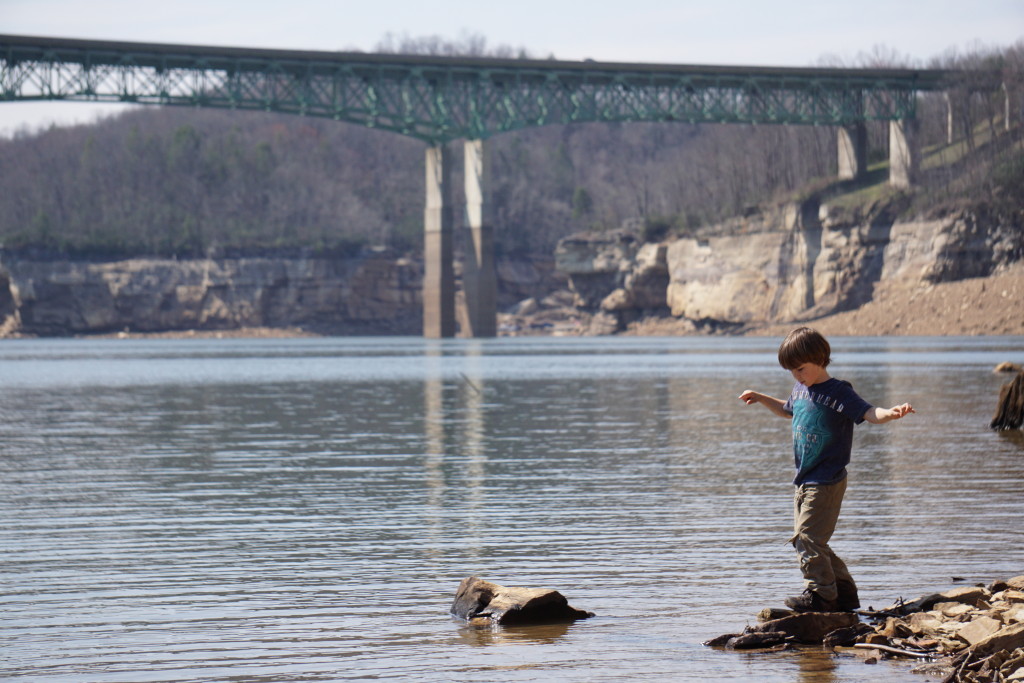 Not a bad backdrop to spend your day in front of…

Needless to say, our performance expectations were NOT very high, to say the least.  My only agenda was to get out and try hard on something that was fun and worth doing.  And it’s a good thing I had a good attitude about it, because aside from one unexpected high note at the end of the trip, I climbed pretty terrible!

These tree stumps (which will be underwater in just a few weeks), are perfect for hiding eggs around, playing house inside, and of course, climbing up!

Our weekend started off at Summersville Lake at the Coliseum.  The warm-ups were fairly promising (Talk About It 10b and Do It 11a), but things started heading downhill on Reckless Abandon 12a.  A classic route with  gorgeous position out over the water, it had been on my list to try for a while.  I scrambled up the opening block, got paired up on some good edges and launched for the first big move…again and again and again.  I just couldn’t make the move.  A few times I actually latched the hold for a split second before peeling off, but never once snagged it…Strike 1.

Next I decided to hop on Tobacco Road 12b, a juggy line that traverses right along sharp(!) jugs to a short but powerful crux sequence pulling onto the headwall.  The clip before the crux proved to be a heinous reach for me, but I finally figured out some beta that involved batting at the draw to get it swinging closer so I could reach it.  I figured out the initial part of the crux relatively quickly, but the last move was a giant toss to a hero bucket hold, and once again, I just couldn’t make the move.  Once again, I latched it for a split second, but never once snagged it.  After just a few tries I lowered off, getting tired of having to boink back up every time I fell.  Apparently the move used to be substantially easier up until recently when an intermediate hold broke off, so too bad I didn’t get on it before!  I’m pretty sure with a little more work I can do it in it’s current state, as it felt far more doable than Reckless for me, but apparently it wasn’t meant to be this weekend! Strike 2.

The next day was spent at Butcher’s Branch, where I set my sights a little lower (or so I thought), on Bicycle Club 11d.  Everyone says this one is easier than it’s 11c neighbor, Sancho Belige, which I’d sent 2nd go a while back, so I was optimistic that I’d be able to put this one down relatively quickly.  But FOR THE THIRD TIME, I tossed for the big move at the 1st bolt (a relatively non-move for my taller partners), and FOR THE THIRD TIME I just couldn’t make the move.  Again and again and again. 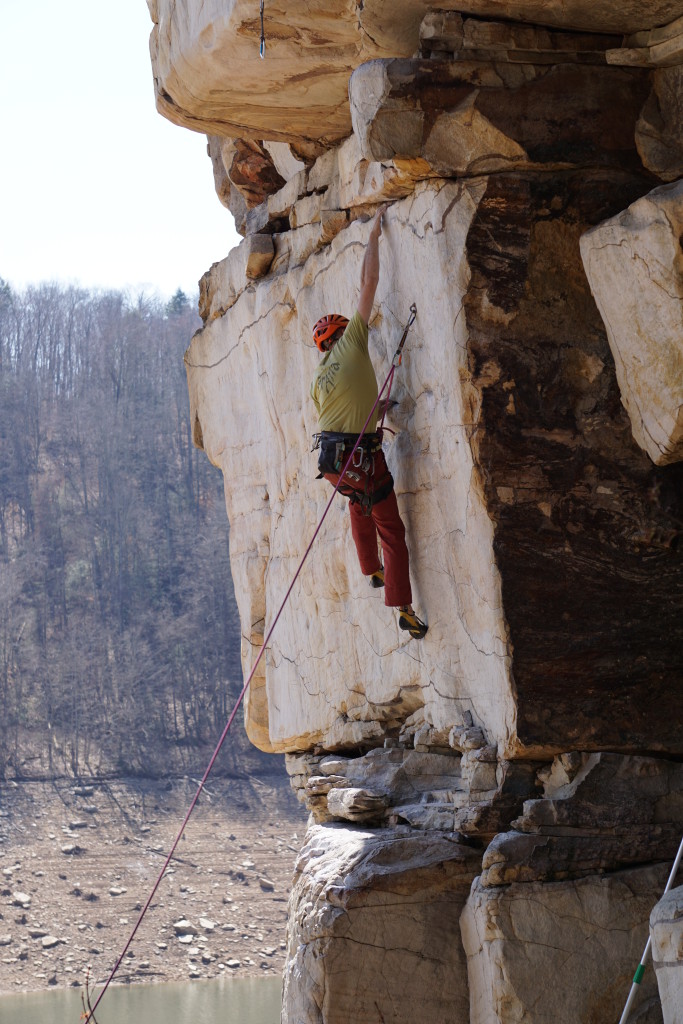 The CragDaddy reaching tall on the Reckless Abandon move that shut me down.

Up until this point I had still been in pretty good spirits despite my dismal performance.  I’ve found that when I am in a season of life that is not as focused on training, I’m not as emotionally invested in the routes I’m doing, and I don’t get as frustrated when things don’t go my way.  But STRIKE 3 did not feel good!  My friend Sam convinced me to try Ministry 12b with him, and since he sent it first go, I opted to toprope it first so I could get his draws back without shenanigans if things didn’t go well (after all, my track record up until this point wasn’t looking good.) 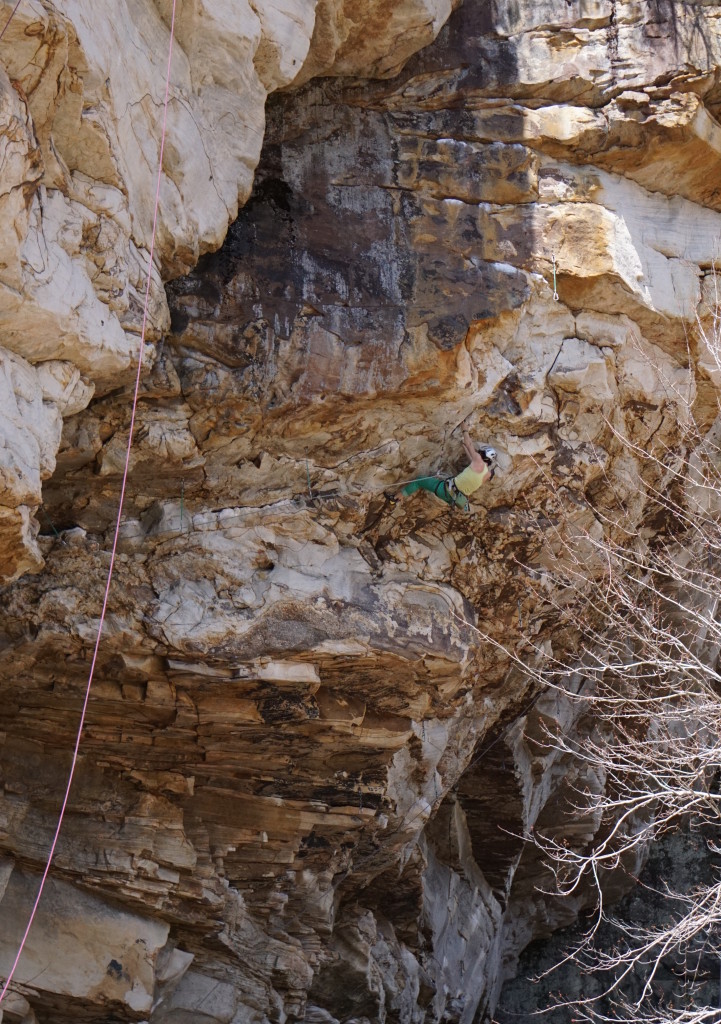 I’d been on Ministry before, a couple of years ago, and had been unable to make it to the top.  It’s basically fun 5.10+ climbing for a handful of bolts, where a crimpy boulder problem awaits at the top.  This time around I surprised myself by figuring out a crux sequence that worked for me, albeit via two pretty terrible rounded crimpers (aka “slimpers.”)  The moves felt pretty darn hard, and I wasn’t at all confident about sending, but I tried again anyway. 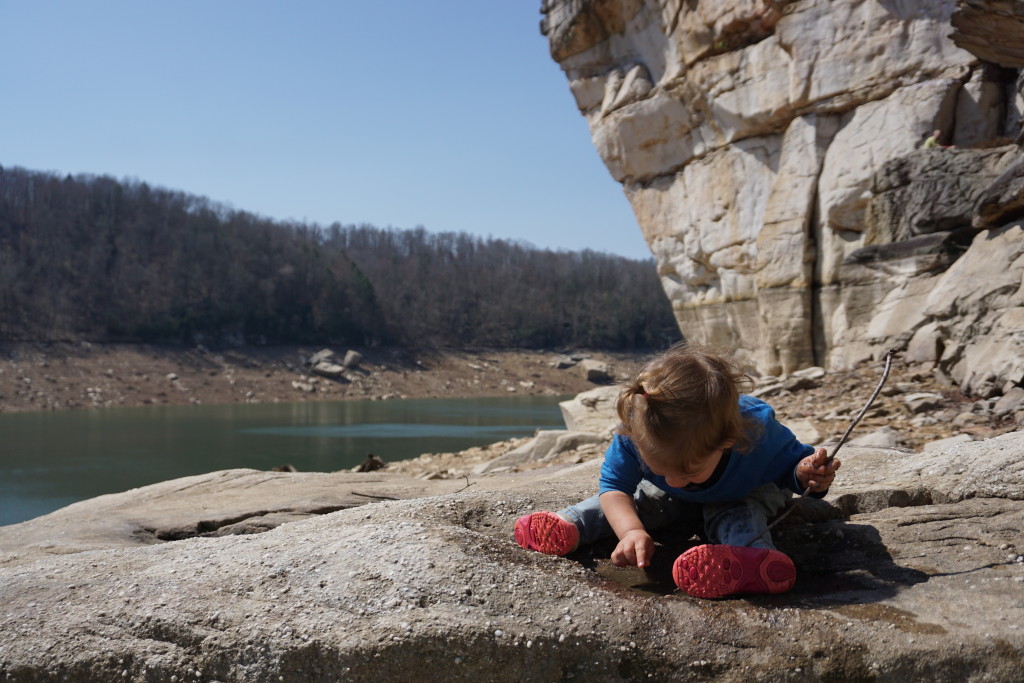 As soon as my right hand hit the first hold of the crux sequence, I felt my attitude shift.  For the first time that weekend, I really wanted it.  It was like something switched on in my brain and I all of a sudden wanted to fight for the send.  Each move felt easier than the last, and before I knew it, I was standing at the chains. 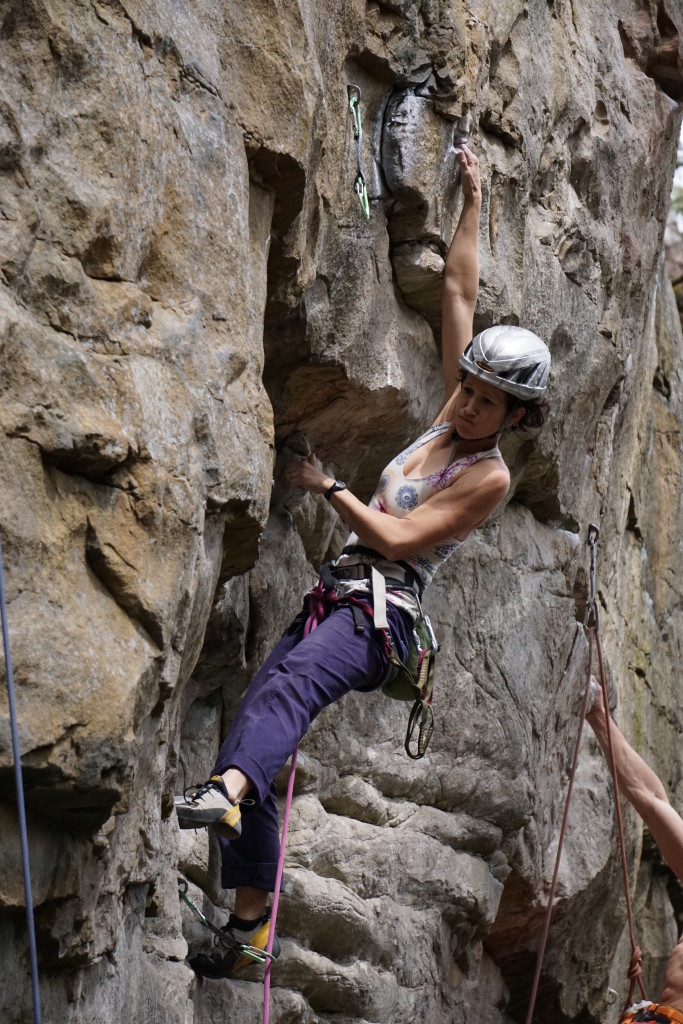 Me going “full blowfish” on Ministry 12b

Emotions are a very curious thing.  The feeling that I get when I am in the heat of a redpoint attempt on a project I’ve poured a lot of myself into is indescribable.  I can ride that high for weeks, and if I could bottle it and sell it, I’d be set for life!  But unfortunately that feeling can be as fleeting as it is strong.  And for me, I have a hard time sending if I don’t want it bad enough.  Perhaps that was part of my problem earlier in the weekend?  Maybe Ministry awakened some psych that had been hibernating over the winter.  Then again maybe I really am just weak and out of shape from the crazy couple of months we’ve just had.  More than likely, it’s a little bit of both.  But either way, I’m looking forward to upping my psych level at the Red River Gorge next week.  Spring has sprung!!!