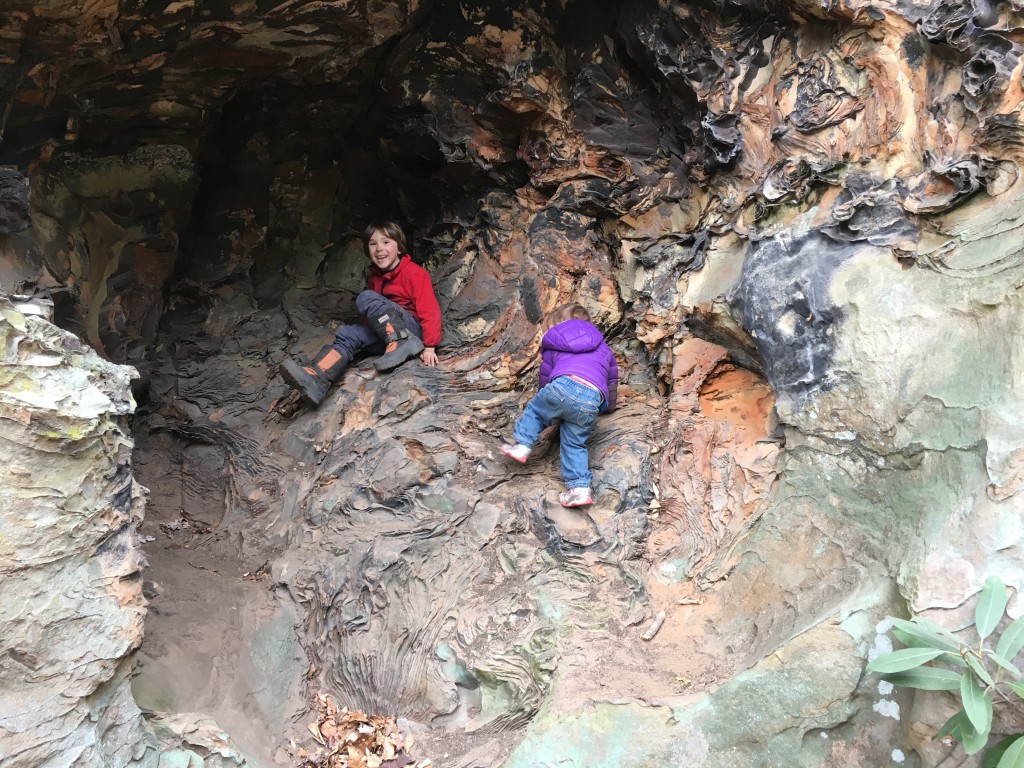 Hueco wackos enjoying themselves out at Left Flank.

When we started planning our spring break trip to the Red a couple of months ago, we decided to reserve a cabin in lieu of camping, just because the weather can be a bit of a toss up this time of year.  Turns out that was a pretty good decision, because 4 days straight of high’s in the 40’s mixed with clouds, rain, and even a little bit of snow is not my idea of fun family camping.  To be perfectly honest, it’s not exactly my idea of fun family climbing either…but we decided to go for it anyway…and I’m really glad we did!

For starters, the weather ended up not being quite as mean as initially forecasted…temps were still pretty low for every day but Sunday (our last day, of course!), but instead of constant precipitation and clouds, we escaped with just a few passing showers and flurries, and just enough sunshine to keep the rock warm.

LEFT FLANK:  Everyone’s objective for the day was Mercy the Huff 12b.  We probably should NOT have warmed up on Fast Food Christians 10a…the slab was cold, and the opening moves were damp and a little tweaky.  Considering the too-little-too-late power endurance I was coming in with, I wasn’t terribly optimistic about the send.  I felt pretty good on the moves, however, and had a good bolt to bolt run on my first attempt.  My second go I came up juuuuust short of the clipping hold at the 4th bolt, but linked clean until there and for several bolts after.  No one else from our crew sent either, but we all agreed it was a good start to the long weekend. 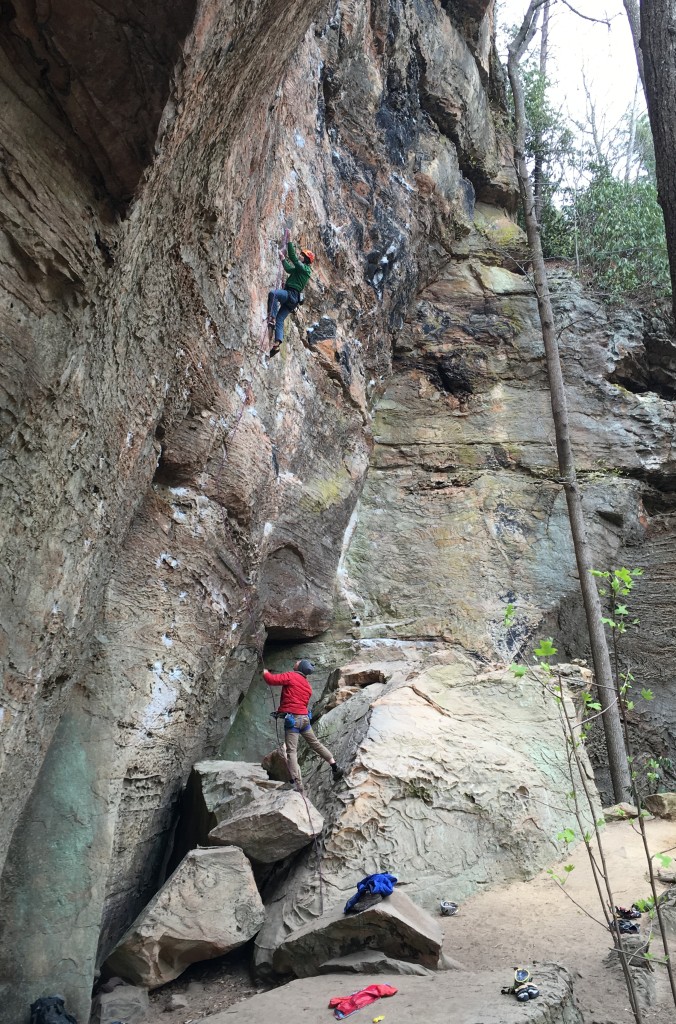 Steve on his way up Mercy the Huff 12b

SOLARIUM:  This place is my new favorite crag in Muir Valley for sure, and possibly in the entire gorge!  Loads of tall, aesthetic lines, most of which are littered with huecos to perch in and enjoy the views (while your forearms slowly deflate back to their original size!)  I started my day out on Air Ride Equipped 11a, which I probably would have enjoyed more had my hands not felt frozen and numb.  Next I hopped on Banshee 11c…and shoulda (coulda woulda) had the onsight, had I not completely missed the fingerlock in the back of the second hueco.  Womp womp.  I pulled the rope and sent it fairly easily second go.

Since the draws were already up, I decided to try my hand on Magnum Opus 12a, a long line that packs a short, but powerful punch at the beginning.  I figured out the crux beta fairly quickly, but I think putting it together would have taken more time than I wanted to spend at a new area. 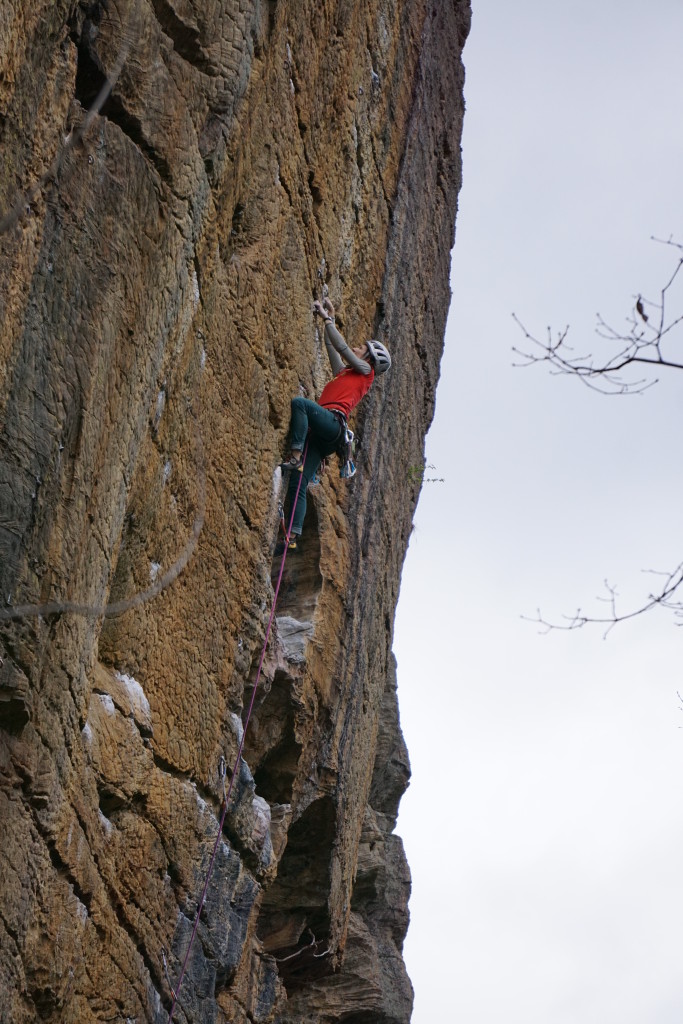 Enjoying the jugland on the upper section of Banshee 11c

With temps not getting out of the 30’s until late in the day, and 15-20 mph winds in cloudy skies, our family decided a rest day might be in order.  We stopped by to hang out with a fellow climbing family that had coincidentally arrived on an extended 3 month trip just days before, and then in the afternoon Big C and I went to the Kentucky Reptile Zoo as part of the Snake Study we are doing in his homeschooling right now.  I can’t say enough how cool this place was – first off, it has one of the largest collections of venomous snakes in the entire world.  We got a very personalized tour of all of their snakes on exhibit, and even got to watch some angry cobras getting their venom extracted!  My little nature geek was in heaven. 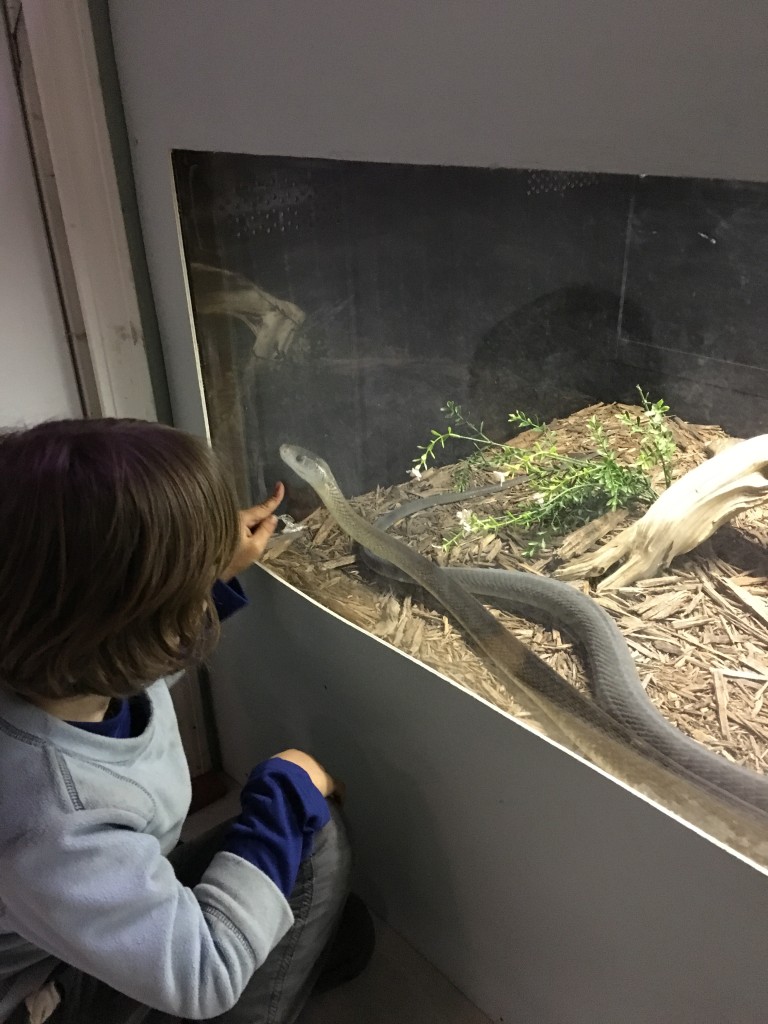 We rounded out our day on a scouting hike to Funk Rock City, to check out Orange Juice 12c, a route that has been on my bucket list to try since I first laid eyes on it in 2012.  Unlike many routes at the Red, this one does NOT do well in the rain, and the forecast had kept us away until this point.  Also, the hike is long, and includes a stream crossing which can be a little temperamental depending on water levels.  We thought a rest day was a good chance to see how 6 year old legs would handle both the hike and the stream.  He crossed the stream like a champ (except for when he came back to “help Mommy” and fell in…), but the hike was still a 45 minute slog one way.  That combined with the fact that it was 30 minutes from our cabin in the OPPOSITE direction from our house meant it was not ideal for our last day when we have a 7 hour drive ahead of us.  So OJ got put on the backburner…again.  One of these days I’ll get to it. 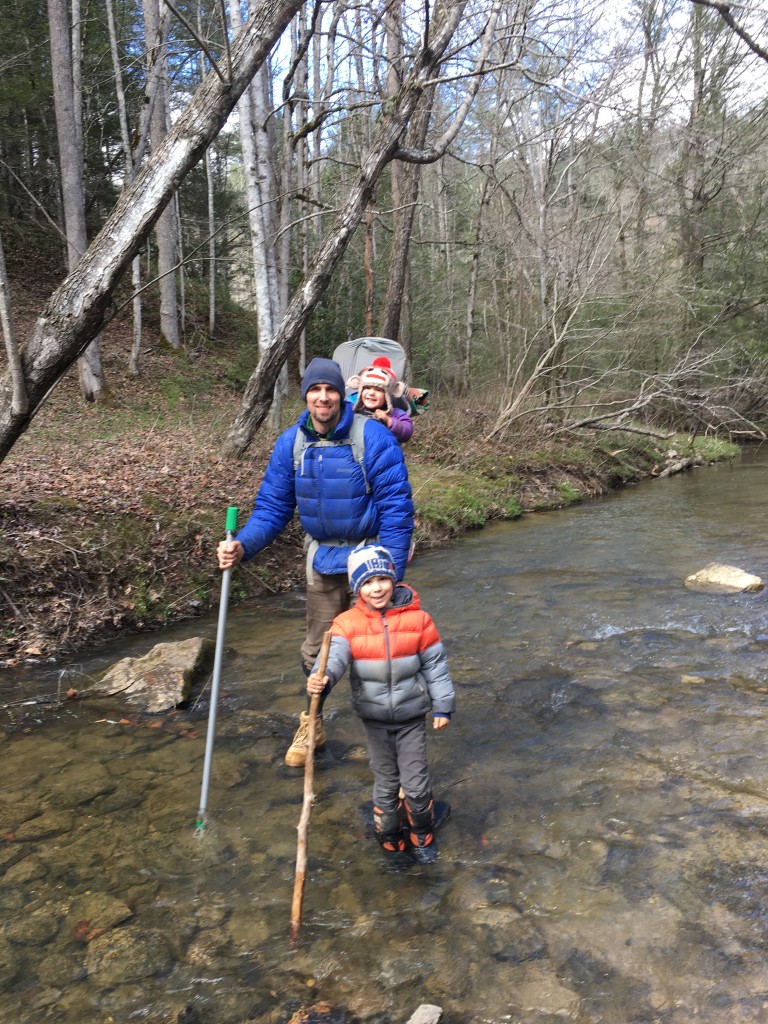 SOLARIUM/GREAT ARCH:  Instead, we opted for Muir Valley again…it was half the hike, and on the way out.  Plus we’d had so much fun there the previous day!  This time I warmed up on Black Powder 10b, a rather non-descript line with a couple of surprisingly burly moves down low.

The CragDaddy had his sights set on Beef Stick 12a, and his hard work earned him his second ever 5.12 onsight!  He lowered pronouncing it “reachy, but I think you’ll be able to get your feet up.”  I figured I had nothing to lose so I tied in.  It WAS reachy…but I WAS able to get my feet up, and I was very psyched to nab the flash!  The climbing was very odd, and very un-Red like (which is probably why Steve and I both did so well on it…)  There were 3 distinct cruxes, each separated by pretty good rests, and all involving some sort of scrappy rockover/mantle maneuver.  The moves were a lot more committing than they were hard. 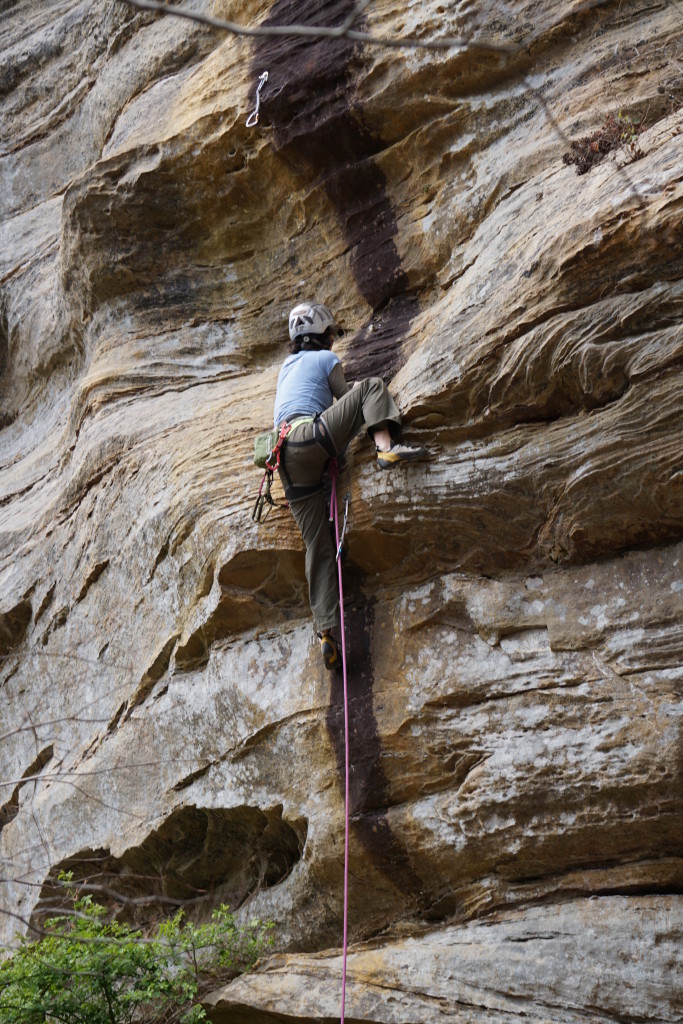 High-stepping along the black streak of Beef Stick 12a.

I ended my day on something I should have tried far earlier – Galunlati 12b.  What a fantastic line – technical face climbing on terrain that doesn’t feel very steep until you lower off and see how far back you are.  I regrettably only got one crack at it, and after taking 10 minutes to hang the 4th draw (darn those reachy clips!), realized that another flash was not in the cards for the day.  Had I gotten on it on our first Solarium day (as opposed to Magnum Opus), I’m pretty sure I would have been able to link it 2nd or 3rd go, but I guess it’ll have to wait for the next trip.

Speaking of next trips…usually we only make it to the Red twice a year – once in spring and once in fall.  But the kiddos have been doing great in the car recently so we may (fingers crossed!) be able to eek out one more Red trip in early May (hopefully before the weather gets too hot!)  Next weekend though, it’s back to the NRG, where I am hoping the weather will cooperate long enough for me to excise my revenge on Jesus and Tequila!!!

2 Responses to “Spring(?!?) Break at the Red River Gorge”