“Some weekends everything falls together and you send.  Other times you work your ass off and walk away empty-handed.  But those “work” weekends are what make the “sending” weekends so magical.”

Those were my words exactly one month ago, after a hard-fought battle with Jesus and Tequila 12b, one of my (many) unsent projects from the New River Gorge last fall.  The “moral” of that post was that investing hard work into a project will EVENTUALLY reap successful dividends, even if you currently have nothing “on paper” to show for it.  That particular weekend was a “work” weekend.  So was the next one, this time on a new project at Hawksbill Mountain.  Both trips sparked a flurry of training in the gym – 4X4’s, roped intervals, core workouts, etc.  All in preparation for one of those “sending” weekends at some point down the road… 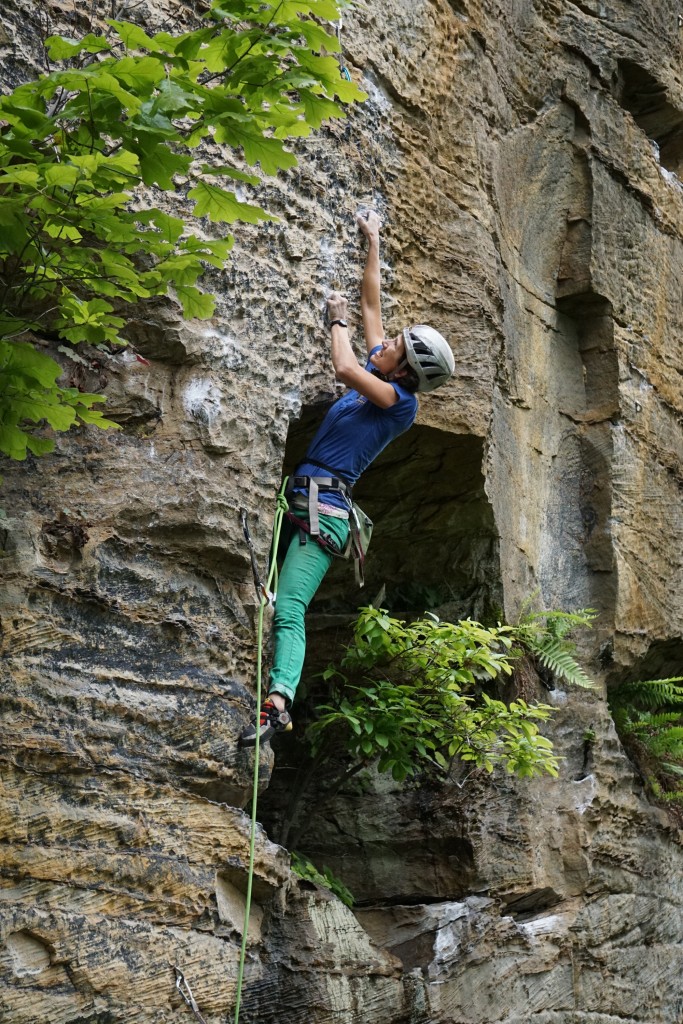 Creeping out of the hueco on Mirage 12c

…which apparently was this past weekend at the Red!  I’m not sure whether it was the training, the SPECTACULAR spring weather conditions, or just a little bit of luck falling in my favor (probably a combination of the 3), but I just enjoyed what was probably one of my strongest climbing weekends ever…and days later I’m still finding my lips poised in a perma-grin. 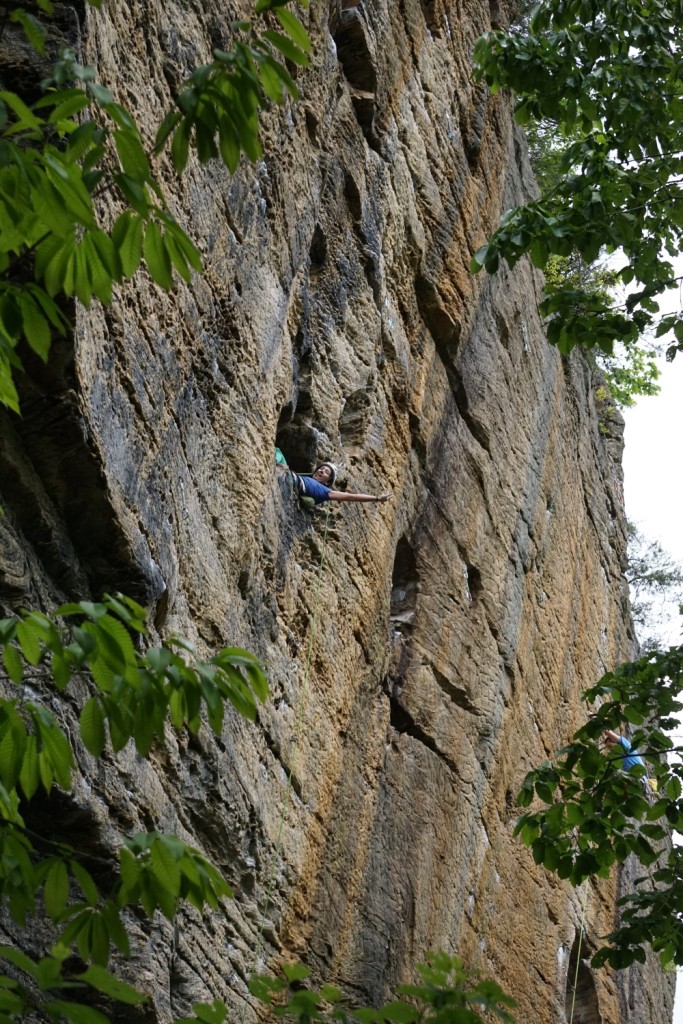 70 feet down, 30 to go! Trying to deflate my forearms in the upper hueco on Mirage.

I drove up to Kentucky with one goal in mind: Galunlati 12b, a route I’d gotten on at the very end of our trip there this past April.  I drove home on Sunday with THREE 5.12 ticks, one of which very well might be the hardest route I’ve ever sent.  Here’s how it all went down: 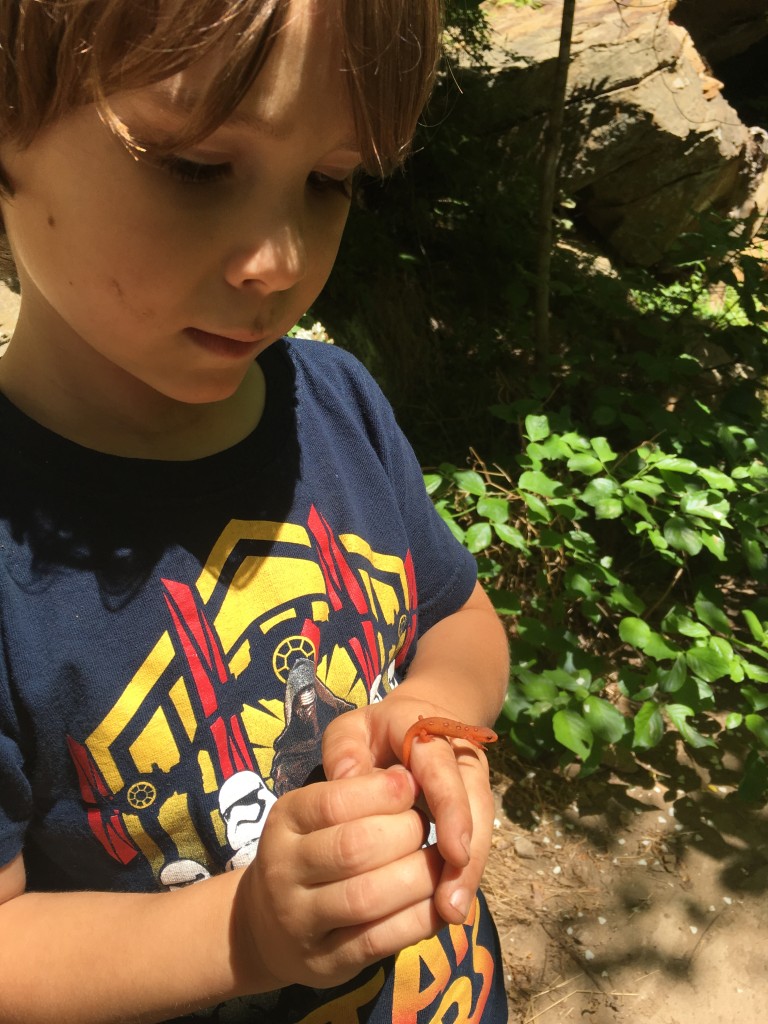 Galunlati 12b:  95 feet of awesomeness.  Tricky, technical crux down low, with a pumpy traverse on crimps halfway up.  No huecos to hop in, but I did find a decent kneebar to rest up before the last 30 feet of 5.10 jugs.  To save time, (at a premium with 4 climbers and two kids), I warmed up by going bolt to bolt…and it did NOT go well, probably because I should NOT be warming up on 5.12.  But I got the draws in and got to rehearse my beta.  Second go the crux felt way easier, but I botched the end of the traverse and fell.  I figured out a better sequence, and my third go was the charm (and send.)

Mirage 12c: 95 feet of even more awesomeness.  I’d wrapped up Galunlati with enough time to do one more route on Day 1, and my friend Bennett had suggested this one.  He’d just sent, and I figured I had nothing to lose since the draws were still up.  The climbing turns on at the 2nd bolt while exiting a big hueco, and does not relent until the 5th bolt.  The moves out of the hueco are precarious and balancy, and the bolt is a lot lower than you’d like it to be, which makes for an exciting combo rather low to the ground.  In fact, my first time up, I actually climbed with the 3rd bolt already clipped so I could work out the moves fear-free.  The next moves are equally tenuous, as well as the next clip.  The crux comes next, between bolts 4 and 5, a deadpoint move to the first decent-sized hold in about 20 feet.  After that, a few more pulls on small, but positive holds leads into a hueco you can lay down in.  The climbing post-hueco is a lot easier – probably no harder than 10a/b, but the angle is still pretty darn steep, and the route keeps going for another 30-40 feet or so.  I was super stoked to get to the top, and very excited to add this one to my tick list for the fall season. 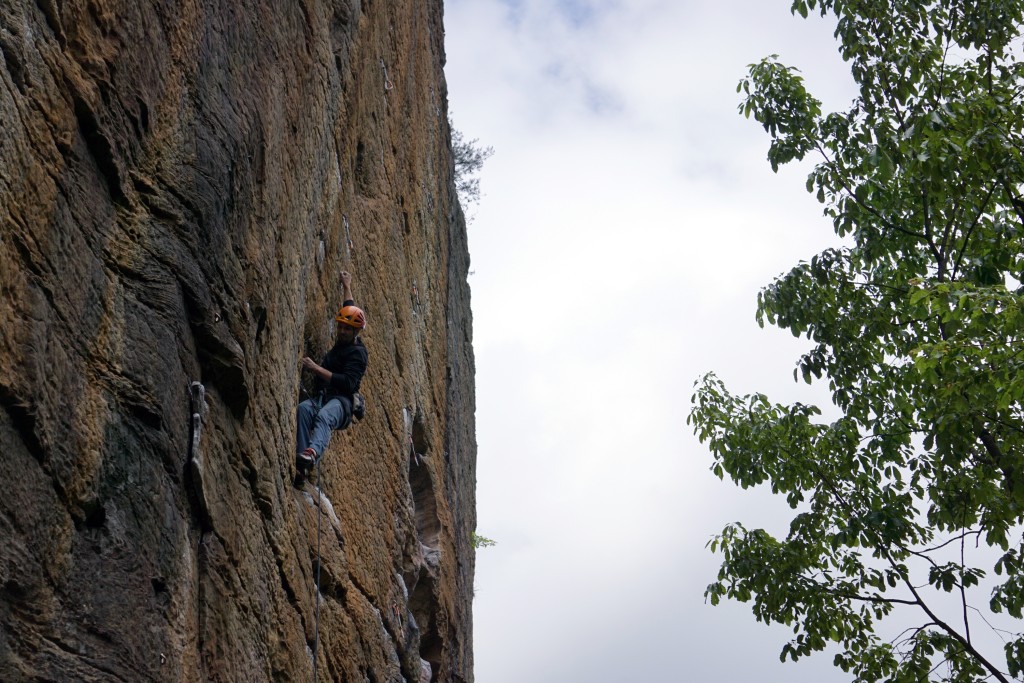 The CragDaddy getting oh-so-close on Abiyoyo 12b

But as luck would have it, our crew ended up back at the Solarium again on Day 2.  Since my “warm up on the project” strategy had been successful the day before, I decided to stick with that.  I struggled on the deadpoint move.  There are a lot of ways to do it, but each seemed ridiculously hard to do when I was pumped, as I most certainly would be on a redpoint run.  I worked the moves for a while until I had to come down out of sheer exhaustion. 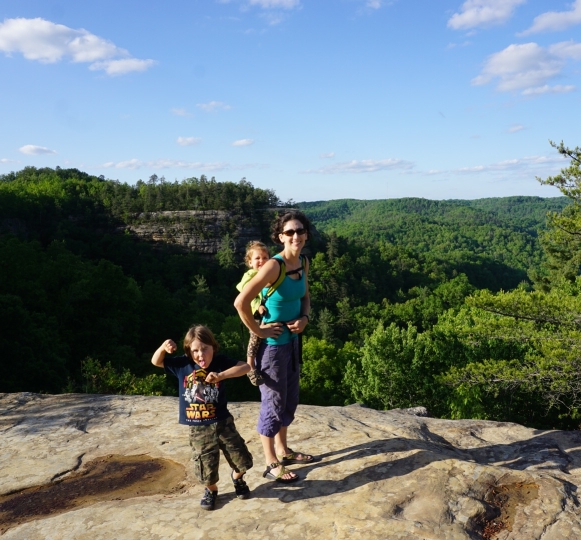 A post-dinner hike to the Natural Arch

I wasn’t feeling that optimistic for a send on my 2nd go of the day…I knew I could do the moves, but stringing them all together seemed like an impossible feat.  Not to mention that scary clip at bolt 3.  But I tried hard, and actually didn’t fall until the deadpoint move.  I hung, tweaked the beta, and took it to the top.

I waited a good long time before trying it again, cheering on the CragDaddy as he worked Abiyoyo 12b, and sprayed (solicited) beta at our newfound friends from Colorado as they took their turns on Mirage.  When I tied in again, I wasn’t at all confident that I’d even have enough gas to make it to my previous high point.  But before I knew it, I was there…and this time I executed my beta correctly and latched the deadpoint!  I came really close to punting off in the next section, but somehow managed to slide into the hueco with forearms flaming.

I stayed in the hueco until my neck just couldn’t take it anymore…then I moved up into the kneebar to shake out a little more.  The finish was not desperate, but it certainly wasn’t a sure thing.  The pump clock was ticking faster and faster but I just kept moving as fast as I could until both chains were clipped.  YAY!!!!!!!!!!!  An unbelievably amazing (and unexpected!) send for me! 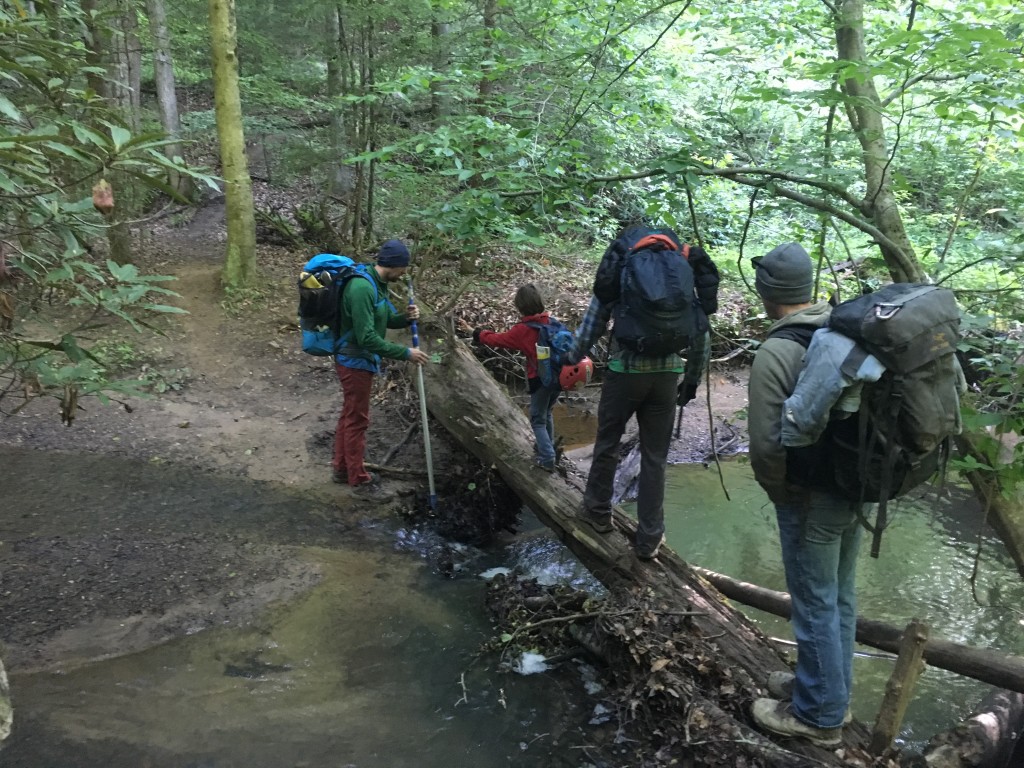 Crossing the creek at Miller Fork.

On our last day, we decided to check out Miller Fork, a new-ish area that has recently come out with a new guidebook.  It was fun to try a new place, and the routes we got on were good…but the rock quality seemed inconsistent.  The routes we did were all great, but will probably be even better in a few years after more traffic cleans them up a bit.

Weird Science 12a:  This vertical climb was perfect for Day 3 – thin boulder problem down low to moderate climbing.  Very un-Red like (ie, no guns required, just technique), but the neon orange lichen only visible from the top made it worth the effort.

Witness the Citrus 11c:  Also worth mentioning was this monster of a climb.  100+ feet of pure jug haulin’ fun!  Definitely 5 stars!

Climbing can be a very fickle sport.  I’ve learned that having the physical and mental fitness for a certain route is really only a small piece of the puzzle to success.  Sometimes the real crux is having that perfect weather window occur on the days you are actually free to climb, rather than days you are stuck in the office/house/etc.  (And finding someone else that wants to climb at the same area you want to climb at!)  Fortunately for me, all the stars aligned and everything worked in my favor this time.  And with imminent summer heat and humidity on the way, I’m going to savor every minute of this “sending feast” while I still can, knowing the famine is just around the corner!  (And, right on cue, the forecast for THIS Saturday looks pretty dismal…)  😉 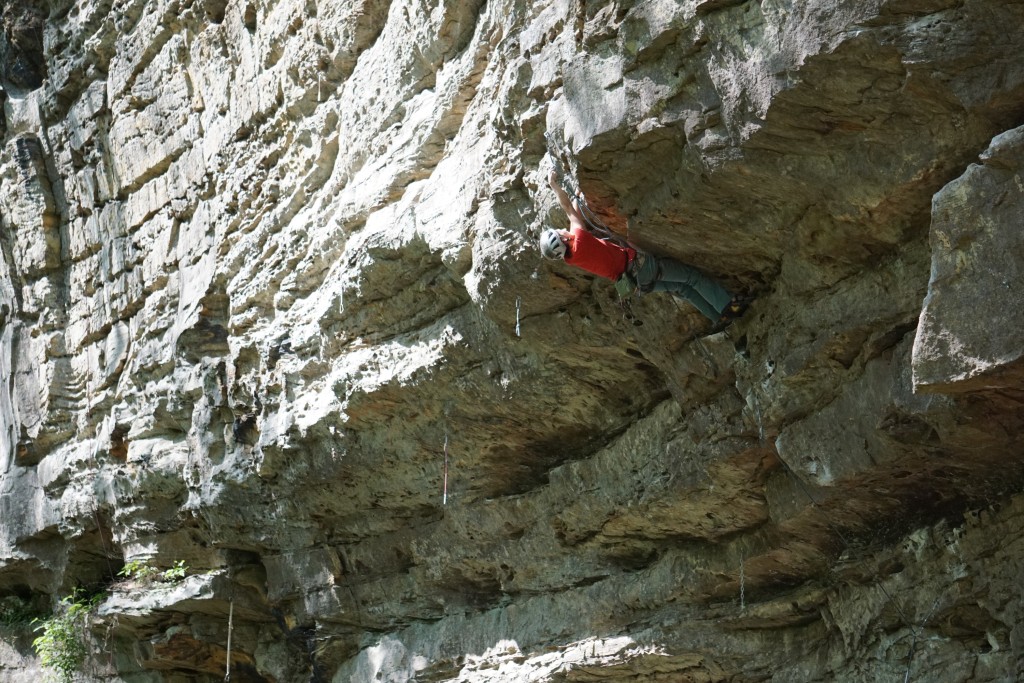