For our family, the month of May marks perfect sending conditions at one of our favorite crags – Hawksbill Mountain in the Linville Gorge. The sending season here is short – if you come in April your hands will for sure numb out due to a frigid combination of chilly temps, shady rock, and brutal wind gusts. But if you wait much past early June, the humidity makes for pretty manky crux holds, especially by late afternoon once the sun comes around.

Although we can be at the crag parking lot in 2 hours flat, the hike is pretty intense, especially with the kiddos…a relentless uphill slog for 30-40 minutes, followed by a rocky scramble down a rhododendron-laden gully for another 20 minutes or so. Once your down there, the cliff base is rocky, with very few flat areas, which makes chasing after a climbing toddler even more stressful (and tiresome) than usual. All that said, despite the fact that we love the climbing here, we tend to only hit this area a time or two each year. 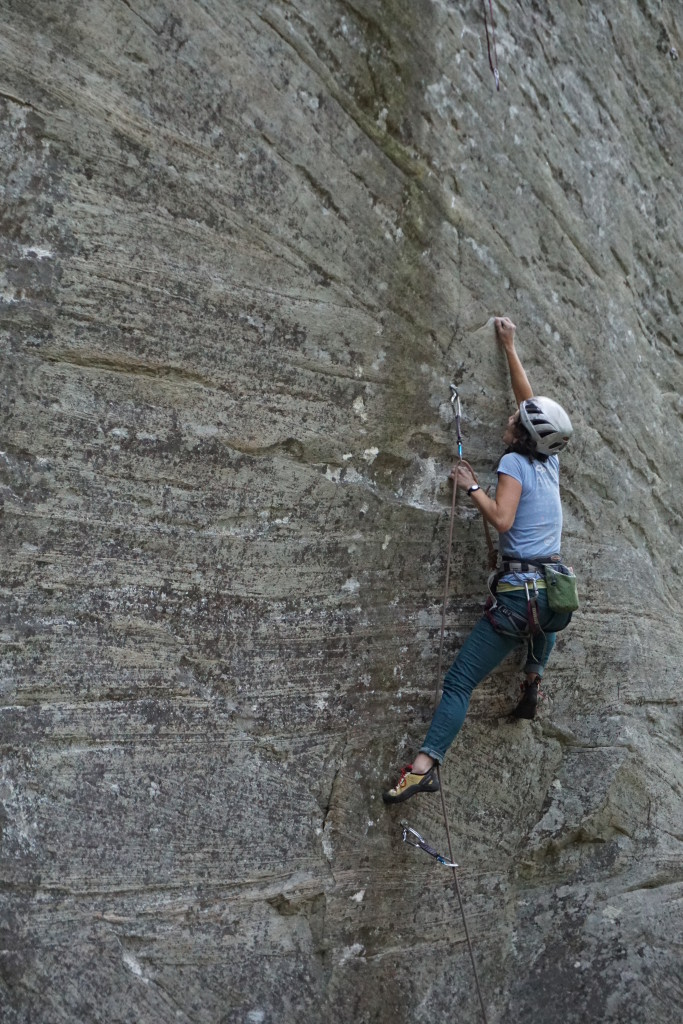 But after this past weekend’s excursion, I’m hoping that we can start to change that.  As opposed to previous years where the approach took over an hour (and about a pound of hiking bears), Big C dominated the hike on Saturday.  He even said his favorite part was scrambling up and down the gully.  Apparently 6 year old legs ARE stronger and longer than 5 year old ones! 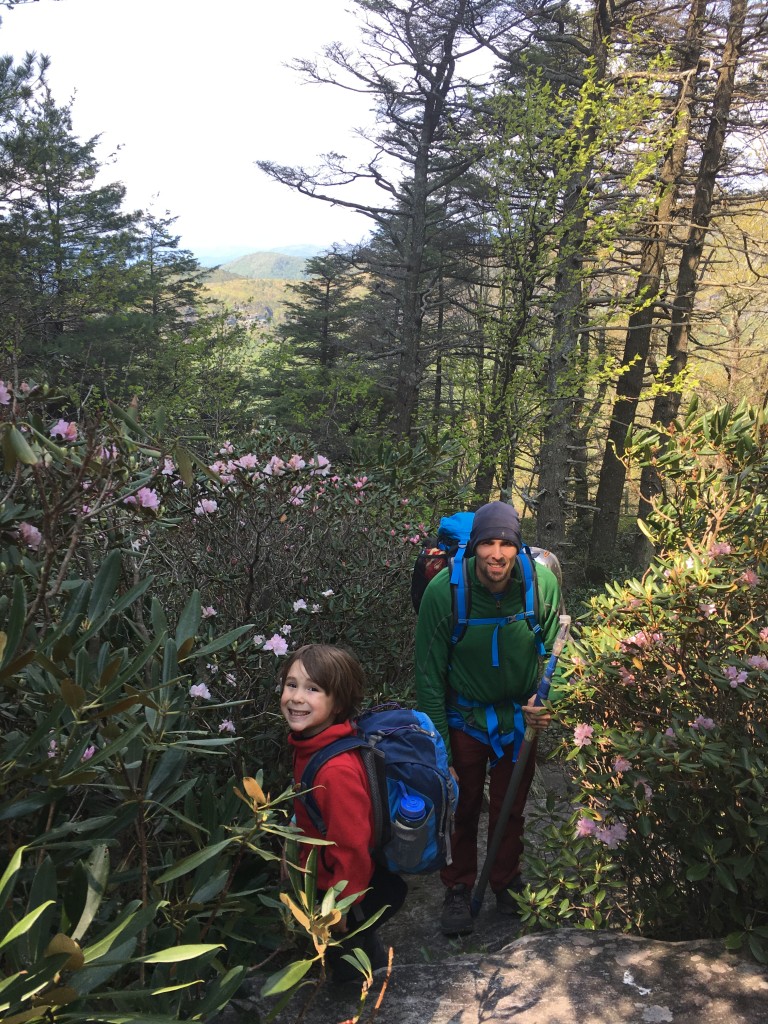 Blooming rhodos made for a beautiful approach!

The great part about Hawksbill is that there are a whole hosts of routes that are in a good project range for the CragDaddy and I.  On the 5.12 wall, the only route either of us has sent has been Hard Rock Cafe 12c (and congratulations to the CragDaddy on the send this past weekend!)  As for me, I am now completely invested in a new route obsession – Tips Ahoy 12d.  Grade-wise it’s a little harder than some of the other lines on the wall, but I’d been told by more than one person that this one would be a good one for me to try.  Apparently, it’s more sustained than the other lines, but the moves are not quite as big.  Add that to the fact that my friend Drew already had the draws up, and hopping on it was a no-brainer!

My first attempt I opted to toprope it.  I’d never led 12d before, and that pre-hung rope was just too tempting to pass up!  The initial moves were hard but I actually made it through clean – long NRG-style lock0ffs to small but positive edges.  Then came the crux – getting paired up on two tiny razor blades to make a toss to a sharp, pointy crimp, followed by another deep lockoff to another sharp crimp (as the name suggests, this route is not exactly easy on the finger tips.) I flailed around a LOT  before finally settling on some beta that worked for me, but i got it figured out eventually.   After the crux comes a traverse that is more technical than it is hard, followed by a ladder of crimps that, while significantly easier than the rest of the route, is still way to hard to be considered a “victory lap.”

Next I tackled the route on the sharp end – a big step for me, as I’d never led anything this difficult before.  I was surprised at how good I felt.  Everything was going great until I reached up to clip the 3rd bolt and realized that no matter how hard I tugged, no more rope was coming.  I heard a bunch of commotion below me (which included a few choice words that I generally don’t like my children to hear), and saw my belayer desperately trying to pull my rope out from under a big rock.  I managed to hang on long enough for things to get sorted, but sat on the rope immediately after getting the bolt clipped.  I would LOVE to say that my first 12d would have gone down 2nd go had it not been for that incident…but I am 99.9% sure that I would have fallen at the crux.  Stuff like that happens and is all part of the game – my belayer obviously felt really bad about it and apologized profusely…but if you are local, feel free to give Kurt Fischer hell next time you see him 😉 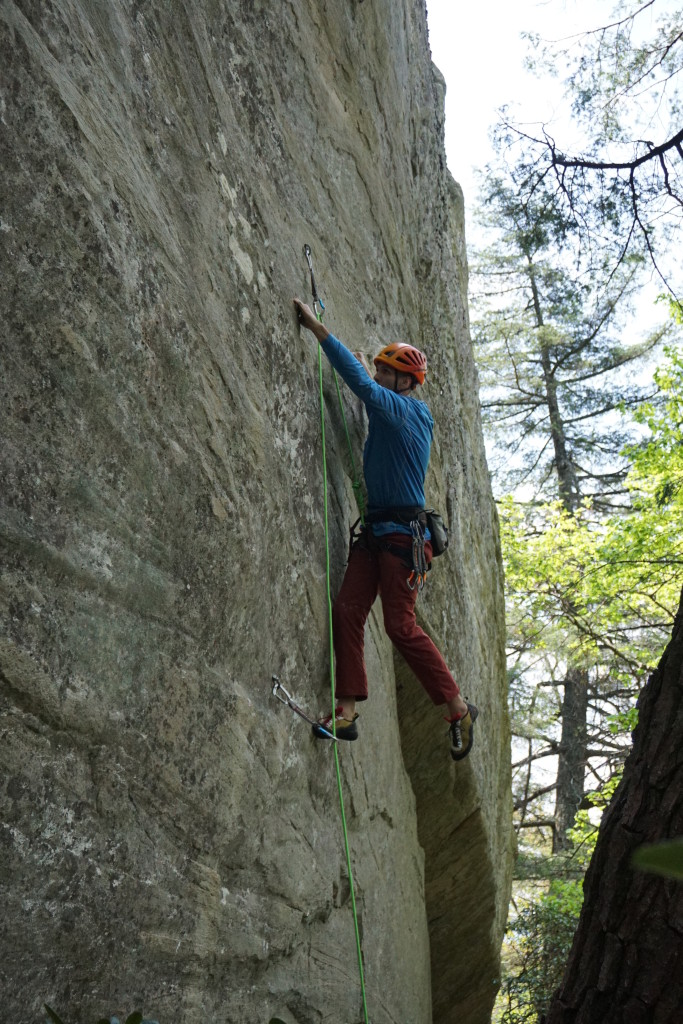 After the hang, I actually shocked myself by making the crux move 1st go, although I immediately rested before the traverse (the fall is clean, but I always have a hard time committing to traverses!)  Once I started the traverse, I took it all the way to the top.  Despite all the shenanigans I felt awesome about a two-hang, and was confident that while it might not be in the same day, a send was definitely attainable! 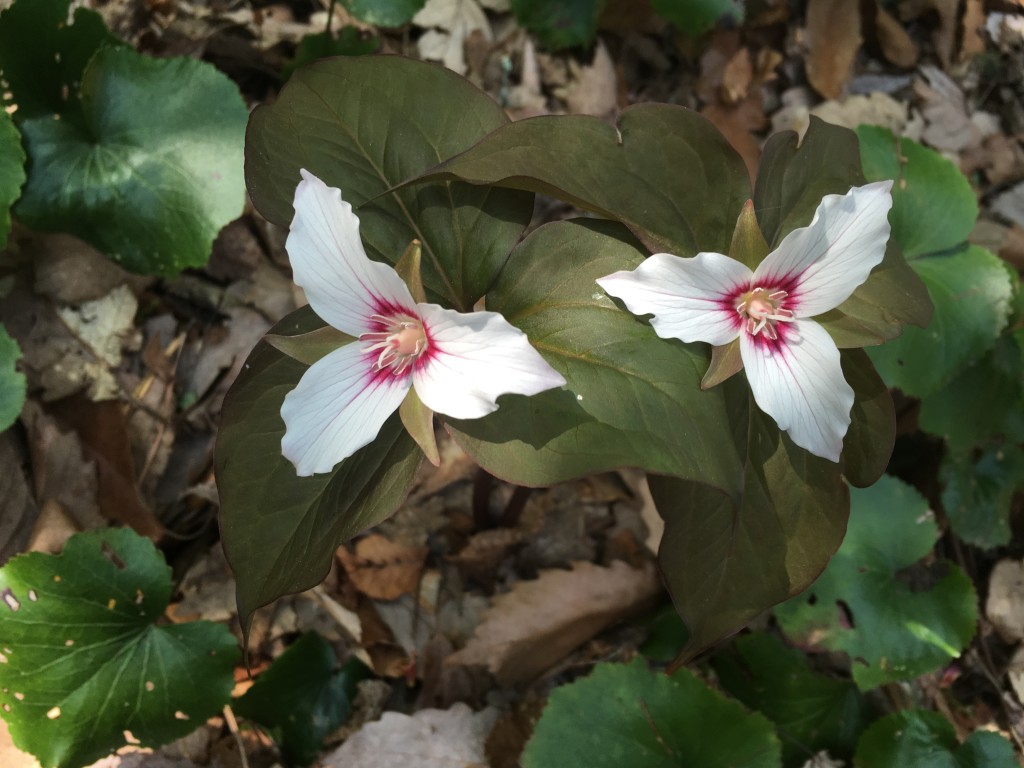 More spectacular wildflowers along the approach!

By the time my turn in the rotation came up again, my spirit was willing…but my flesh was obviously weak.  I took a rather awkward but safe fall trying to hit the clipping hold for the 2nd bolt.  On the crux holds my fingertips felt so raw that I imagined only a microscopically thin layer of skin was keeping them from becoming completely shredded.  I limped my way through the crux, linking only a couple of moves at a time, and hobbled my way to the finish, after resting on the rope several more times along the way.

Part of me wishes I would have stopped while I was ahead at attempt #2, because I left the crag feeling more destroyed than confident.  But I know the more mileage I get in on it, the better I’ll have it dialed.  And I will not be able to send it unless I have the moves COMPLETELY dialed in, since there are pretty much zero rests on the entire route, save a stray shake here and there.

It feels great to be able to focus on something new.  I realized I’ve spent most of the spring focused on unfinished business from the year before (ie Jesus and Tequila 12b.)  Since I probably won’t be able to touch that one again til the fall, it is really nice to have something else on the horizon that could go soon.

I’m hoping to get another crack at it in a couple of weeks.  In the meantime, it’s 4x4s in the gym, followed by a long weekend at the Red.  Hopefully the weather will be more spring and less winter this time around!