I’m baaaaaaaack!  (In case you haven’t been missing me, this is the longest stretch of blog silence I’ve ever had since the dawning of “Cragmama” back in 2011!)  With weather too hot for climbing, and revving up our homeschooling again for the year, there has been too little to write about in not enough time anyway, so everything just went on the backburner.  But now that Zu (no longer Baby Girl Zu!) is at preschool a couple mornings a week, and fall adventures are upon us (!), I’ve got plenty to write about, and hopefully juuuust enough time to do it. 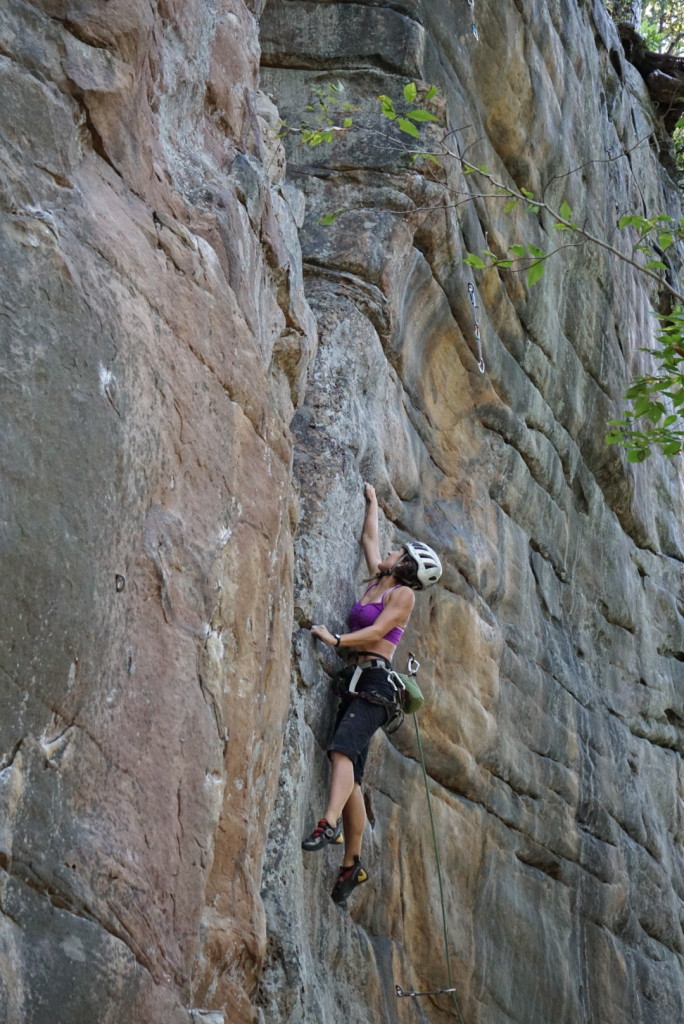 Going big on Audiophering 12a

That being said, it felt GREAT to get back to the New River Gorge for Labor Day!  To be honest, the past handful of trips to the New have been lessons in frustration for me.  A couple of them I didn’t even write about because I had a hard time finding a positive spin after getting constantly shut down.  My weakness at the New has ALWAYS been POWER.  The moves are long, often without a lot of features in between, and the higher I go in the grades, the more trouble I have with making reaches.  My natural climbing style is very static, and it’s much more comfortable for me to just lock off hard rather than jump, which doesn’t always work.  But over the summer I decided to try and change that! 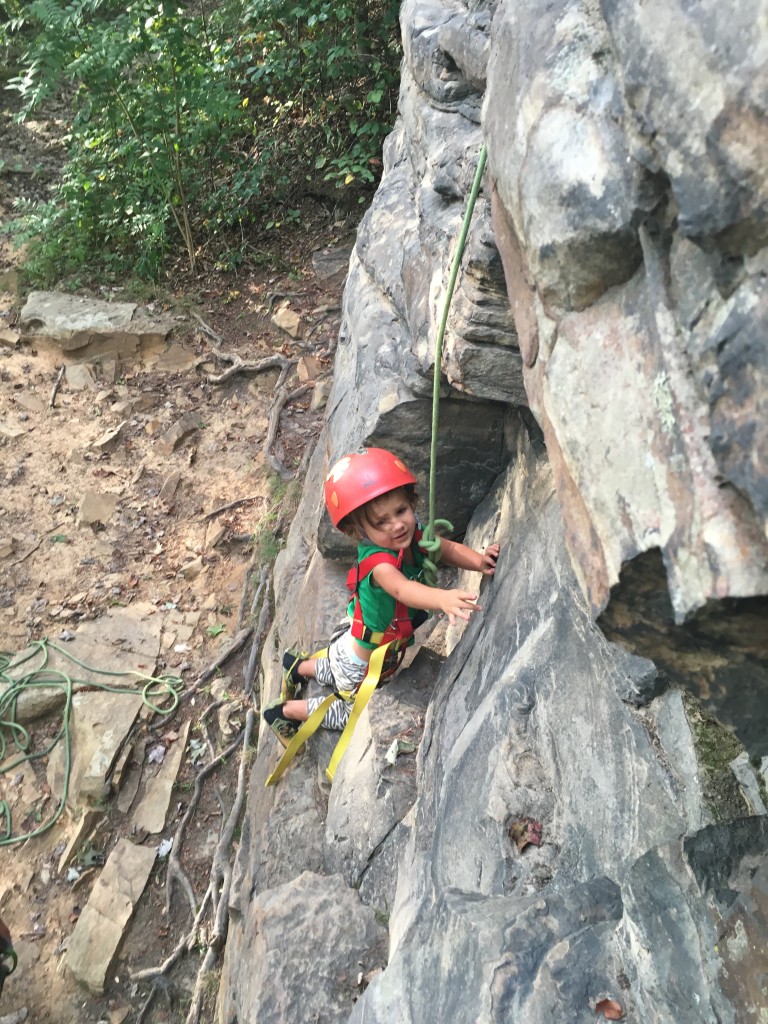 The Zu gettin her climb on at Small Wall.

Rather than going through a periodized cycle of “Base Fitness, Strength, Power, Power Endurance” to get ready for fall, I decided to focus solely on power and dynamic movements all summer.  The typical prescription for training power is a campus board, but I felt like I needed to go back to even more basics than that.  I did movement drills with easy dynos (easy, as in the distance between holds is not far enough to warrant a dyno, but gave me a chance to practice form.) I did a lot of bouldering.  On moderate routes, I tried to do the problems as “big” as I could – skipping holds, never matching, etc.  I also did a lot of what the CragDaddy calls “Try Hard” Bouldering.  While sending outside is always extremely motivating for me, sending indoors is…..not.  My first inclination is to give up after just a few attempts, so the majority of my session tended towards onsighting and repeating other problems I’d previously onsighted fairly easily. 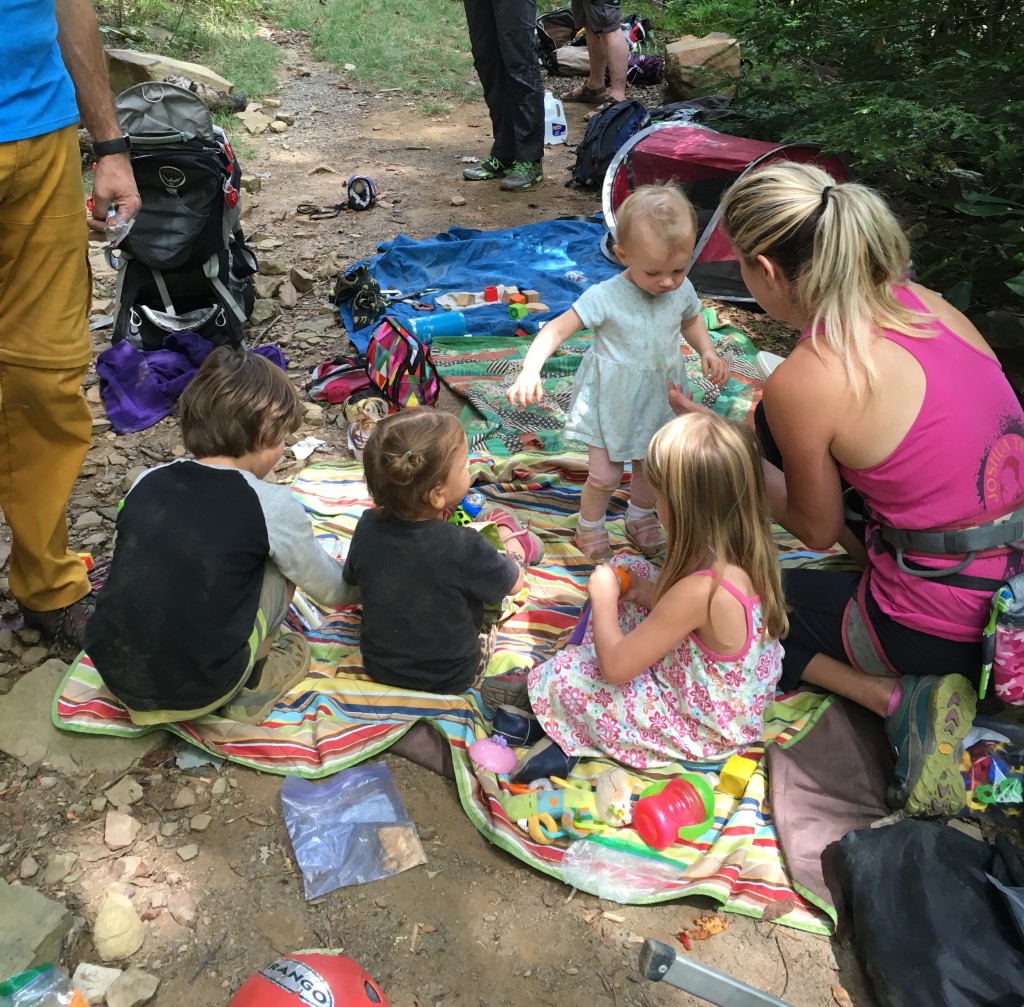 But the CragDaddy challenged me to really TRY HARD in the gym this past month.   I’ve been projecting problems that don’t come in the first few tries.  I’ve been getting creative with finding my own beta when the intended way doesn’t work for me.  I’ve been re-sending problems that I’ve previously projected, even though sometimes they feel just as hard subsequent times.  And you guys…I think it worked!!!

Our first day was spent at Area 51 of the Meadow.  We climbed with two other families, and between the 6 adults, there were 5 kids running around, ranging in age from 12 months to 6 years.  It was chaos and it was awesome.  The kids had a blast together, and the 3 littlest ones even managed to take their naps ALL AT THE SAME TIME.  I got to climb with some strong women, and I even got to trade belays with the CragDaddy, which hardly ever happens!  To top it all off, I flashed Safety Word 12a (first ever 5.12 flash at the New!) 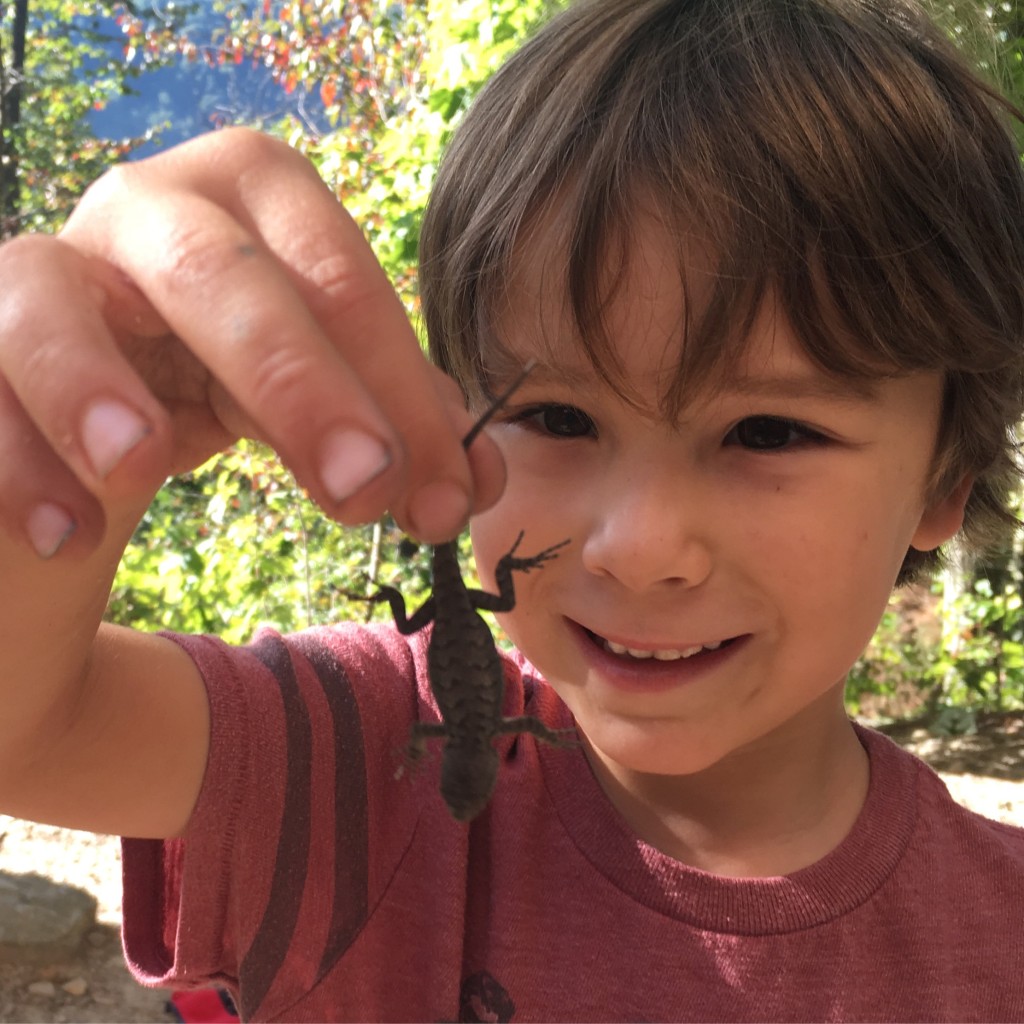 On Day 2 I only got in half the pitches from the day before, but they were twice as long (and a lot more sustained).  Combined with the long hike out to Fantasy Wall at Endless, I was pretty zonked by the end of the day.  However, I did manage to resend Aesthetica 5.11c (not an ideal warm-up…but all the easier routes were mobbed.)  I also got in two really good working burns on Blackhappy 12b.  This is my new favorite climb.  As far as I’m concerned, it’s second only to Jesus and Tequila for “Best 5.12 at the New.”  I went bolt to bolt the first go round, and managed a 3-hang on my second go.  What I was most pleased to see was that I had no trouble with any one move, which is a rarity for me at the New, especially since the book describes this one has having “full-span reaches.”  I’m optimistic that with a few weeks of weekend trips and mid-week 4×4’s I’ll be in good shape to send it later on this fall.

Our last day was spent at Cotton Top…along with what seemed like everyone still left in the gorge.  It was a madhouse.  After a quick lap up Cottonhead 10d, I got in line for Psychowrangler 12a, and was happy to make the first hard move on the first try, which has never happened before.  I came down after a few falls trying to get into the dihedral.  I hate taking a long time on routes when there are a ton of people behind me waiting their turn to climb.  The CragDaddy felt the same way, so we moved on to Audiophering 12a, a lesser-known route on the main wall that never gets any traffic…although after getting on it, I’m not sure why, as the moves are cool and the rock is bulletproof! 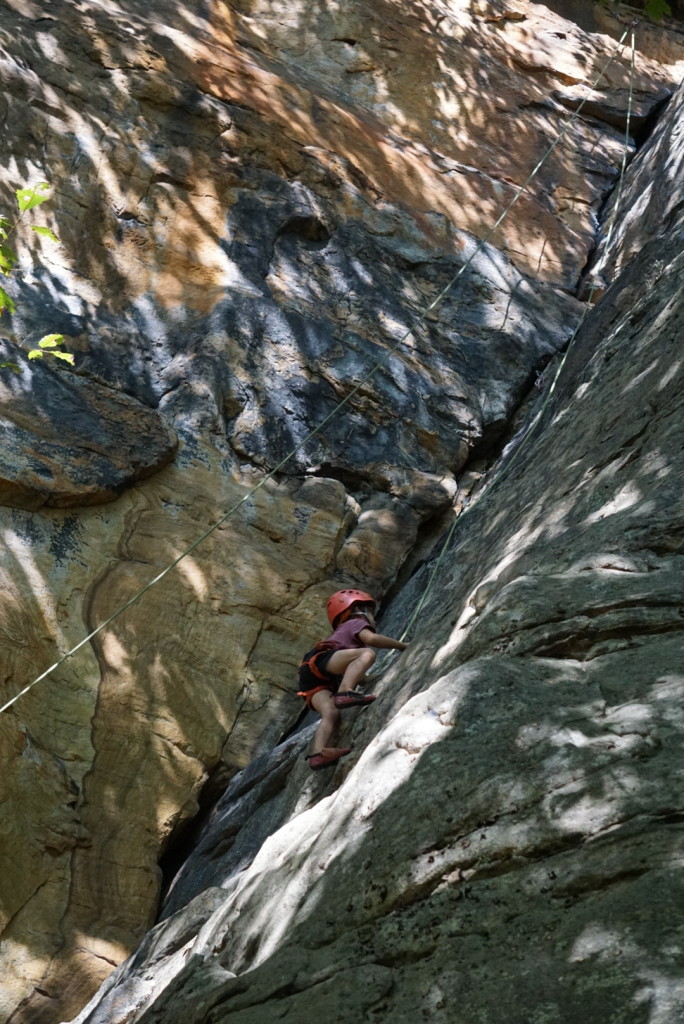 Big C slabbing (not crack climbing…) his way up Doce Do 5.6

I wasn’t super confident heading into this one, as the guidebook mentions a “jump move” for shorties.  But as the CragDaddy pointed out, it fit well with my m.o of late, and would be a good way to put my training to the test.  It took a while to get my beta dialed in, but I pulled the rope, and sent 2nd go!  And FYI, if you’re thinking of getting on it, don’t let the “jump move” scare you away.  It’s a solid deadpoint for sure, but while I “felt” like I was jumping, one foot still stayed on…barely. 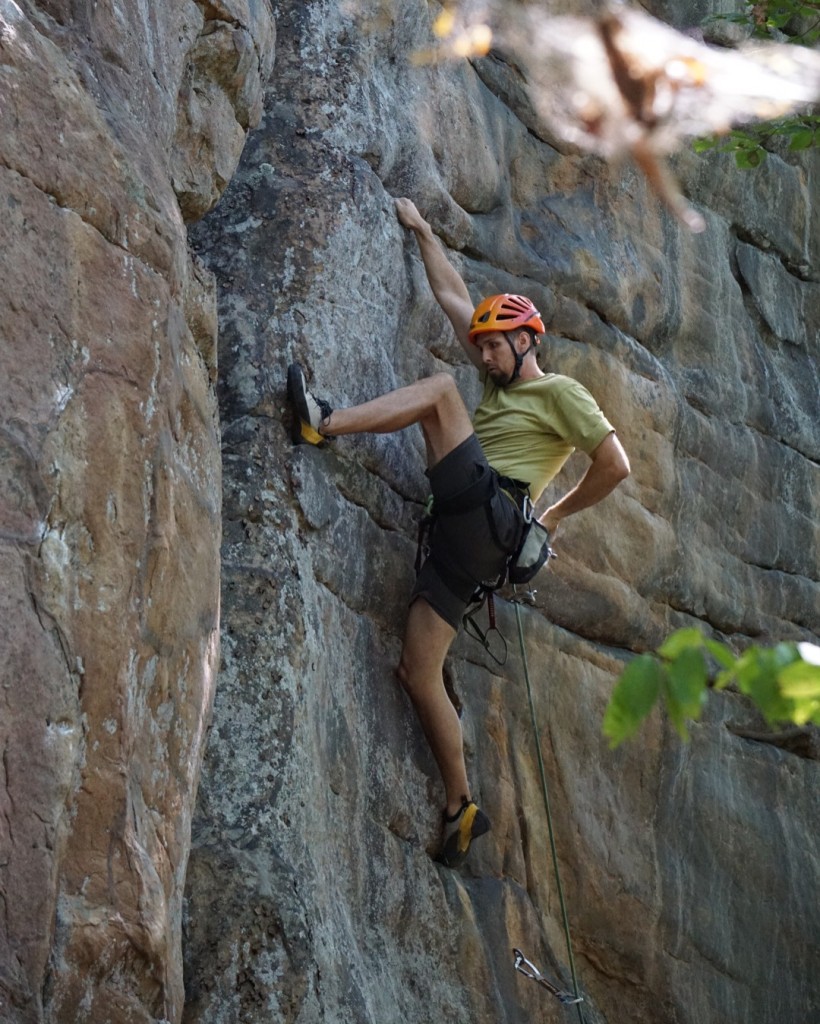 With all the bouldering I’d been doing before this trip (and all the roped climbing I’d been NOT doing), I hadn’t come into the weekend with a lot of sending expectations.  So to walk away with a pair of 12’s and another one in the works felt awesome.  But what felt best of all is that I can tell my power and “try hard” training has been working.  Almost every one of the routes I got on this weekend (even some of the easier ones), had individual moves that potentially would have given me fits earlier this year.  But all the movement drills and limit bouldering has really upped my confidence on bigger, more powerful crux sequences.  Regardless of what projects go down this fall, I’m looking forward to a renewed confidence in my NRG climbing as a whole.  It feels good to be “able to play.”

Oh…and sorry about the lack of pictures.  The camera only came out once while the grown-ups were climbing.  But we at least got some kidcrusher documentation!  Happy Fall, ya’ll!