It’s the middle of September, and that means it’s time for two things – migrating north for the Craggin’ Classic at the New River Gorge…and my kids getting sick.  Last year, it was a mysterious fever for Little Zu.  This year, it was a tummy bug that left its mark on several family members before heading elsewhere…but that’s probably all you need to know about that. 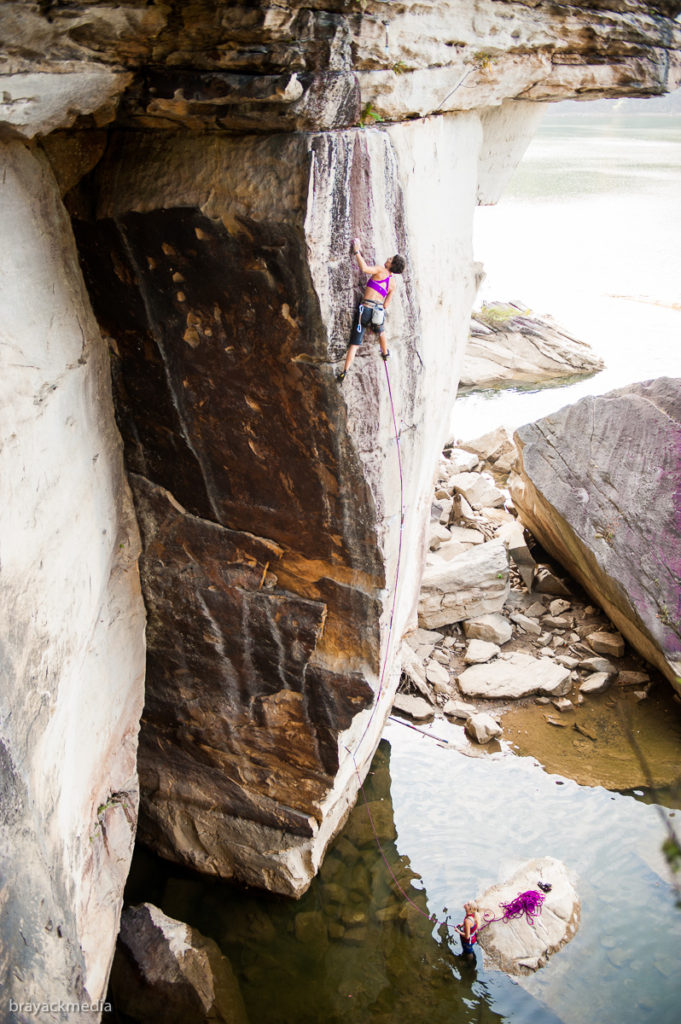 Anyway, by the time the event was underway, everyone was (mostly) okay, and our logistical plans (always the crux when climbing with kids) went off without a hitch.  The kids and I had headed up on Thursday afternoon, and managed to squeeze in a hike at Beauty Mountain before heading over to the Sponsor’s Dinner.  The first 10 minutes went well.  Then Little Zu took a digger to the face on the blacktop, leaving her with a giant fat lip and bloodied-up face as a souvenir.  The rest of the night pretty much went downhill from there, but by the next morning everyone was psyched and ready for a day of climbing and photos at the Lake with the rest of the Trango gang. 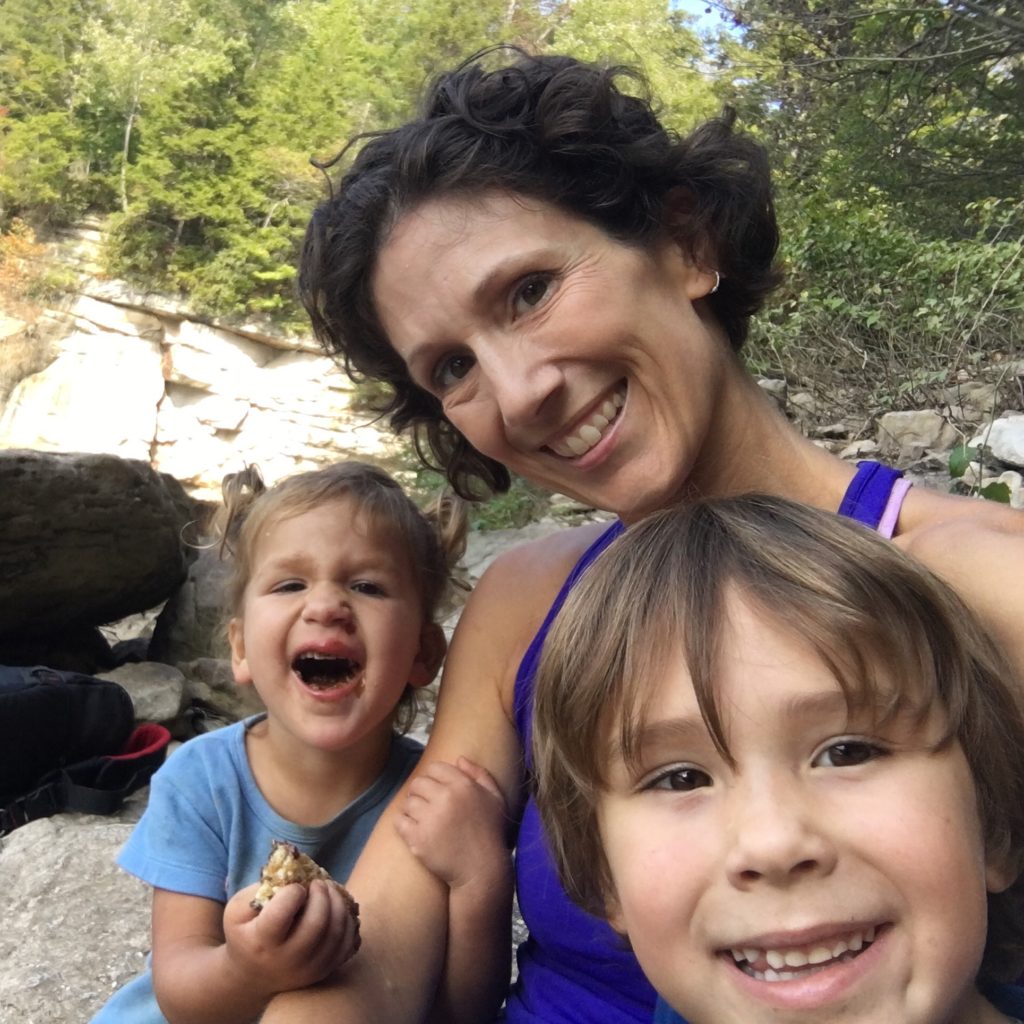 Our resident photog, Dan Brayack, had his eye on Mutiny 11d, a gorgeous arete that is easily recognizable even from the highway.  The only “catch” was the water level, since the first 10 feet of this route are submerged during high water.  Usually by mid-October the water is low enough to be climbable, so we were a little bit early.  As it turns out, however, the water was juuuuust low enough for us to sneak in and get some amazing pictures.  A foot higher and we would have been soaked.

My belayer and I rolled our capris up as high as we could, I clipped my climbing shoes to my sports bra, and we waded out across the thigh-high water to the arete.  Conveniently enough, one of the boulders at the base was sticking out of the water enough for us to drape the rope across.  We pre-clipped the first bolt, I put my climbing shoes on while dangling over the water, and away I went!  Climbing out over the water like that was a surreal experience, and the route itself was amazing.  Big moves to big holds down low, then a thin face crux heading to the anchors.

Somehow, despite my best efforts, my shoes had still gotten a little bit wet.  That combined with the flash-pump that comes from not warming up properly meant I pretty much went bolt to bolt first time up.  Luckily though, Dan wanted to shoot the route again from a different angle, and I was able to send fairly easily second go.  A BIG thank you goes out to Everett from La Sportiva for keeping the kids corralled back on the beach while I was climbing.  By the time I waded back across, Big C was “fishing” with a pole Everett had helped him procure using a stick and some string, and Little Zu was sitting contentedly in his lap with some gummy bears.  Three cheers for the village it takes to climb with kids! 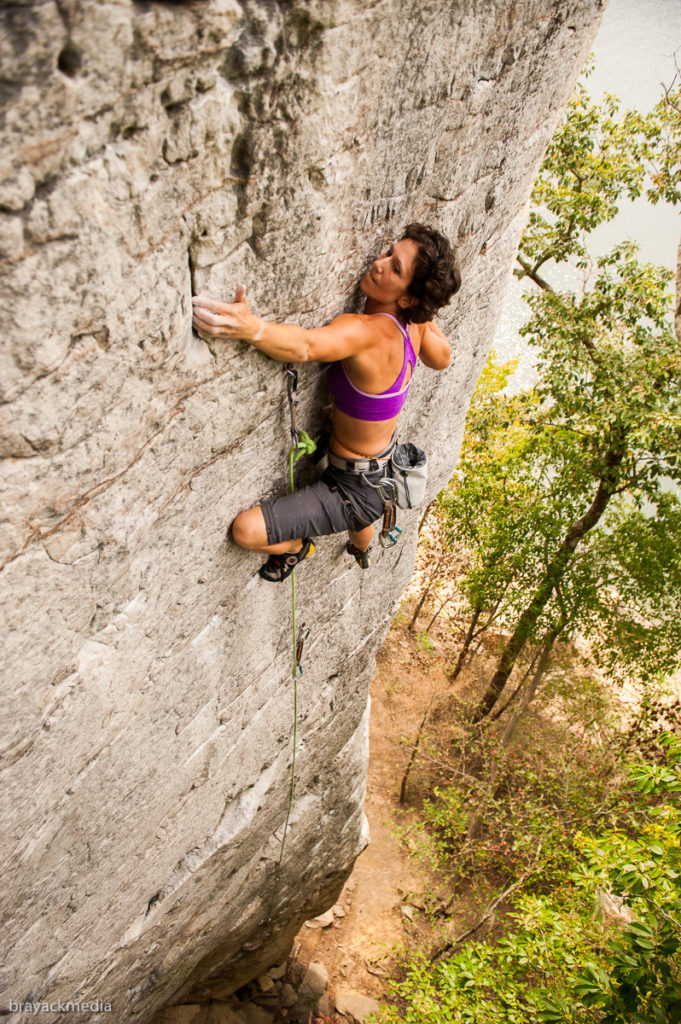 We then moved down to Long Wall at the main area, where I got a chance to tick another classic 5.11 I’d been wanting to get on – Hot and Bothered 11d (aka 6 Dollars.)  This one took two goes as well.  Pretty sustained crimping, with some finishing moves that could easily botch a redpoint attempt. 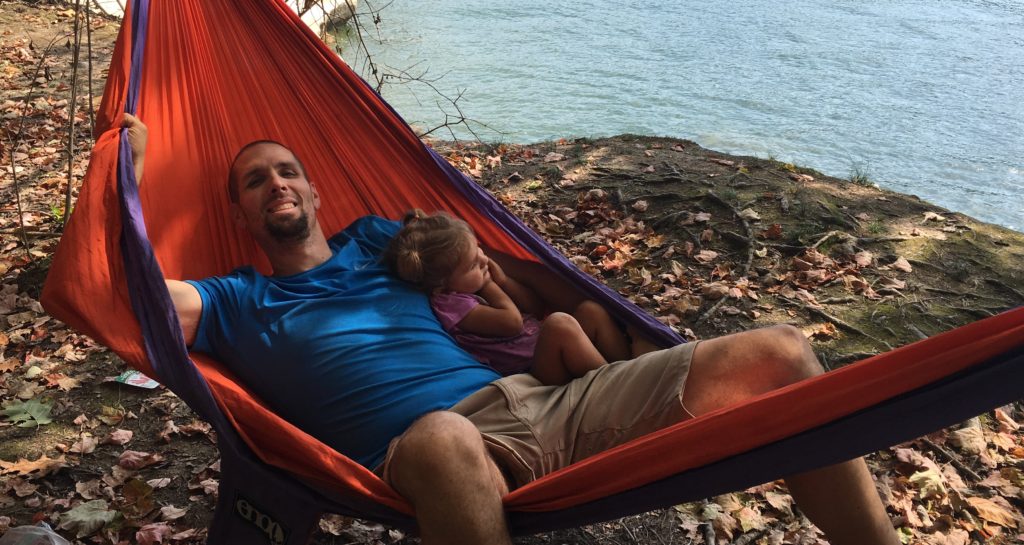 A sweet little girl with her Daddy

By this point it was time to head back down to set up our booth for the event.  The CragDaddy rolled into town shortly after we got back, so I tagged out of kid duty and put my “athlete hat” on for the rest of the evening.  It’s always fun having conversation after conversation with other like-minded folks.  In fact, talking to random people is one of my favorite parts about doing events like these.  Catching the Reel Rock Film Tour was also a bonus. 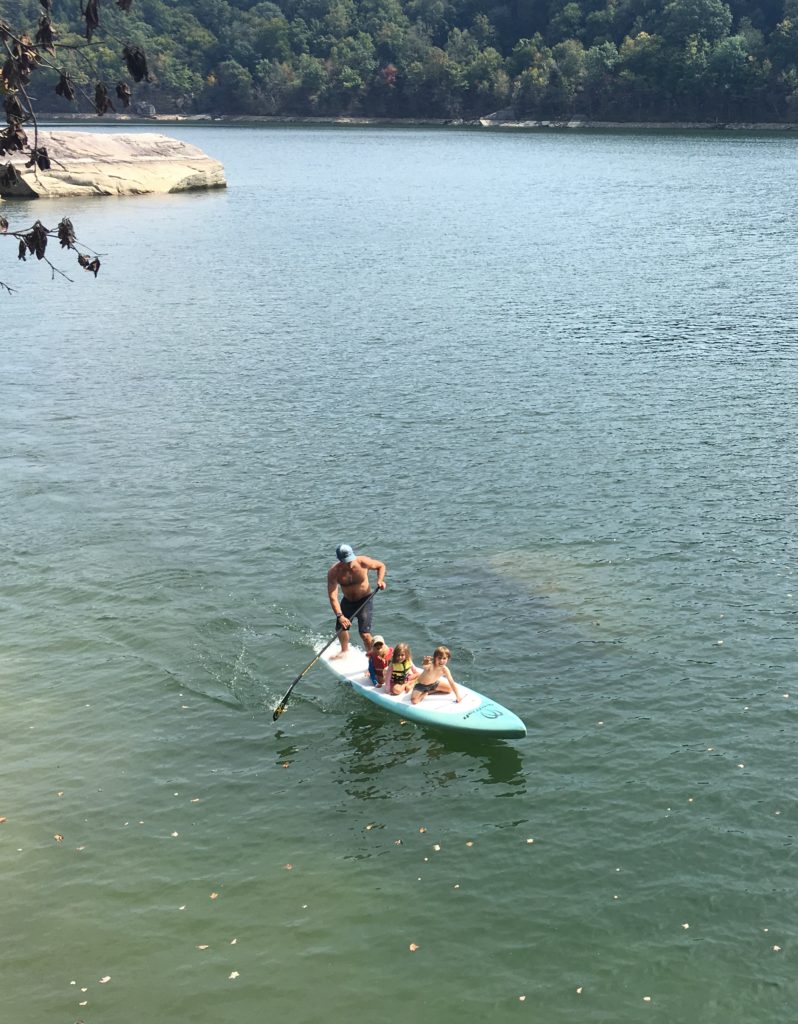 Saturday brought even more heat and humidity than the day before (seriously, where is fall?!?)  My crew headed back to the lake.  The CragDaddy and I hopped on a few routes in the Coliseum, but our performances were far from noteworthy.  One highlight was an impromptu hangout with a SUP family from Ontario (the dad was competing in a whitewater SUP competition the following day.)  Big C scored multiple rides, and if he and I wanted a family SUP before…we sure as heck do now!  (#gearjunkies)

We attempted to get out Sunday morning, but got rained out after just a couple of pitches at Bridge Buttress.  As far as the weekend as a whole, I might not have gotten in as much climbing as I’d wanted, but what I did get on was classic.  And, I won’t lie, it felt good to get back into town at a reasonable hour on Sunday!  Thanks again to Dan for taking some awesome pics, and the rest of the team for a great event!