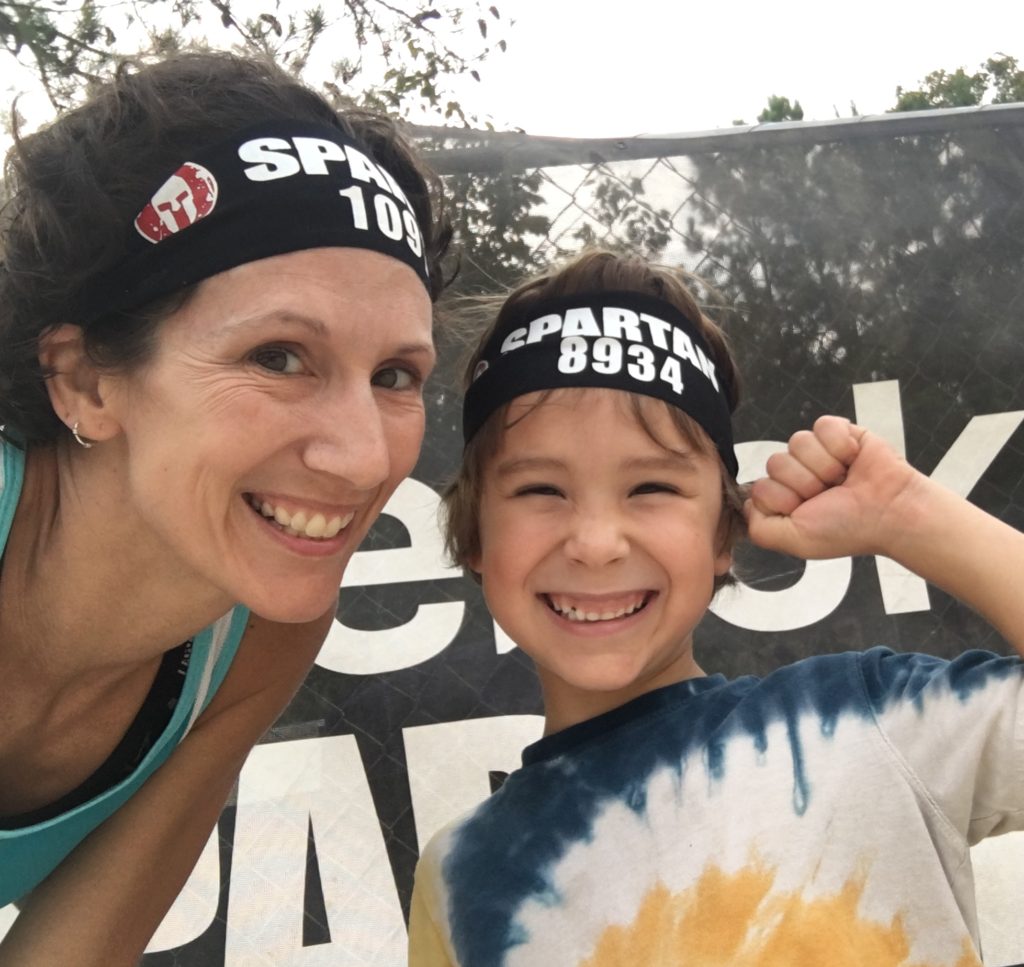 Best cheerleader ever to have at the starting line!

It all started earlier this summer with the new NBC TV show “Ultimate Spartan Challenge.”  My ninja warrior wanna-be son was all about it from the minute he saw it.  Add to that the fact that we actually knew a few of the competitors…and his mind just exploded week after week.  He began “training” everywhere – in our backyard, on the playground, at the crag, insisting that he was going to be a Spartan when he grew up (and that he was going to be on the Ninja team, because first he was going to be the next American Ninja Warrior.)

I knew it would be a shame to waste all that psych, so I did a little digging, and realized that sure enough, there was going to be a Spartan Race just a few hours from us in September…AND they had a Kid’s Race!  It seemed like the perfect plan – Big C could participate in his own race, and it would give me some fun cross training to do during the long doldrums of summer when it’s too hot to climb.

I trained hard, but not SUPER hard.  I definitely upped the ante of my workouts, including sprints, hills, and increased distance on my runs, rather than just loping along listening to music.  I also included intervals of other exercises – push-ups, planks, lunges, but always burpees.  ALWAYS burpees.  (As a side note for anyone not familiar with Spartan Races, if you fail an obstacle, the penalty is 30 burpees.)’ I always had to check my gears for wears when in training and before the actual event. As Lilly Harvey of ShoeAdviser said, shoes for Spartan race need to be able to handle a range of locations and terrains, while also providing support. It is important that your shoes suitable for the spartan race are durable so they can last you throughout your intense training.

In addition to the extra running, I was of course still at the climbing gym 3 times per week, practicing my new try hard mantra (see last week’s post for more on that.)  But as far as specific training for specific obstacles, I didn’t do anything special, as I had absolutely no idea what to expect.  Canaan didn’t do a bit of running (other than the million steps that 6 year old boys get throughout the day!)  But he got his playground obstacle game on point!

Fast forward to 0 dark thirty last Saturday morning as I’m staring down the lame excuse for a continental breakfast at our Ft. Bragg hotel.  There are 3 other people in the room, 2 men about my age, and a woman who appeared to be somewhere between my mom and my age.  All three were quite fit looking, and all three look quite a bit more prepared than I did.  The men were downing Cheerios like it was Christmas morning, but the woman had brought her own food, some strange liquid concoction that looked as tasteless as it was healthy.  Two out of the three were sporting “Spartan Finisher” t-shirts from previous races, and all had beefy tread on their shoes that made my shoes look like bald tires.  They all had sleek, black clothing on, as compared to my most comfy pair of decade old running shorts in a shade of obnoxious salmon. 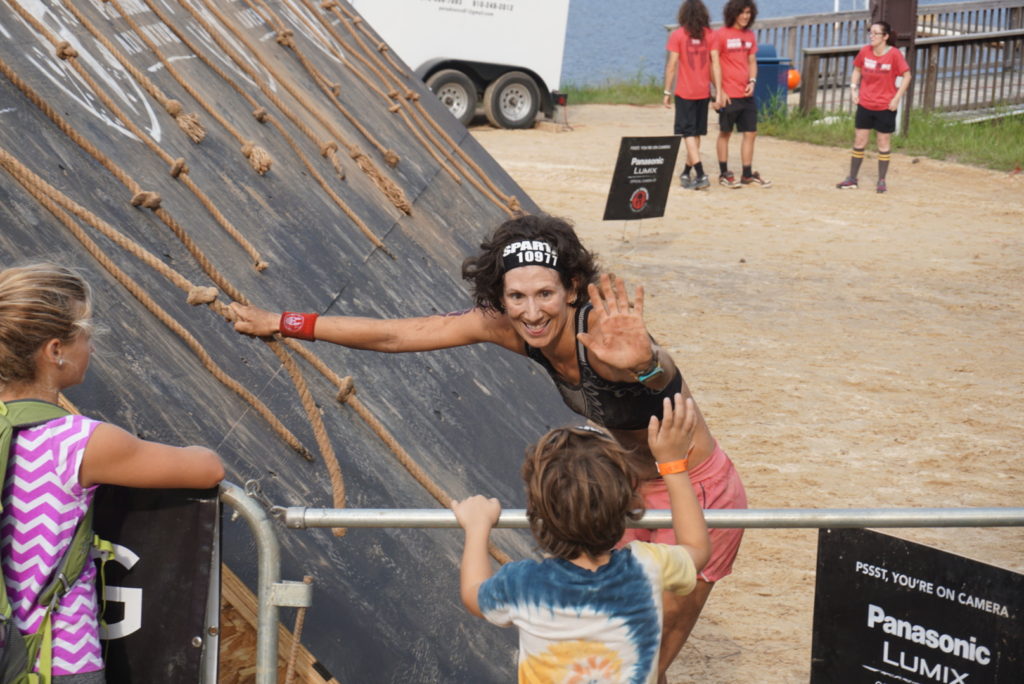 High 5’s from Big C heading into the Slip Wall

Just when I was starting to question why I’d let my friend Joy (one of the ones we knew from the show) convince me to enter in the “Competitive” Heat, it was time to head to the race, and before I knew it, I was at the starting line with a couple hundred other people.

The first 20 minutes of the race were filled with self-doubt.  I thought I’d positioned myself at the back of the pack, so I was surprised when it seemed like 200 people blew by me like I was parked in the first 5 minutes.  My first mile is ALWAYS very slow compared to the rest of my run, so I resisted the urge to try and keep up with everybody else, and just kept doing my thing. 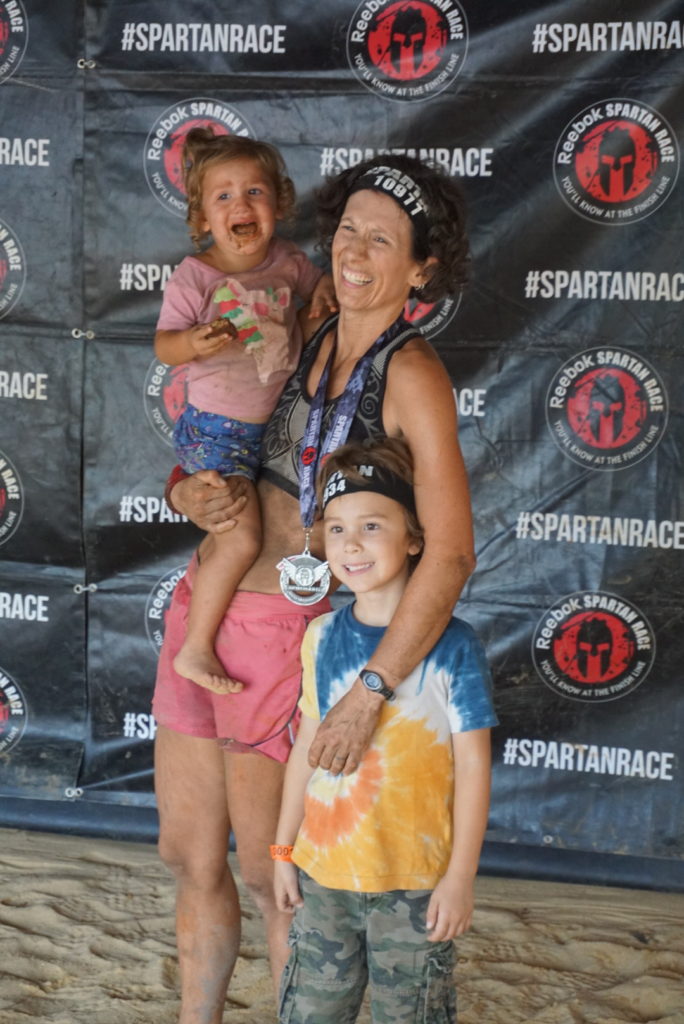 The first few obstacles were pretty easy and can be summed up with the words over, under, or through.  Also muddy water.  Lots of muddy water.  Then I found myself at the Atlas Carry.  I have no idea what that stone weighed, but when I bent down to lift it up it didn’t budge!  After wrestling awkwardly with it for a few minutes, I finally managed to sort of roll it on the tops of my feet and get it off the ground, although I’m pretty sure it never got any higher than my knees.  Thankfully I only had to channel my inner Strong Man Competitor for about 30 feet total.

After a cargo net climb that I made quick work of, I found myself at the Multi-Rig.  Basically a gauntlet of swinging holds (rings, pvc pipes, knotted ropes, etc).  As a climber, I can do monkey bars all day, right?  Not these, apparently.  I wasn’t counting on the fact that my hands would be wet and slippery (as well as the rest of me, leaving me nothing to wipe them off on).  I made it about halfway across before splashing back down into the mud.  Those 30 burpees felt amazingly difficult right after my struggle on the atlas carry, but I got through.  I glanced at my watch – 21 minutes.  Yikes, it was gonna be a long race.

But thankfully things started to look up before I got too discouraged.  I sailed through some easier obstacles, my heartrate finally came down from the Atlas Carry and the burpees, and I worked my way up to my normal running pace.  I even passed a dozen or so people, many of which were the ones that had whizzed by me in the beginning.

The last half of the course was much more enjoyable, probably due to the confidence boost that came with a few key obstacles playing to my strengths.  The inverted wall was a one move boulder problem.  The sandbag carry was nothing more than a steep approach trail with kiddos in tow.  Doing a lap with a gravel-filled bucket had my forearms on fire, but I managed to even pass a few people on the way up.  The Herc Hoist was hard, but I did it, and then of course there was the climbing wall traverse.  I knew I would never hear the end of it if I fell traversing across 2 inch wide edges, but thankfully it was only slightly harder that I’d pictured it being (probably due to my aforementioned bald tire running shoes.) 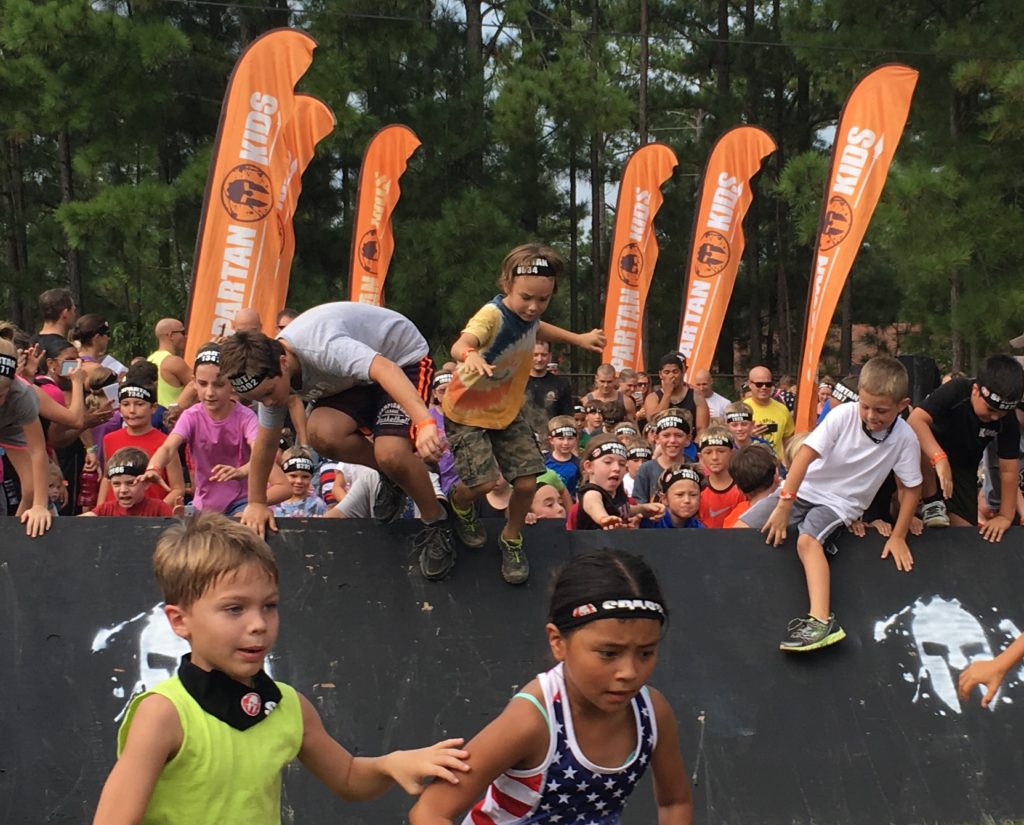 Having been lucky enough to avoid the burpee zone after my mistake on the Mult-Rig, I was thoroughly prepped to have to drop and give 30 more after my joke of a Spear Throw attempt.  I was feeling winded after that second set, but from there it was a downhill push to the finish area, where a quick scan locked my eyes on the only people there that I wanted to impress – the CragDaddy and both kiddos (all screaming wildly for me at this point.)

The main obstacle in the finish area was the rope climb.  Now I’ve been climbing rocks for about 10 years…but I’m pretty sure I’ve never climbed a rope.  Not even in gym class back in the day.  I’d seen plenty of people do it on TV.  It seemed simple enough – sort of twist the rope around your feet to help take the weight off your arms?  Apparently there’s a little more of a learning curve than I expected, and I just couldn’t figure out what to do with my feet.  Meanwhile the pump clock was ticking.  So I did what any climber would do in my situation – I pulled with my arms, over, and over, and over again.  Kipping my body up with my legs flailing around spread eagle probably made it pretty clear that I had no idea what I was doing, but somehow I still managed to hit that bell!  Yes!  After a quick high 5 from Big C before the Slip Wall, I finished the race in fine style (for me anyway), and proudly received all my finisher’s swag.

My final time far exceeded what I’d been expecting – I was 4th in my age group, and 17th overall for Competitive Women!  I had a blast and would DEFINITELY race again.  It seems like a great cross training activity during the climbing off seasons.  And now I know more specifically what random skills I need to practice (ahem, like throwing a spear and lifting heavy round objects!)

With my race out of the way, I could focus on the real reason we’d driven all the way up there – Big C’s race!  Since I’d finished so much earlier than expected, we were able to squeeze him into an earlier heat (which was great because Z was DONE.)  He did so awesome, and I am so proud of him.  The Kid’s Race is obviously not as strict about penalties as the grown-ups, but it was a moot point for him because he sailed through all of them with flying colors!  He has hardly taken his medal off since he got it, and it took some convincing to put his Finisher’s shirt in the wash yesterday. 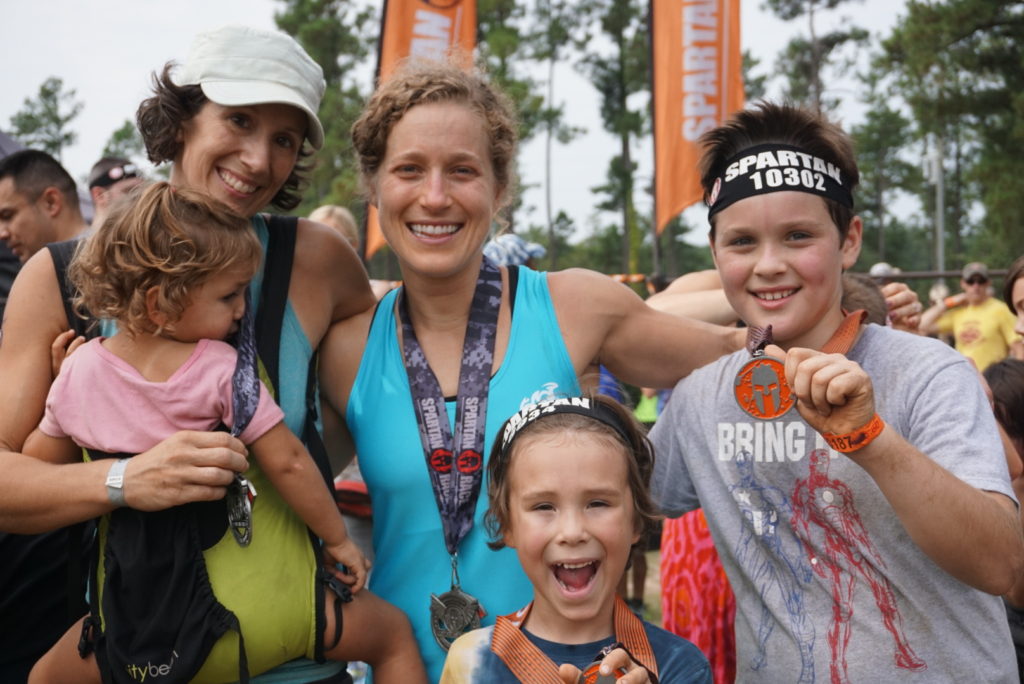 Me, Joy Cox, and the kiddos, Big A and Big C. SPARTANS! (And one future Spartan).

My main goal for this race was to provide a fun family activity that would inspire us to stay active and healthy.  (My secondary goal was to get through the race without sustaining any injuries that would make me sit out fall climbing season!)  Thankfully we were successful on all counts.  As we walked out, Big C summed things up with a statement that every parent loves to hear.  “Well, that was a good day.  Good idea, Mom.”