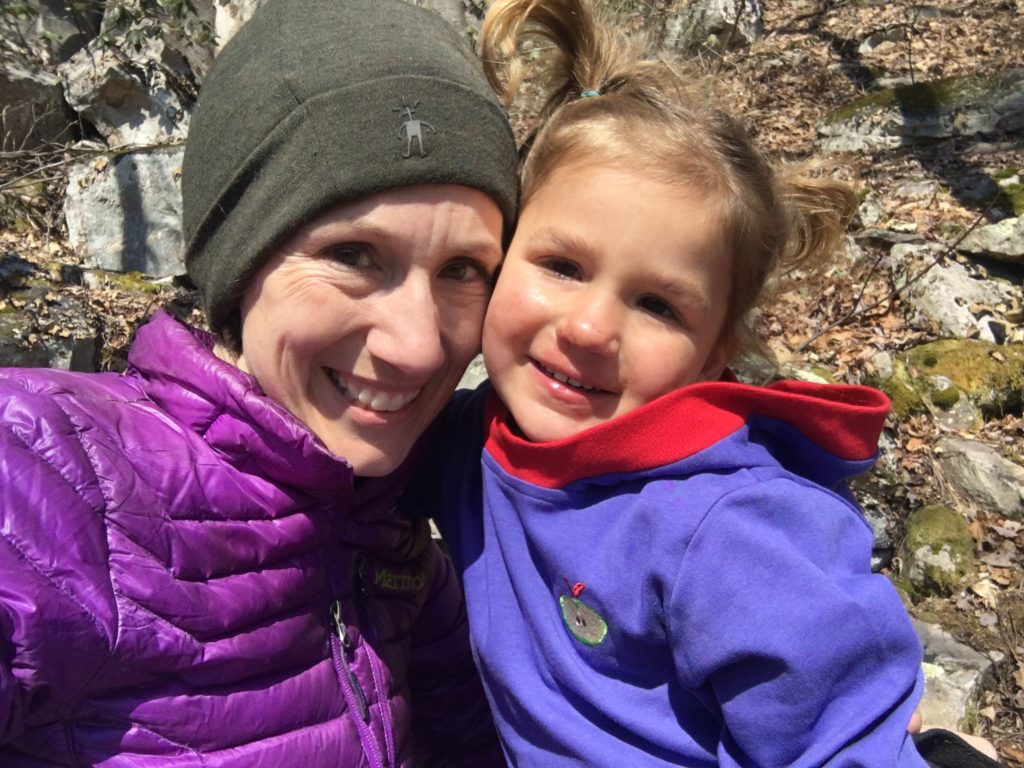 The climbing at Hidden Valley has been on our radar ever since the Carolina Climbers Coalition purchased the land at the end of 2014.  Early reports from friends sounded appealing – short approach, winter sun, summer shade.  But somehow we never managed to get up there until this past weekend.  A couple of times we did make plans to go – but then kids got sick, or the weather was yucky, etc.  But mostly, it’s just hard to get us away from the New during prime climbing season.  I guess we’re just spoiled that way!

Anyway, after lots of gym time, but very little outdoor climbing over the winter, neither the CragDaddy nor I had a lot of expectations going into the weekend.  We were just excited to get back into an outdoor groove as a family, and climb on some new-to-us rock with friends.  I was glad we had two days to explore, because it definitely took the whole family a while to warm-up (literally) to not only a new season, but at a new crag. 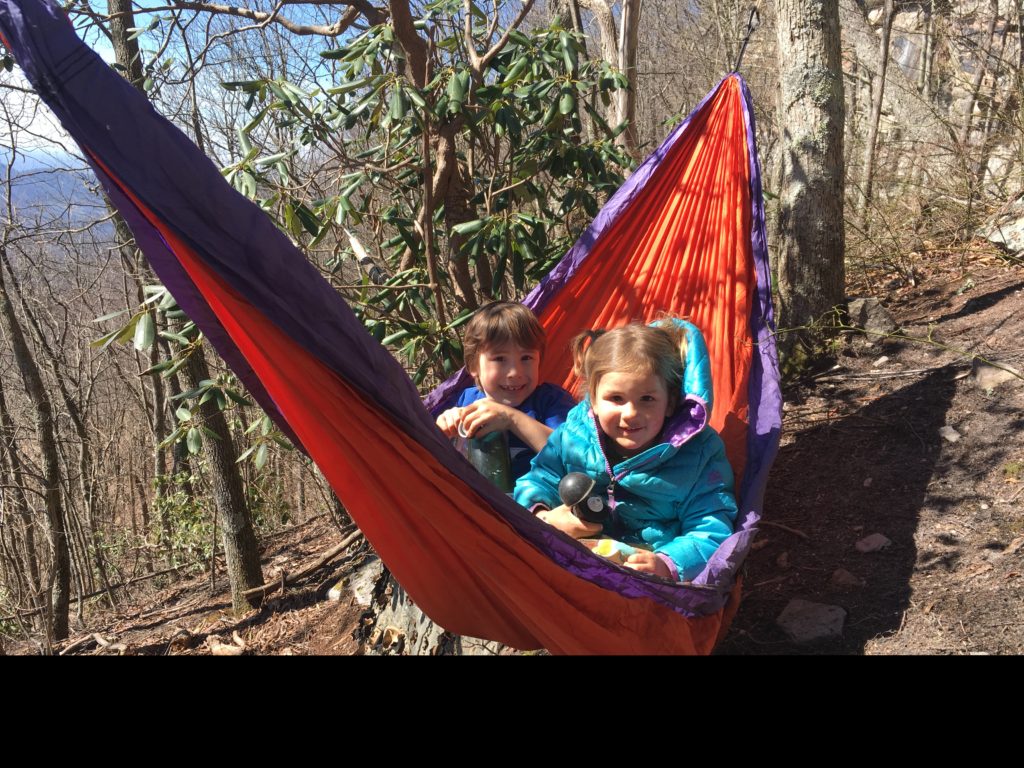 Our first day was a little lackluster by way of performance, but still a great day out in the woods.  There was plenty of sun, but temps on the mountain never got above 40, so cold hands were a common theme on any rock that was even close to being in the shade.  A favorite moment for the cragkiddos was the group of fighter jets that boomed across the valley mid-afternoon (I’m glad it wasn’t naptime, because the sound was deafening!!!)  They also marveled at the giant icicles hanging (rather treacherously) atop many routes.  As the day went on, more and more were melting and dropping off, so we had to be be extra vigilant about where the kids could play, and looking up before we sat down!  Routes climbed: Oregon Trail 10c, Farley 9, and Spurs 10c. 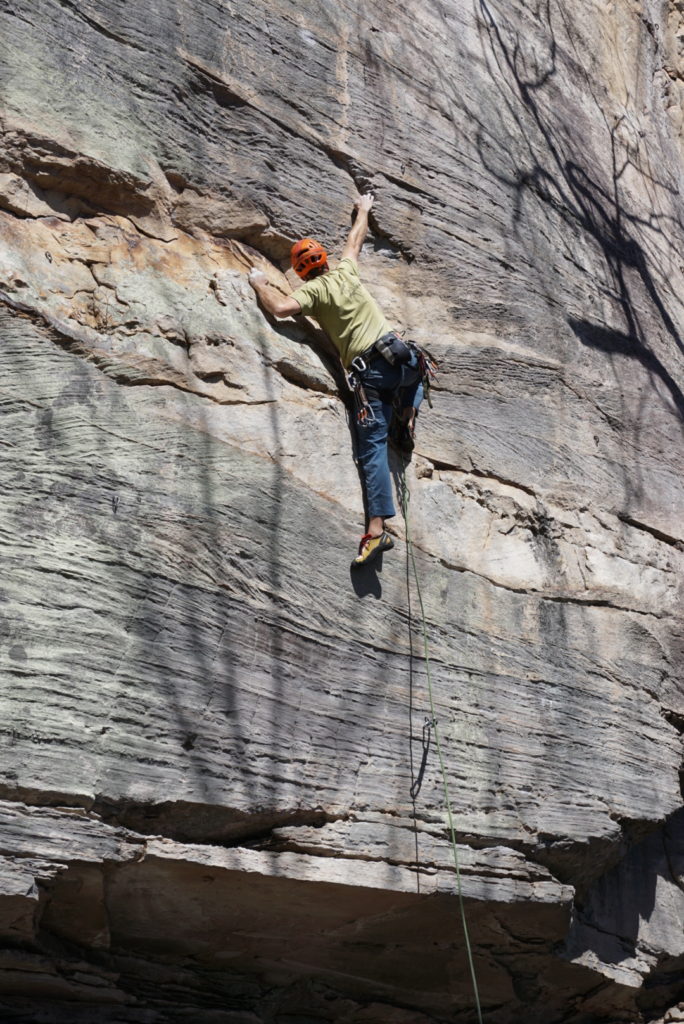 CragDaddy making a long reach on Flavored with Meat 12a

The next morning brought more warmth than we’d seen at any point the previous day, so we hiked back in to the crag in higher spirits and less layers!  At a new crag it’s often hard to get your bearings and know where to start – what’s good, what’s not, along with the adjustment to a different type of rock, so our second day was definitely a more informed one.  Group consensus was that everything Day 2 overall was far better than Day 1!  Routes climbed: Tidy Bowl 10a, Mooning 11a, and Flavored with Meat 12a. 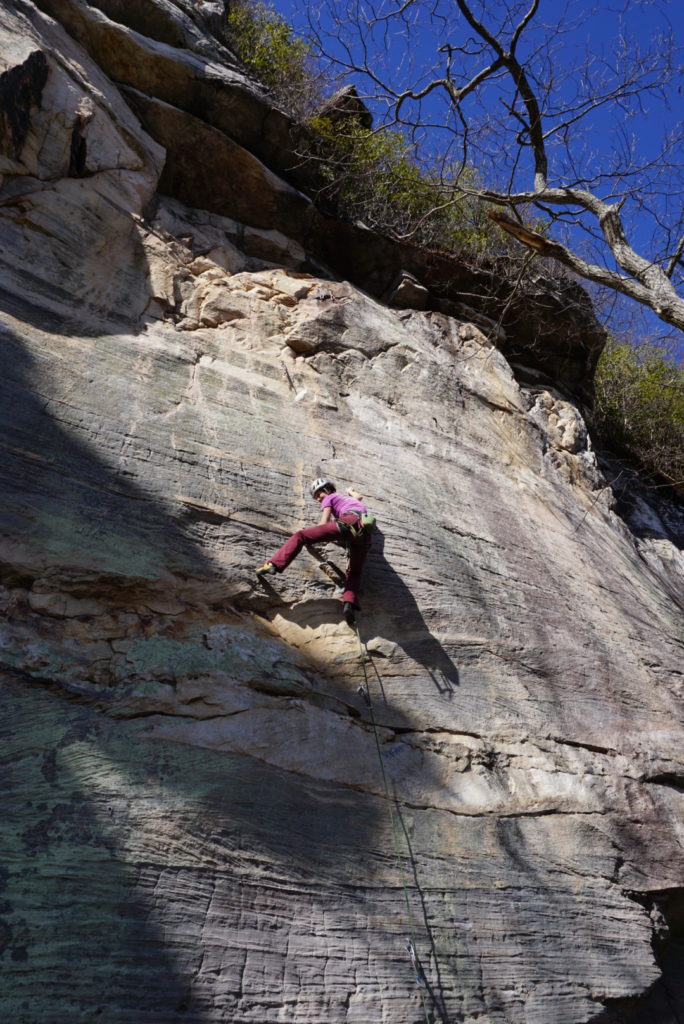 Flavored with Meat was a route that I’d had on my radar ever since I unwrapped the new guidebook on Christmas morning and saw Monica Browne styling it on the cover.  The rock was just as impressive in person.  Day 2 was the CragDaddy’s day to hang draws, and he definitely took one for the team – not only because the key holds were pretty hard to find without chalk, but because 2 out of the 3 distinct crux sequences put tall people at a disadvantage, due to the high feet and compact movement.

I, however, truly enjoyed the chance to get put my feet at my face and get all scrunched up on microscopic holds…without having to get creative to make a crazy reach!  However, it seems like I always have a hard time summoning my “try hard” at the start of the season, so my first run was pretty lazy.  I had no trouble with the moves, but I pretty much went bolt to bolt.  When I got to the top, I rehearsed a few of the sequences on lower and linked most of it…and it was like something clicked in my brain.  My wishy-washy psych level soared, and I couldn’t wait to get back on it again.  My next go I executed every single sequence incorrectly at one point or another…but I sent.  It took CragDaddy’s tall, +3.5 ape index frame 2 more burns to send, but he snagged the tick just as the sun was turning the corner of the cliff.

We hiked out brimming with excitement for a new season of adventures, and the satisfaction that comes from spending a weekend in the mountains with family and friends.  Hidden Valley is definitely worth adding to our arsenal of spring climbing destinations, so stay tuned for more! 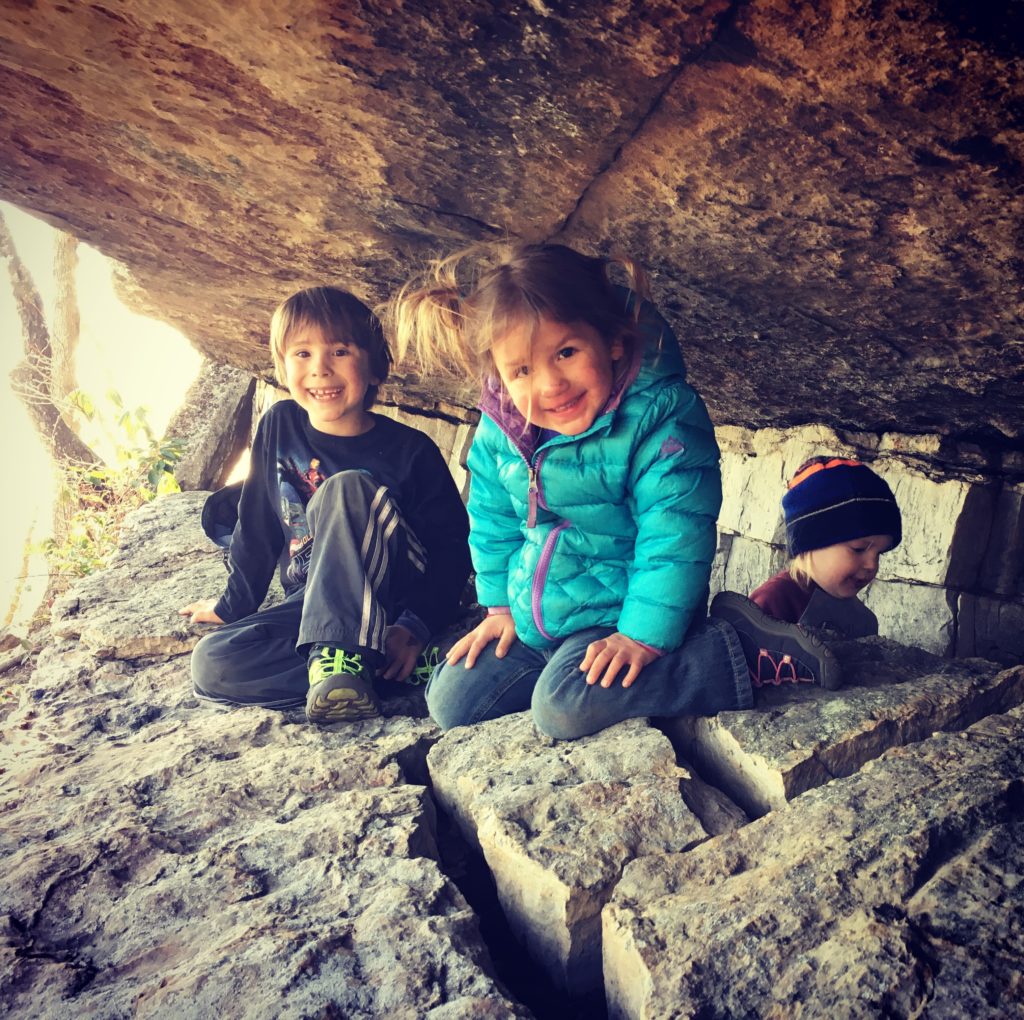