This week has been a rough one as I have been nursing a toddler with a bad case of the throw ups (see below), while trying to manage some bad spasms in my lower back.  That being said, writing a trip report has been fairly low on the priority list, but the blogosphere has granted me about an hour to bang one out tonight, so here goes.  Our weekend can be summed up pretty easily in 3 distinct parts, as noted in the title.  I’ll tackle them in order… 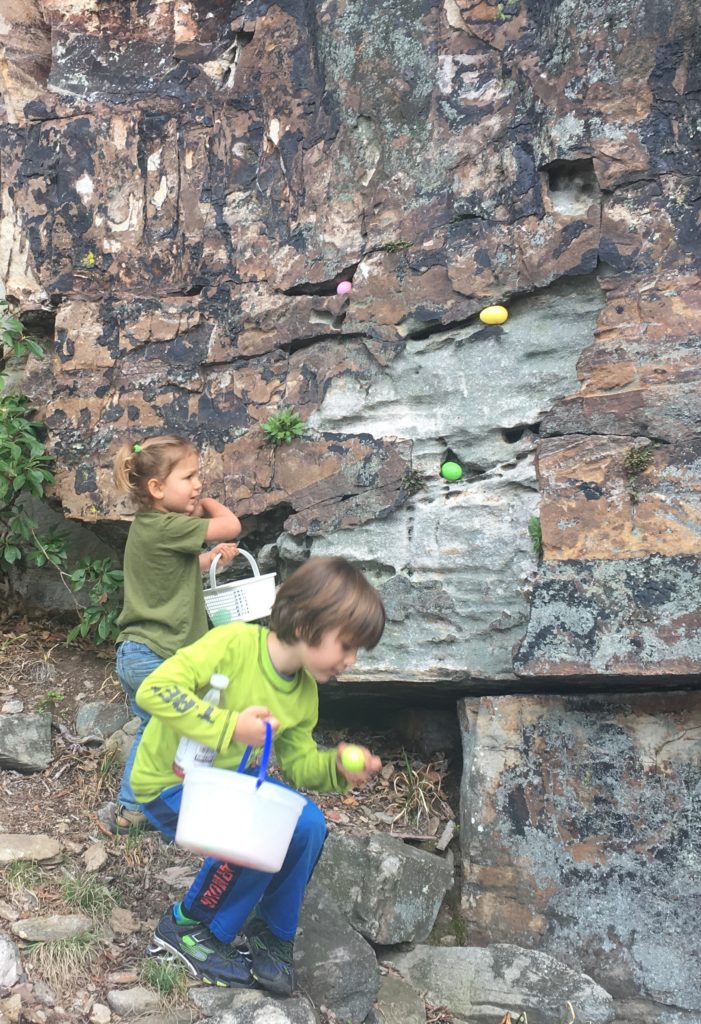 It’s been our family tradition since 2013 to have an at-the-crag Easter Egg Hunt.  Although it’s somewhat of a pain to drag buckets of plastic eggs everywhere throughout the day, the kids look forward to it so much that we just can’t say no.  And this year, we crammed everything into Big C’s backpack anyway, so really the only trouble was keeping track of the exponentially larger explosion of kid stuff at the base of the cliff.  In previous years Little Z has been too little to really “get it,” and aside from placing a few token eggs pretty much directly in front of her, she didn’t really participate.  This year, however, she was READY.  We’d already gotten a decent amount of “hunting” done at friend’s and family’s houses, so she was anxious to step up her game.  After all, at-the-crag egg hunts are not for beginners; a good egg hunter needs to be willing to look inside holes that potentially house creepy-crawlies, and able to scale rock faces (with a grown-up spotter, of course!)

Another Easter tradition we have at the crag is bringing resurrection rolls for any and all who would like to partake.  It’s nothing more than a crescent roll with a sugar and butter coated marshmallow melted inside, but the hollow result makes for a great visual of the empty tomb for the kiddos, and great sending treats for all! 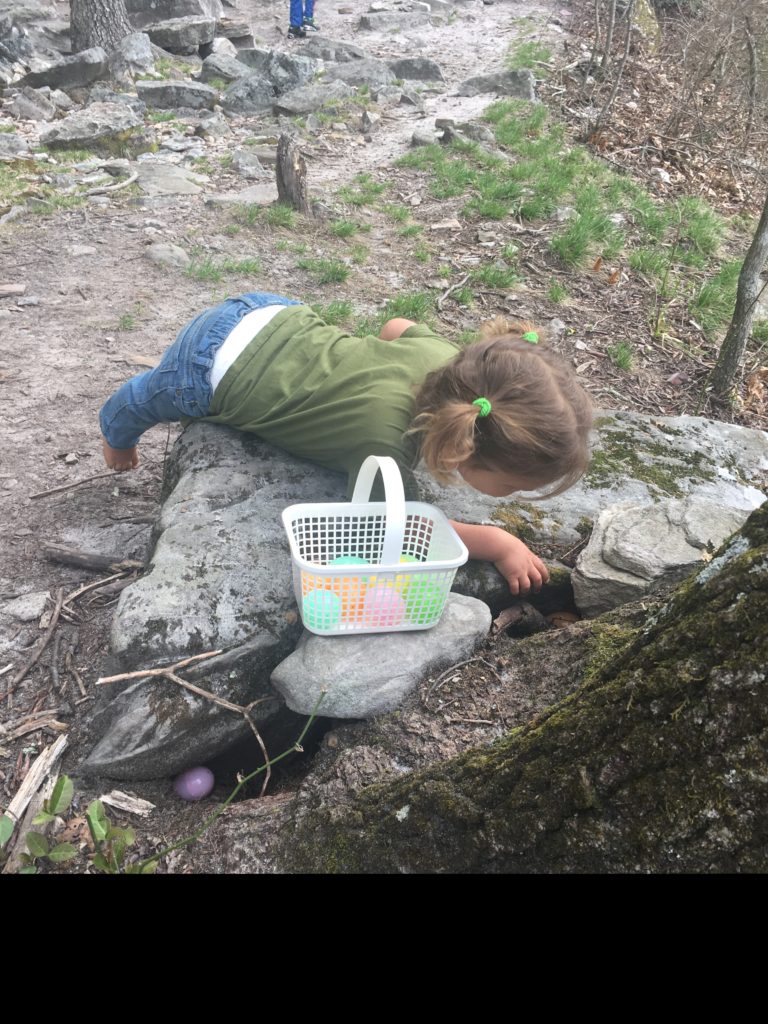 As you probably have guessed, our weekend also included a bit of climbing…though not nearly as much as we’d originally intended, but the classes we’d been attending at Marianne Wells Yoga School gave us hope. In between egg hunting and resurrection roll eating, we managed to squeeze in 4 pitches, only 2 of which are worth mentioning.  Pocketful of Rattlebugs 11a is potentially the best of the grade at Hidden Valley – definitely do it if you are in the area!  It’s a pocket-pulling, finger-locking good time if I ever had one – AND it stays dry in a downpour!  I ended my day on Gristle 12a, a steep, juggy line with a hard boulder problem at the top.  It took me quite a while to finally make the crux move, but I eventually got it worked out.  That one move is really hard for me, and I know it would be even harder coming in hot on point…but I always tell people that you never get a good picture of how close or far you are on a route until you give it a second go, so I should probably take my own advice and hop on it again next time.  Why didn’t I just get on it the next day, you wonder?  Well, that brings me to the final piece of this post… 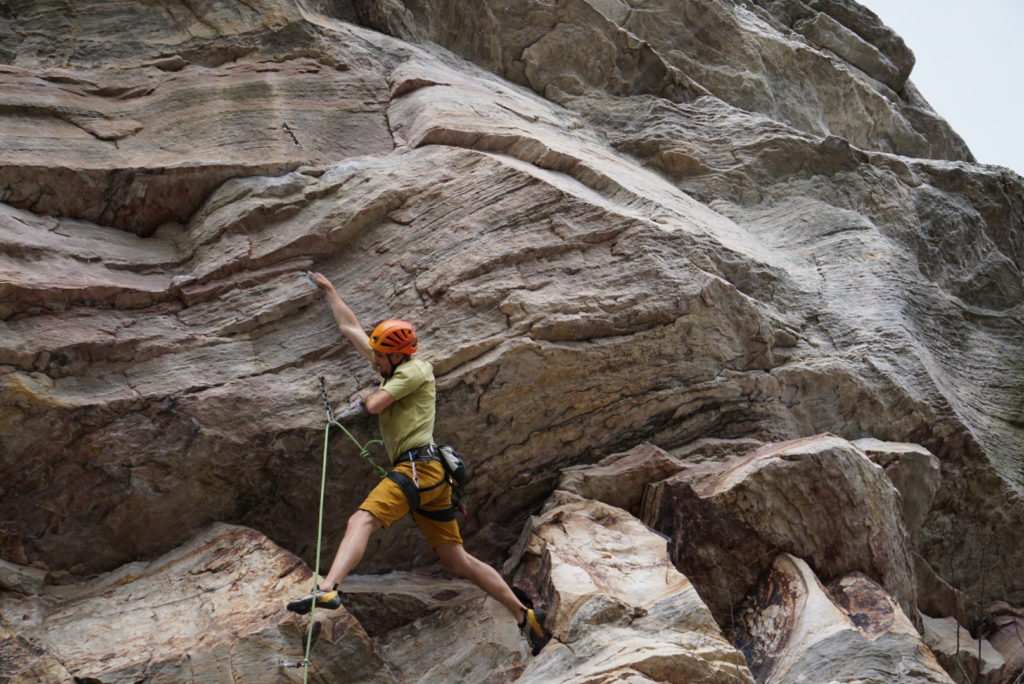 CragDaddy starting the business of Gristle 12a

The Car Ride From Hell –

To get the full effect, we need to back up a bit.  CragDaddy and I had gone up to Hidden Valley for the weekend knowing we didn’t have any extra partners for Sunday to help with the kiddos, but we were up for going for it.  After all, with Little Zu being 3 now, we are sooo close to being able to fly solo, so long as we are at a kid-friendly crag (ie flat, safe base with no drops/water hazards/etc),  In fact, the past few times we’ve been out, there have been times that the kids have been so engrossed with playing with each other, they’ve hardly noticed whoever was on “kid-duty.”  Ironically enough, however, we DID actually run into some friends at the end of Day 1 with whom we made some symbiotic climbing plans with; the wife was 35 weeks pregnant and obviously not wanting to  catch lead falls.  Our mutually beneficial plan would have worked out great I’m sure, except that when we arrived at the base of the cliff the next morning, Little Zu promptly began puking her guts out. 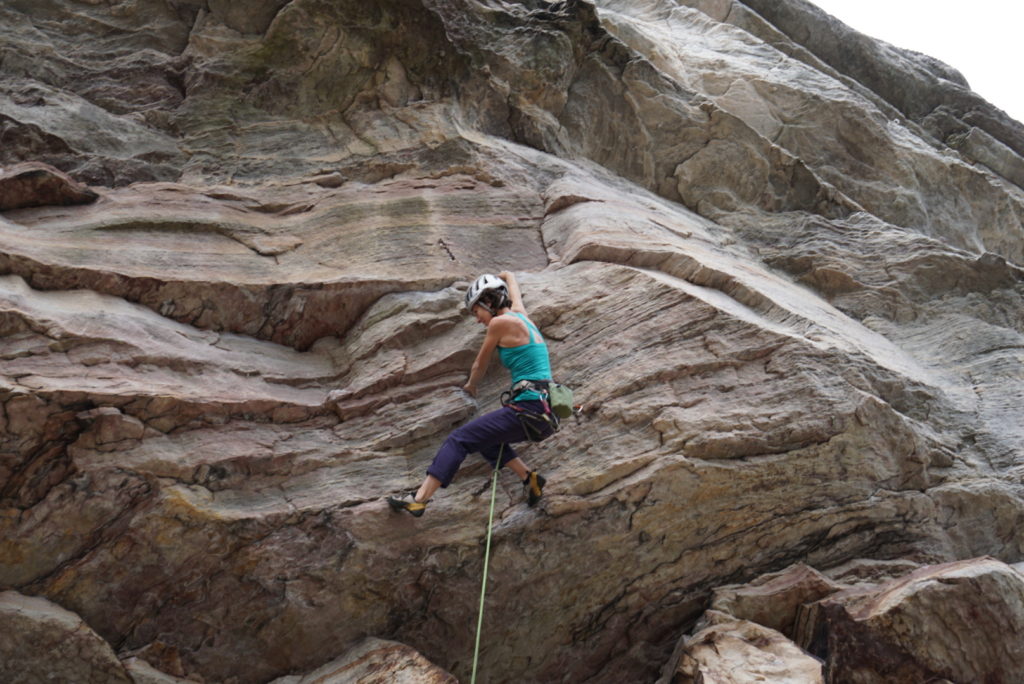 Just before the crux, Gristle 12a

I will spare you the details on the off chance you are eating dinner as you read this, but let me say this – if you think throw ups are gross at home, multiplying that grossness by a factor of 10 pales in comparison to what happened over the next 5 hours.  By the time we got back to the truck, Little Zu had gotten vomit all over herself, all over me, and all over the backpack carrier. We had new seats which heat up and it crossed my mind that the liquid might damage them, but luckily that was not the case. Thank heavens for the Easter Egg bucket that we were able to re-purpose as a barf bucket in the car, otherwise the car situation would have been FAR worse.  Still, I lost track of how many times we had to stop to change her clothes, but we were averaging every 15 minutes or so for most of the drive, save the hour or so that she was able to sleep some.  By the time we got home, we were digging Big C’s shirts out of the dirty laundry bag, because she’d exhausted all of her extra clean clothes, her previously dirty clothes, as well as Big C’s extra clean clothes (there was a certain big brother who was NOT thrilled about sharing, but you’re never too young to learn what it means to “take one for the team.”) 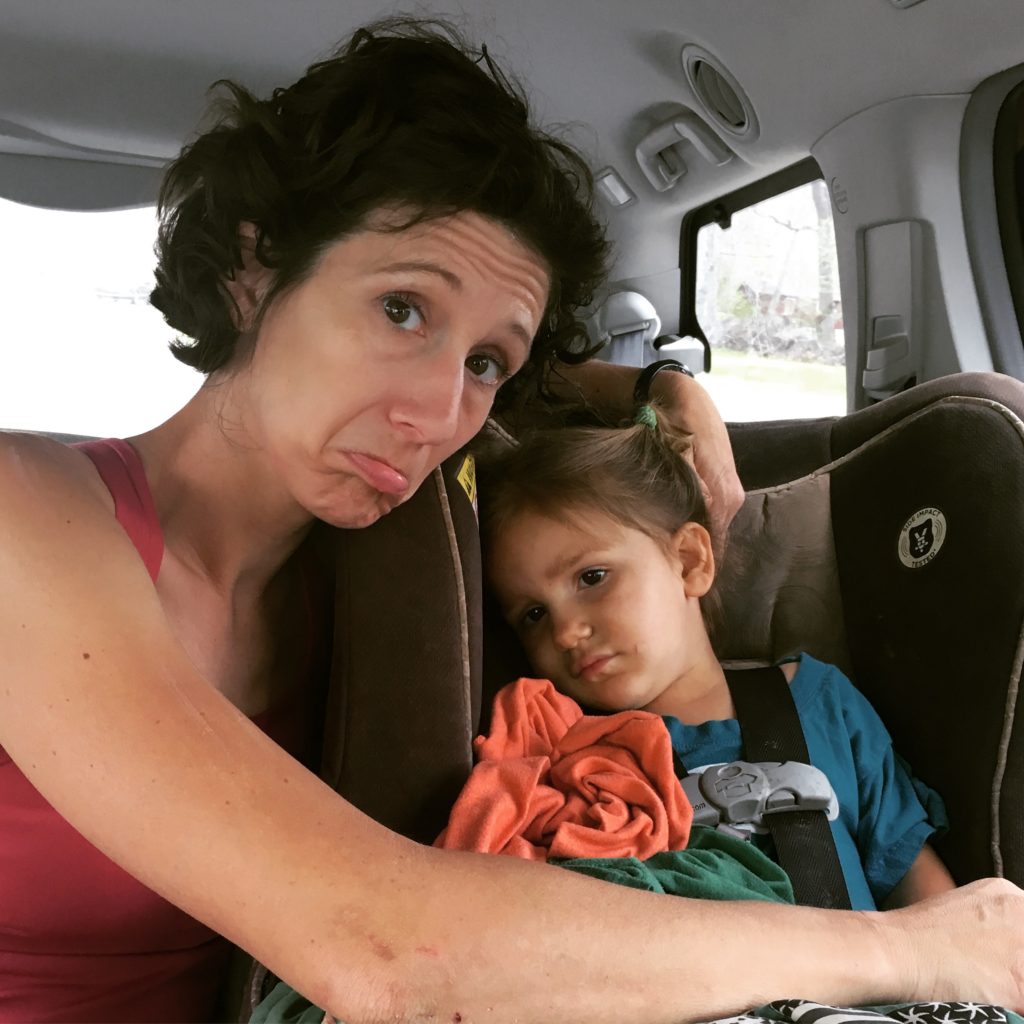 Somehow during this whole debacle, I did something terrible to a muscle in my back.  CragDaddy hypothesized that it happened when I got my foot stuck in the seat belt while making a dive into the backseat, bucket in hand, in an attempt to catch a particularly projective-esque episode that had woken poor Z from a seemingly sound sleep.

After a puke-free Sunday night and Monday, we thought she was in the clear, but Tuesday featured a reprise that, although milder, still made for a rough day.  Today, however – she woke up ravenous and has been eating all day and keeping everything down, so maybe NOW we’re in the clear?  For her at least…

Meanwhile, in between chiropractor visits, vitamin I, yoga stretches, and massages from the CragDaddy, my back has been slowly but surely loosening up.  I climbed on it yesterday, and it didn’t bother me at all – right now it just hurts if I’m standing up for prolonged periods.  I may not be at my best, but I’m optimistic I can at least bring SOME try hard to the Tuck Fest Deep Water Solo competition this Friday night (!!!)  That is, provided I’m not sidelined with my own barf bucket in the event my darling daughter decided to share her germs despite all my best efforts at disinfecting and quarantining.  So far so good, but it’s too soon to say…wish me luck!