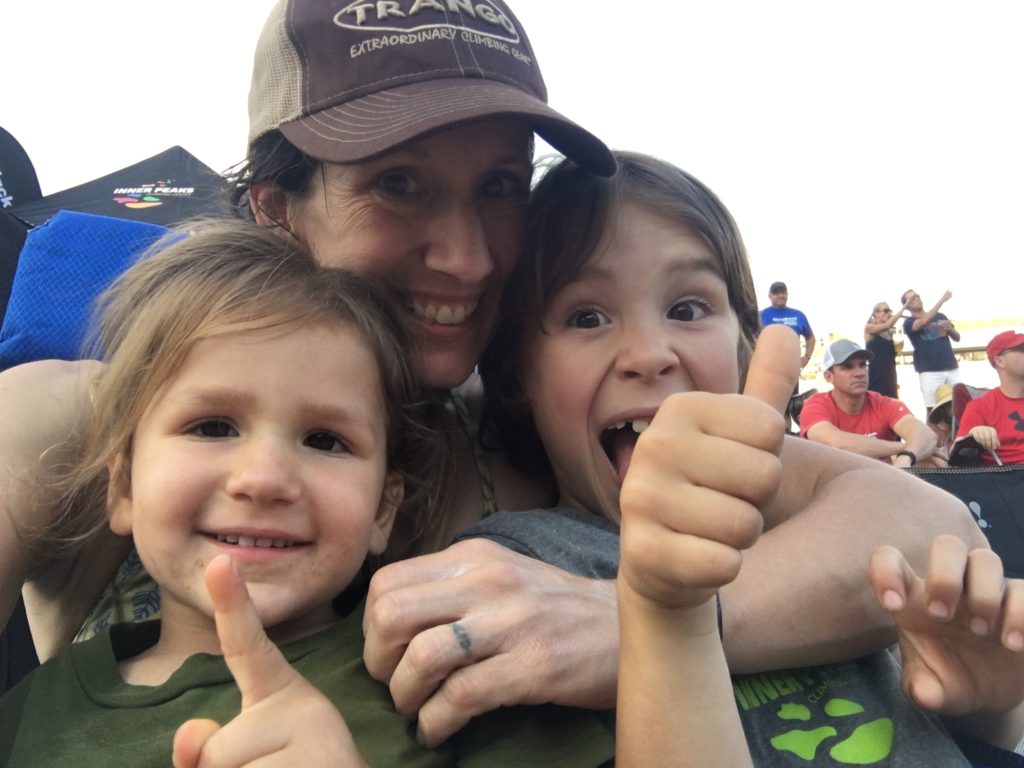 Two of my biggest fans. The little one cried every time I hit the water, while the big one kept requesting a cannonball finish.

It probably goes without saying that this week’s “Tuck Fest” post is far more fun to write than last week’s “Puke Fest” one. It’s an understatement to say that my days leading up to the Tuck Fest DWS comp consisted of a lot more “momming” than training.  By the time Friday afternoon rolled around, I really didn’t know what to expect, but while I was a bundle of nerves, I was pretty thankful no one in our family was throwing up.

The DWS facility at the US National Whitewater Center is the first and only permanent structure of it’s kind in the WORLD.  Couple that with the $15,000 purse up for grabs at the podium, it’s no surprise that the best competition climbers in the country showed up.  Considering that neither of those adjectives describe little old me (literally old…I was twice the age of most those girls!), I was actually just thrilled to be invited, and my goal was pretty simple – to try my hardest and savor every moment of the experience!  Here’s the play by play…

QUALIFIERS: (aka “qualies,” which is what the cool people call it…)

My friend Joe and I were the very first to check in, which meant we were the VERY first on the walls.  Personally I was psyched about that – the comp was an onsight format, which meant that we weren’t allowed to see anyone else on any of the routes before it was our turn.  So, in my mind there was no advantage to sitting in isolation getting more and more nervous by the minute… 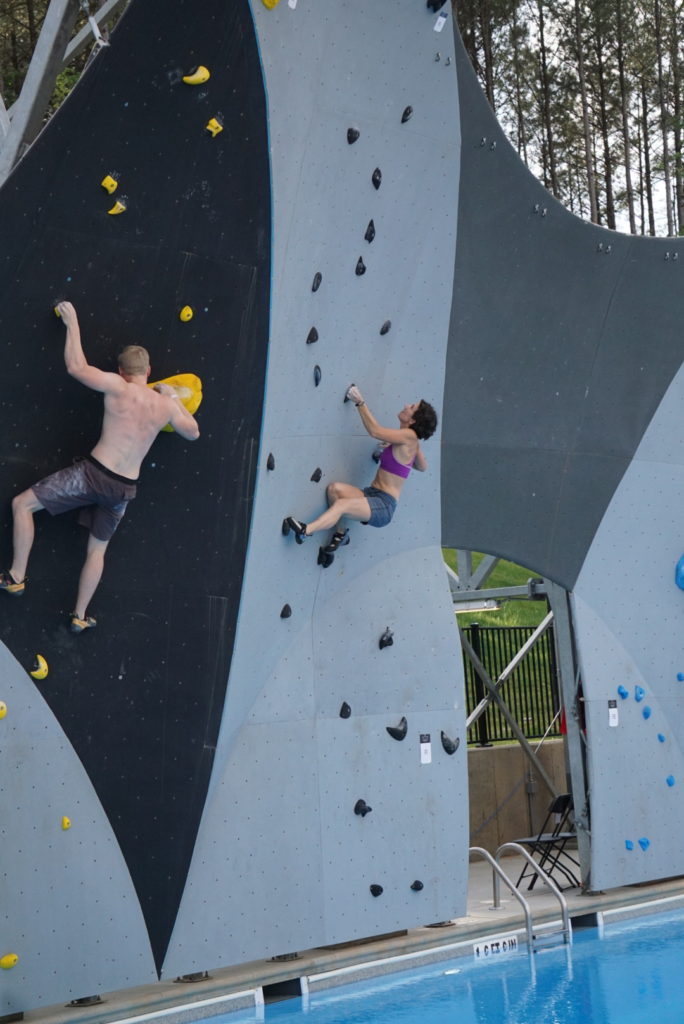 Joe and I getting in the groove on our first routes.

Once qualifiers started, climbers were moved through 6 routes on the wall (3 for men, 3 for women) like an assembly line, so there wasn’t any time to think.  We had 2 minutes to climb, then 30 seconds to get out of the pool, 2 minutes rest, then 30 seconds to get to the next route’s start holds, and on and on like a well-oiled machine.  In fact, by the time I toweled off, changed shoes (it’s hard to take off wet climbing shoes!!!!!), and chalked up, it was time to get in position to go again.  From touching the first starting holds of route 1 until splashing down after route 3, only 8 minutes had passed!

My first route went really well.  I sent it pretty easily, and felt a surge of confidence coming up out of the water.  I also felt a surge of breathlessness – every time I hit the water the wind got knocked out of me, and swimming to the side of the pool (in climbing shoes), was actually pretty difficult.  But what a rush!  Route 2 was a little harder, and I stalled out a little at the beginning, but finished up the rest of it without any issues.  Route 3 was the hardest of the bunch, and taller.  There were multiple cruxes, and it took me a long time to figure out each, but I managed to make it til the second to last hold before punting off!  I exited the pool swirling with excitement, very happy about my performance.  As the night went on, however, I started to realize that I’d done even better than I’d initially thought; By the end of the night, I was in 12th place, which meant that I got to move on to the finals on Saturday!!!  FYI, you can watch the whole qualifying round for free from start to finish on the Floclimbing website found here, since I was lucky enough to climb first, it’s pretty easy to pick me out!  (You can also watch the finals…but ya gotta pay for it!)

At this point, most of the nerves from the night before had melted into giddiness – as far as I was concerned, earning a spot in the top 16 was the best possible outcome I could have imagined.  In my mind, the hard part was over, and I was grateful to still be along for the ride. 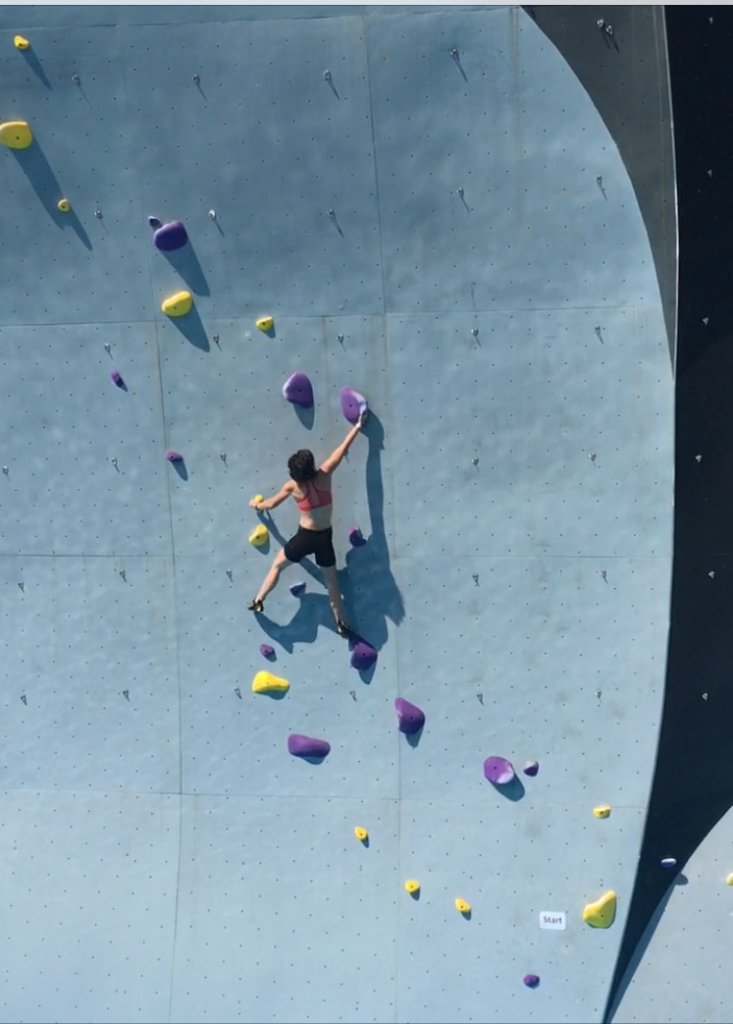 Seeding round was a lot different than qualifiers – more low-key in logistics, but stiffer in competition.  We got 2 chances at one route, waiting back in isolation behind the wall in between turns.  We did get to preview it though, and I took one look at the route and knew I was out of my league.  The wall was steeper, and the moves were bigger.  Much bigger.  We were CLEARLY not in qualifiers anymore…

Turns out I was up first…again.  I crept out to the start holds, reeeaalllly hoping not to be the total dork that falls in the water before I get there.  Try hard.  Go big.  I kept repeating that mantra to myself as I carefully made my way up to what I had identified in my preview as the first crux.  Maybe the span between holds wasn’t as big as it looked? I set up on the holds underneath it and stared down a pair of purple holds that may as well have been a mile away.  Nope – still huge.  I finagled my feet here and there, trying to get set up to make the lunge.

Let me back up for a moment…I’m an outdoor climber who prefers long, technical routes that require far more technique and mental strength than physical strength.  Not to say that I don’t train power – I feel like I’m CONSTANTLY working to improve my ability to make big moves…but power is not a natural strength of mine, and is always lagging behind in my personal repertoire of climbing skills.

So back to these big purple jugs.  I knew my body didn’t have the coordination to just let go and leap, but it looked like I could potentially deadpoint the move and not have to dyno. (Non-climber translation: “deadpoint” is a lunge move where at least one body part stays on – you’re feet cut AFTER you’ve hit the next hold, or one hand stays on the whole time, as opposed to a “dyno” where all body parts are off the wall for a split second.)  Though not at all sure I’d have the arm span,  I sank down low on the holds, paused briefly, then lunged….AND I STUCK THE HOLD!!!  It made a loud slapping sound, and it took me a few seconds before I realized that I was still on the wall.  I kept going, but got stalled out and eventually fell just a few moves later.

One move away from my high point at seeding. Photo cred: Bryan Miller of @fixedlinemeda

Turns out that move was a not-so-biggie for all the serious competitors, as there were only a handful of climbers that fell before my high point.  In fact, the majority of the women completed the entire route on both of their attempts.  But for me, onsighting that move was huge, and was potentially one of the hardest moves I successfully completed all weekend, so I walked away both satisfied as well as motivated.

My mediocre performance in the seeding round landed me in 13th place for finals, which pitted me against nationally-ranked Atlanta climber Tori Perkins (seeded 4th) for the head to head final.  I’d seen her crush the seeding round, and was fairly certain I was about to be obliterated.  But I just couldn’t stop smiling – I knew I wasn’t going to win, and so did the 1000+ people out on the lawn spectating, so there was absolutely no pressure!  Not surprisingly, I got knocked out in the first round, although it ended up being a far closer match-up than I’d originally anticipated.  But oh what a thrill to be able to tackle that big wall in front of a cheering home crowd!  I am so grateful for the opportunity to be there and do my best to represent the home team! 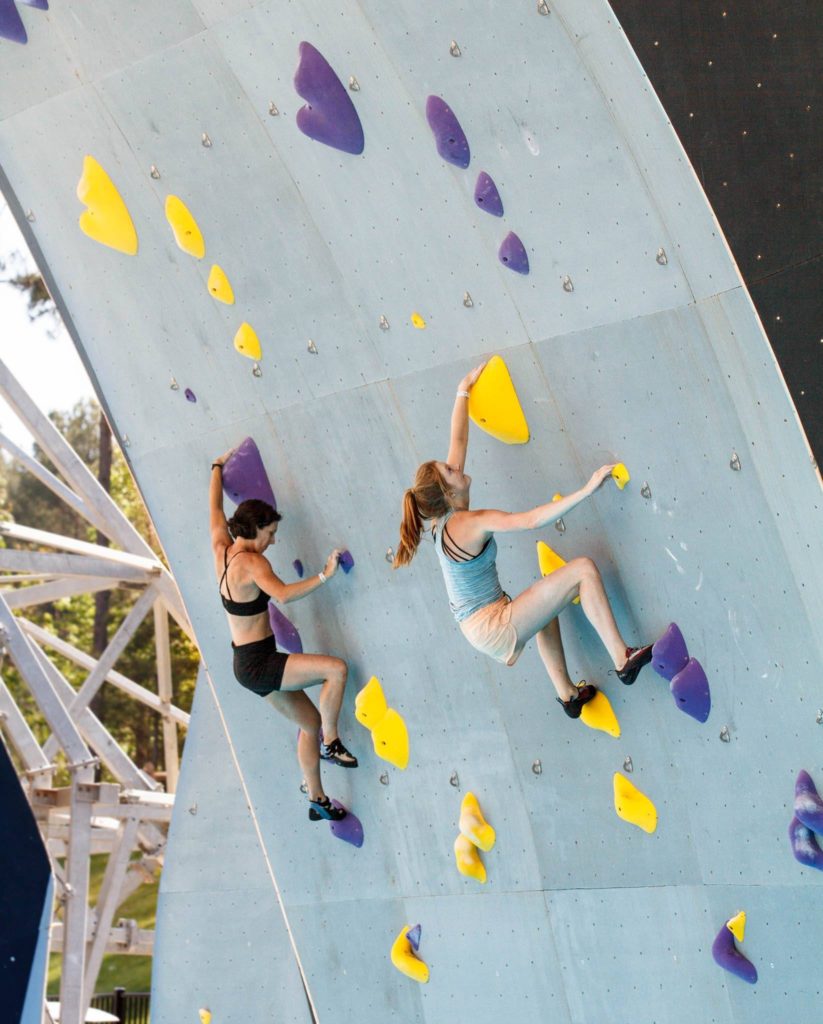 In reflection, it was very interesting to experience a completely different form of climbing than what I’m used to.  Comparing outdoor rock climbing to competitive gym climbing is probably like comparing back country skiing to slalom racing…the skills sets are similar, but they really are two very different sports, and only the best of the best can be good at both at the same time.  I have a lot of respect for these little girls with far superior strength, power, and route-reading abilities than I could ever hope to have. (seriously for a couple of them, I’ve been climbing longer than they’ve been alive!)   As far as the competition scene goes though?  They can have it.  It was novelty fun for me, but I’ll take real rock any day over plastic…although jumping into a pool might sound pretty refreshing come summertime!  But for now, I’m looking forward to getting back to regularly scheduled programming this weekend!