If I could pick one word to sum up spring climbing season this year, it would be “rain.”  We just can’t seem to buy any sun around here.  The good thing about that is that we haven’t had grueling hot temperatures.  The bad thing is that we’ve been limited as to our climbing destinations.  For example, we have been to the New exactly ZERO times in 2017.  Meanwhile, we just got home from back to back 3 day weekends at the Red, which we have never even considered doing before.  Don’t get me wrong, the Red is awesome…but the 6+ hour drive with two (sometimes screaming) banshees to get there is decidedly not as awesome.  But desperate times call for desperate measures…and it was totally worth it! 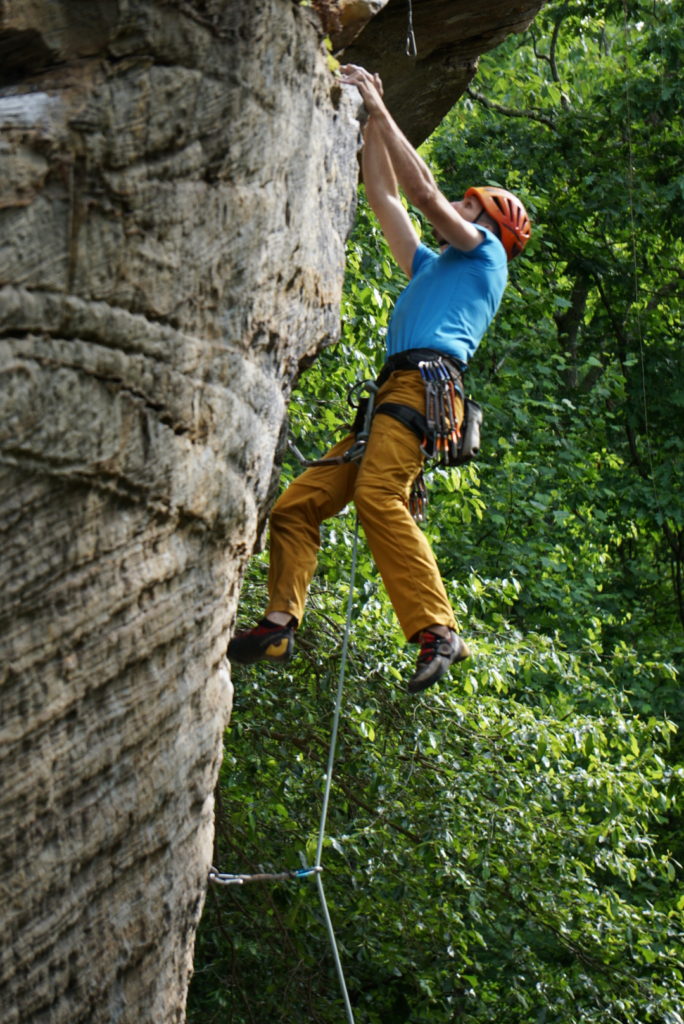 The nice thing about a back to back affair at the Red was that for Round 2 we didn’t have to waste half a day getting our “Red mojo” back.  Since steep climbing is typically not our thing, it’s not uncommon for our first couple of RRG routes to feel discouragingly pumpy.  But this weekend marked the first trip in years that neither of us punted off the warm-up on Day 1.

Since we were originally thinking we weren’t going to be rolling in until after 10, we booked a room at Lil Abner’s Motel for the first night, figuring that transitioning sleeping kiddos to a bed would be far easier than setting up the tent and risking everyone getting fired up with a second wind long about the time CragDaddy and I were ready to crash…but our plan backfired.  It started out well – CragDaddy actually got away from work earlier than expected, we hit very little traffic getting out of Charlotte, and our dinner stop was quick.  But then came the fatal error when Z fell asleep at 6 pm.  At first we didn’t think it was so bad – she had woken up early that morning, and had skipped the car nap, so an earlier than normal bedtime perhaps made sense.  But when she woke up again 2 hours later and it was still light outside, it became apparent that in her mind she was waking refreshed and rejuvenated from a restful slumber, and was ready to rock and roll the minute she got to stretch her legs. 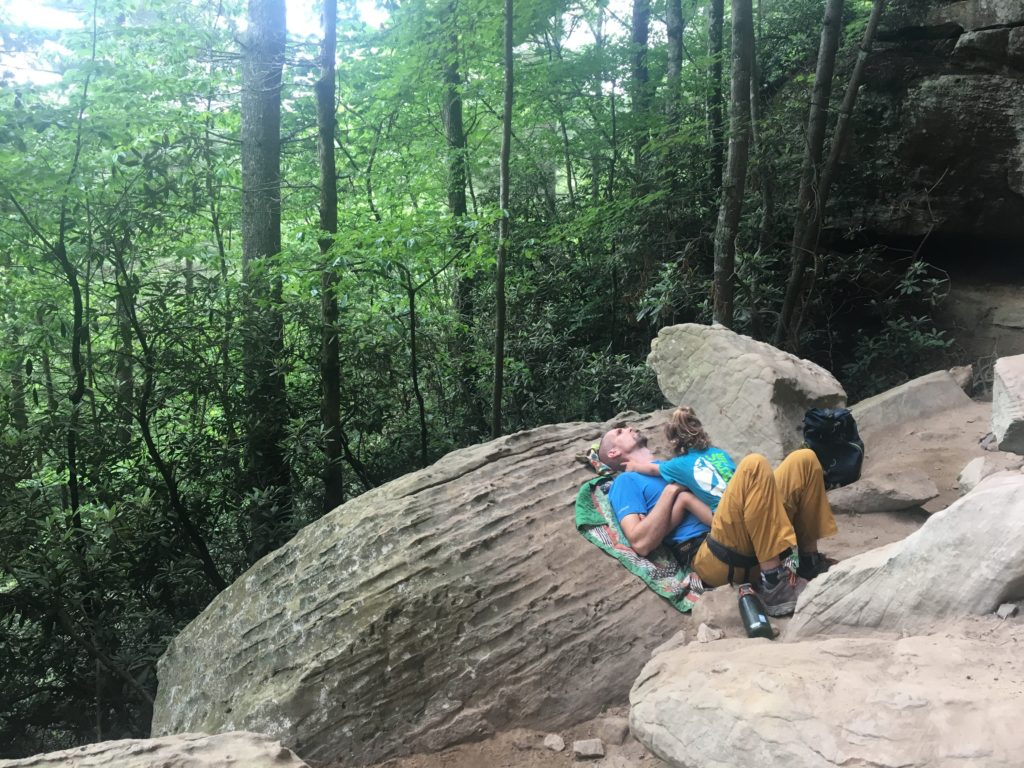 CragDaddy gets some Little Zu love in between climbs!

The good news was that the early arrival meant CragDaddy could go ahead and head to the LOTA campground to claim our favorite spot for the giant orange dome otherwise known as our tent, which saved us from setting up in the rain the following day.  The bad news was that both kiddos stayed up far too late and everyone went to bed annoyed with each other…in fact, I’m pretty sure that Little Z was the LAST one out of all of us to finally close her eyes.

But kids are kids, and regardless of who slept or didn’t sleep, we still woke up at the Red River Gorge psyched to climb!  Day 1 was spent at Roadside, where our friends Dino-Mike and Sarah hopped on Ro Shampo 12a, resulting in a send for the former, and a first 5.12 lead for the latter! CragDaddy and I warmed up on Pulling Pockets 10d, then tried our hand on Tic-Tac-Toe 12b (awesome…but super hard boulder problem at the top!), and The Return of Chris Snyder 11d (a loooooooong journey through never-ending juggy pockets.)  We ended our day with a casual romp up Just Duet 10d, a super fun slab which was actually CragDaddy’s first onsight of the grade way back in the day.  No sends for us on anything hard, but good times all the same. 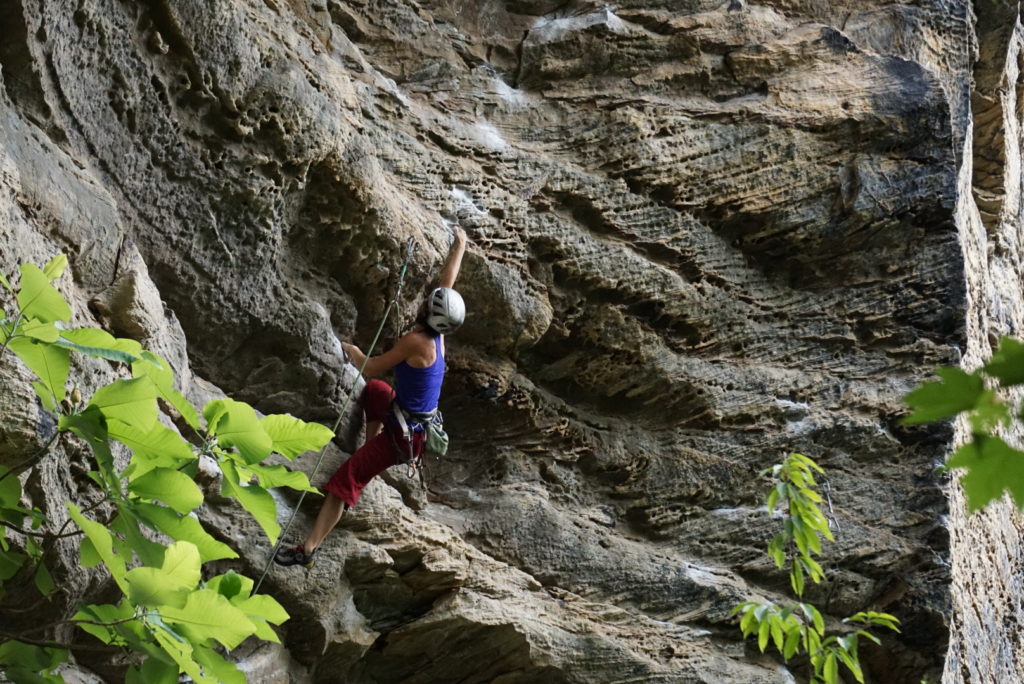 Me going big on Super Best Friends 12b at the Solarium. Photo cred: Michael Chickene

Day 2 dawned surprisingly dry, as it had only briefly rained the night before, and the storms that had been originally forecasted throughout the day had been pushed back to the afternoon.  We headed to the Solarium at Muir Valley, which has always been one of my favorite places to climb.  Every route I’ve ever been on there has been awesome, and I still have lots more to try.  I warmed up by going bolt to bolt on Super Best Friends 12b, an incredibly steep line that I’ve been intimidated by/wanting to try for years.  The moves were actually not nearly as hard as I was expecting…though putting them together would pack more of a pump than I can currently handle, so I only gave it the one go. 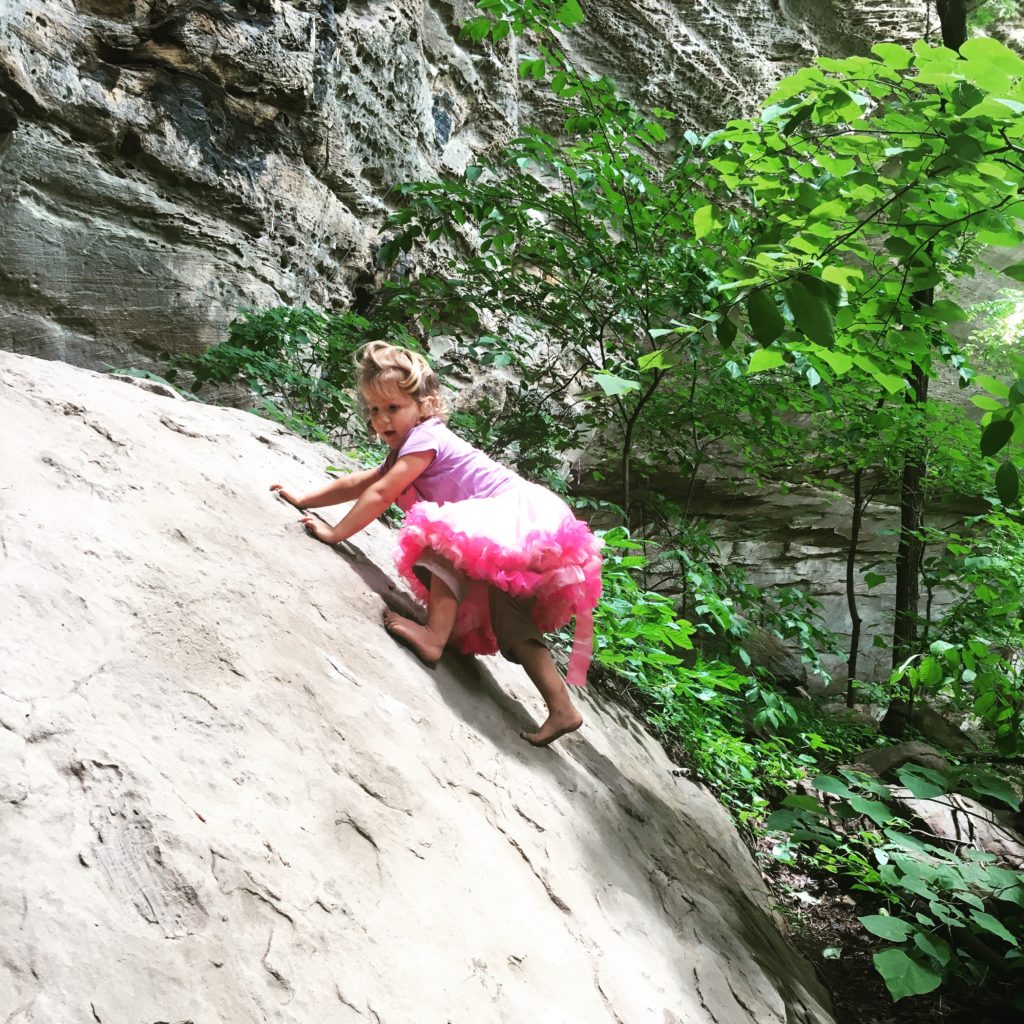 This picture embodies so much of what I love about my little girl – strength, happiness, femininity, and no fear of dirt!

There were LOTS of folks at the Solarium, so in order to get more climb time I turned my attention to one of the less travelled lines – Magnum Opus 12a.  For all of my strong boulderer friends, this one is considered a gimme…the business is all in the first 25 feet, with what basically amounts to a 75 foot victory lap atop a sit-down ledge.  But “the business” sure is hard!  Sequency power moves on 2 finger pockets and underclings, culminating in a toss from a pair of sloping crimps.  I had tried it one other time last year, then quickly gave it up in favor of Galunlati 12b and Mirage 12c, both of which for me personally seem far easier!  This time though, the moves actually felt doable.  I pieced it together pretty well, then my next attempt managed a one-hang with a fall mid-crux.  My 3rd go felt like it was the one- I powered through, feeling pumped yet secure, and was ALMOST out of it, when I slipped off one move before the big toss to glory.  My 4th go was dismally tired, so even though it was still early, I knew it wasn’t my day.

CragDaddy, on the other hand, finally got revenge on Abiyoyo 12b, a line that has haunted him for almost a year.  On previous trips, he has fallen SIX times after the crux, once a mere 10 feet from the chains, on terrain that was no harder than 10a.  But not this day.  While it may not have been mine, today was most certainly his day – he sent 2nd go making it look easy peasy, nabbing his 50th lifetime 5.12!  Woo-hoo! 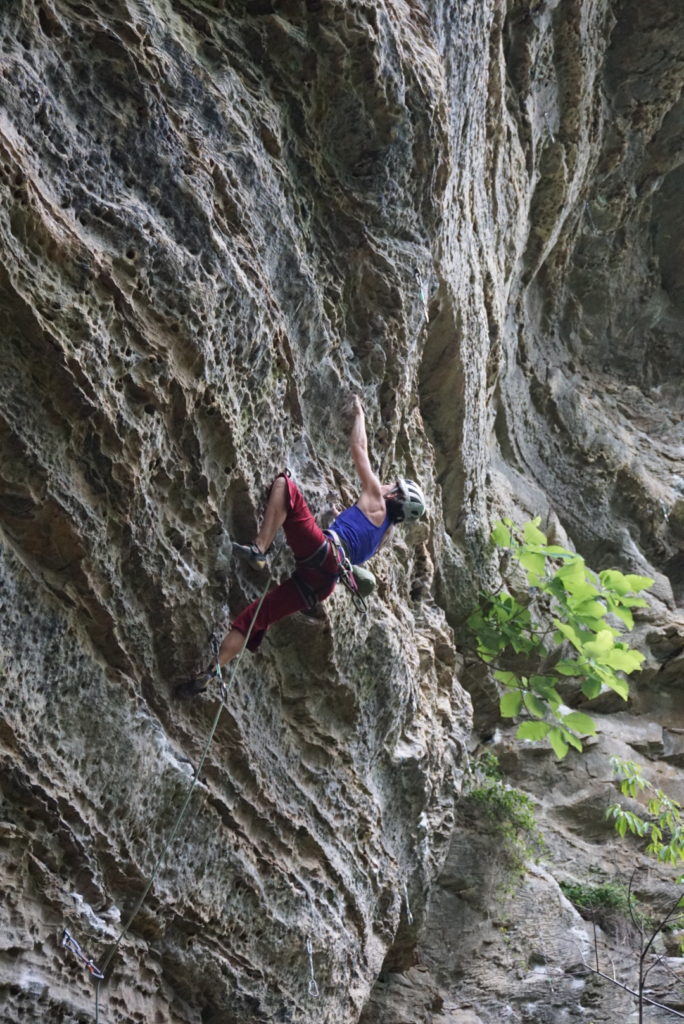 Day 3 I was determined to tick a 5.12 of my own.  After much discussion, the crew had settled on climbing at Drive-by Crag, so I decided to warm-up on Naked Lunch 12a.  Based on the description, it seemed like it might be a good fit for a last day (5.10+ steep climbing to a short-lived crimpy crux at the chains.)  I gave it my best onsight go, but fell trying to get the last bolt clipped.  I’m gonna blame it on the seeping water streak to my left.  None of the key hand holds were soaked, but they were definitely pretty manky, and I had to do a lot of extra maneuvering to keep my feet dry.  I actually stick-clipped the top so I could try to safely navigate a way around the seepage, and eventually got it worked out.

Meanwhile, as I was awaiting my next turn, the sun was working it’s magic.  By the time I went up again, the manky holds felt much better, and a very key foot jib was now dry.  My Day 3 guns weren’t firing on all cylinders, but like most end-of-trip sends, the battle was probably won more out of sheer determination rather than physical strength.  Rule #1 of Redpointing = just keep climbing!  After giving CragDaddy the complete beta spraydown, he managed to claw his way to the chains as well, claiming the flash (and keeping our individual 5.12 counts within 5 of each other… but who’s counting 😉 ).

I ended my day on what is perhaps my new favorite route at the Red – Hakuna Matata 12a.  I’d wanted to squeeze in one more pitch on the weekend, and another party graciously let me jump on their draws while they were resting.  This line is amazing – steep and pumpy enough to belong at the Red, but technical and crimpy enough it could easily fit in at the New.  Probably no move harder than V3, but very little fluff in between.  Basically lots of short boulder problems separated by good jug rests.  Definitely one I want to make sure to have my fitness up for this fall! 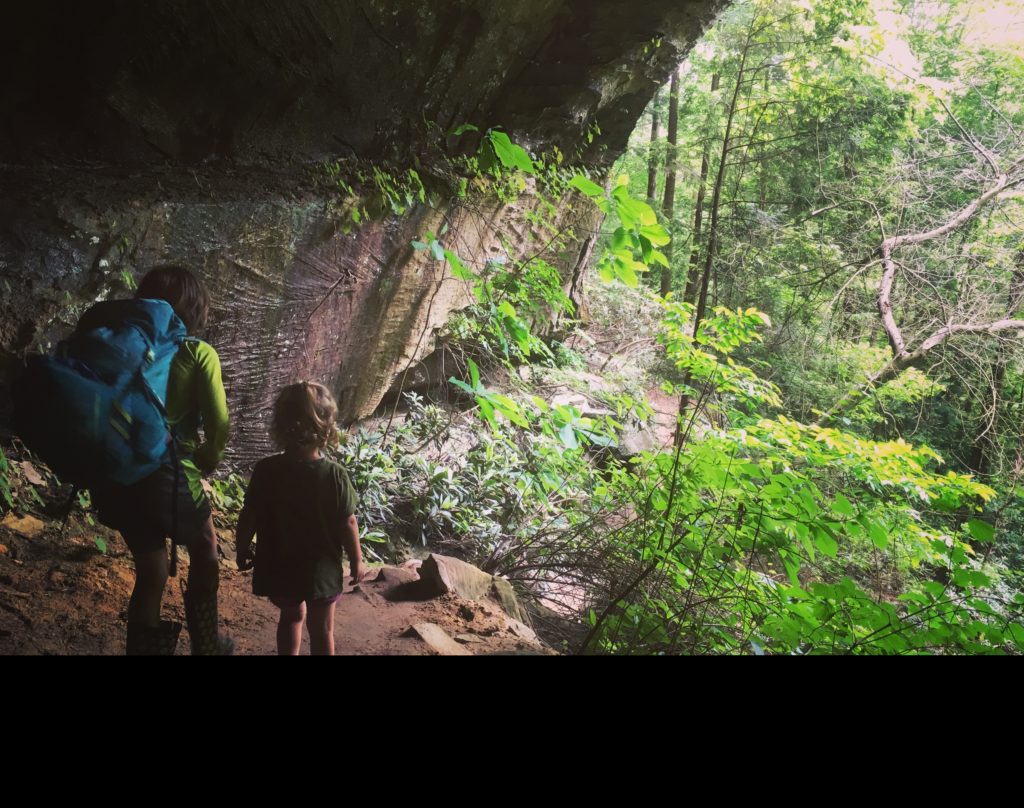 The jungle that is the Southeast this time of year.

And that was that, folks.  A lot different than our original Memorial Day weekend plans thanks to the weather, but hey, if the Red River Gorge is sloppy seconds, life’s pretty good, right?!?