If there’s one thing you can count on when planning trips to the Red River Gorge in the spring, it’s rain.  While rain doesn’t generally equate to the best climbing conditions, there is thankfully one other thing you can count on at the Red – there will be dry rock NO MATTER WHAT.  And not just 5.12 and up dry rock – but dry rock at all grades.  So when we saw rain percentages hovering in the 80-90% ranges, we just tossed the rain gear in the van and hit the road as planned. 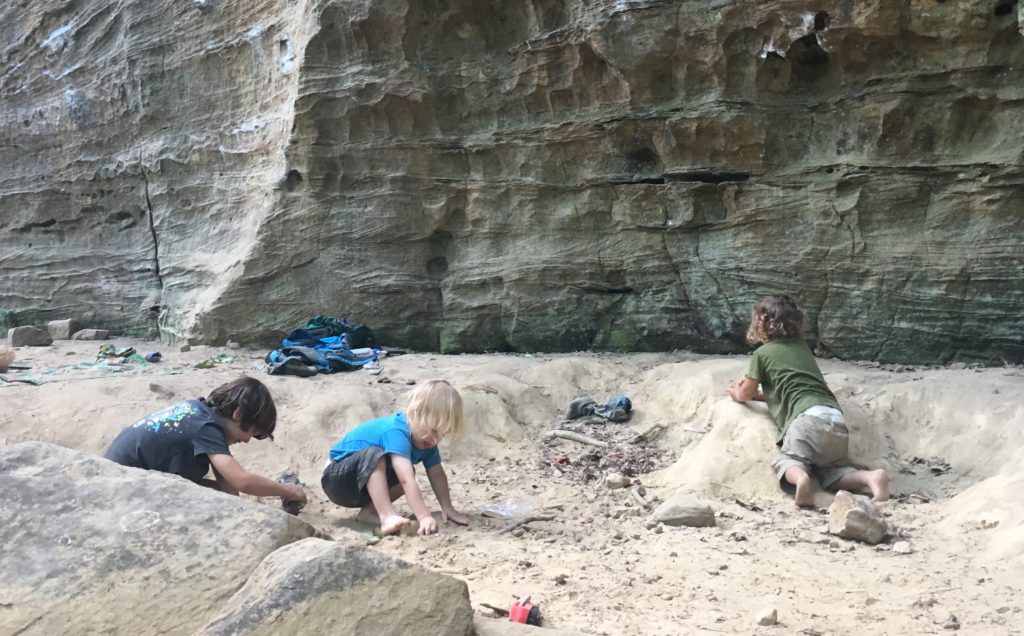 The sand pit at the base of the Buckeye Wall was dry as a bone in the midst of a downpour!

Thankfully, skies were clear when we set up camp at Land of the Arches Campground Thursday night.  However, thanks to a whopper of a storm that rolled in a little after 5 am Friday morning, our crew was up and ready to rock and roll by 6.  Not surprisingly, we were the first to the Motherlode parking lot.  At this point I should probably stop and confess that in 8 years of pilgrimages to the Red, our family had not once been to the Motherlode. Shocking, I know, but we made things right on this trip. 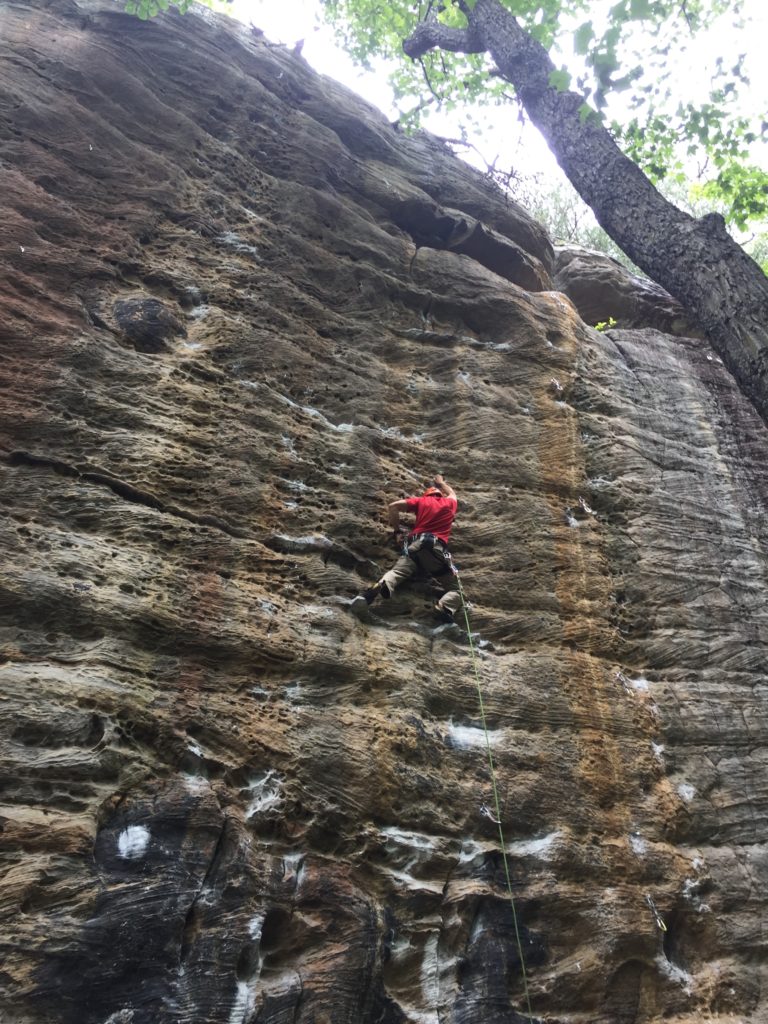 CragDaddy trying hard on Buff the Wood 12b

We started our day out warming up on Ben 11a, not a bad climb, but also not a good warm-up – reachy moves on holds that felt like they were coated in toothpaste.  The mist that hung over the entire wall did not help climbing conditions or our psych level, but we pressed on and all took a run up Breathe Right 11c, before moving on to the left side of the cliff.  We all got thrashed on Buff the Wood 12b before CragDaddy noticed that the narrow, blunt arete we’d been eyeing earlier was looking pretty dry.  You’d think a line as unique as this would have been named something a little more classy than Ball Scratcher 12a, but it is what it is.  The climbing was very un-Mother-lode-ish, following a slabby to vertical rounded corner at the end of the wall.  Very technical, very funky, and very much the style of climbing that we love.  It is a little heady – the bolts follow the corner, but the climbing sometimes steps to one side or the other, meaning that a fall in certain places will take you around the corner.  (For the record, however, CragDaddy took one of those whips when he unexpectedly popped off around the 3rd bolt, and while rather exciting, it was still a very clean fall.)

The movement was fairly sustained, but I didn’t feel pumped because I was on my feet the whole way.  It might be worth noting though, that CragDaddy felt pretty pumped at the top and thought the feet were really awkward, so maybe this one is better for the shorties?  The crux for all of us was at the top, but to be fair one of the key slopers was wet, so on a dry day that move might not be so cruxy.  Anyway, thanks to some great CragDaddy beta I flashed the route, but unfortunately the send train left the station before anyone else could hop on.  We’ll definitely be back though…apparently Ball Scratcher is a good warm-up for the classic Swahili Slang 12c, which looked pretty sweet, but was wet at the top. 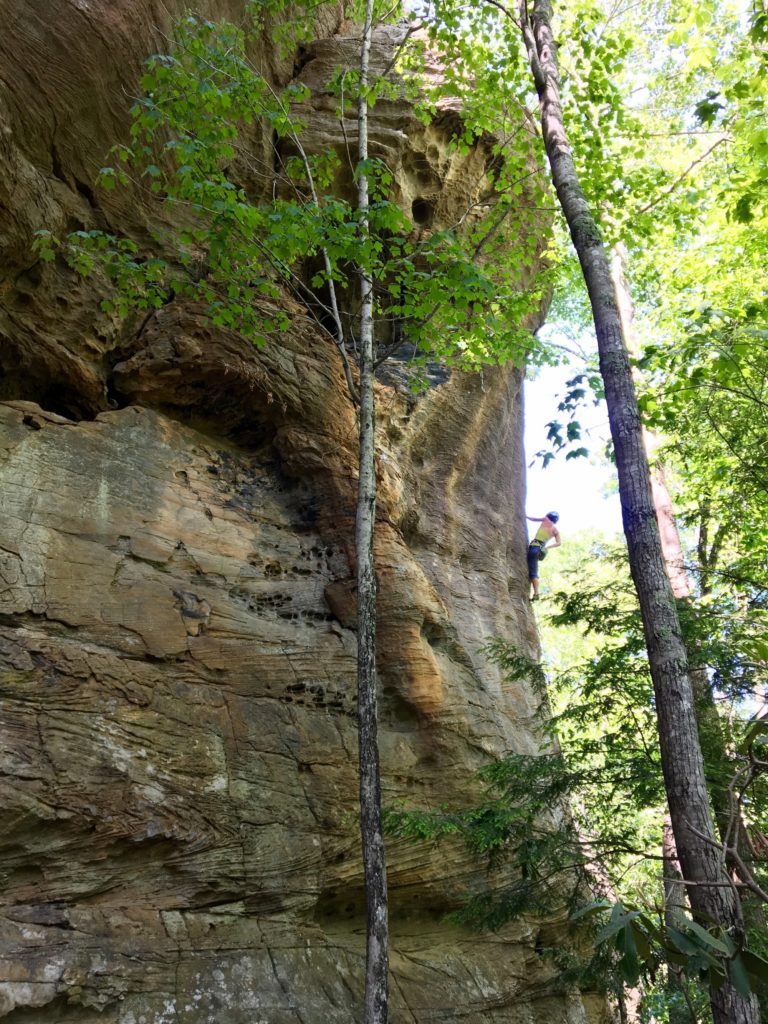 Keepin’ it classy on Ball Scratcher 12a

Friday night our big orange tent was assaulted by yet another wicked band of thunderstorms.  Thankfully, all the kids slept though it this time, and our only casualty was our pop up gazebo that we won at a Harris Teeter giveaway 15 years ago (We had some good, dry times under that little gazebo…may it finally rest in peace.)  Saturday we headed out to Roadside Crag – our first time there since they reopened and adopted the new permit system in 2015.  I’d forgotten what a great place this is for families.  Short hike, flat, sandy cliff base, and just about everything stays dry after days and days of downpours!

After getting flash-pumped on our warm-up the day before, we started a little slower this time – AWOL 10a, before heading over to Up Yonder 11b.  It took me 2 go’s to put down Up Yonder – my first attempt of the day I fell making a move to what turned out to be the wrong hold towards the top.  Second go I made it through, albeit with a little bit of feet flying around at the top.  But the send was meaningful, since it was one of my first climbs ever at the Red, attempted on toprope when I was only 11 weeks preggo with Big C! 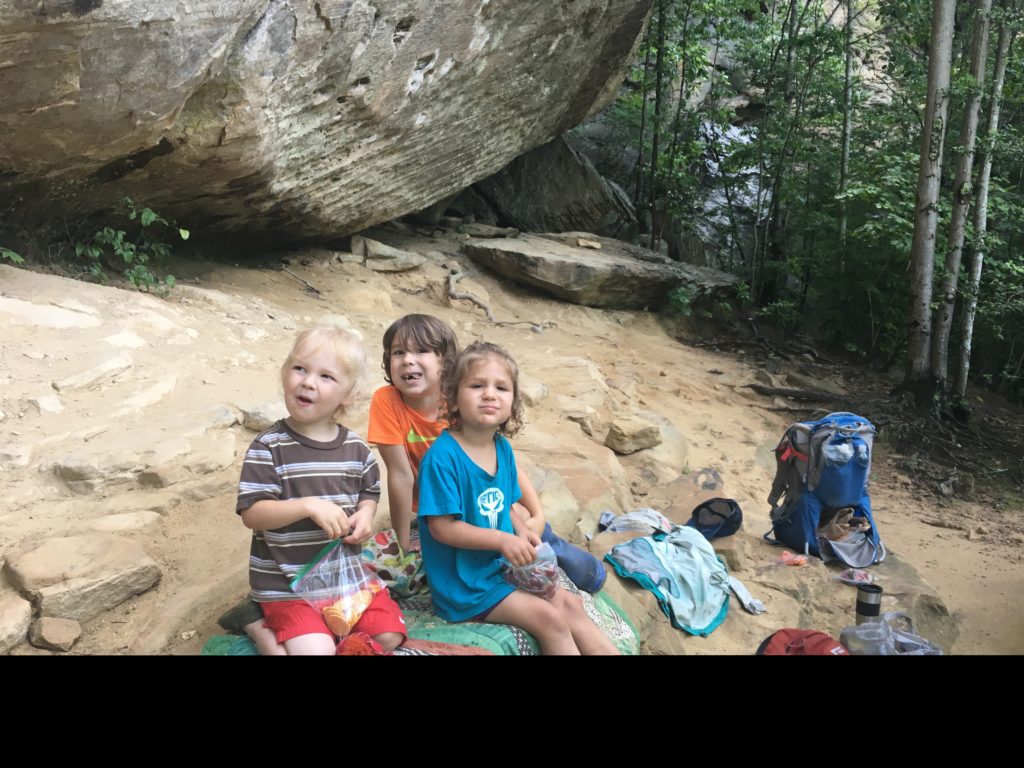 We then decided to check out the hyper classic steepness of Ro Shampo 12a.  Ro Shampo is one of those routes that everyone that’s ever climbed at the Red seems to know about, whether you climb 5.8, 5.12, or 5.14.  It’s a very aesthetic line that rides up giant incut plates.  Although it’s a first 5.12 for many, I personally was pretty intimidated standing underneath it.  It’s relatively short, but while the holds are huge, so is the distance between them.  It’s got a reputation for requiring a lot of dynamic movement for anyone not blessed with the wingspan of an albatross.

Initially, I wasn’t that psyched.  The moves looked big, with the fall potential even bigger, and it was my turn to hang draws.  But the wise CragDaddy was right as usual – we owed it to ourselves to at least try it.  So off I went, on a bolt to bolt exploratory mission.  And I felt pretty good on it!  I hung on every bolt but did all the moves first try save the crux.  The crux took a little bit of work to find something that would work for my body type, but I managed to figure out some pretty solid beta (that was, not surprisingly, COMPLETELY different than what we’d ever seen anyone else do.) 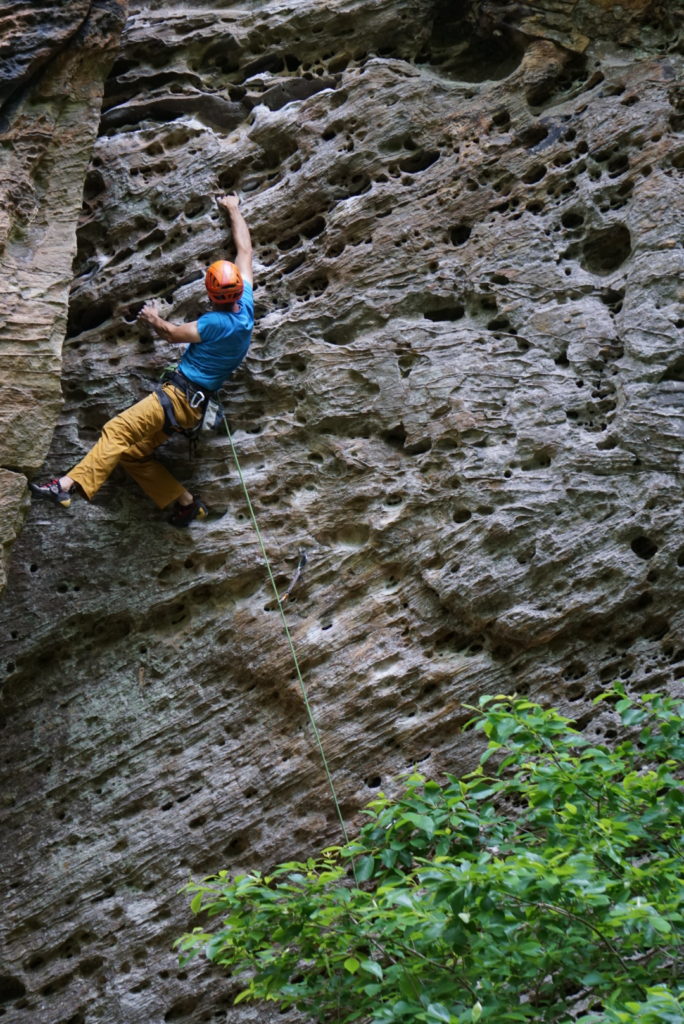 CragDaddy looking strong on Up Yonder 11b

Our typical rule of thumb for attempting harder routes is that unless it is an absolute flail-fest, you need to try it a second time to really get a feel for how close you are to sending.  So although I was still a bit doubtful, I gave it another run, and managed to link enough together for a two-hang.  I fell at the crux, but refined my beta a little more, and also hung once more up high.  By now, I had apparently found my big girl panties and was starting to feel a lot more confident with the moves, and therefore having a lot more fun with it.  My third attempt was actually a decent redpoint burn – I made it through the crux, and fell trying to make the next big deadpoint move…however, after I pulled back up, I found some different beta that seemed like it would be much more of a sure thing when I was coming in hot.  The CragDaddy was also having a lot of success.  His tall man crux beta looked far cooler than mine, and his high point on the day was actually just two moves from the top.  We hiked out feeling thrilled with the progress we made pushing ourselves out of our technical face climbing comfort zones into the steep arena. 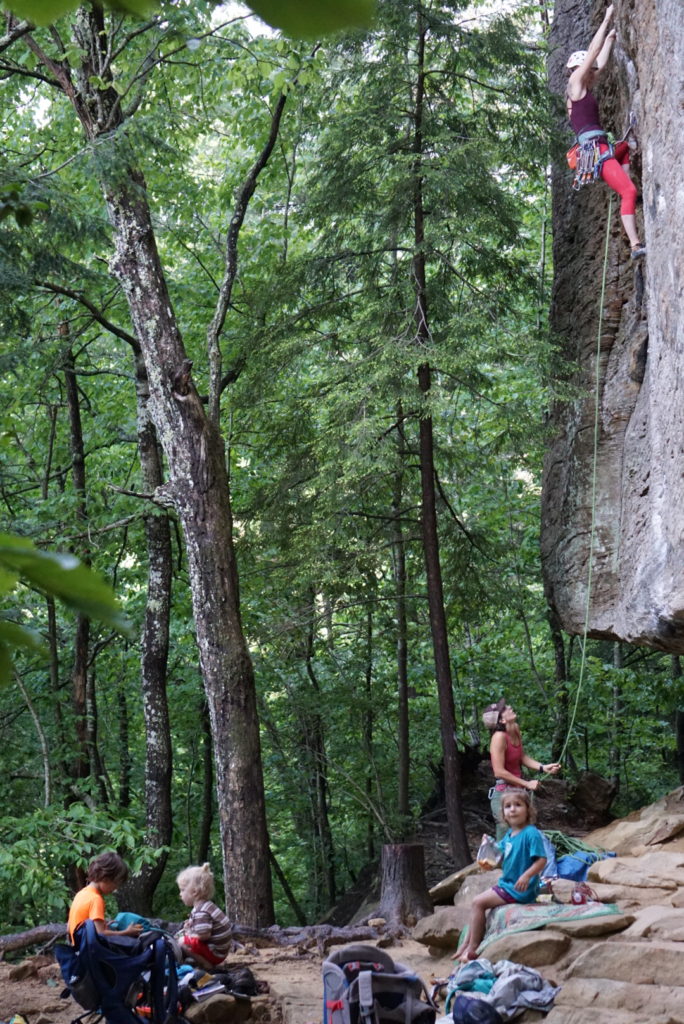 Rebekah on AWOL 10a, while the cragkiddos do their thing below

The more we talked about it that night back at camp, the more and more sure I was that I could send it if I could just get another chance.  With a pretty much washout forecast for the next day, it wasn’t that hard to convince our compadres to head back there again.  So early Sunday morning, I found myself once again staring up at Ro Shampo, this time ready to give it all I had.  Now the CragDaddy and I have figured out a long time ago that when you have a project at the Red, it can often be beneficial to warm-up on it by going bolt to bolt.  Unlike our fave Endless Wall routes at the New, the Red tends to lack a lot of tweaky holds that would make starting out with cold fingers a bad idea (and even if there are one or two, it’s usually pretty easy to just pull through.)  Starting right in on the project allows you to re-familiarize yourself with the beta, going bolt to bolt prevents the dreaded flash-pump, and eliminating a different warm-up route potentially gives you an extra attempt later in the day.  (Not a big deal if it’s just two climbers…but for those of us with kids that often only get in 4-5 pitches TOTAL in a day, making the most of that first burn can make a HUGE difference!) 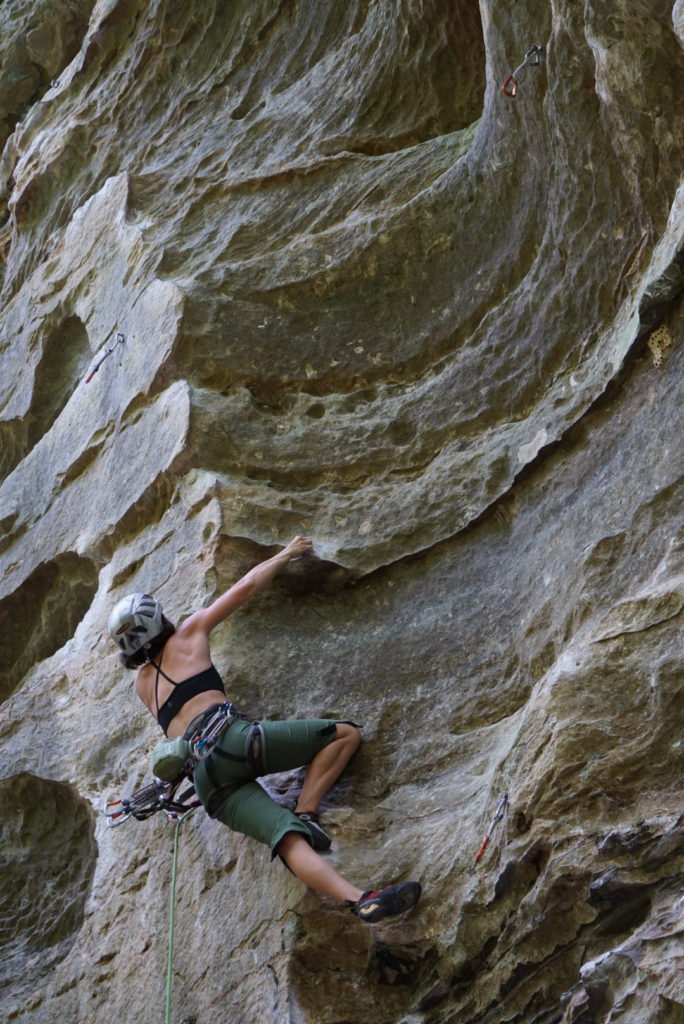 Cruxin on Ro Shampo 12a

So that was our plan.  CragDaddy got things rolling with a smooth one-hang.  This route was gonna go down for him for sure.  I tied in and told my belayer that I was most likely not going to try hard, and was going to hang the minute I started to feel any sort of flash pump.  Off I went.  A couple of minutes later and I was clipping the chains!  I just felt too good to stop!  CragDaddy promptly followed suit on his next burn, along with a couple other people that were running laps on our draws.  Send train days are the best! 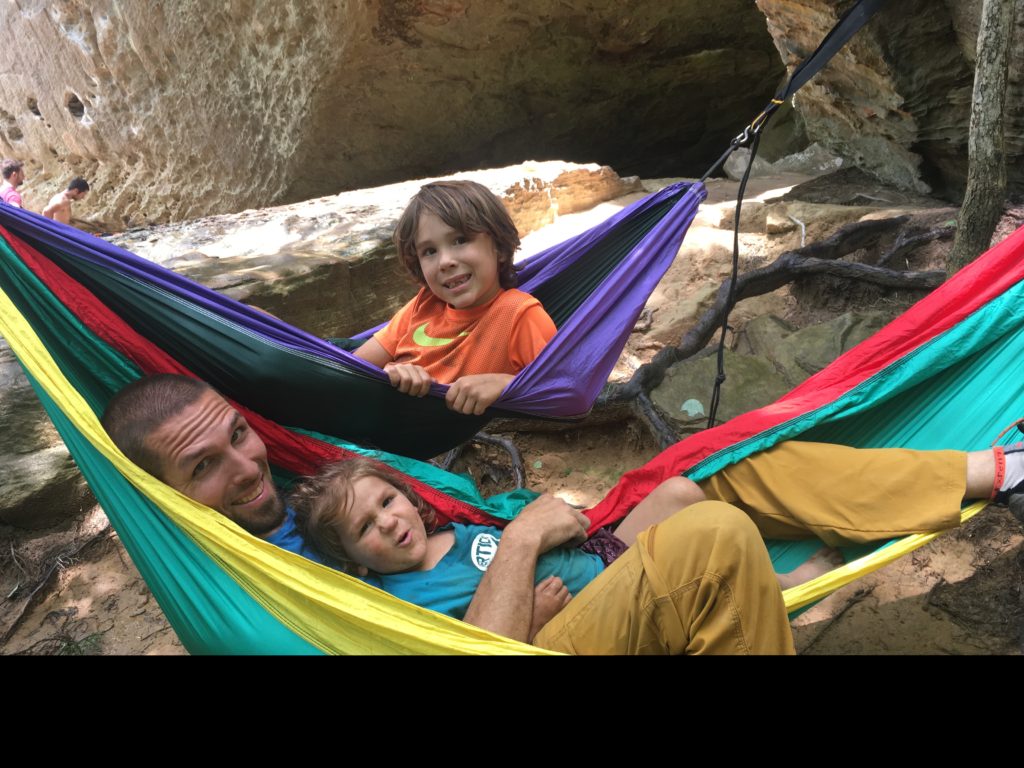 Taking over the crag one hammock at a time.

I ended my day on the two lines I’d never attempted on the 5.10 wall – Dragonslayer 10d and Pulling Pockets 10d.  Both were good routes, but I enjoyed the latter a lot more.  Since CragDaddy hadn’t sent Up Yonder the previous day, he tried that one again and the 3rd time was the charm.  We hiked out around 3 and despite the rain, still made it home by 10.

The upcoming Memorial Day weekend forecast isn’t looking much better, so we’ll see where we end up this weekend – where is everyone else headed?