It only took us until the middle of June this year, but we FINALLY made it back up to one of our favorite places in the entire world this past weekend.  All spring it seemed we had one logistical issue after another – weather, partners, schedules, you name it.  The only other time we’ve gone this long without climbing at the New River Gorge was the year Little Zu was born, when we skipped spring/summer up there entirely and waited til fall.  But now all is right in the world.  It may be too little too late when it comes to enjoying “the season” up there, but at least we got one fix in before the summer heat and humidity takes over. 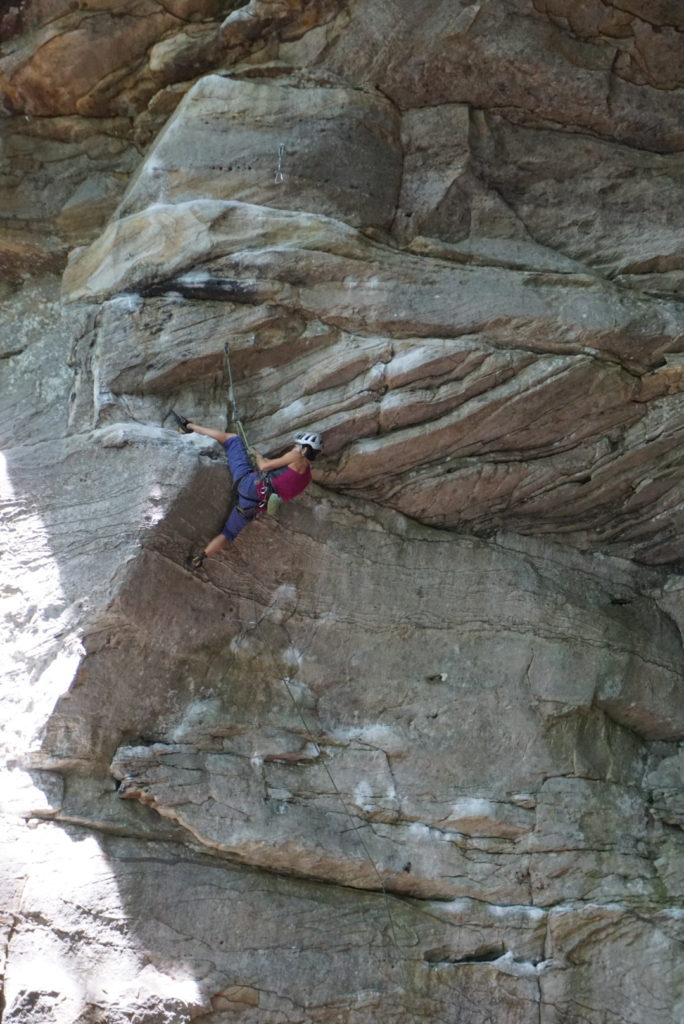 Narcissus 12a Photo by Michael Johnston

Considering the hot, sunny forecast, we opted to spend Day 1 at Summersville Lake.  Nothing like a gorgeous water backdrop that you can melt into at the end of the day!  We started our day getting some redemption on an area classic, Satisfaction Guaranteed 11a.  CragDaddy and I had both bailed off this route way back in 2010.  He was 50+ pounds heavier at the time, and I was just 5 months postpartum…but we had no issues with it on Saturday, and now we’re satisfied ;). 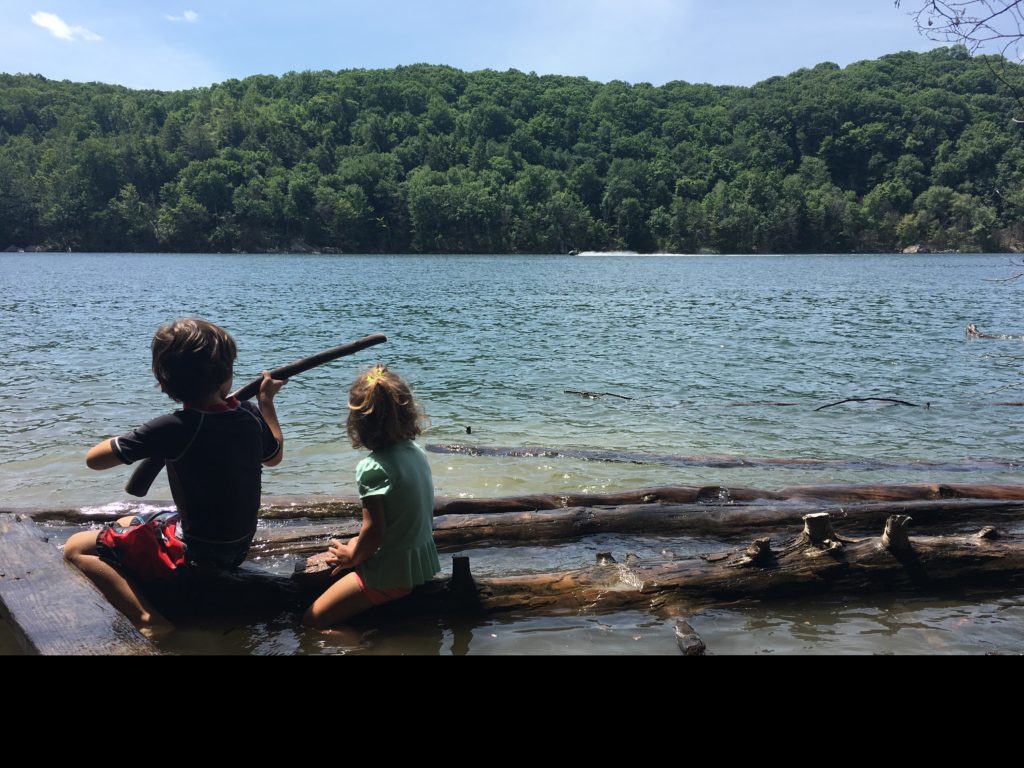 Next was Narcissus 12a.  I’d also been on this one before, back in 2012, though it was a bolt to bolt run that was nowhere close to a legitimate sending attempt.  This route is touted as a must-do for the grade, and after my recent successes on the steeps this spring, I was optmistic that it could go down in a day.  My first run, however, was not as smooth as planned, and I struggled more than I’d wanted to on a couple of sections.  My second run felt great – I was clean all the way up to the last deadpoint move.

For me the line boils down to 3 hard sections – a long move off crimps, a choice between 2 boulder problems (one going left, one going right…I go right), and a big deadpoint off a small sidepull.  The finish is steep and pumpy, with giant, flat holds that SHOULD be good enough if you can just keep yourself together…but it’s by no means a sure thing, and I know at least one person that has whipped at the chains. 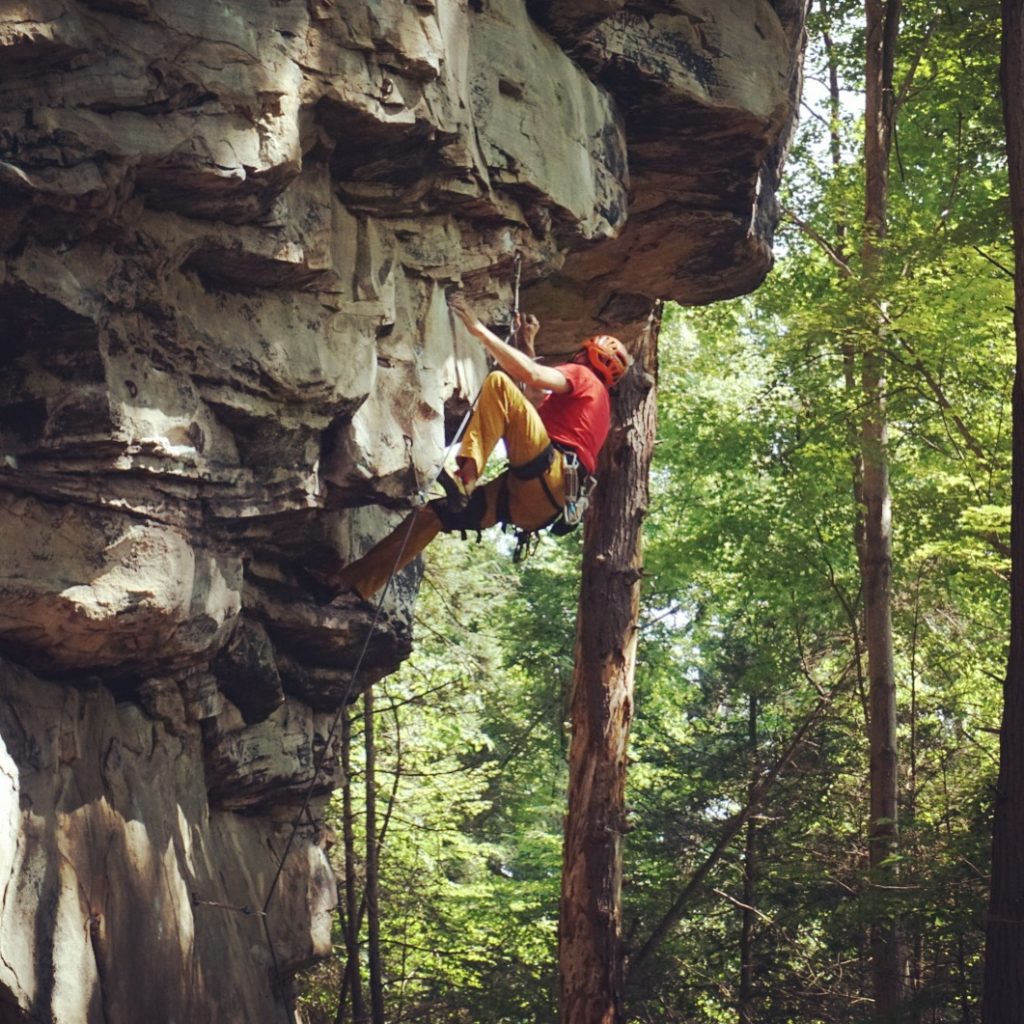 My third go was shaky, potentialy because I tried out some new clipping beta for the 3rd bolt…something just didn’t feel right, and I fell moving into the boulder problem.  In the back of my mind I was thinking I perhaps had missed my “sending window,” but there was still plenty of time left in the day, so I hopped on it again.  I went back to my original clipping beta, and the lower moves flowed a lot better.  When I got to the deadpoint move, I made sure to get my right foot as high as it could go, and tossed for all I was worth…and it was enough!  The finish was uneventful, and I lowered off with a smile on my face, and a right forearm that continued to feel pumped for the next 12 hours.

The rest of my day was spent in the water with the kiddos, while the rest of our crew finished up the day on the Long Wall.  Big shout out to Little Zu for hiking almost the entire way out of the crag…barefoot.  There were MANY hiking bears involved, but she powered through until the last downhill bit to the parking lot, where I carried her in my arms like a baby, and she went from hiking to sleeping in a matter of 300 feet. 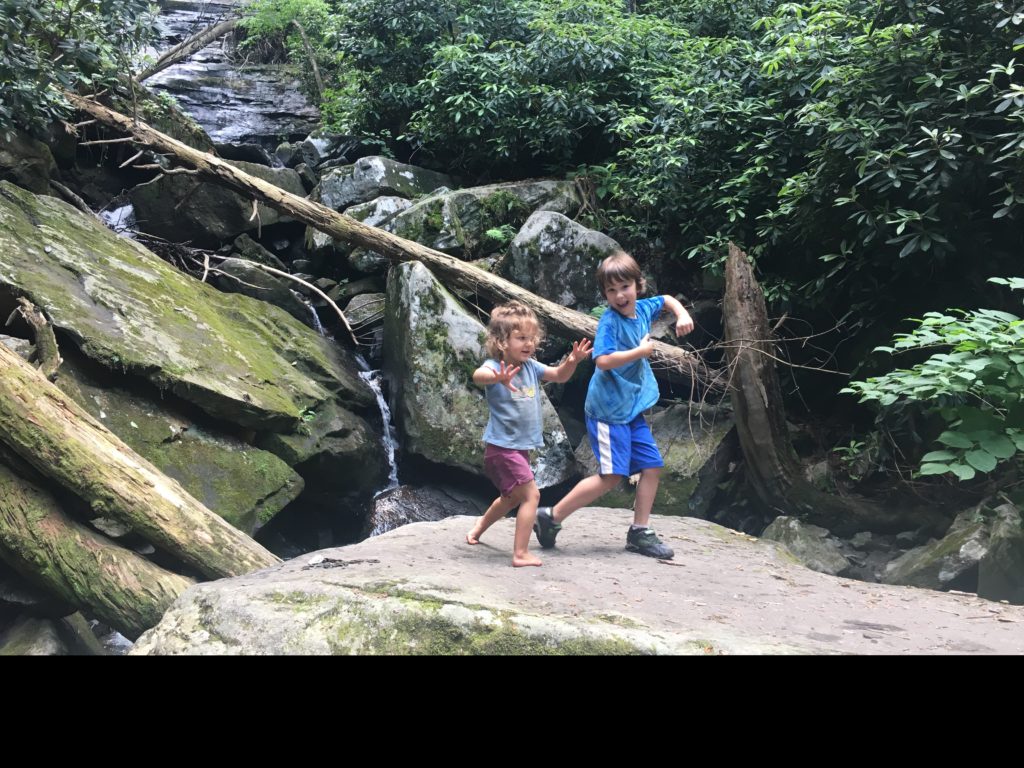 I’m not sure what’s going on here but it looks fun!

Day 2 dawned equally sunny and a smidge warmer even, so off to Kaymoor we went to find shade.  I hopped on Boing 10d, which is one of my favorites, then moved over to Control 12a.  CragDaddy had already sent Control on a previous trip last spring, so he decided to put in some work on Kaos 12c, and after a few burns, he was able to do all the moves and link the lower section.  I’d taken a couple of burns on Control once before (the same day CragDaddy had sent), so I was hopeful I’d be able to put it all together.  I took a run up to hang draws, and felt even better about my chances.  Then I proceeded to fall at the SAME FREAKIN’ MOVE on the next FOUR redpoint attempts.  Each story was the same – get through the opening bit, crimp hard on the traverse, get feet set for the crux move, lunge…..and fall.  Then hang for a few seconds, pull back on, and fire the move like it was no big deal.  For whatever reason, I just could NOT do that move on point!

In hindsight, I think the problem can be blamed on “not enough NRG time” lately.  If you’ve been there, you know…the New requires so much more focus than the same grade at pretty much any other sport crag I’ve ever been to.  Each time I fell on Control, my crew and I noticed some sort of subtle nuance of body position that I was doing differently when I was coming in hot, versus trying the move off the hang.  Obviously, when you’re at your limit, every bit of technique helps no matter what crag you’re climbing at…but NRG is the only place where I consistently have to stay focused on so MANY minute details for the ENTIRE climb, as opposed to just one or two moves.  Nothing is a gimme at the New!  That said, I THINK I have the beta dialed down to the letter for next time on Control….that is, if I can get myself psyched to get on it again! 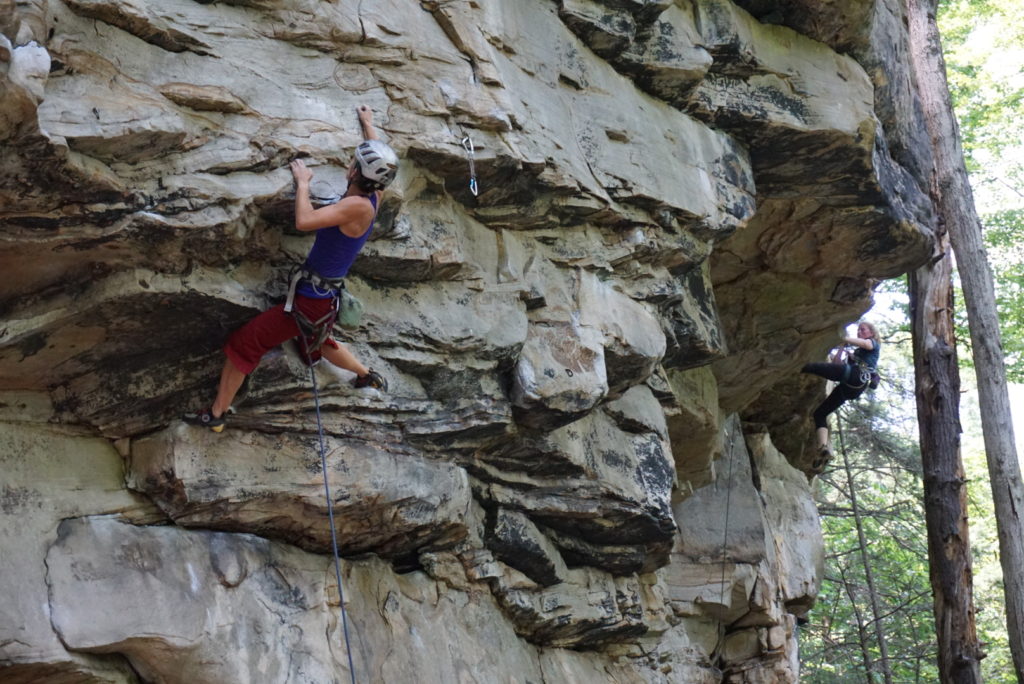 Control 12a, Photo by Michael Johnston

The thing that I’ve learned about the New River Gorge is that it can be frustratingly unpredictable when it comes to doling out sends.  The day before, my efforts were rewarded on Narcissus.  The next day, not so much, despite putting in what felt like the same, if not MORE effort.  The great thing is that sending or not sending really has zero importance in the grand scheme of life.  😉

And with that said, I’m so thankful for his place, and I’m so glad we got a chance to go back before the heat got too ridiculous.  Hopefully the logistics will work out a little better for us in the fall, and we’ll be able to rack up some back to back trips during prime conditions.  But, until then, you can find us dividing our time between the gym and the pool for the next couple of weeks!