For months I’d been looking forward to my 37th birthday…not because I’m anxious to be another year older, but because this year my birthday fell on one of the craziest weekends of the year – Solar Eclipse 2017.  My one request was that I wanted the whole family to drive to the path of totality to witness this celestial display together.  Considering that our home town of Charlotte, NC was only about 50 miles outside of the edge of the path, it wasn’t a hard sell. 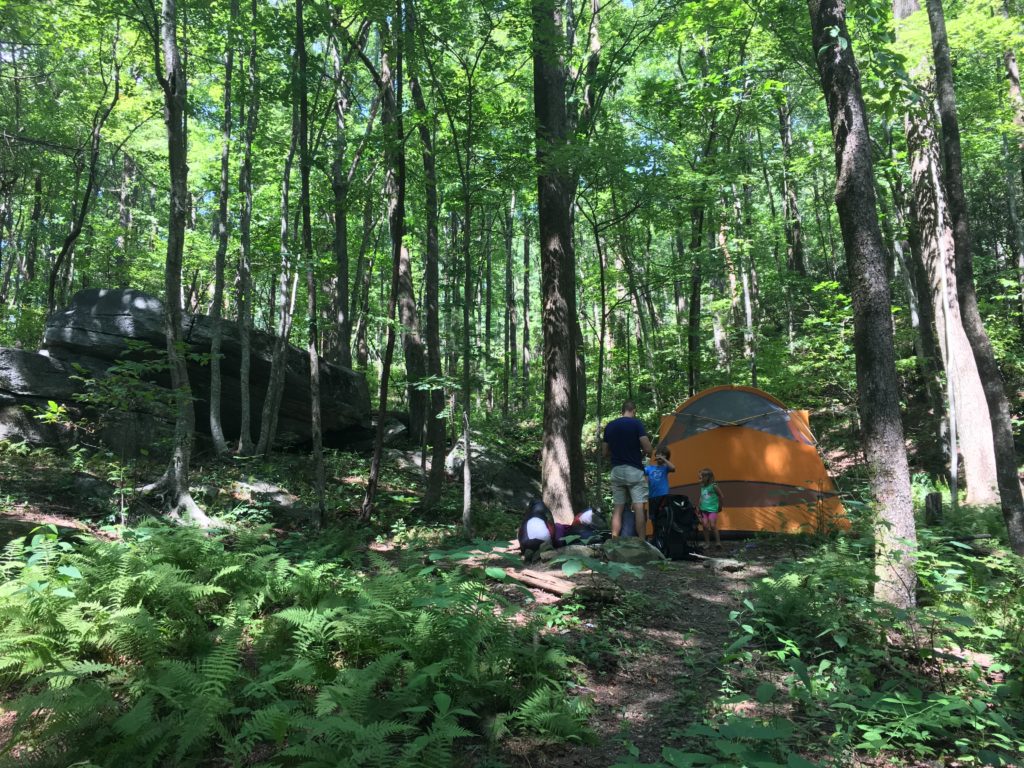 Not bad for a last minute find.

Rather than fight through the traffic on either side of a day trip, we decided we’d prefer to go up the night before, but we had of course procrastinated too long to get reasonably priced hotel reservations, and all the state park camping had long since been booked up.  That’s where the goodness of the climbing community came in – a friend of ours from the Joccassee Gorges area gave us a heads up on several local first come, first serve primitive camping options that were off the beaten path. 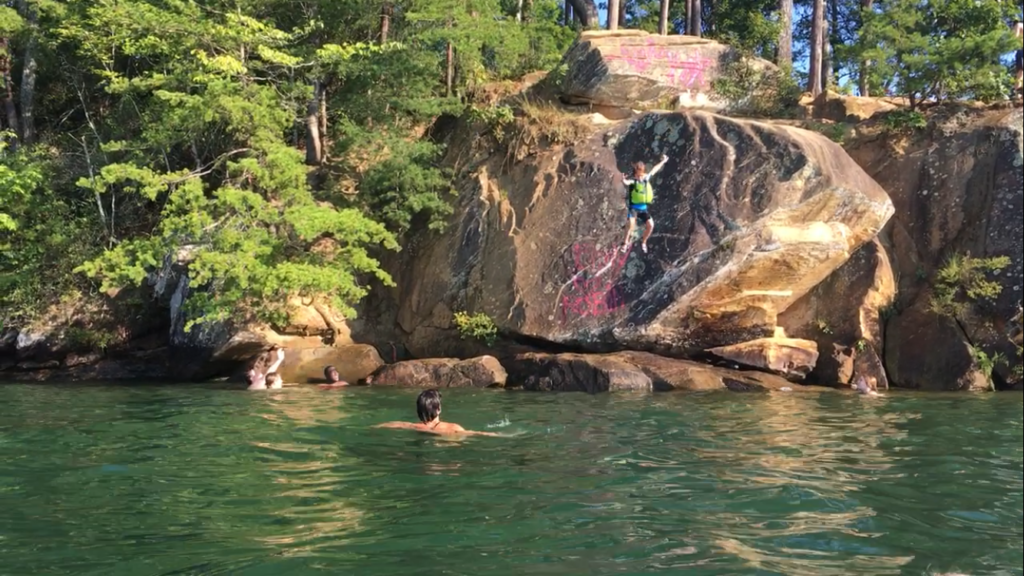 So after church on Sunday, we drove off to SC for an adventure, not knowing exactly where we were gonna spend the night, but optimistic that one of our 3 options would pan out.  In addition to our giant orange tent, we also packed our 2 person backpacking tent and a couple of hammocks as Plan B in case we couldn’t find enough space in the woods to erect Big Orange.  We were amazed that our first option atop Sassafras Mountain was not only available, but that we were the ONLY ones there!  Well, sort of.  There were in fact several tents strewn across the summit ridge, but our solid climber beta got us away from the crowds, and out of the baking sun by hiking down into the woods from a pullout half a mile from the summit.  The hike in was less than 2 tenths of a mile, and the camping area was perfect – plenty big enough for big orange (although C was kinda psyched on the hammock idea, so we ended up stringing that up for him anyway!). 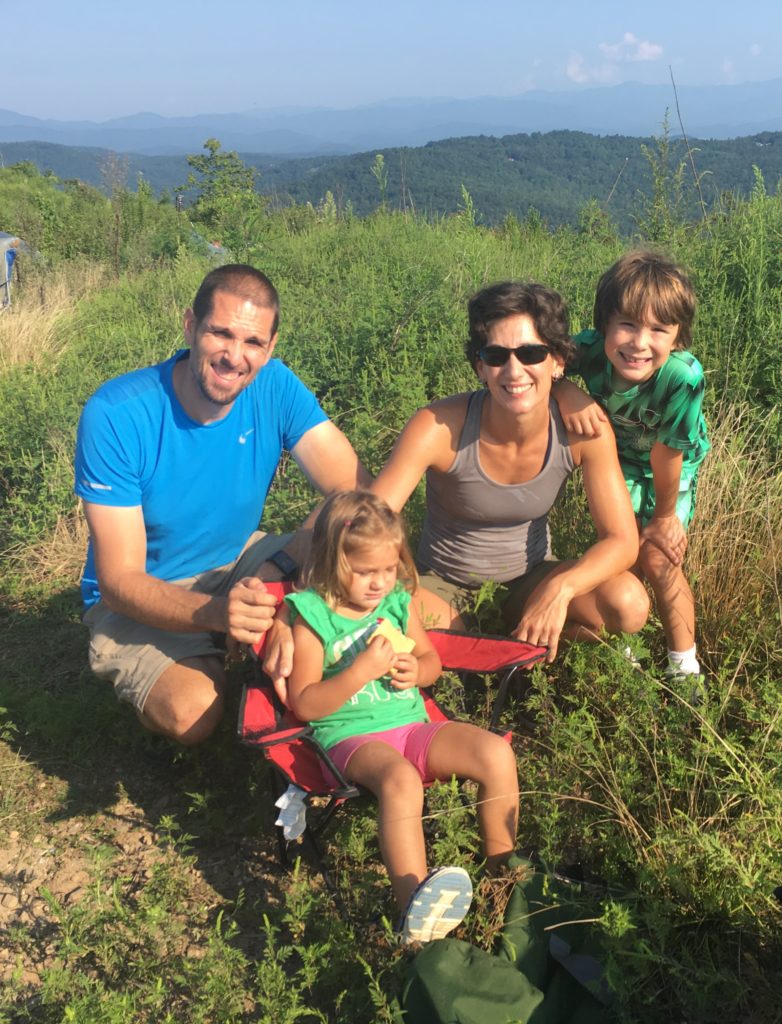 Everyone felt a lot better after we had secured our sleeping arrangements, so we went off to find something fun to do for the evening.  And what better way to celebrate a birthday AND an eclipse than an evening paddle on beautiful Lake Joccassee?  Maybe if we added in some cliff jumping in clear water that was perfectly refreshing without being even a little bit cold?!?  We enjoyed ourselves to the fullest, and I told CragDaddy that I haven’t had a birthday that fun since the one I spent in Ten Sleep.  After a picnic dinner overlooking the lake, we headed back up to our own little corner of the mountain.

Considering that Sassafrass Mountain is the highest point in SC and right in the center of the path of totality, we knew we wouldn’t be the only ones up there viewing the eclipse.  We started hearing the first cars drive up to the summit around 730, our signal to quickly pack up camp in order to grab a parking space at the top, as there was only space for about 30 cars in the lot. We were thankfully able to park pretty close even though we weren’t in the lot, but by the end of the day, cars were lined on both sides of the curvy mountain road well past our camping pullout at the half-mile marker! 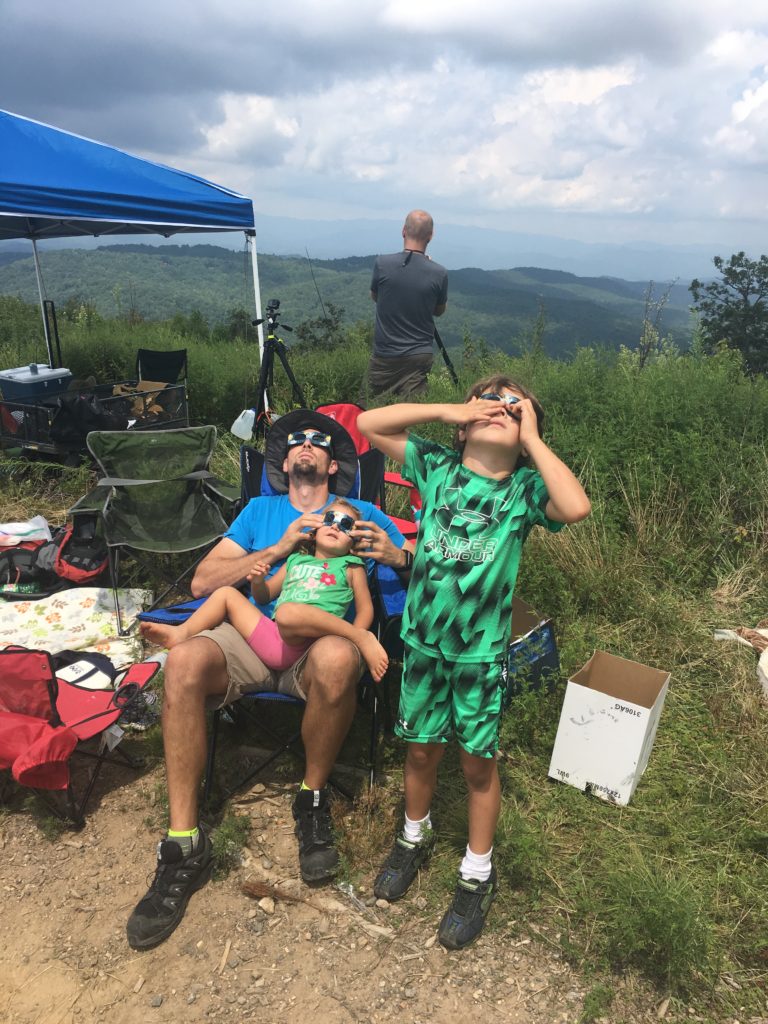 We staked out a good spot for our chairs along the top of the ridge, but still had several hours before the action started, so we descended back down into the shade for some hiking, overlooking…and parkour in the woods.  Vaulting across a giant log that had fallen across the trail kept both kiddos entertained for the better part of an hour.  Once the partial phase of the eclipse began, I was very thankful that our chosen viewing area had so many options to run, explore, and get away from the crowds and the sun whenever we needed a break.  CragDaddy stayed glue to his seat for most of the duration, while I did laps with an antsy Little Zu (and eventually Big C, once he figured out that he could leave his seat and still watch the progress of the eclipse.)

After having seen the forecast (and being on top of a mountain), we weren’t surprised when the afternoon clouds rolled in.  They never shielded us from viewing for more than a few minutes at a time, and the cloud cover made waiting around feel much more pleasant.  We got a very clear window for a long time leading up to totality, but unfortunately a cloud moved over at exactly the wrong time, which prevented us from seeing the diamond ring or the corona.  But while we didn’t SEE all that we had hoped to see during totality, we certainly experienced it with all of our other senses…it was like someone just switched the lights off!  I was not at all prepared for it to go that dark, that fast!  And our reward for trekking up to the highest point in SC?  An amazing 360 degree sunset panorama as far as the eyes could see, with nothing but pitch black shadows below us. 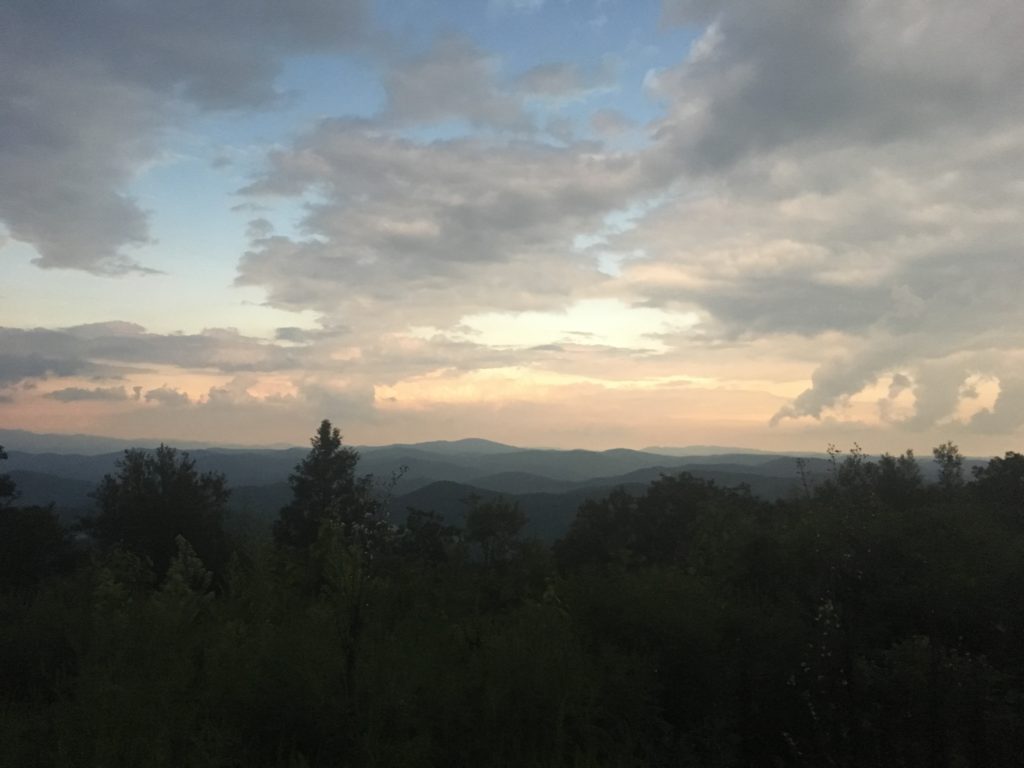 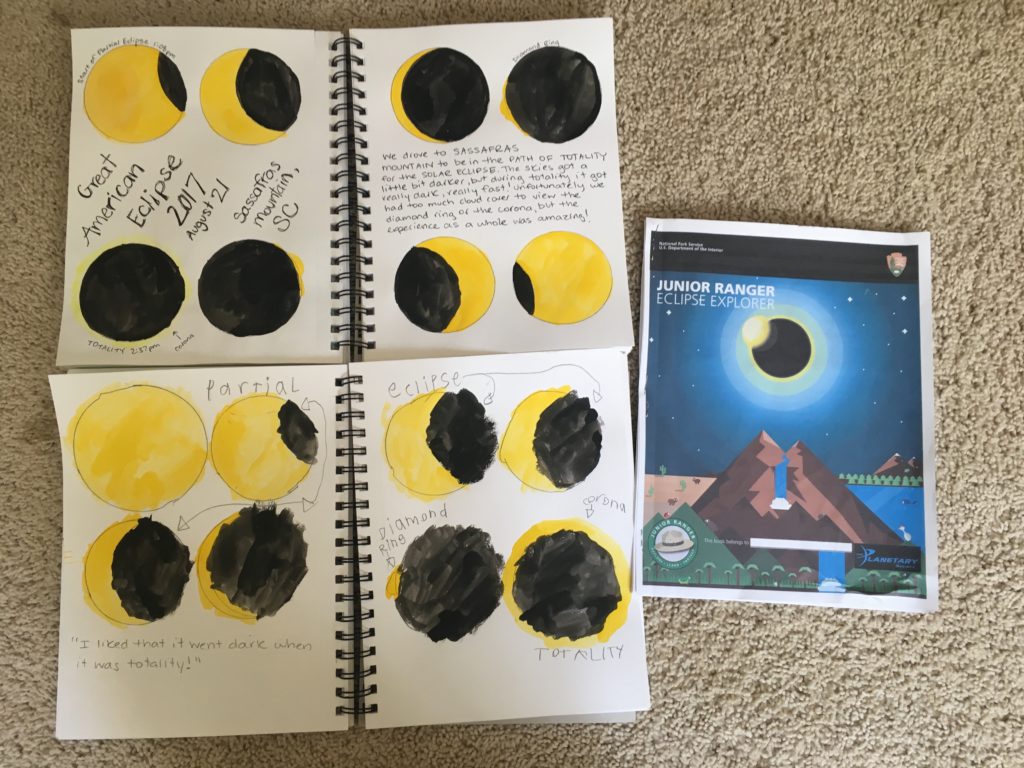 The air got still and the crowds went silent, save a few murmurings and oohs and ahh’s…and then Little Z tipped backwards out of her chair from straining to look behind her.  And with that, the afternoon “dawned” quickly, like we were inside a video that was fast forwarding at twice normal speed.

Overall, what an amazing phenomenon to witness, especially as a family!  Big C has not stopped talking about the event since, and has told everyone we run into all that he saw and experienced.  Who needs textbooks for science when the world around us is this awesome and we can explore it in such amazing ways?!?  #notus #homeschoolperks How did your family celebrate the eclipse?