This weekend was our second on 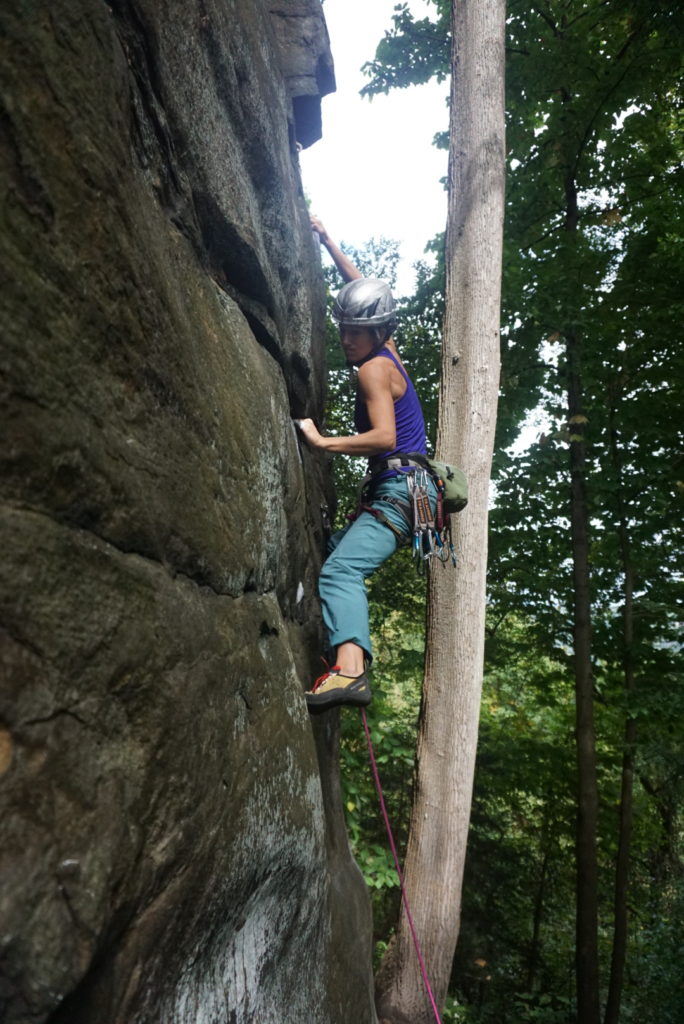 e in a row spent at the New River Gorge, and it represented a game-changing milestone for our family – WE WENT BY OURSELVES.  Just us – mom, dad, and two kids.  To those not familiar with the logistical nightmare that comes with climbing with kids and might not see this as a big deal, let me break it down for you.  It has been 7 and a half YEARS since we have been able to climb without having to nail down any logistics with other people…

Of those 7+ years, the first 3/3.5 were spent needing help with Kid #1.  By the time we would have felt confident to go out on our own as a family of 3, I was pregnant with Kid #2, and didn’t feel comfortable catching lead falls anymore, so we needed an extra person to belay for CragDaddy.  Then Kid #2 enters the scene, and we’re back at square one, this time with an additional 4 year old in tow.  A handful of times we’ve been able to snag a grandparent or two to watch our kids so that CragDaddy and I can have a climbing date.  Even less than that are the days that one of us goes, and the other stays home with the kids.  But we’ve always had a sort of “all for one, and one for all” mentality, so 99% of the time, that means we’ve had to rely (sometimes heavily) on other people.

Thankfully, we are part of an amazing climbing community that miraculously doesn’t seem to mind if our family circus tags along.  I can probably count on both hands the number of times these past 7+ years we have found ourselves stuck at home on a gorgeous weekend due to lack of climbing partners.  But the logistics of securing extra partners can be pretty stressful, especially if one of our “go-to’s” is unavailable.  Many Thursday nights have been spent frantically combing over our contact lists, trying to connect last minute with someone else because the partner we thought we had fell through for one reason or another. 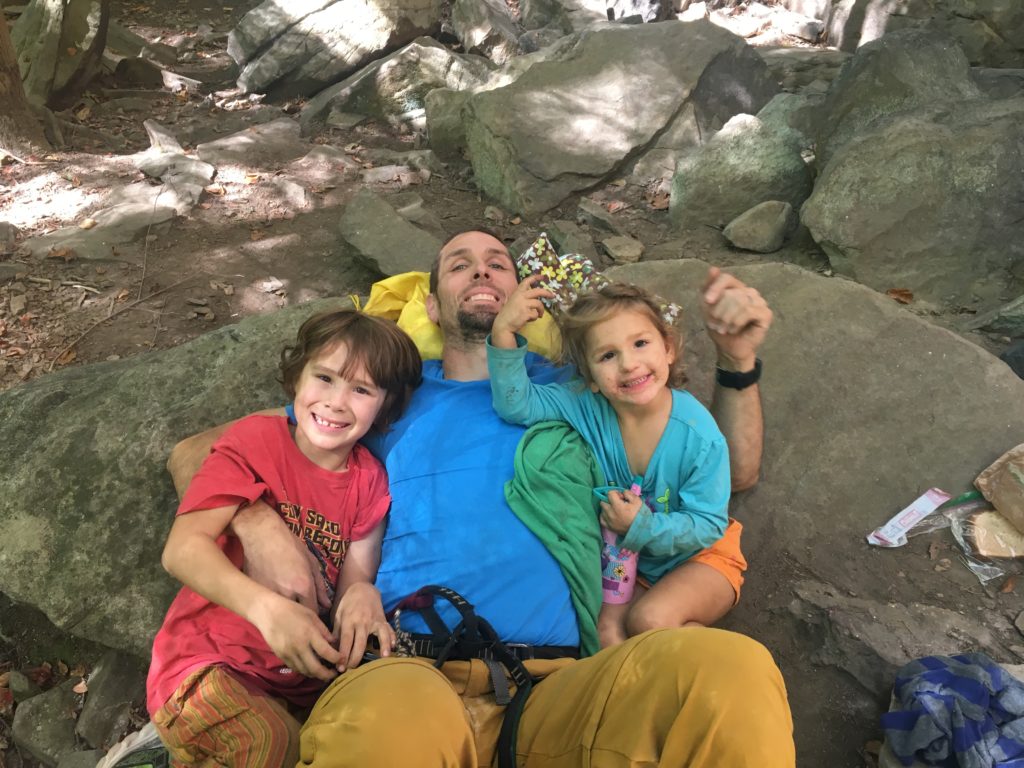 These guys are the best.

We’d been toying with the idea of flying solo for the past month now.  We’d tested the waters of not having an “official” kid watcher a few times recently when we’ve found ourselves at the crag with an even number of adults.  The kids did great, so we decided to go for it, with no agenda for the weekend but to experiment and have fun (well…and if I’m being honest, I really wanted revenge on Preparation H from the previous weekend.)  And you know what – the logistics went better than we ever could have imagined they would have!  We actually got just as much, if not MORE, climbing in than on a typical day, AND we got to spend more quality time as a family throughout the day.  It was actually only a little short of miraculous, to be honest! 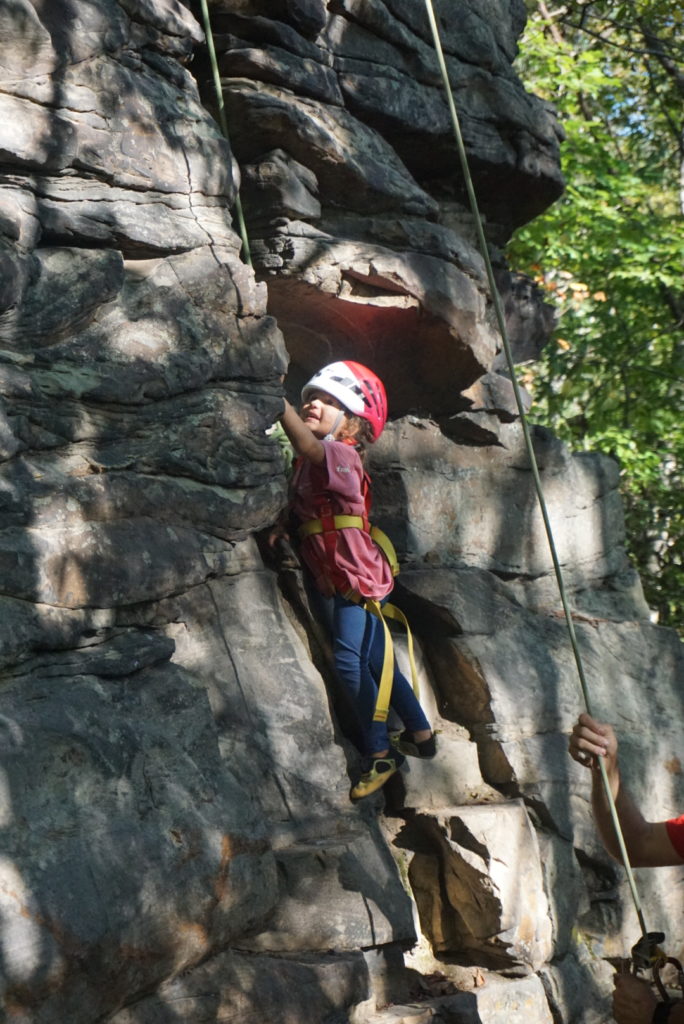 To be fair, we set them up for success the best we could.  We chose areas that were 1) Not likely to be crowded, 2) Kid-friendly at the base of the cliff (flat, open, with no dropoffs or water hazards), and 3) Areas the kids have been to before and enjoyed being at.  We also brought in a few more toys/activities, which was easy to do since this was also the first weekend I hiked in with a normal backpack, rather than a kid carrier, so we had more room.  (ANOTHER FIRST!)

Once we got down there we set up a nice little kid spot, with toys/food/water freely available, and waited til they were settled in on a morning snack.  I warmed up on Rico Suave 10a, everything was fine.  CragDaddy did too, still great.  We spent some time with the kids.  Then I hopped on Preparation H 12a.  I sent hanging draws (!) and the kids were awesome –  totally engrossed in their world of trolls, legos, and coloring.  (And eating.  Always lots of eating.)  CragDaddy took a run up, no send, then pulled the rope.  We all hung out for a bit, ate lunch together, then CragDaddy took another turn and sent.  Boom.  It was lunchtime on Day 1 and my only climbing goal for the weekend was already done! 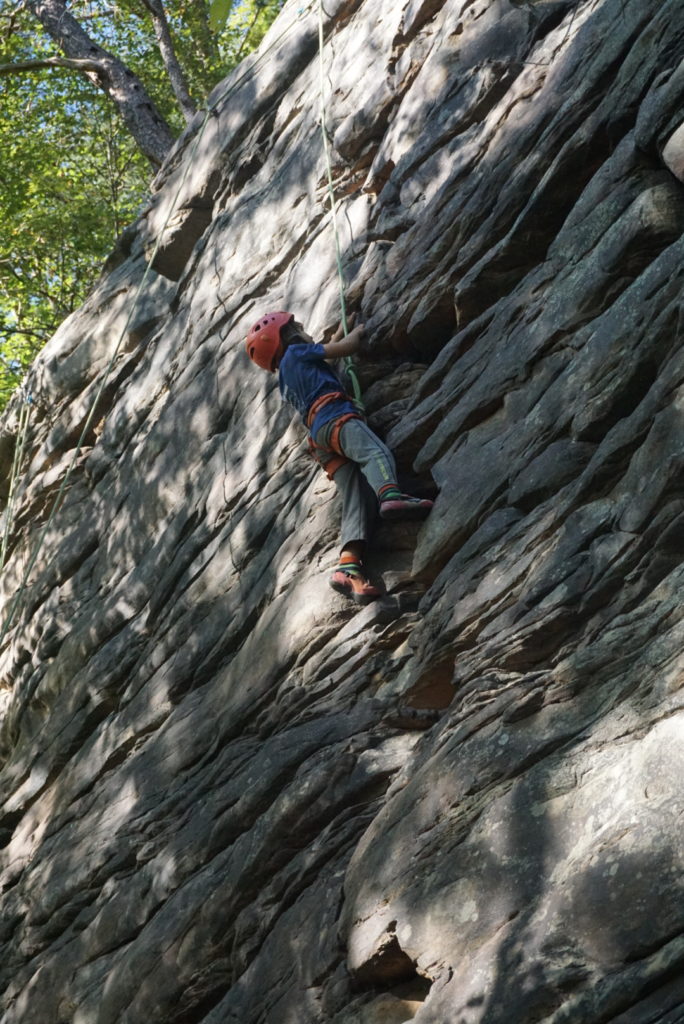 At this point we didn’t really know what to do with ourselves.  We wandered over to the First Buttress, where CragDaddy and I both got smashed by The World’s Hardest 5.12 (12a…but a big fat sandbag!).  We bailed on it, then hopped on Oh It’s You Bob 11b, which is now on my list of best 11’s at the New!  I fought hard to nab the onsight, and CragDaddy made the flash look easy peasy.  The kids played together like champs, with only one minor instance of sibling bickering, and one poopy pants incident from the little one.

We hiked out early enough to hop on over to the Small Wall before dinner, where there are three toprope routes on a 30 foot wall, all in the 5.6 and under range.  Big C styled and profiled his way up all three, working out some really good beta during a couple of reachy sections at the top.  Little Z was determined to have her turns as well, but was each time satisfied 10 feet off the deck.

Our second day was spent at Lower Meadow, and the kids did just as well as they’d done the day before.  I, on the other hand, did not.  After FIVE times falling at the long move crux of Gato 12a, I finally threw in the towel and gave up.  Ordinarily, 5 tries wouldn’t seem unreasonable for a climb at that grade…especially a climb of that grade at the New.  But constant one hangs on a route that I’d had the exact same performance on several years prior really got under my skin…and I’ll be honest, it didn’t help that CragDaddy sent 3rd go of the day.  Oh well.  First world problems, right?  Time to refer back to Toddler Climbing Mantra #1: Climbing should be fun.  If it’s not, pick another route.  (Go here for the rest of the Toddler Climbing Mantras.) 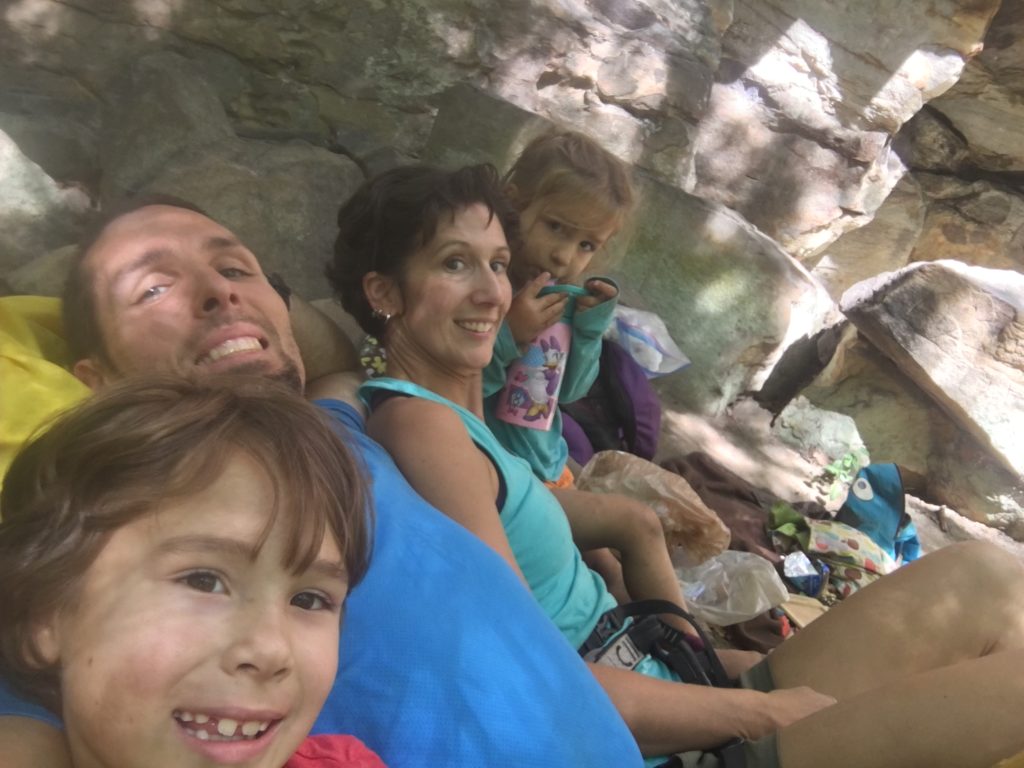 Drawback of climbing solo – our only pics are bad crag selfies 😉

The main takeaway from this story however should be the word FREEDOM!  We finally feel like we have some!  Not that we all of a sudden are turning antisocial or anything, but the thought of planning a weekend without worrying about anyone else’s schedule/logistics save our own feels fantastic.  This weekend the weather finally looks like it’s taking a turn for the cooler…we’ll be out there, will you?!?