Ordinarily when I see rain in the forecast for a climbing weekend I’m pretty bummed.  But when it’s Labor Day weekend and we’re going to the Red, I’m actually psyched.  That’s because I know rain actually means that all the fair weather holiday climbers will bail on their plans, leaving the dry rock for those of us that don’t mind a little bit of mud.  And ironically, despite the deluge we drove through Friday night, the only rain we saw was a bit of drizzle Saturday afternoon! 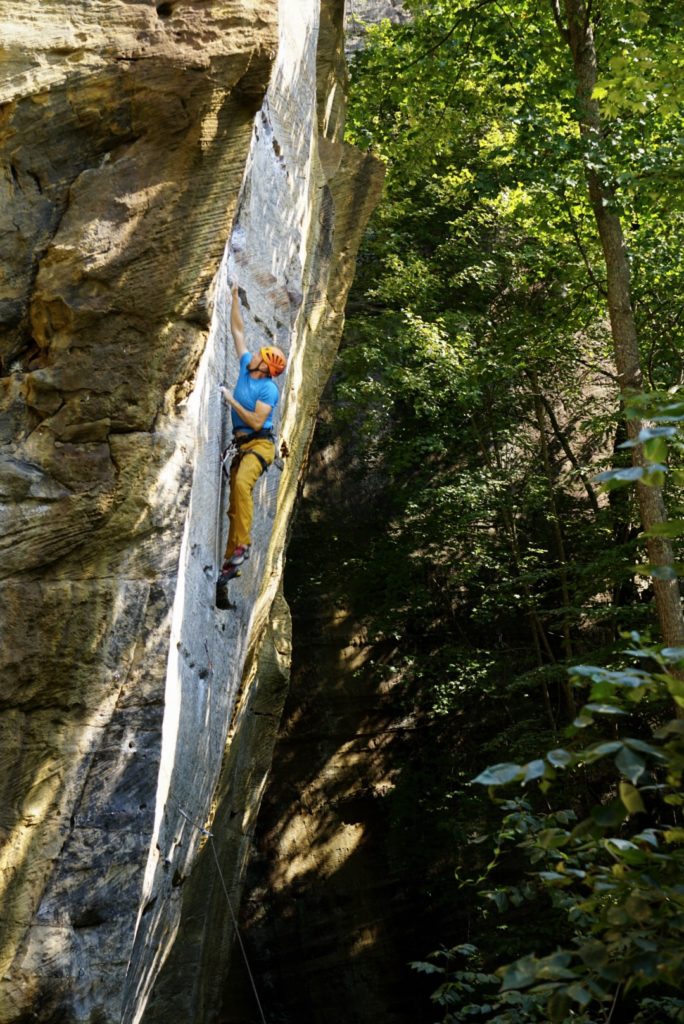 CragDaddy stretching tall on Dogleg 12a

Day 1 was spent at Muir Valley’s Solarium, one of our fave spots to climb.  I’m slowly but surely working my way along the wall, and I can honestly say everything I’ve touched there is awesome!  After a quick warm-up on Air-Ride Eqipped 11a, I began my quest to exact revenge on Magnum Opus 12a, a route that I came up juuuuust short on last spring.  The “business” starts right off the deck and does not let up for 4 bolts – sequential, powerful movement culminating with a toss to a glory ledge that, if successful, earns you a sit-down rest.  If unsuccessful, you’re taking a scary whipper.  Scary because more than likely you were too pumped to clip the 4th bolt from the tweaky mid-crux pockets, and opted to wait for the glory ledge to reach down and clip at your feet.  (FYI with a heads up belay the fall is totally clean…ask me how I know.)  After the sit-down rest you are rewarded with 60 feet of significantly easier, albeit still a little pumpy, climbing.

My first attempt of the day was pretty dismal.  The beta that I’d written down and had so dialed last spring just didn’t seem to be working well at all.  I had all I could do to go bolt to bolt, let along link anything together.  The cruiser upper section even had me pumped.  Since the draws were up I felt like I owed myself one more go, but after that I was planning on taking it down. 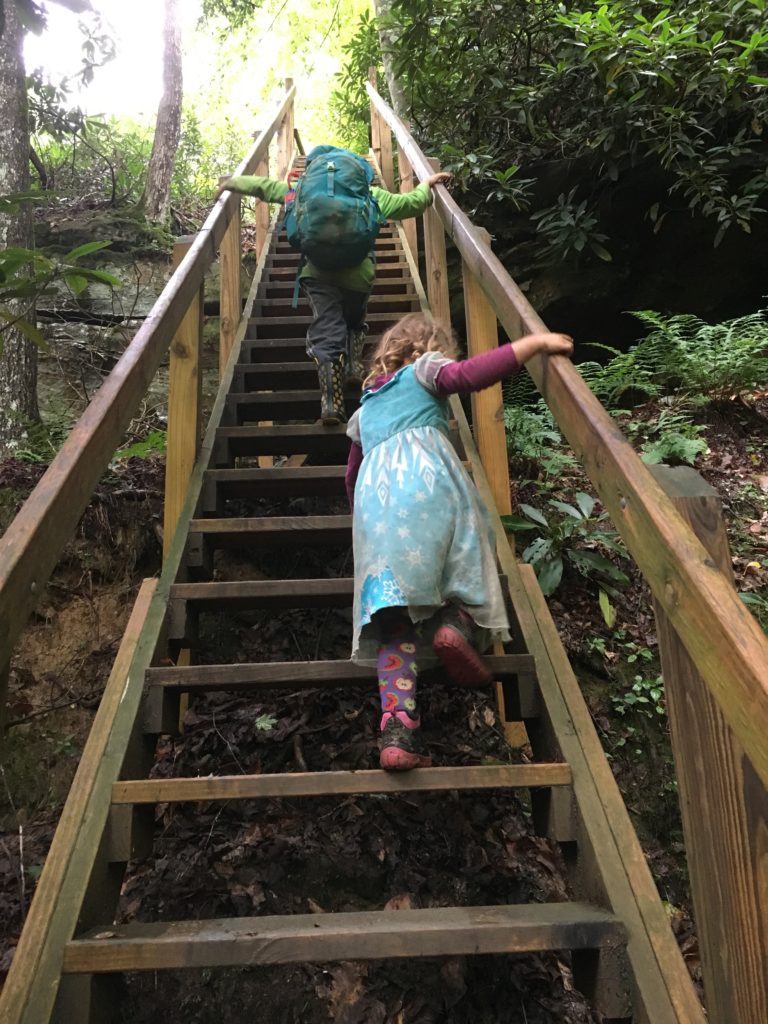 The second go started a little bit better – I initiated the crux and made the first hard move to get the 3rd bolt clipped.  The next bit wasn’t pretty, but I bobbled my way through the sea of pockets and over to a good hold shaped just like an ear that I hadn’t previously been using.  I realized at this point that I actually felt surprisingly good.  I got my feet up and made a move to a flat edge, only to miss it but somehow catch myself on the ear hold.  I took a deep breath and went again, that time I got it.  All that was left was the toss to glory.  The pump clock was ticking as my right hand frantically searched for the correct hold.  I finally grabbed what I could and threw up a hail mary…I felt gravity start to kick in and readied my mind to take the big ride, only to find that I somehow managed to latch the ledge as I was falling away!  After taking a loooong rest on the ledge, I finished up the rest of the route without too much trouble.  Wahoo – revenge was mine!!!

Another highlight on the day was getting the flash on Manifest Destiny 11d, courtesy of a spoon-feeding of beta from the rest of our crew.  CragDaddy also finished his day out on Manifest Destiny, after getting in some solid fitness burns on Galunlati 12b.

Day 2 was spent on the left side of the Motherlode.  CragDaddy exacted his revenge upon Ball Scratcher 12a, sharing a send train others from our group – congratulations to Kristi Cooke for her first ever 5.12 tick, and Michael Johnston for his second!  I spent most of my time on Swahili Slang 12b, a technical masterpiece of funky sandbaggery.  While the style of climbing would be a much better fit at the New than the Red, the movement was perhaps the most unique I’ve ever seen at the grade.  Delicate footwork, creative thinking…and big balls.  If I’m ever gonna send this, I’m gonna have to grow a pair…figuratively, of course.  My first go I stick-clipped my way through 4 of the 8 or so bolts.  My second go I toproped, and actually cleanly linked from the ground to the 2nd to last bolt. 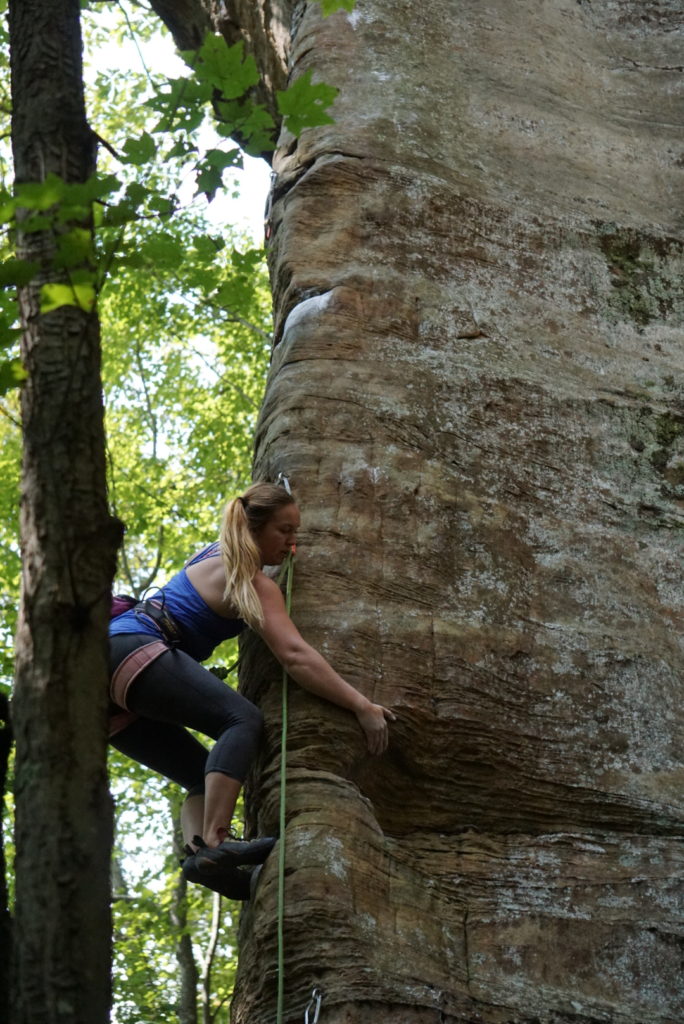 Kristi Cooke keeping it classy on Ball Scratcher 12a

That’s the point where I fall apart.  From an awkward foot ledge that is attained via a “gasthumbdercling” (you know, a hold you hit like a gaston/undercling type thing with your thumb), you stretch out right to a good hold, then romp to the finish on jugs.  But I can’t reach the good hold, I’m not even close.  And because of the awkward hand position on the awkward hold, my hands are tied, figuratively (and sort of literally!) as to how much I can reposition my body.  On the drive home i was visualizing it and potentially came up with another option that MIGHT work.  So I won’t rule it out just yet, but for now I’m not in a hurry to get back to it.

Our third day was spent at Bob Marley crag.  I took a ridiculously long time to gear up for the starting dyno on Toker 11a, then after doing it felt silly that it took so much hemming and hawing. I also took a couple of burns on Beta-vul Pipeline 12a, an incredibly steep jug haul that climaxed with a long toss to a ledge…then a tricky rock over move onto a delicate slab for the last 15 feet.   A 3 hang was the best I could muster, but with a little more fitness later on in the season I think a route like that could go for me.  Honestly, for me just getting to the top of a route of that angle is an accomplishment, so no disappointment here!

While it’s early in the season for the type of fitness one needs at the Red River Gorge, CragDaddy and I were psyched to walk away with a handful of good sends.  SENDtember is shaping up nicely, with trips to the New and Hidden Valley creeping onto the fall schedule.  Where did everyone else adventure to for the long weekend?