“Well, this sure is some slip-sliding fun!” I said with my best fake smile to both of my kids as we made our way down the gully to the base of the cliff.  We’d been hiking for about an hour along a trail that featured a steep incline, several hundred wooden steps, and LOTS of wet leaves.  Our pace had been slow but consistent, in a cold, misty drizzle that didn’t look like it had any intention of letting up any time soon, despite what the radar/forecast showed on my phone.  We were on our way to meet up with a photographer friend of mine who wanted to get some rad “climber amidst fall foliage” photos at our local crag.  Actually, we were supposed to have gone out there the day before… but had rescheduled for the following day since it was raining off and on and “conditions would be better tomorrow.”  (Said in quotes because conditions were in fact no drier, and 20 degrees colder.) 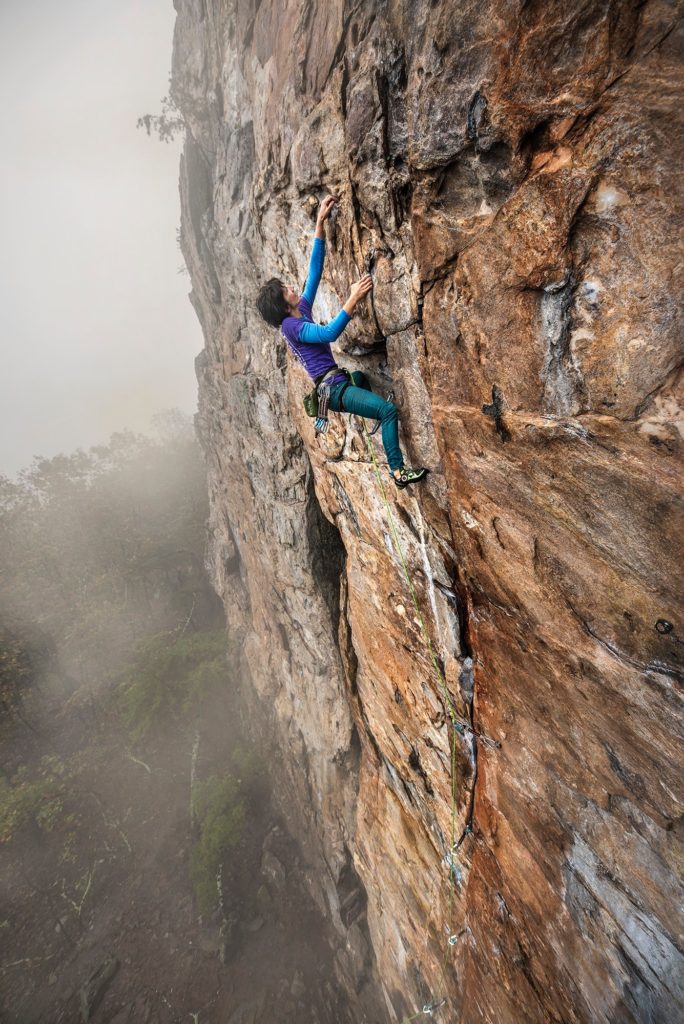 But anyway, after I flashed my best fake smile to the kiddos there was silence for a couple of seconds.  Then my oldest looks up and says, “This is actually not that fun.”  He then proceeds to burst out laughing, at which point his younger sister quickly follows suit.  I wasn’t sure how to read his comment…He was right, of course.  Maneuvering around slick, leaf-laden rocks was “actually not that fun.”  But why were they laughing?  Their demeanor was genuine and silly, not sarcastic.  Perhaps the great alpinist Mark Twight’s famous words “it doesn’t have to be fun to be fun” can apply to children as well as grown-ups?

Our weather woes continued once we met up with Bryan Miller of Fixed Line Media, and our friend Robert, whom Bryan had somehow convinced to meet us out there.  “Splitter conditions, right?!?” Bryan said (now that WAS sarcasm.)  Conditions were downright miserable.  While it was no longer actively raining, the fog was so thick you could hardly make out any trees, let alone delicate fall colors.  But what else could we do…here we all were, and the rock was (mostly) dry and actually significantly warmer than the air temperature.  Let’s take some pictures!

In case you were wondering, there are 335 stairs…we counted.

I got the kids established on their blanket, and passed out food bags and some toys.  Surprisingly, no one had complained since way back when we first started hiking in (the little one ALWAYS takes a while to get her hiking mojo going.)  Everyone looked warm, happy, and in the process of being well-fed, so I decided to take a warm-up lap while Bryan rigged the ropes on the route he wanted to shoot.

I was about halfway up when I heard a commotion coming from the kids’ area, followed by my oldest shouting up to me that his sister had peed in her pants.  I looked down to see my youngest with her pants around her ankles.  Sigh.  “Mommy, I’m cold!  I need you to snuggle me!”  she shouted pitifully, extending her arms up as high as she could, as if she could pluck me from the wall.  That’s when the mom-guilt started in…”Why are we out here?!?!?  What mother takes her children out in conditions like this!?!?” I berated myself inwardly while I outwardly tried to direct big brother to the bag of spare clothes on the ground (as my belayer patiently waited.)

I lowered as soon as I could and put fresh clothes on my daughter (since of course the only step towards clean and dry clothes that had been made while I was up was the taking off of her shoes…which did NOT help with the cold situation.)  After dry clothes and the requested amount of snuggles it was time to shoot photos.  I managed to release myself from the snuggler’s grasp in exchange for my soft shell AND puffy jacket.  The route Bryan had chosen to photograph was Energy Czar 10d, for the aesthetics of it’s features, as well as the backdrop behind it (the latter of which was completely invisible at this point due to fog.)  He’d wanted me to do 2 laps, so that he could shoot from both sides of the route.  The route is not very tall, and I climbed fairly quickly, but by the time I was starting up on lap 2, youngest child was no longer satisfied with snuggling with the “mommy jackets.”  The mom-guilt continued to build.  I pictured my daughter lying on the couch in her therapist’s office as an adult, recounting the time I abandoned her on a blanket in the cold, wet woods to scale a cliff.

Z’s demeanor improved dramatically the moment I got down, but only so long as she was attached to my lap, which made packing up difficult at best.  By the time we were ready to hike back out my inner monologue had me convinced that I was an unfit mother for my children and that DSS could potentially be waiting for me in the parking lot.  But then we started hiking. 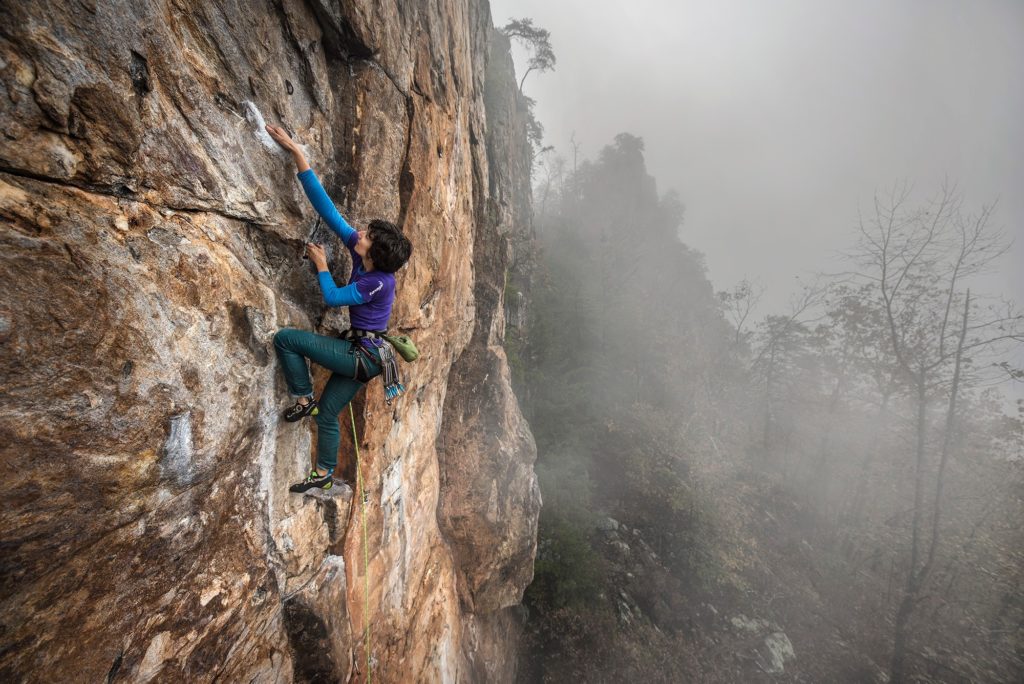 Within 5 minutes we were back at the soggy, leafy scramble that had sparked my “slip-sliding fun” comment.  The giggling started up again.  Along with some very melodramatic “whoa-oa-oa-oah’s!!!!!” that turned into even louder giggles.  Both children transformed into Mexican jumping beans on the wooden staircase, and by the time my wobbly knees got down to the wider, main part of the trail, they were “gone.”  Said in quotations, because I could clearly see my 3 year old about 30 feet away, standing very still behind a tree that covered up approximately one third of her body, with her eyes fixated on a large rock that had a suspicious flash of orange puffy exposed on the far side of it that looked remarkably like big brother’s jacket.

“WHERE DID MY CHILDREN GO?!?”  I speculated loudly as I kept walking.  More giggling ensued.  “I can’t find them anywhere?!?”  I said, and paused.  Wait for it…. 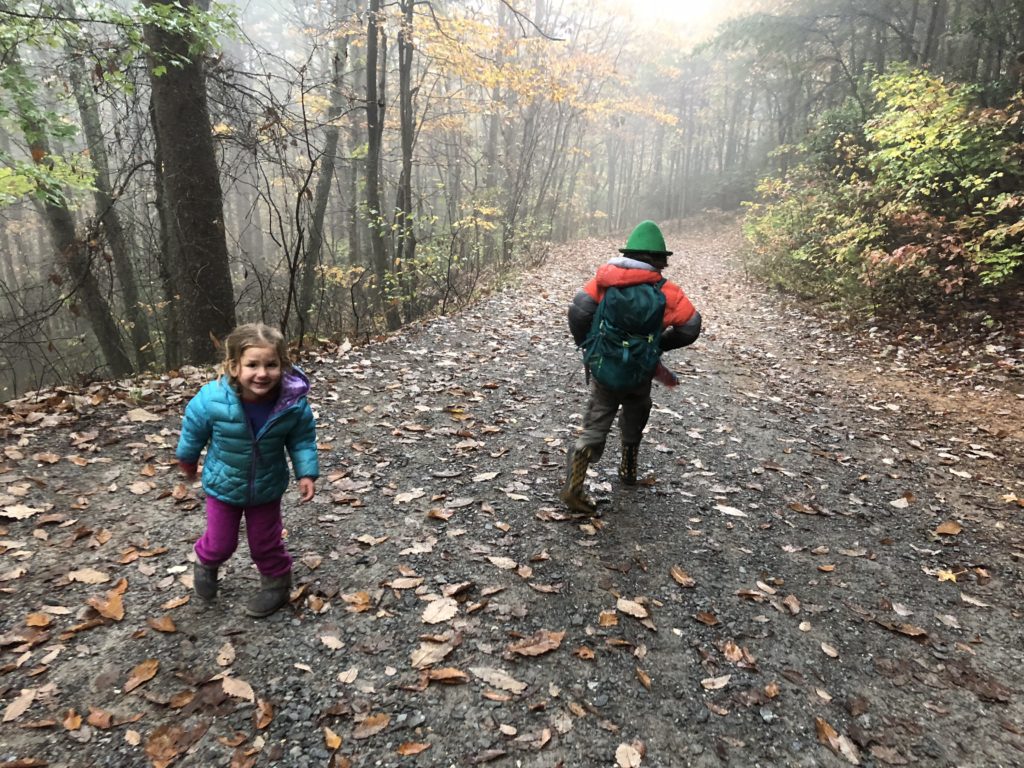 “BOO!”  They jumped out from behind their respective hiding places like a flock of wild banshees, hooting and hollering in circles around me for a few moments before taking off again to find another place to hide.  And so the hike went, for the next 30 minutes.  Their grand finale was when they caught glimpse of our friends, whom we hadn’t waited for to hike out, knowing that they would catch up with us at some point.  Both kids dove into opposite directions off the trail into a drainage ditch.  The stayed there for several minutes as our friends approached, waiting for the perfect moment to reveal themselves.  The moment finally came, and the last section of hike before the parking lot was littered with laughter on all sides.

As our friends drove away and I loaded my crew into the car, I looked at the two dirty, happy faces smiling back at me and my heart overflowed with gratitude.  Gratitude for these little people who turned what should have been a miserable afternoon into a happy walk in the woods.  Gratitude for the chance to make memories with these people, especially the type 2 fun memories that we’ll retell again and again, maybe even to their children’s children one day.  And you know what?  As they chatterboxed the entire way home, that mom guilt started to slowly but surely fade away.  Clearly none of us were any worse for the wear after our wetter-and-colder-than-expected adventure.  In fact, one could make an argument that we were even better off! 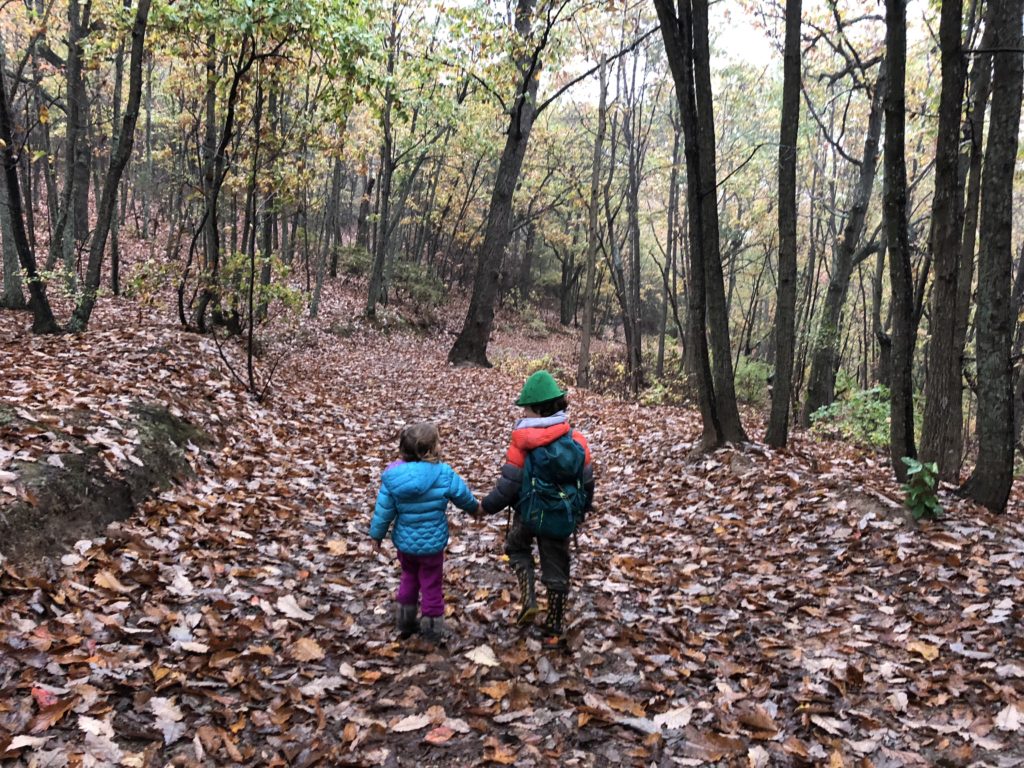 When I remember to look at life through those gratitude lenses, I become a lot less worried about being (or rather NOT being) a perfect mom.  While I am a far from perfect mom, I can say without any doubt that I am the perfect mom for MY kids.  And while they are most definitely not perfect kids, they are the perfect kids for ME.  And I hope that we always help each other remember how to make lemonade out of those sour lemon kinda days!

Many thanks to Bryan Miller for the photos, Robert Hutchins for the belays, and to both for academy award winning death scenes after being shot by a 7 year old with a capgun…all 457 times.  All things considered, I’d say the pictures didn’t turn out half bad!  (Oh, and if you liked this, you might also like this one from the archives – “Type 2 Mountain Biking Fun with a 4 Year old.”)