Did your post-Thanksgiving plans include shop til you drop or #optoutside?  As you might have guessed, ours involved the latter.  The forecast was beautiful for the early part of last weekend, so we squeezed in a quick visit to our favorite east coast climbing destination for a half day Friday and full day Saturday. 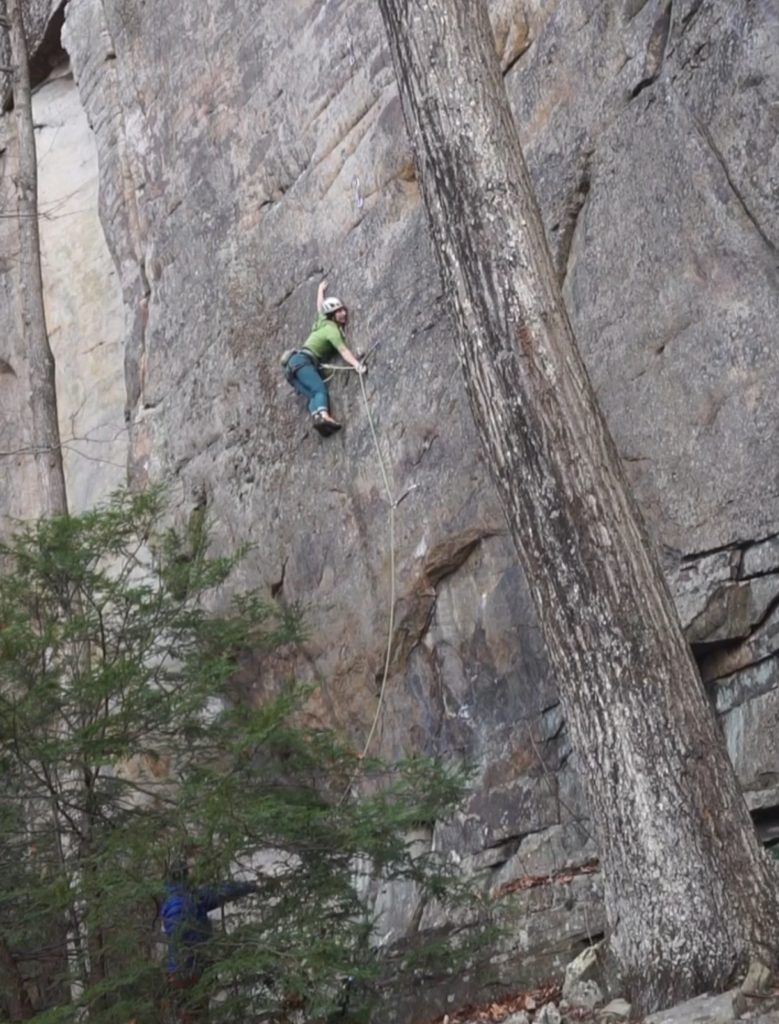 Reachy 11+ section on Ruchert Motion 13a

All we had time for on Friday afternoon was a couple of pitches each at Bridge Buttress, and despite our best efforts, we just couldn’t pull anything together.  I tackled an old nemesis of mine – Stretch Armstrong 12a, while CragDaddy tried his hand at Team Machine, also 12a.  I’d been on Stretch before a handful of times, but never felt close to sending it.  The route is very appropriately named, and my crazy beta was far too desperate to link on point.  This time however, I was able to work out a slightly different sequence that felt a lot more doable.  It was very committing, and felt every bit of 12b/c, but it seemed like it would work.  Unfortunately, when my turn was up again, I just couldn’t get the job done.  The kids started arguing, the sun never quite came around so my hands got really cold, one kid started crying, I wasted a lot of energy trying to remember a sequence down low, other kid starts crying, and so on and so forth.  By the time I got to the crux, my head was far too distracted to commit to the moves.  I hung, then did the moves first try.  Ugh.

The 1st world problem woes continued with CragDaddy’s turn on Team Machine.  Due to fading light, cranky kids, and several scary sections, he opted to toprope rather than lead it.  The crux had taken him forever on round 1, and he figured it was still so low percentage he might as well toprope it…but of course he did it clean, earning him the dreaded “toprope-send.”  Womp womp. 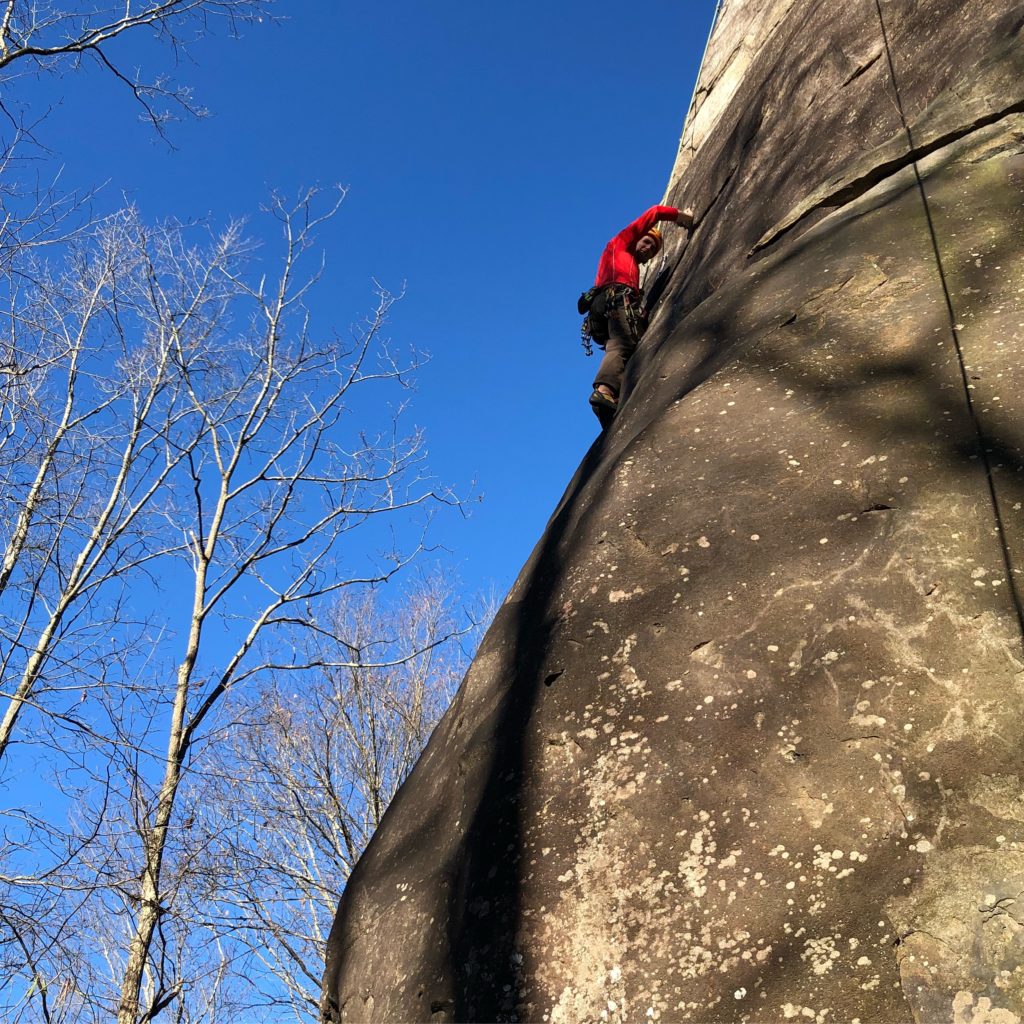 But despite the fruitlessness of our Friday endeavors, everyone woke up Saturday in good spirits, ready for the main event.  For over a year, we’d been eyeing The Ruchert Motion 13a out at Beauty Mountain.  With newfound confidence from our last couple of trips to Hidden Valley, I was ready to give it a whirl.  Conditions were darn near perfect – low 40’s in the morning, low 50’s by afternoon, plenty of sun at the base of the cliff for the kids to “bask” in.  (During the morning hours, they laid around on the rocks pretending to be king cobras waking up from hibernation.)

My first run, however, was far from perfect, and I was actually pretty discouraged.  In hindsight, it probably would have made more sense to warm-up on something else first, but psych was high so we jumped right in, knowing it would take us a while to get the draws in. The Mountain Project entry describing the first few bolts as “reachy 11+” also played heavily into our decision to skip a proper warm-up…but that description proved to be wildly inaccurate, at least for CragDaddy and me. 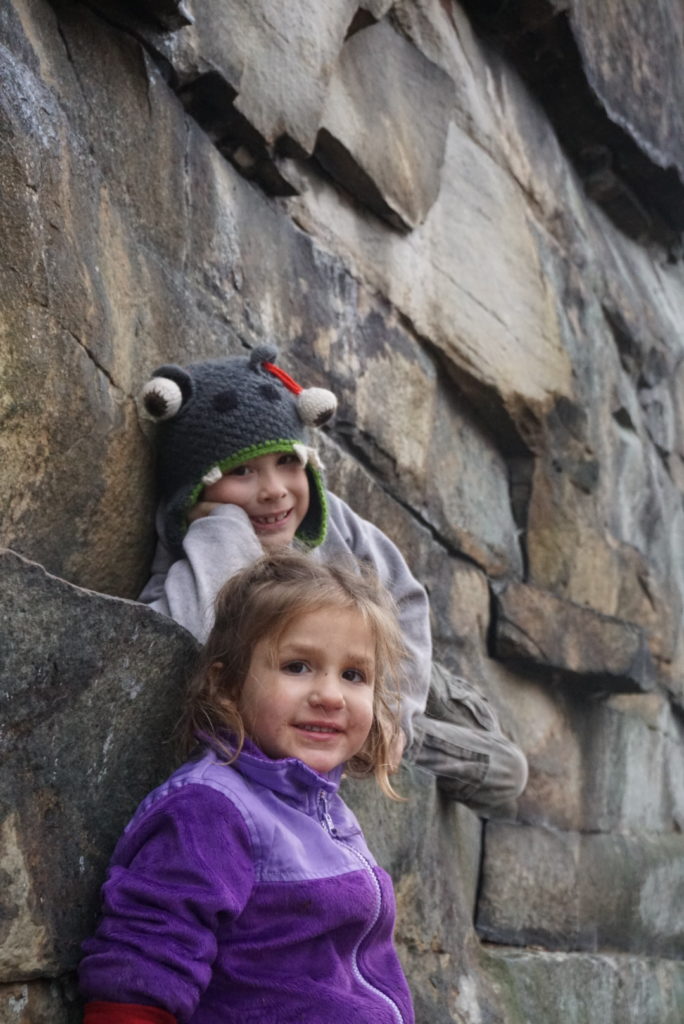 You know, just bassssking around at the crag.

After flailing around for about 15 minutes, I skipped the opening moves and THEN climbed through a couple of bolts worth of what I could see described as reachy 11+.  Then came the crux, and my first attempts were dismal.  I stick-clipped my way through, then flailed through the next sequence that, while easier than the crux, was still pretty hard.  The last 20 feet was really fun 5.10 climbing (the kind that makes for a great, actual warm-up), but by the time I got to the top I was more exhausted than warmed up, and lowered straight down without trying any of the moves again.

CragDaddy’s experience was similar, and when he got down, we took a nice long break to eat leftover pizza and “bask” with our King Cobra children.  The kids then moved to a different game involving catching “crabs” on an island boulder stranded in a sea of leaves, so at CragDaddy’s encouragement, I took the opportunity to have second go on Ruchert.  This run was decidedly better.  I still couldn’t touch the first move, but my fingers were a lot more warmed up by this point, and and I WAS able to do the crux moves.

I was feeling very encouraged after my 3rd burn, especially when I actually was able to do the first move when I tried it again on the way down!  My 4th go, however, was the best yet – I only hung in two spots!  (And it should have been just one, but I botched a foot in one of the reachy moves before the crux.)  When I got to the crux I was pretty tired and starting to get a little sloppy with my feet, but I managed to get through it after a few tries, and was then able to shake out enough post-crux to finish the climb clean.

The weather was forecasted to be drastically colder and cloudier on Sunday, so we headed back home Saturday night.  Judging by how wrecked my arms felt when I tried to rake leaves the next day, it was the best decision!  But that said…it feels awesome to have something “in the hopper” at the New again!  So many times I feel like I have such a love/hate relationship with the New because of all the times I get shut down on long moves.  But this one is gonna go down!  And hopefully sooner rather than later! Fingers crossed for this weekend, because if it doesn’t go down Saturday or Sunday, I’m gonna have to wait til spring!

4 Responses to “NRG at Thanksgiving”