This fall has featured some pretty goofy weather conditions.  October was hot, November was wet, and December is…perfect?!?  Our NRG season typically wraps up before Thanksgiving.  After that, the days are so short, with frigid mornings and evenings, and nighttime temps that drop below our enjoyable-camping-with-kids threshold.  It’s also not uncommon to contend with snow, so even a stray warm day can end up wet.  Not to mention the holidays are coming, and we want to focus on that!  But Thanksgiving  weekend brought fantastic weather we couldn’t pass up…and we both put good work in on The Ruchert Motion 13a.  And when we saw that the forecast was just as good for the following weekend, we had to go back and bring our try hard. 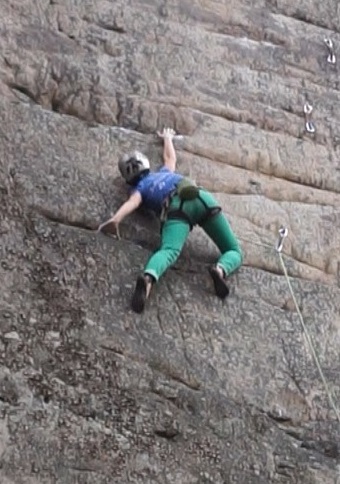 The press out move…thankful for every inch!

But the kink in our plans was poor CragDaddy, who rolled his ankle  just one move away from sending a sick new V13 in our backyard no one knows about and never will because it imploded back into earth upon CragDaddy’s impact. 😉 Thankfully the “incident” turned out to be just a minor sprain, and by the time the weekend rolled around, he was pain-free with just an annoying amount of swelling.  He could toprope all day long…but going “a muerte” on his project still didn’t seem wise.  So unfortunately for him (but very much appreciated by me), the only things he was able to bring to this NRG double bonus weekend were superior belay skills, encouraging pep talks, and camera management skills.   Actually, before you feel too sorry for him, he DID manage to sneak in some try hard on his toprope burns, and I’m confident that he’ll be ready for Ruchert Motion next spring.

But all joking aside, I am very grateful that CragDaddy was still up for making a trip that was undoubtedly more fun for me than it was for him.  I definitely owe him some “support services” time back out there this spring.

And thankfully, I made it worth his while.  It took 4 go’s, but I finally put it down at the end of Day 1.  My confidence was a rollercoaster all day.  The first burn was a warm-up, and I yarded through all the hard moves – the opening move, a tipped out move in the middle that is hard on my wrist, and the entire crux.  There’s another kinda hard sequence after the crux but it’s not tweaky, so I went for it but came up a little short and took a fall on an extended right shoulder that did not feel great.  It hurt for a few minutes but then seemed fine (and left me thankful that I’ve been doing all those little stabilizing exercises on the regular!)  Once I clipped the chains, my fingers were a lot warmer and I rehearsed all the hard moves as I lowered. 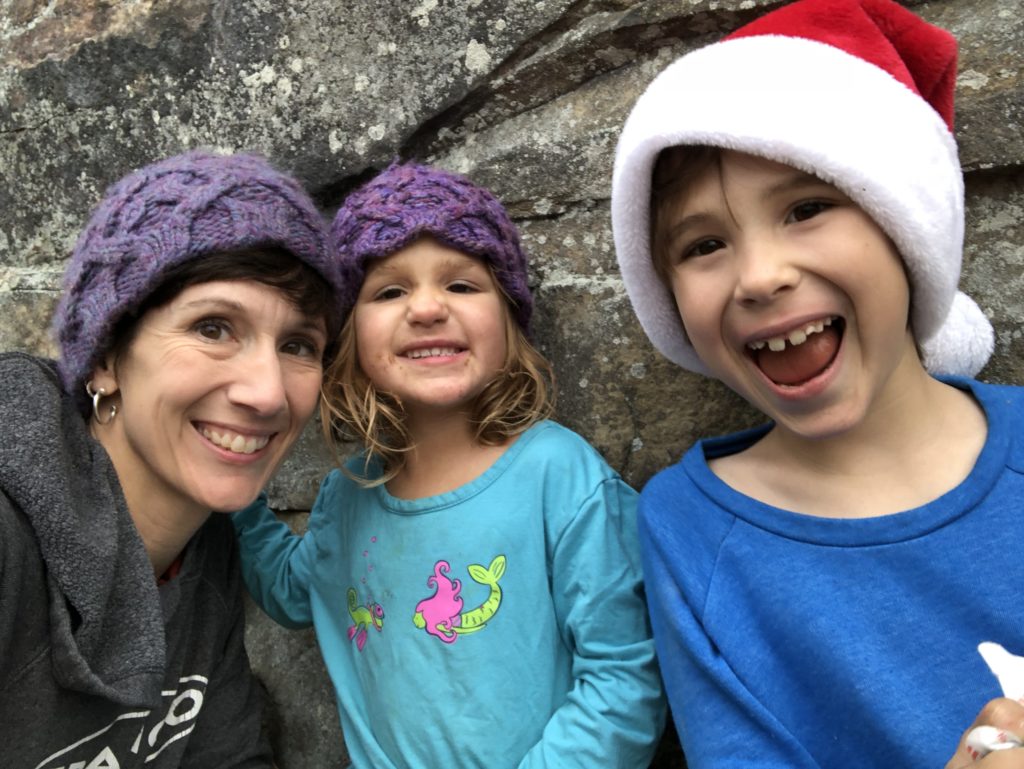 My 2nd burn felt awesome.  I made it all the way to the crux without too much difficulty. Things were actually going so well that I unknowingly got my left foot up higher than I had been, which threw off my balance at the end of the crux, and my right hand slipped off a split second before I could move it to the next hold.  After a quick hang, I finished it up, and lowered off feeling very optimistic.

But my 3rd go I didn’t even make it to the crux.  I fell in the reachy 11+ section on the move that is hard on my wrist.  This particular move has me completely pressed out to my fingertips, then making a desperate pop to a jug.  I played around with some different beta, and found a sequence that was a little higher percentage.  The only down side to the new beta was that it was harder on the skin, which at this point, was at a premium thanks to that sharp little hold I dry fired off of on my previous burn.  Rather than exfoliating my finger tip any more by trying the crux on a non-send burn, I opted to just come down rather than rehearse it again, since splitting a tip would mean game over for the day.  Confidence plummeted. 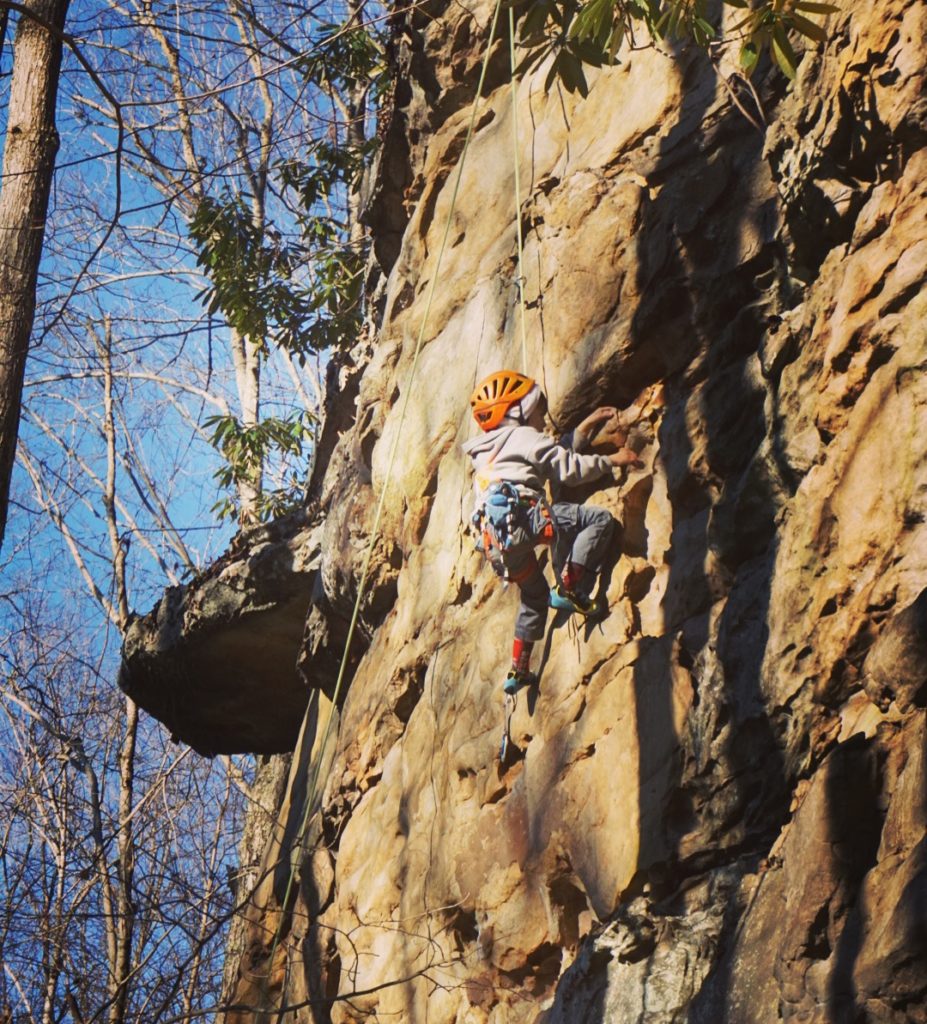 4th go.  The opening move, the one that thwarted me all but twice last weekend, continued to go well.  I winced as I cranked out the new beta for the press out move, but was relieved when I glanced down at my finger tip and didn’t see any blood.  There’s a great rest stance after that, and I stayed there a good long while.  I moved through the next moves smoothly, made the clip, and entered the crux traverse.  The holds are heinously small, so I went as quickly as I could.  I was red-lining as I got my feet up to make the big exit move to the jug, but I held on for all I was worth and stuck the hold! 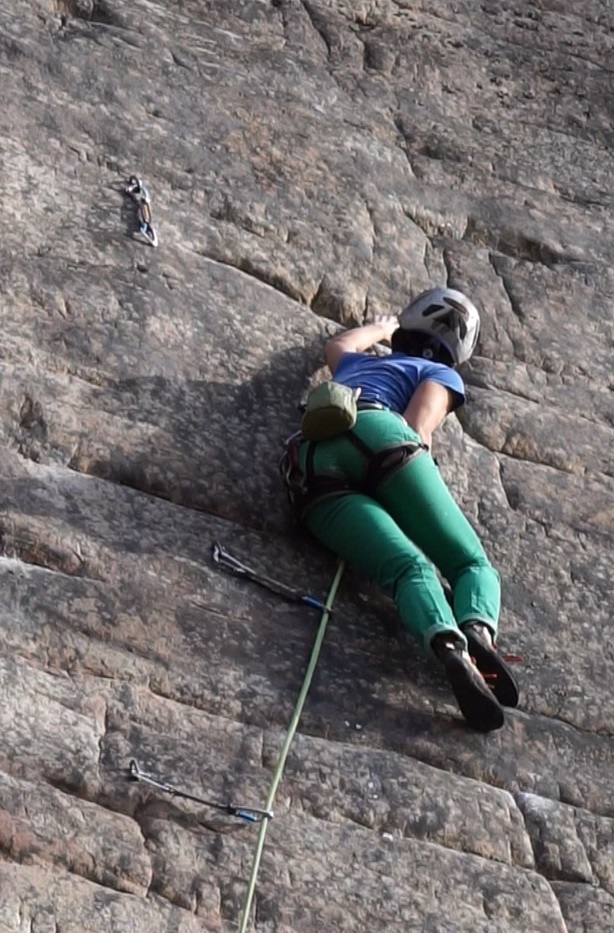 All that was left between me and the last 20 feet of 5.10 land was the kinda hard traverse I’d fell at the end of on my warm-up.  The move getting into this traverse is never smooth for me.  The holds are an easy reach for CragDaddy, but it’s very awkward for me to get both hands established on the traverse holds, so I have to smear my foot on a very slippery hold and do a weird move that we christened the “donkey kick.”  Every time I do it, I’m afraid that foot is going to blow off, but it never did…until this time!  Luckily, it was just after both hands were on, so I managed to hang on.

The only other issue came in 5.10 land when I thought CragDaddy was short roping me, but it turned out to be my tail knot stuck in the bottom biner of the quickdraw.  ?!?  Never had that happen, never heard of it happening, but thankfully it was an easy fix.

And…woohoo!  A perfect end to a fabulous fall climbing season!  Actually to be accurate, it wasn’t quite the end yet.  We climbed the next day too – CragKiddo got a chance to crush at the Meadow, and I got a chance for revenge on Stretch Armstrong 12a, the route I’d chickened out on the previous week.  CragDaddy looked longingly at Team Machine 12a, the route he’d “toprope sent” the previous week, but decided not to risk a lead fall, especially on that particular line, as its scary even with two good feet.

It’s pretty difficult to get good pictures when it’s just us and the kids, but CragDaddy did manage to set our camera up in a nearby tree to get some video footage.  Full disclosure, it’s not great – in order to get the whole route we had to shoot vertically.  And I climb painfully slow so it’s not exciting at all.  But it at least captures the moves and rad-ness of the line.  The zoomed in crux shots were taken on the sending go, but the rest of the footage is from other burns throughout the day.  We put it to music to make it less boring and also drown out the kids talking a little bit.  If you’d like to check it out, go here.  (And please excuse the try hard sounds on the opening move…)

I hope everyone had a great climbing season, and since it’ll probably be pretty quiet on the blog around here until after the new year, I’d like to wish everyone a very happy holiday season!  See you in 2018 and thanks for reading! 🙂

6 Responses to “The Ruchert Motion 5.13a – Grand Finale at the NRG”