Spring in the southeast has gifted us with just about the absolute worst weekend warrior climbing weather we could have asked for.  But we’ve got not choice but to go with what we’ve got, right?!?  Whether it’s Amazon-level heat and humidity at the New, or monsoon flood warnings at Hidden Valley, our cragfamily has been out there trying hard the past few weeks! 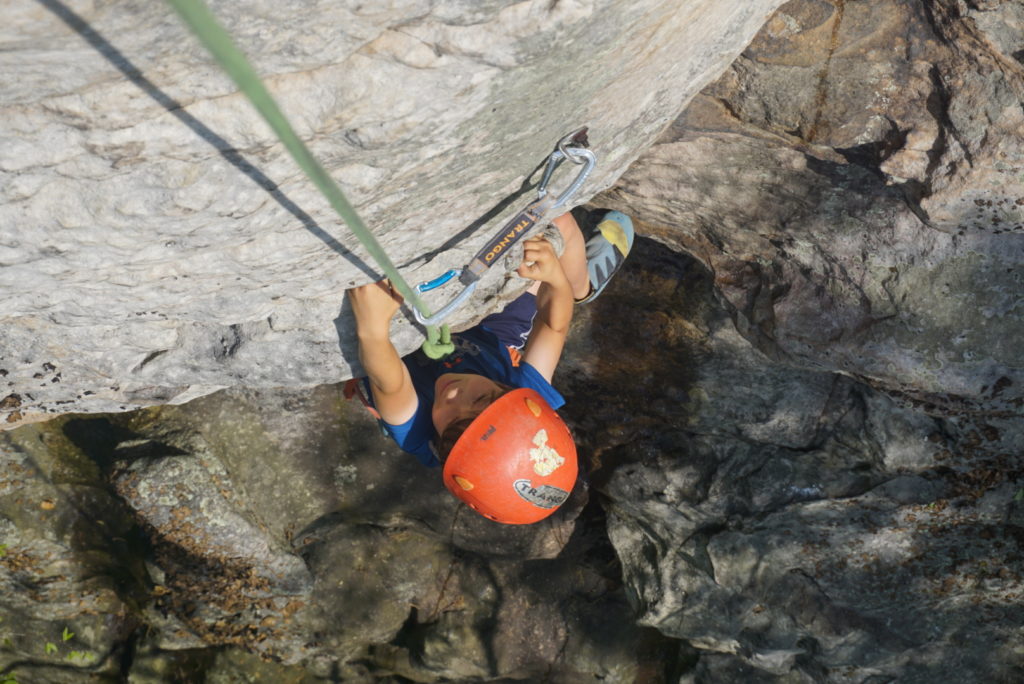 Our Mother’s Day spring-that-felt-like-summer weekend ended up being a lot more profitable than we’d first anticipated.  On our first day we went to Area 51 at the Meadow.  Amongst several moderate lines, CragDaddy and I were classy enough to dispatch “If You Lick It, She Will Come” 12a, a nice little technical line that probably deserves more traffic than it gets.  Big C got a chance to enjoy the view atop Free Range Show Poodle 5.8, and both cragkiddos got to frolic in the woods all day with the Old School Crag Kids of the McDermott CragFamily (their older kiddos even have their own climbing podcast – check it out here!) 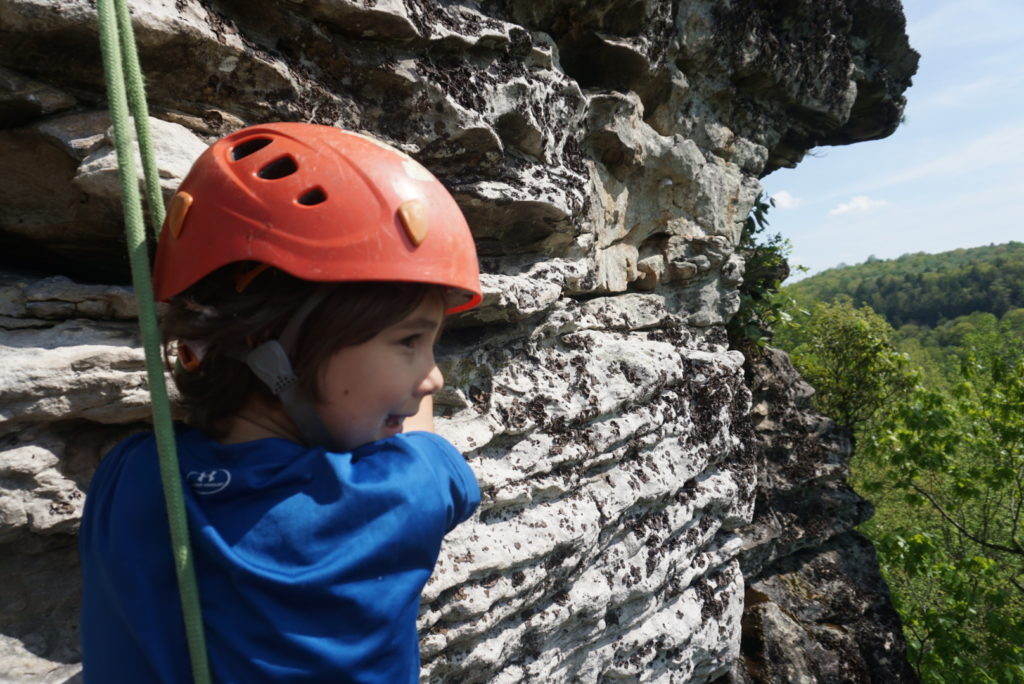 This kid is highly motivated by the promise of a great view!

Our second day, we ventured away from the crowds to try our hands at Wall Drug 12c.  The real business is all in the first 3 bolts, although the rest of it isn’t a gimme, as I could definitely envision falling pulling the final moves over the roof.  I did all the moves and made some decent links on my second go before melting in the sun on the upper face.  This one probably needs to wait for better conditions, but will be a great candidate for a fall project! 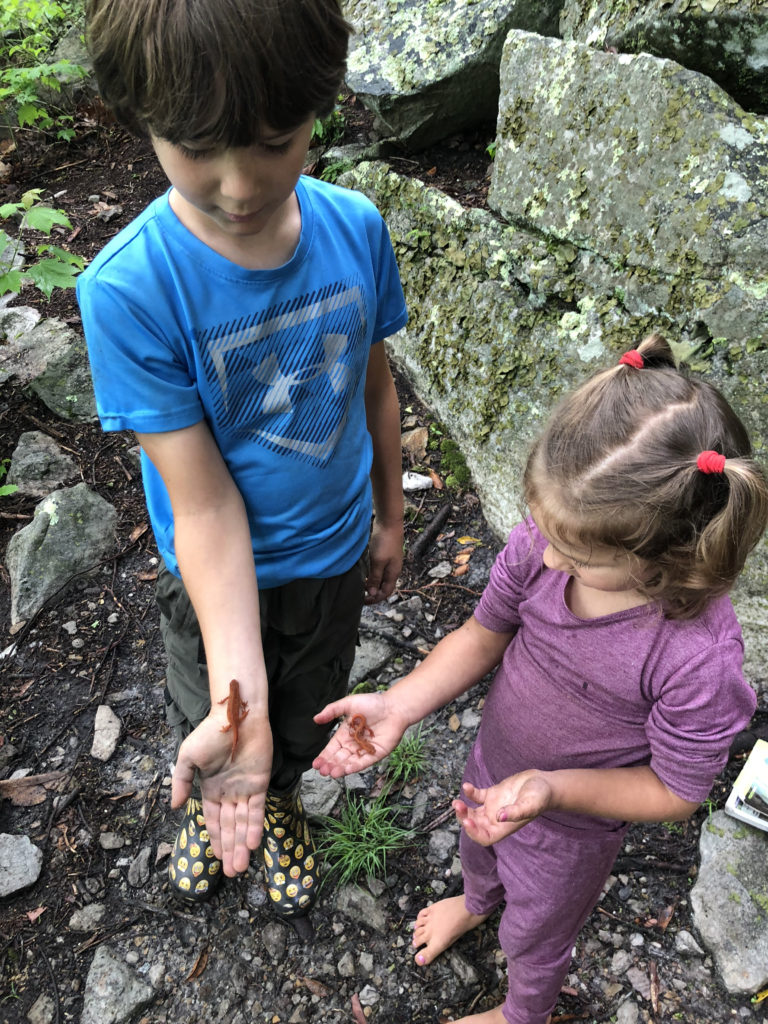 Fast forward a couple of weeks (and a beach trip…and a wedding) later, and we found ourselves splashing around the base of the cliffs at Hidden Valley.  Seriously, it was a water park.  Routes that I’ve never ever seen wet were literally running with water.  There was even a roaring waterfall coming down out of a generally dry chimney.  Needless to say, our first afternoon was just spent hiking and scouting for the next day’s adventures.  Oh, and making a water slide for our Trolls figurines – not as fun as climbing, but a surprisingly interesting way to pass the time!

Sunday was much better, though the aftermath from the torrential rains the previous day still rendered most routes unclimbable.  But we had pretty good luck in the Planetarium.  We got on 3 routes, one of which was a funky 12a that CragDaddy and I both sent 2nd go called Andromeda Strain.  (Seems like we’ve been all about the 2nd go sends lately…but we just can’t buy a flash/onsight!!!)

We ended our day thrashing around on Death By Chocolate 12d.  It’s a short little number no taller than 50 feet, but it packs a LOT of interesting movement up a sharp arete.  The first couple of bolts are probably technical 11d/12a, then an okay rest with a cool heel/toe cam.  Then the route turns way up until the finish.  CragDaddy stick-clipped his way through, then I toproped…which we then did again. 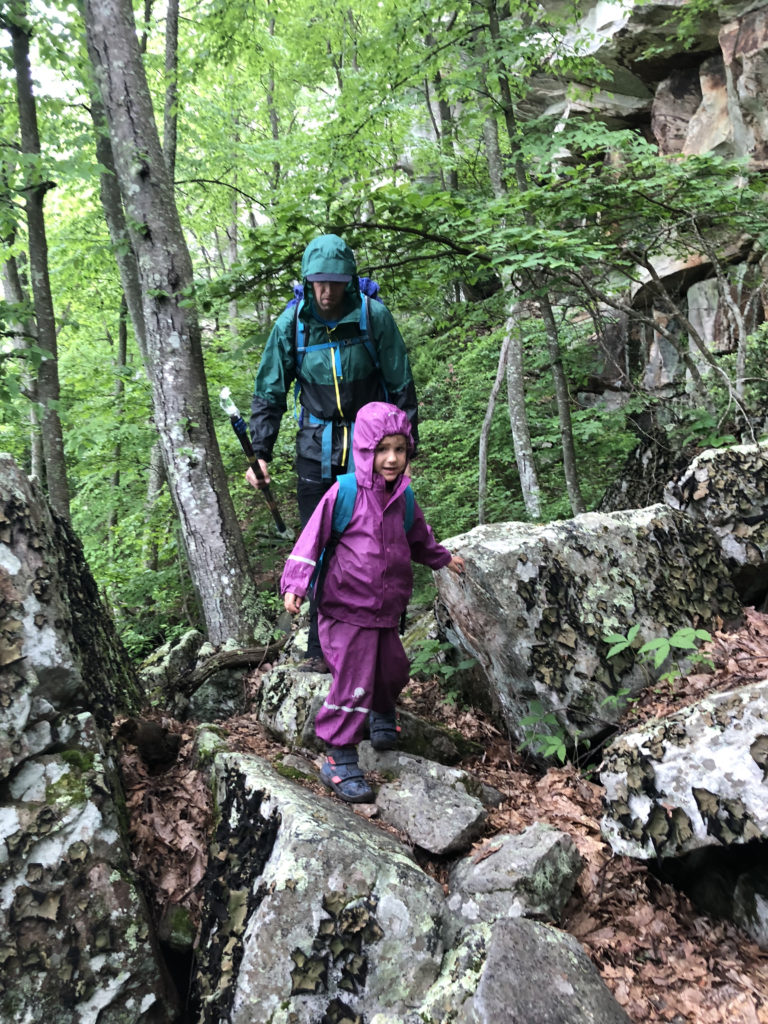 And again and again, the NEXT morning, because the last bolt is virtually impossible to clip!  In our many flailings over 4 burns we each managed to achieve a dicey-at-best clipping stance twice.  Lengthening the draw won’t help – the moves on the arete are just too barn-door inducing to take a hand off.  And short route + even harder moves above the last bolt means skipping it is not an option.  We THINK we did all the moves – although it’s always harder to gauge with toproping.

When the rains came again around 2, our route was still dry, but with the super humid conditions we cut our losses and took the route down, in favor of an earlier home arrival and salvaging some gym time the following day.  This is another one that doesn’t feel like it’ll go down any time soon, but might be prime this fall.

For now, however, I’m turning my attention to the last few weeks of gym training before we head out to Ten Sleep, Wyoming – where we will hopefully be living the high, crisp life of sport climbing at 9,000 feet while the rest of our friends are roasting in the Southeast jungle.  Aaaah, 27 days and counting! 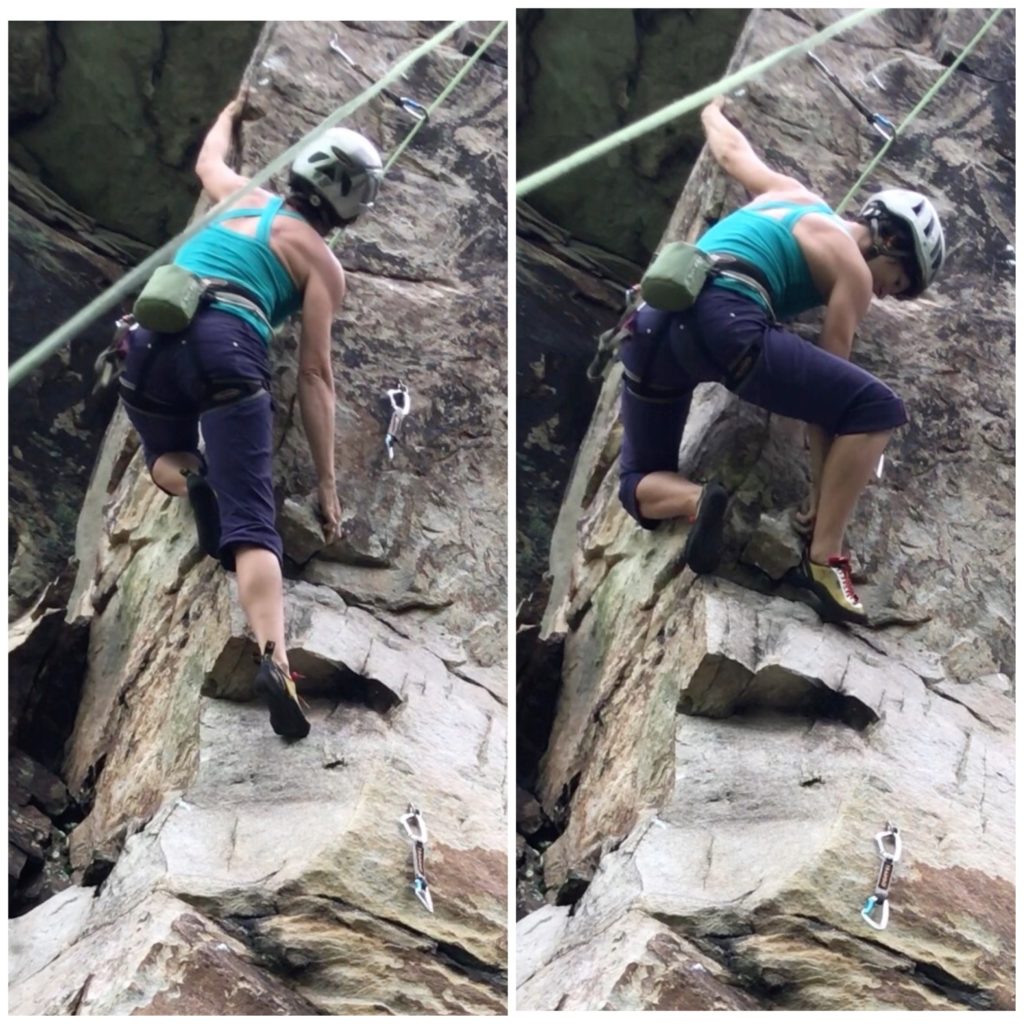