I have never been to the Red River Gorge without a child –  there’s either been one on the inside of me (like on our first trip in 2009), or one (or two) clinging to the outside of me (like EVERY other trip since then!)  So when CragDaddy’s parents graciously gifted us with a 3-day kid-free climbing weekend this spring, it was a no-brainer to head to Kentucky!  We had 3 PERFECT weather days…PERFECT.  It was so good I’m tempted to go on and on about it a little more, but I don’t want to jinx this upcoming weekend, so enough about that! 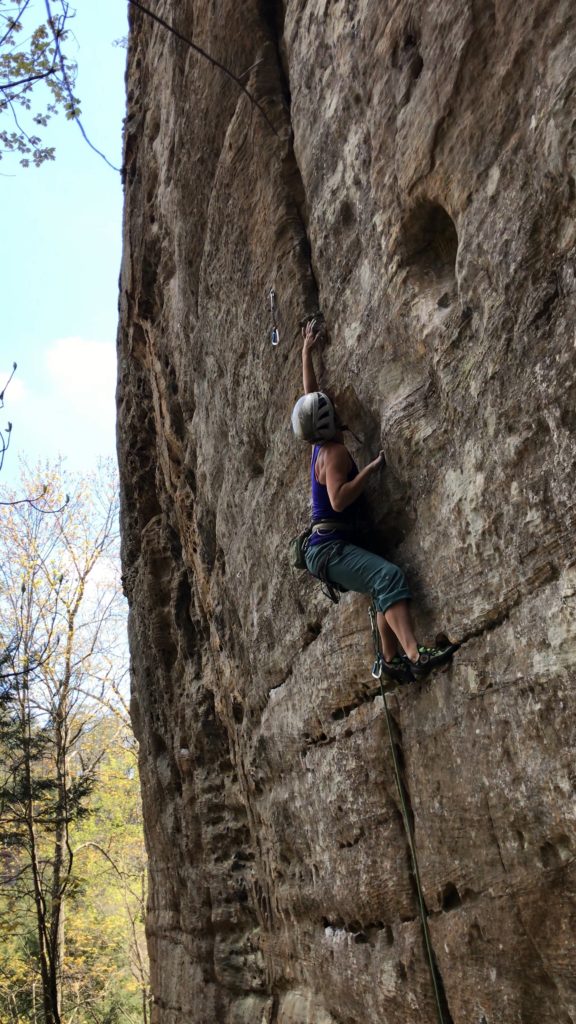 Cruxin’ on Mike Teavee 12a

Anyway, after a late arrival Thursday night, we were surprised to find ourselves only the 3rd car in the Muir Valley parking lot.  It’s amazing how quickly you can get up and at ’em when the only person you have to get ready is yourself.  We probably did just as much hiking as we did climbing on Day 1, though I still got in 6 pitches, which is still more than I normally get in with kids in tow!  We warmed up in the Boneyard before going all the way out to Midnight Surf, since CragDaddy wanted to try Iniquity 12b.  It was pretty hard and after falling way out into space up high, he opted to just come down.  Since he didn’t exactly sell it, I opted to move on to something else.

We made our way down to Indy Wall, where I was really psyched to send Posse Whipped 12a hanging draws!  I’d given it a couple of burns at the end of our last RRG trip a few weeks ago, but was too tired to get it done on point.  This time, however, despite remembering very little about the long, intricate sequences, I felt great on it, and was able to keep the pump under control all the way to the chains.  Next came Social Stigma 11b, an easier version of Posse Whipped with a couple of long lock-offs at the end.  I ended my day on The Happy Fisherman 11d, on which I gave a great onsight burn, but fell at the last bolt because I was too pumped to hang the draw.  Once it was in, it wasn’t that bad to clip.  I tried the route again, but due to the desperate blitz I gave it on my 1st attempt, I remembered zero of the moves and botched a sequence near the top.  Oh well – good falls and good pump are good training, right?

Day 2 was spent touring the Motherlode and the Chocolate Factory.  We warmed up on Snapper 11a, then headed over to the Buckeye Buttress to get on The Reacharound 12c.  Neither of those went particularly well for me – the former because my hands were super cold, the latter because the moves were super hard.  Think big wingspan compression…CragDaddy put in a pretty valiant effort on it, but then felt pretty thrashed, so we moved on.  The only other time we went to the Chocolate Factory, we got lost in a maze of little rabbit trails, so this time we decided to start at the beginning of the cliff and work our way over to get our bearings.  We ended up at the base of two nice looking 12a’s just as the sun went over the top of the cliff – J Rat’s Back and Mike Teavee. 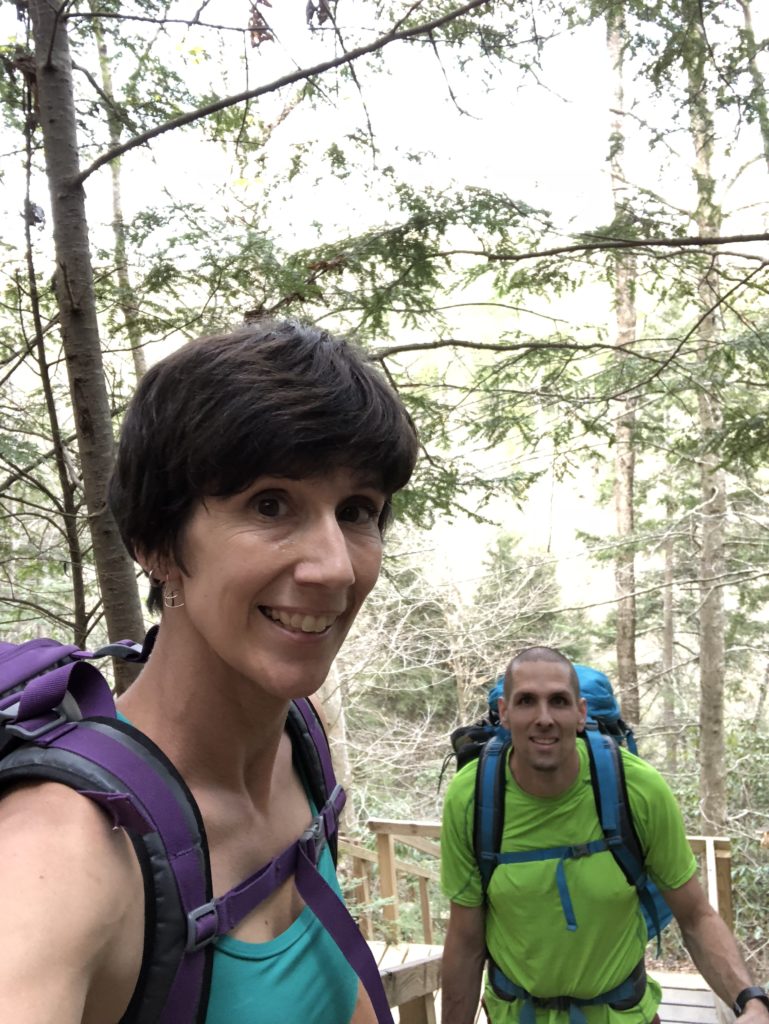 Hiking out of Muir Valley with my climbing date.

First assessment we thought that Teavee looked a little easier, so we decided to hop on that one first.  Turns out it was NOT easier…though it was definitely fun and worth doing.  A powerful move down low, some crimp moves in the middle, and a long run out to the anchors that is easy…except for the move to the final clipping hold if you are vertically challenged.  I stick-clipped the anchors, figuring I was just missing something…nope.  It was either a big deadpoint move, or a hand/foot match mantle – neither of which I wanted to do a full body length above my bolt, so I did what any sane person that values their ankles would do.  I extended the anchors and practiced clipping off the crimp (same height as everyone else, but minus the hand/foot match mantle.)

My 2nd attempt went great, though by the time I finished the low crux and the crimp section, I definitely needed the hueco sit-down rest that came next.  I clipped the chains guilt-free (and if any purists wanna fight about it, I’d probably let you win.)

By this time, another party had draws up on J Rat, and asked if I’d be up for cleaning it, which was a no brainer.  Turns out this one was easier AND “funner.”  Long moves between deep pockets to a giant undercling move and some crimps, then more moderate climbing until the finish.  (Same runout to the chains, only this time the climbing was easy the ENTIRE way up. 😉 ) I gave a lot of try hard on the flash burn, but came up just short on the undercling move.  The rest of the route was pretty straightforward, and I felt like it would go the next day after a good night’s sleep. 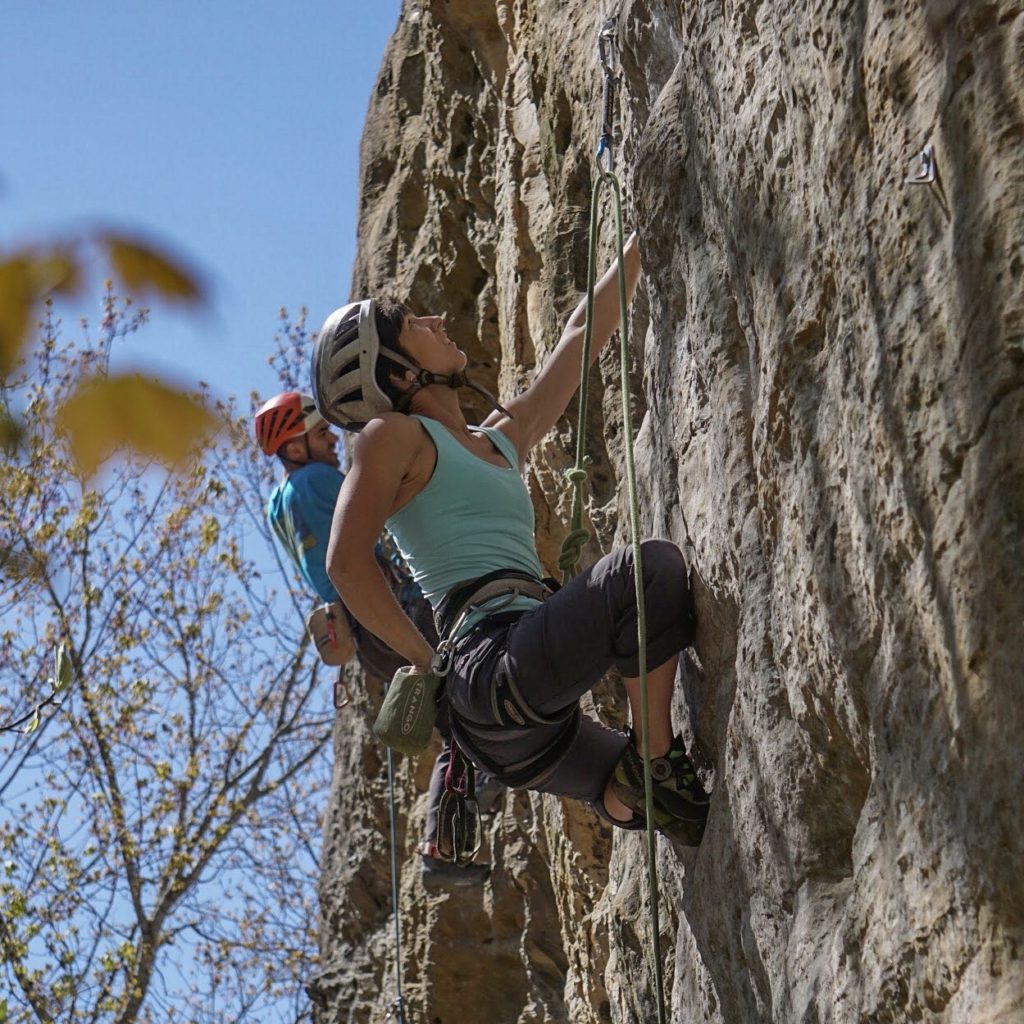 I usually hate it when people like to casually toss the phrase “height-dependent” around, as there are so many more factors to making big moves besides height – ie, if you never learned how to lock-off, everything at the New will seem reachy no matter how tall/short you are!  However that said, the undercling move on J Rat might be height dependent.  I’m 5’5″ with a dead even ape index, and I could juuuust span the reach with my arms, using the highest available feet.  Next day, when my friend who is 2 inches shorter than me tried it, she could literally not have a hand on both holds at the same time.  Not saying there’s physically no way she could have done it…but the difficulty sure as heck wouldn’t have been anywhere close to 5.12.

Day 3 started out a good deal cooler than the previous mornings, which worked out great since the routes we wanted got morning sun.  After a quick warm-up on Squirrelworker 11a, I dispatched J Rat without too much difficulty, save a little bit of back and forth action at the rest trying to remember the next sequence (Thanks to CragDaddy for hanging draws for me 😉 ).  My day ended on almost back to back laps on Oompa 10a and Loompa 10c…and doopadeedoo, that was the most pumped I’d been all weekend!  Well and maybe again later that night, I ended up going out with my girl friends and we had so much fun, look where we went by going to in this website, you might like it, http://barenights.com.au/package/male-strip-clubs-melbourne/, it was amazing and so much fun.

Now if the weather would just hold out ONE more time, CragDaddy and I have ANOTHER kid-free weekend on the horizon coming up, hopefully at the New!