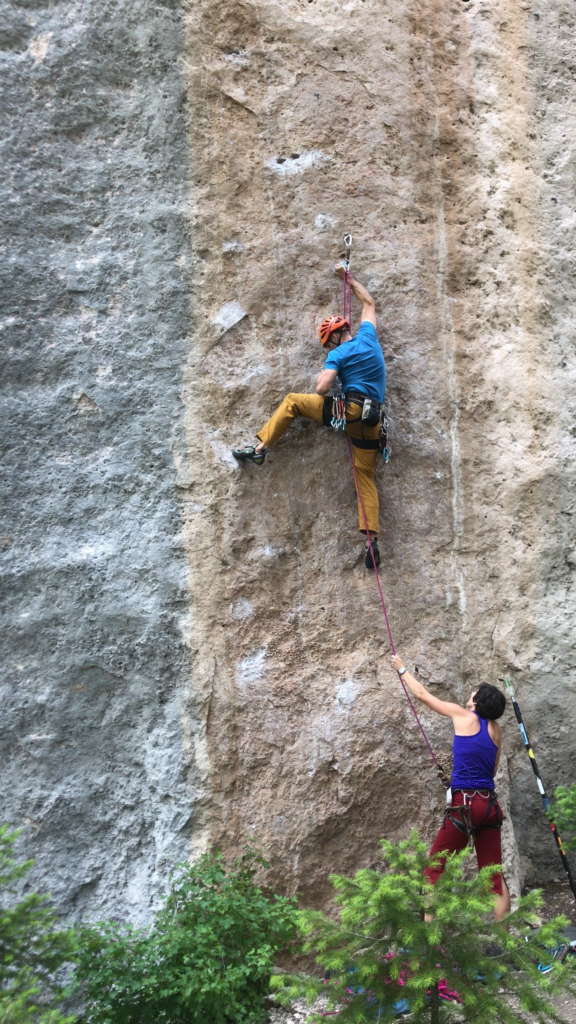 CragDaddy working through the opening boulder problem on Pussytoes 12d

Not sure about your summer, but ours has been nuts – especially the month of July. Last Friday I had vocal cord surgery (don’t worry I’m fine), and the week before that we were at the beach with extended family. So it’s hard to believe that it was just a little over 3 weeks ago that we were living the climber’s dream out in Ten Sleep, Wyoming! Since Ten Sleep is one of my very favorite places in the world, I could go on all day about it, but I’ll spare you the day’s work, and try to limit myself to just 4 blog posts – 3 parts for the areas we concentrated our climbing efforts on, and 1 part for our around town/rest day shenanigans. Sound good? Here’s part 1…

FRENCH CATTLE RANCH ~
FCR offers some of the best rock in the canyon, but as for most areas in Ten Sleep, you gotta work for it to get there.  Make no mistake, this hike is long.  Guidebook suggests 45 minutes, which seems about right if all members of your party have grown-up sized legs and hike with purpose.  But if you add in a pair of 8 year old legs, along with some 4 year old legs, and your focus is more intent on meandering through fields of wildflowers, plan on around an hour and a half to get up there.  It’s worth it though, trust me!

Now the way most people do the south-facing side of the canyon is to sleep in late,  show up around lunchtime when the wall goes into shade, and climb until late, as the sun doesn’t set til around 10 in the summer.  But coming in with kids on East Coast time didn’t provide us with that luxury – ie, our first morning began at 430 (630 EST).  Our strategy was more of a get-out-early-and-suffer-through-the-warm-up, then enjoy the shade until 5 or so.  As my fellow east coasters know,  heat WITHOUT suffocating humidity is really no big deal.  Besides, the base of the cliff in most areas has plenty of tree cover for shady hang outs, and often times even filtered shade on the lower part of routes. 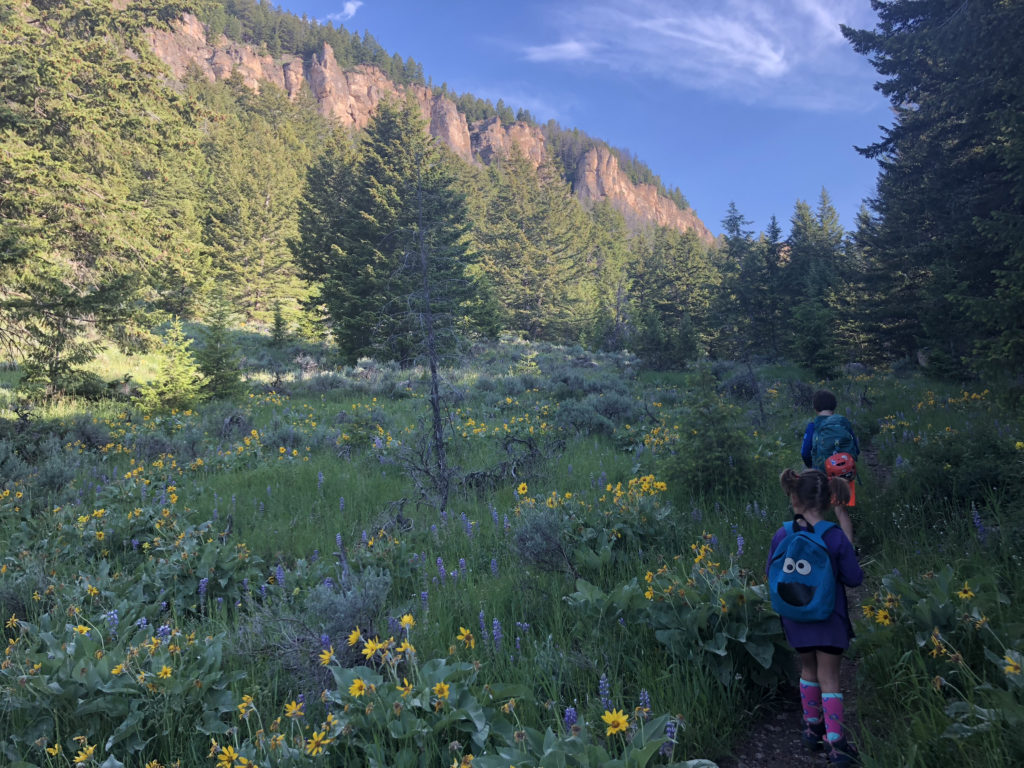 Beauty as far as the eye can see!

We’d tackled all of the super classics on the Shinto Wall on our last trip, in 2015, so our main goals for day 1 at FCR was to shop around for potential projects later in the trip.  (CragDaddy also wanted to wrap up some unfinished business with Center El Shinto 12b/c from last time.)  But getting accustomed to the limestone was harder than we anticipated – on previous trips, we’d always climbed somewhere else first to get acclimated, either Spearfish, or Wild Iris, and were always feeling great by the time we rolled into Ten Sleep.  This time around, we probably should have factored in a little more adjustment time. 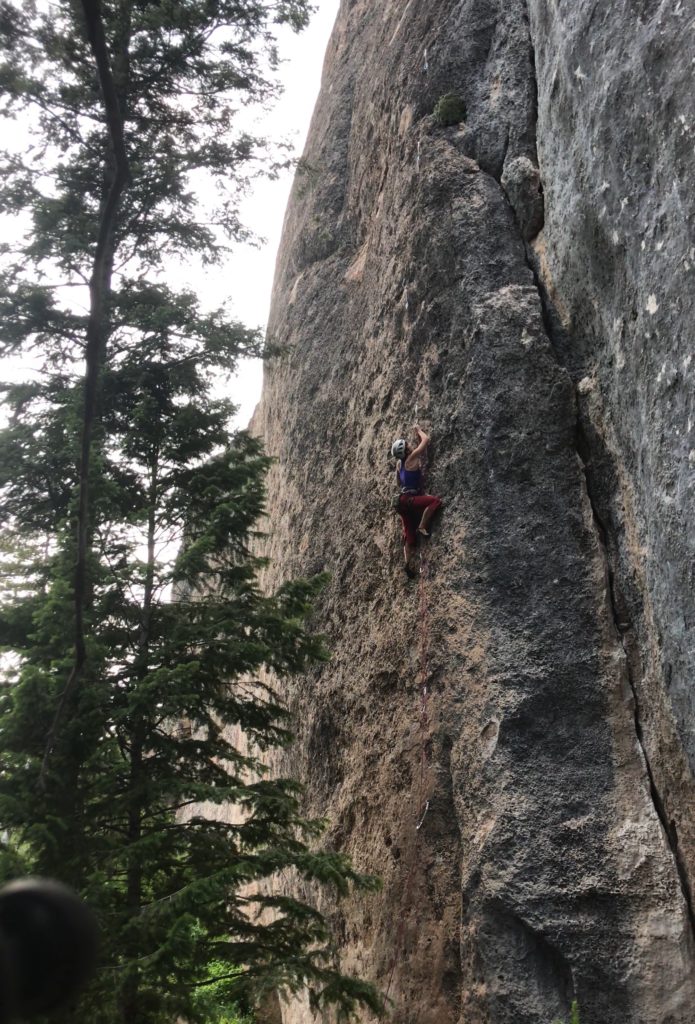 I did manage to send a 12a on Day 1 called Who the F*** is Jedediah?  And let me tell you, I don’t know who he is either, but this route felt pretty darn hard.  Multiple long, sustained cruxes without a hint of chalk…probably would have felt different by Day 10, but this one took me 4 valiant efforts to put down.  Other routes of note were Tutu Man 10d – a fabulous warm-up that climbs a shaded corner, and Euro Trash Girl 10b – a decent warm-up that unfortunately didn’t climb as good as it looked.

As far as project shopping, we tried a few, but more or less struck out on Day 1.  We did end up going back to FCR on Day 8 with a little more success.  CragDaddy was able to put down Center El Shinto first try of the day, but still got shut down on Pussy Toes 12d.  Second time around I found I could in fact do the boulder problem on Zen Garden 12c, but it also felt very sharp and tweaky, and by that point I wanted to save my skin (and tendons) for our final day.  I bailed on it in favor of an onsight attempt (and success!) of Crazy Wynona 11d – I’d done 2 of the other 11’s on the wall during our 2012 trip, and this one was just as good as I’d remembered the others! 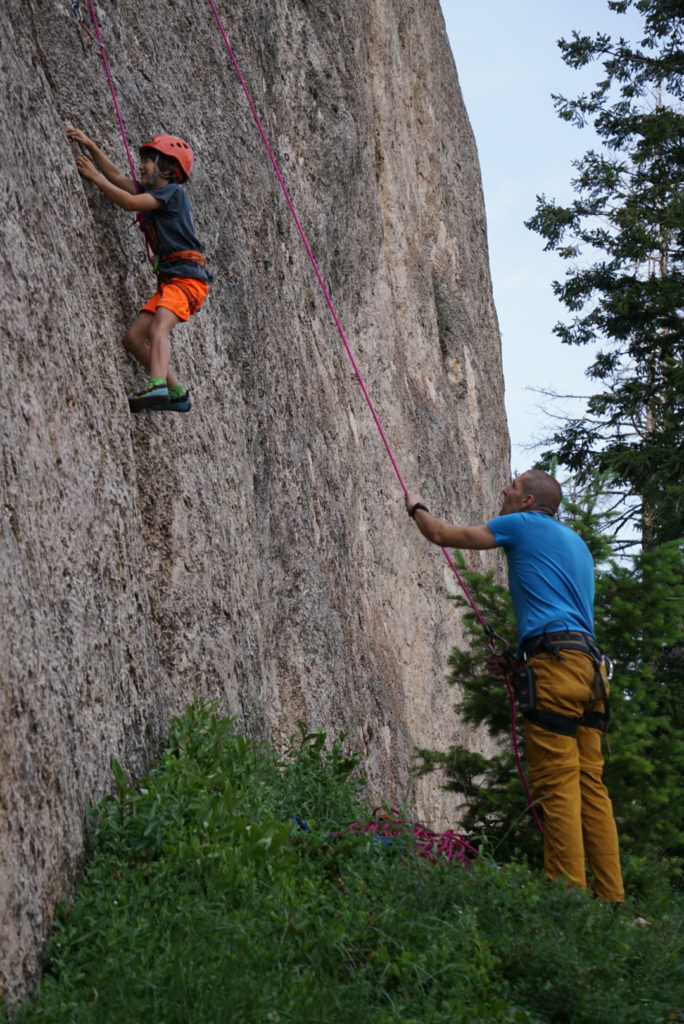 VALHALLA ~
The 2nd day’s main goal (along with more project shopping), was Cocaine Rodeo, one of the few five-star 12a’s we’d yet to touch.  The hike was a good deal shorter (estimated family hiking time = 50 minutes.)  After warming up on the super fun Heroin Hoedown 11a, we got down to business.  CragDaddy onsighted like a boss!  I unfortunately blew my flash by getting sucked into his tall man beta at the 2nd bolt, but was wisely told to come back down, wait a few minutes, and start again.  I did my own thing the next go and got through, and with the CragDaddy beta hose spraying me down for the rest of the route, the next go send came easily enough…although I did get stalled out for a hot minute in the middle, as the big mono move was NOT a sure thing!  (Had I not been on point, I probably woulda hung!)

Also worth mentioning from Day 2 –Dicken’s Cider 12c and Last Dance with Mary Jane 11b/c.  After waiting out a freak hailstorm in the middle of the day, we attacked both of these in the afternoon.  I was psyched to nab the flash on the latter, but the former kicked both of our butts.  Great movement on some really cool holds, but didn’t feel doable for a short term trip.

If you’ve followed us at all on here or social media, you are probably aware that in addition to being climbers, we  are certified nature dorks.  One of our favorite things to do on any hike is to identify any flora/fauna that we see, then go home and draw it in our nature notebook.  We were looking forward to being in a new environment with new critters and wildflowers to observe.  In fact, my 8 year old has such an exciting memory of us stumbling upon a moose on one of our hikes here in 2015, that he said the one thing he absolutely wanted to see was another moose.  And, wouldn’t you know on our hike out Day 1 from FCR, we almost literally ran smack dab into a mama moose with her “teenager” looking calf!  We kept our distance, but they didn’t seem bothered by us in the slightest.  We shared the trail with them for at least 5-10 minutes, until they finally got tired of us following them and loped down off trail into the meadows below.  Amazing experience, and one that I hope both kiddos will remember (at least via photos) for the rest of their lives. 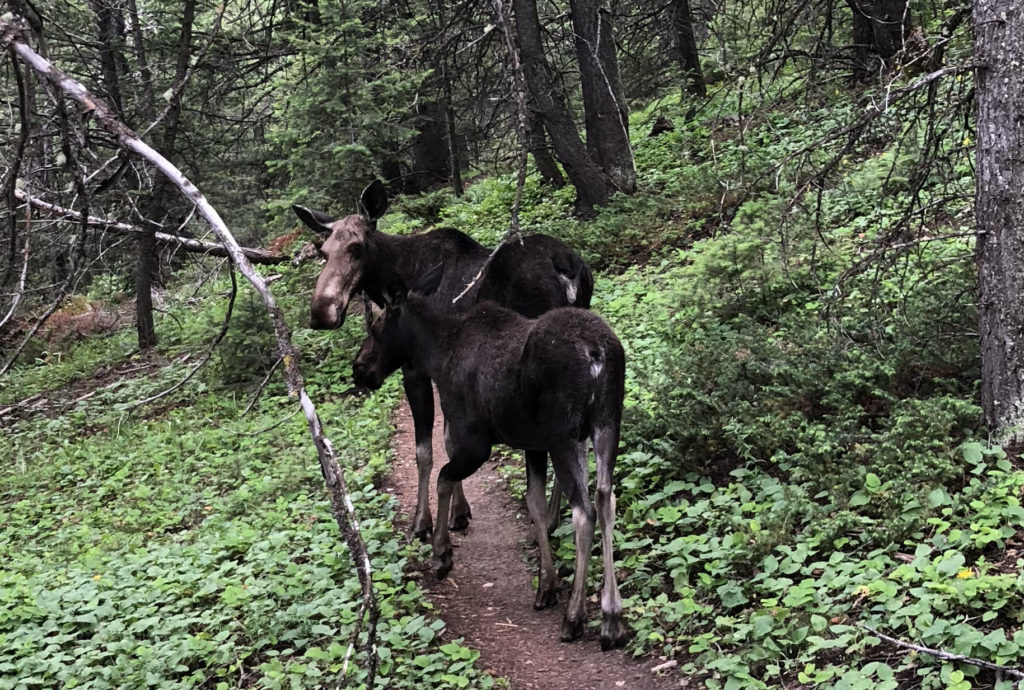 There are moose on the loose!

Part 1 = done!  Stay tuned for our adventures at the Superratic Wall coming up next!